Pneumatic Artificial Muscles (PAM) are a specific type of pneumatic actuators that work very similarly to the human muscle. They are contractile devices driven by pressurized air. Usually mounted in pairs, they consist of an internal bladder covered by a braided mesh shell attached at either end that transmits the effort. The first pneumatic artificial muscle is attributed to J.L. MC Kibben, it was used in the 50’s in an orthopedic tool for polio patients. Since then, PAMs are widely used in the development of robotic manipulators especially in the medical domain, such as orthopedic devices and rehabilitation robots as they possess interesting qualities mainly their high strength, low cost, intrinsic safety and compliance. Yet, their highly nonlinear dynamics, difficulty to modelling and time varying properties impose a very challenging control issue to classical control techniques.

Sliding mode control is a form of variable structure control having the ability to handle parameter variations as well as disturbances for nonlinear systems. This feature makes it an ideal control technique for PAMs driven structures. Though, one of the problems associated with sliding mode control techniques is chattering phenomenon, which is a natural byproduct of the sliding mode approach due to high frequency commutation across the sliding surface. A lot of solutions to attenuate this phenomenon are proposed in the literature [1].

Most of researches in the literature, for position control and trajectory tracking of PAMs driven structures using sliding mode technique [2]–[5] have limited their scope to continuous time sliding mode control. Besides, with the increasing use of computers and digital systems, the implementation of the designed control laws is almost exclusively done using digital systems such as microcontrollers. Therefore, the practical implementation of control laws based on continuous time models on digital systems directly implies not only degradation of control performance but instability in sometimes [6]. It should be noted that the information on the system, in this case,  is available at discrete instants and thus the control signal is only updated at these instants. Hence, it is strongly recommended to develop control laws in discrete time. Considerable efforts have been put in the study of the concepts of discrete sliding mode control (DSMC) during the last 30 years ([6]–[9] and references therein) .

The basic principle of sliding mode control technique is to drive the system’s state onto a predefined hyperplane surface on which it will commutate. One way to achieve this is using the reaching law approach, in which the required evolution of the sliding variable is first proposed, then a control law ensuring that the variables change as specified is determined [10]. The concept of reaching law was initially proposed in continuous time by Gao and Hung [11], then extended to discrete time [12], [13]. Since then, a lot of researches proposed novel reaching laws, for example, we can cite [9], [10], [14]–[16] and many others. Still, the original approach [12] is very popular. The reaching law approach is a simple and effective scheme for the design of DSMC where the dynamic quality of the sliding movement can be improved [17].  Therefore, in this paper, and after establishing a discrete time model for the PAM arm robot, we will first apply the original reaching law approach to design a classical DSMC controller, then improve the control performance by modifying the original reaching and making it adaptive in order to improve convergence speed and reduce chattering. Control performance is evaluated in both regulation and trajectory tracking control tasks.

An anthropomorphic arm prototype driven by PAM is available within our robotics laboratory at the Center of Development of Advanced Technologies (CDTA), illustrated in Fig. 1. The robot arm comprises three revolute joints which are the base, the shoulder and the elbow joints respectively. 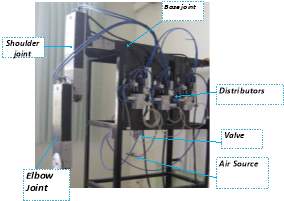 Each joint is driven by a couple of artificial muscles mounted in antagonism that are initially inflated at the pressure P0. Antagonistic action generates a moment resulting in a rotational motion of the associated joint produced by a pressure variation in each muscle. The motion principle is shown in Fig. 2.

Mathematically, the generalized dynamic model for an n-link robot manipulator can be described by a nonlinear differential equation of the form:

is a (nx1) vector of centrifugal and Coriolis forces,

is a (nx1) vector of gravitational force,

angular acceleration and u is a (nx1) control torque vector.

For our robot manipulator driven by PAMs, the value of     n = 2 since the base joint is fixed. We notice that the above dynamic equation given in (1) is highly nonlinear and consists of inertia loading, coupling Coriolis and centrifugal reaction between axes. Considering preponderance of the heaviness and viscous rubbing and that the inertia matrix M(

In the framework of linear approximation, (2) may be approached under the form:

are the estimated gain matrices that will be determined through an identification process. They correspond to

. MATLAB identification toolbox is used to approach these matrices. In fact, based on observation of input/output signals obtained through several experiments on the PAM robot manipulator, we can estimate the dynamic coefficients of matrices A1, A0 and B. Therefore, the mathematical model with the closest estimate to the real system for each joint of the robot is given by the following transfer function:

However, due to modeling errors and parameters uncertainties

are not exactly known. Parameter uncertainties are represented as:

are the estimated parameters with variation of intervals

By choosing the state

, the state space form representation for each joint from equation (3) is then given by:

matrices representing system parameters for each joint. xiis a 2×1 state vector and uiis a 2×1 control input vector. i=1,2 is the joint number.

is the sampling period.

Which is similar to the continuous time reaching condition given by:

Sarpturk et al.[20]gave a sufficient reaching condition given in (12) and pointed out that the control law must have upper and lower bounds depending on the distance of the system state to the sliding surface.

Then a suitable control law satisfying (13) will guarantee that the phase trajectories are directed towards the switching surface.

Designing a sliding mode controller based on the reaching law allows to have a good dynamic performance. The reaching law ensures the system to move monotonically toward the switching plane starting from any initial state and cross it in finite time. Once the trajectory has crossed the sliding surface the firt time, it will cross is again in every successive sampling period, resulting in a quasi-sliding mode [22]. However the reaching law is affected by its own parameters and the sampling period.

Considering the system given by (8), to design a DSMC a switching function is first selected as:

Designing a sliding mode controller based on the reaching law allows to have a good dynamic performance. The reaching law ensures the system to move monotonically toward the switching plane starting from any initial state and cross it in finite time. Once the trajectory has crossed the sliding surface the firt time, it will cross is again in every successive sampling period, resulting in a quasi-sliding mode [22]. However the reaching law is affected by its own parameters and the sampling period.

Considering the system given by (8), to design a DSMC a switching function is first selected as:

the tracking error given by

is the desired position or trajectory.

is the sampling period.

From the discrete reaching law given in (16), we notice that the choice of parameter ε and the sampling time τ is very important. The inequality for τ must hold to guarantee the reaching mode and crossing of the system trajectory to the switching plane in finite time [11]. Moreover, the effect of parameter ε is very significant if its value is large as it is multiplied by the discontinuous signum function. But if its value is selected very small, chattering will be reduced, however, the reaching speed of the system will be reduced.  Therefore, a solution is to have an adaptive value of ε time varying. The motion of the system will begin with a large value of ε which will be decreased gradually with the evolution of time to become as small as possible and hence reduce chattering [14].

The discrete original reaching law in (16) can be rewritten as:

Discrete time reaching law satisfy always the reaching condition. The trajectory will move monotonically toward the quasi sliding-mode plane in finite time from any initial state. The value of

will be always close to

=Δ holds, the system movement will enter the switch plane.

However, the condition in order to have a decreasing motion on si(k), is given by [14]:

The sampling time should satisfy:

The adaptive discrete time reaching law is then given by:

For the system described by equation (8), applying the reaching law given by equation (26) yield the following control law:

A.      Stability analysis of the adaptive reaching law

From the reaching condition given in (13), we have:

Hence, the adaptive discrete reaching law satisfies the existence and the reaching of discrete sliding mode.

In this paper, discrete time sliding mode control has been applied to a robotic manipulator driven by pneumatic artificial muscles for position control and trajectory tracking. Reaching law approach was followed in the design of the DSMC laws. Even though this design approach is simple and effective, it is really affected by the choice of the design parameters. An improved adaptive discrete time reaching law based controller was compared to a DSMC controlled based on the original reaching law. In order to eliminate chattering and keep good control performance in terms of speed and time of convergence, tuning of parameters of the reaching law was necessary, which lead to an improved version of the reaching law. As a perspective to this work, we will implement these algorithms on the platform and compare them to classical PID controller for an embedded application [23].

[19] C. Milosavljevic, “General conditions for the existence of a quasi-sliding mode on the switching hyperplane in discrete variable structure systems,” Autom. Remote Control, vol. 46, no. 3, pp. 307–314, 1985.