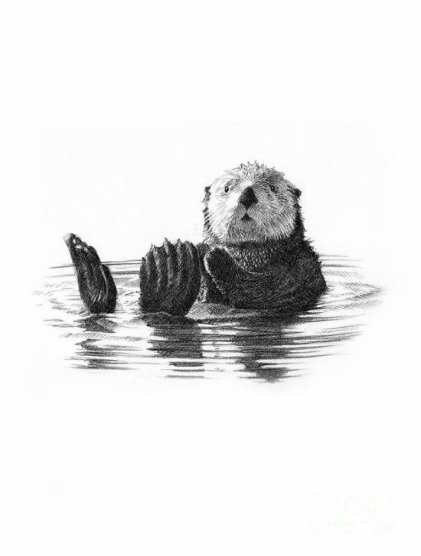 Sea otters originally ranged the Pacific coast from the Northern Islands of Japan to the central Pacific Coast of Baja California, with northern sea otters in Alaska ranging from Cape Yakataga to the Aleutian Islands. They were heavily exploited during the fur trade beginning in 1741, and by 1910 were near globally extirpated aside for thirteen remnant colonies. With protection under the 1911 International Fur Seal Treaty and translocations to extirpated Southeast stocks, Alaska’s Southeast, Southcentral, and Southwest rose by the 1980s. The 1989 Exxon crude oil spill caused more sea otter declines across Alaska, most heavily in Prince William Sound. Currently the Southeast and Southcentral stocks show recovery, increasing population trends, and regional expansions in the Southeast stock. The Southwest stock is declining and is protected under the Endangered Species Act, with threats believed to be, but not limited to, predation, contamination, disease, harvesting, habitat loss, and food limitations. Sea otters have additional protection under Marine Mammal Protection Act, and the 1911 International Fur Seal Treaty. The recovery plan for the Southwest stock under U.S Fish and Wildlife Service aims to maintain sustainable and ecologically functional populations and reduce threats to decline. Northern sea otter exploitation impacted nearshore community structure through the increase of epibenthic invertebrates, which have since been exploited by fisheries. Increasing sea otter abundance creates competition and conflict with fisheries and native Alaskans, with crabbing and sea urchin hunting the main concerns. Further research and monitoring are needed in all stocks to track population status and assess the impact of present and future threats. 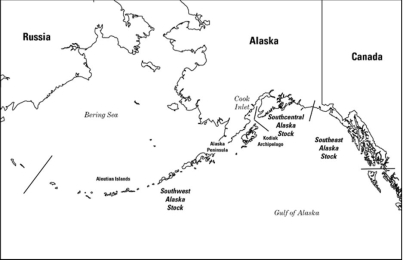 Physical Characteristics. The sea otter is the smallest of the marine mammals containing a dense dark brown insulating fur coat (Kenyon, 1969). Flattened hind feet and tail are used for propulsion and retractable claws on their front feet are used for grooming and eating (Kenyon, 1969). Their long, heavy body is highly adapted for narrow, nearshore environments and they can reach weights and lengths of 45kg and 145cm for males and 33kg and 140cm for females (Kenyon, 1969). Sea otters have flat rounded molars for crushing the external skeletons and shells of their prey (Kenyon, 1969) which consist of mostly epibenthic macroinvertebrates (Simenstad et al., 1978).

Habitat Requirements. Marine sea otters inhabit the open coast of the North Pacific, typically within 54m of the shore (Kenyon, 1969). Areas with rocky shores and bays of kelp beds are favored as these give protection, rest areas, and places to dive for food (Kenyon, 1969).

Behavior. When not diving for food, sea otters are feeding, resting, and grooming while floating on their backs (Kenyon, 1969). Grooming can last several hours a day and is essential for maintaining the waterproofness and insulation of their coat (Kenyon, 1969).

Reproduction. Females become sexually mature at 4 years and have an average annual birth rate of 50%, with two years as the period between births. Gestation lasts for 12-13 months with breeding occurring in all seasons but peaking in the fall (Kenyon, 1969). Births occur on land (Kenyon, 1969).

Southeast. The commercial fur trade left no remnant colonies in Southeast Alaska, thus translocations of 408 animals occurred from 1965-1969 from Prince William Sound and 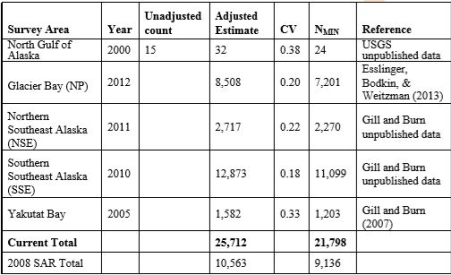 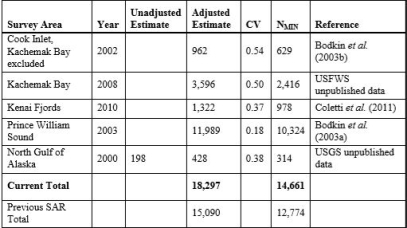 Southwest. Current population estimates per specific region can be found in Figure 4 (Muto et al., 2019). The total abundance count for the Southwest region is 54,771 individuals, which is slightly higher than the previous SAR of 47,676 individuals (Muto et al., 2019). This increase is thought to be due to the inclusion of the Katmai region (Muto et al., 2019). Though the SAR total has increased, overall population trends are decreasing, with populations in the Aleutian Islands decreasing 70% between 1992-2000 to a total count of 2,442 individuals (Doroff, Estes, Tinker, Burn, & Evans, 2003). The southern Alaskan Peninsula decreased 93-94% from 13,900-17,500 in 1986 to 1005 in 2001(Burn & Doroff, 2005). In one range of the northern Alaskan Peninsula decreased 91-94%, and increased 95-385%, leading to an overall decrease of 27-49% (Burn & Doroff, 2005). Along island coastlines of the southern Alaskan Peninsula, sea otter populations declined 63% and along the southern peninsula to the west of Castle Cape, sea otter density declined 35% (Burn & Doroff, 2005). From 2003-2011 Aleutian Island populations have stabilized but show growth rates of 0 and no evidence of recovery (Muto et al., 2019). Within the Kodiak Archipelago, Kamishak Bay in the lower western Cook Inlet, and Alaska Peninsula coast from Castle Cape to Cape Douglass, populations seem stable and possibly increasing (Muto et al., 2019). Overall the Southwest stock has 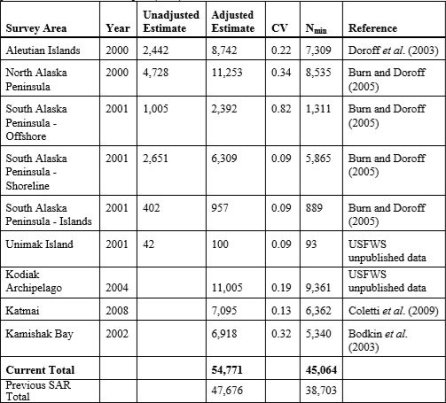 CONFLICT IN SOUTHCENTRAL AND SOUTHEASTERN POPULATIONS

Legislative intervention began in 1911 with the International Fur Seal Treaty that gave protection to sea otter populations from commercial hunting worldwide (Fish & Service, 2013). Under the Marine Mammal Protection Act, Alaskan Natives can take marine mammals so long as hunting is not wasteful and is used for subsistence purposes or for selling authentic handcrafts or clothing (Muto et al., 2019). The same is true under section 10e of the Endangered Species Act, which listed the Southwest population as threatened 2005, however restrictions may increase for threatened stocks if harvesting proves to be a negative impact (Fish & Service, 2013). Though they can hunt sustainably, under the guidelines of the U.S Fish and Wildlife Service (FWS), Alaskan natives are required to partake in mandatory Marking, Tagging, and Reporting Program to track harvesting counts (Fish & Service, 2013). Current legislation focuses on the declining Southwest stock, with threats to decline believed to be increased predation, particularly from killer whales (Orcinus orca), infectious disease, oil spills, contaminants, fishery bycatch, illegal take, subsistence harvest, food limitations, and habitat loss (Fish & Service, 2013). The plan looks specifically at the Western and Eastern Aleutian Islands, South Alaska Peninsula, Bristol Bay, and the Kodiak, Kamishak, Alaska Peninsulas, with goal to reduce threats in the southwest regions so that these areas no longer need to be protected under the ESA (Fish & Service, 2013). The main objectives include: gaining and maintaining sustainable populations within the designated regions, maintaining enough sea otters so that they are contributing functionally to their ecosystems, and reducing/ controlling threats to where the populations can sustainably persist (Fish & Service, 2013). Researching the threats of decline is also a high priority of the plan as the direct cause of decline is unknown (Fish & Service, 2013). This plan is to be implemented over 5 years and will cost 15 million USD. Securing funding is presently a high priority (Fish & Service, 2013).

Overall, the Alaskan northern sea otter populations have increased since exploitation, but continued monitoring is recommended to maintain accurate data and population trajectories. Southeastern and Southcentral northern sea otter stocks have recovered substantially and show to be increasing, however threats with fisheries and Alaskan residents exist and may worsen with increasing sea otter abundances. It is recommended to continue researching these stocks for any signs of conflict- related decline. Additionally, researching the threats facing the Southwest region and monitoring their numbers is pivotal due to their declining trend. Since the most recent population counts comprise data from the early 2000s to 2011, and there is slight variance in the survey methods used, it would be highly recommended to re-revaluate the sites for any disturbances or population changes utilizing the aerial survey method described by Bodkin and Udivetz in 1999 for uniform and comparable results.

Environmental studies is a broad field of study that combines scientific principles, economics, humanities and social science in the study of human interactions with the environment with the aim of addressing complex environmental issues.

Has the Expansion of the Panama Canal Influenced the Competitiveness of ULCV Vessels?

Has the expansion of the Panama Canal influenced the competitiveness of ULCV Vessels?   Source: Pulse, 2016 Abstract In 2006 the Autoridad del Canal de Panamá (ACP) announced the project to exp...

This paper examines existing literature on Water Sensitive Urban Design (WSUD), specifically on the topic of the many interrelated social and institutional barriers which impede the widespread implementation of alternative approaches within the urban water sector....

Traditional Knowledge and Environmental Change in Vanuatu ABSTRACT This thesis investigates the extent to which traditional knowledge is used by local people on North Pentecost (NP) in Vanuatu to a...