An Investigation of Negative and Positive Emotional Contagion in Cows

An emerging area of study in animal welfare research focuses on emotional contagion (Baciadonna et al., 2018). Emotional contagion is said to have occurred when a “strong emotion manifested by an individual triggers a similar emotion and associated behaviour in other individuals around him/her” (Nakahashi and Ohtsuki, 2018, p. 12). For example, research suggests that group-housed animals might experience adverse signals from conspecifics who are frightened or in pain during such things as routine handling procedures, transport or slaughter, or positive signals during such things such as play (Reimert et al., 2013). The existence of emotion contagion has important implications for animals who are group-housed domestic animals – particularly in terms of their welfare, health and performance (Reimert et al., 2013; Baciadonna et al., 2018). Certainly, “knowledge about the primary modalities that livestock species use to perceive emotional cues from conspecifics…would help us to better comply with their emotional needs and thus provide them with a better quality of life.” (Baciadonna et al., 2018, p.4)

A limited number of studies have been conducted on emotional contagion and its effects on the welfare of a group, despite the fact that this phenomenon might have a significant impact on animal wellbeing (Baciadonna et al., 2018). Emotions are accompanied by behavioural, cognitive and neurophysiological responses which can be measured ((Reimert et al., 2017). Ear and tail postures and salivary cortisol have been used to investigate indicators of emotional contagion in the conspecifics of pigs (Reimert et al., 2013, 2017). Evidence strongly suggests that ear postures (Proctor and Carder, 2014; de Oliveira and Keeling, 2018; Battini, Agostini and Mattiello, 2019), neck postures (de Oliveira and Keeling, 2018), tail postures (de Oliveira and Keeling, 2018) and eye white percentage (Proctor and Carder, 2015a; Gómez et al., 2018; Battini, Agostini and Mattiello, 2019) can be utilized to study the emotional state of cows. While cortisol levels and olfactory cues have been used to study emotional contagion in cows (Boissy et al., 1998), little work has been done utilizing the physical indicators of eye white percentage, and ear, neck, and tail postures.

This study is adapted from previously conducted research on emotional contagion in pigs (see Reimert et al., 2013, 2017). It will attempt to use ear, neck and tail postures, as well as saliva cortisol measurements in order to measure low/high arousal, positive/negative emotional state as well as the presence of emotional contagion.  It will be conducted over a six-month period. The testing phase of the study will be carried out at a livestock university research centre in Guelph, Ontario, Canada. Subjects will be comprised of 12 dairy cows that will be randomly selected from the research centre’s herd of 100 cows. It should be noted that though cows exercise choice in who they affiliate with most, and though herds suggest the presence of many non-random attachment and avoidance relationships, herds tend to be large integrated communities (Marino and Allen, 2017). Thus, it is hoped that randomly selecting the research participants will not cause undo stress.

One month prior to experimentation, the group of 12 randomly selected cows will be randomly divided into two groups of six animals, with each group being composed of two test animals and six conspecifics/control animals. Cows will be identified by a large number on their back using non-toxic spray (de Oliveira and Keeling, 2018). Prior to the test period, test cows will be brought in pairs to the rewarding pen to explore for 15 minutes for two weeks prior to the start of the experiment to avoid novelty stress (Reimert et al., 2013). Following the two weeks of habituation of the test cows, two test cows in each pen will be exposed daily to a positive treatment and a negative treatment over a course of two weeks (see Reimert et al., 2017). The time of treatment will be varied during a 09:00 – 17:00 day as will the order of the positive and negative treatments. The treatments will not operate outside the normal routine activities of the farm (de Oliveira and Keeling, 2018). The positive treatment will consist of paired cows being given five-minutes of access to an enriched pen with high value food. The negative treatment will consist of social isolation of each of the two test cows in a barren environment combined with negative handling (e.g. restraint and loud noises) (Reimert et al., 2017). During the two-week period of testing the pen mates of the test cows will not be taken to the test pens, and therefore will be naïve to the two different test stimuli.

An ethogram (see Figure 1) derived from work previously done on the ear, neck an tail positions of cows (see de Oliveira and Keeling, 2018) will be used to assist in scoring the behaviours of the test and naïve cows before the test cows leave for treatment, while the test cows are in the treatment situation, and when the test cows return to the naïve cows in the home pen.

Video recording will be the medium used to record all observable behaviour (Martin and Bateson, 2007). Focal sampling and continuous recording will be used in order to capture and code the behaviours of interest (Martin and Bateson, 2007; Reimert et al., 2017). We will ensure that both test cows and naïve cows are habituated to the presence of the video camera (as well as the research assistant that will be responsible for leading the cows to and from the pens). Note a different researcher will conduct the negative handling of the cows during the negative treatment. 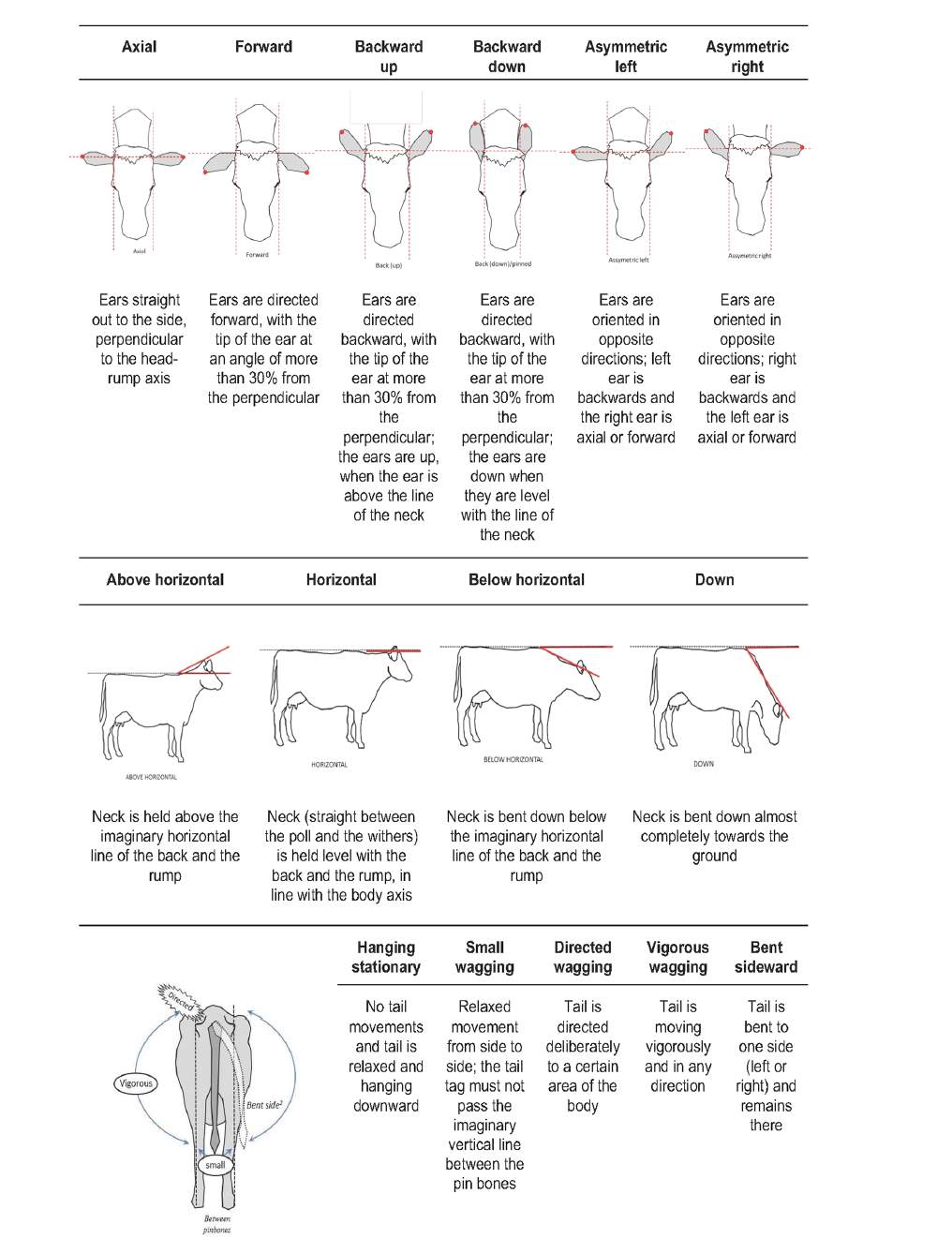 In order to have a secondary, possibly confirmatory measure of arousal in the test and naïve subjects, a physiological measure will be used, namely a measure of saliva cortisol.  The collection of salivary cortisol is a less invasive and easy way to collect cortisol before and after an imposed stress (Negrão et al., 2004). Salivary sampling has been found to be a reliable option when studying cortisol (Negrão et al., 2004). Saliva will be collected from both the test and naïve cows with a synthetic swap commonly used to measure cortisol levels (Gómez et al., 2018).  This will be done before the cows leave the home pen and upon their return. Both test and naïve cows will be tested by the same research assistant that leads them to/from the pens.

Analysis of both behavioural indicators and salivary cortisol levels will be conducted during months four through six.

Though this study is a duplication of previous work on emotional contagion in pigs (Reimert et al., 2013, 2017), it attempts to use fewer animals than in these previous studies, for a shorter test period and, where possible, uses less invasive test procedures. It will only use the number of animals necessary to ensure scientific validity (Martin and Bateson, 2007) and in order to ensure that the number of subjects will allow analysis that is statistically powerful (see for example Proctor and Carder, 2014, 2015b) and produces reliable results (Martin and Bateson, 2007).

This study will apply to University of Guelph’s (UOG) Animal Care Committee in keeping with UOG Care Policy and Procedures, provincial legislation and regulations of the Animals for Research Act and national guidelines and policies of  The Canadian Council on Animal Care.

Within the past two decades, the rise of nanotechnology has provided various technological and industrial sectors with avenues for significant growth and improvements to existing practices. With the ...

In this study, we investigated the in situ distribution of Tulasnella spp. associated with the critically endangered Australian orchid Diuris fragrantissima....

Toxicity and Autoactivation of Baits

This project aimed to test the toxicity/autoactivation of rat baits in the yeast and to find the minimum concentration of 3-AT (3-amino-s-triole) at which it inhibits the HIS3 gene....