Orphan genes are the genes, that doesn’t have any comparable homologues in other lineages. In other words, genes can be called orphan when they are unique to a species (or in some cases unique to a taxon). Proteins from these genes are produced in significant amount and recently found to be important even essential for some species, which made it difficult to overlook their contribution (Li, Foster et al. 2009). However, lack of sequence similarity and unfamiliar origin making the search for their functionality really difficult (Toll-Riera, Bosch et al. 2009). Fortunately, as the next generation of sequencing making its way, we have a huge online resource available publicly that can provide assistance in this pursuit. In this short essay, I will try to use 7 popular papers on one of the popular and well-known plant orphan gene, qua-quine starch, as an example to show how bioinformatics tools and databases may help us investigating their functions.

According to Arendsee et al, qua-quine starch (QQS), is the first plant orphan gene that researchers were able to determine a biochemically characterized function (Arendsee, Li et al. 2014). The research team was trying to expand their perception of Arabidopsis starch metabolic pathway and in the process, knocked out one of the starch synthase gene SS3 (Li, Foster et al. 2009). Nevertheless, even in the absence of a starch synthase gene, to their surprise, the group found more starch content in the knockout mutant. The knocking out not only changed AtSS3 transcript level, it also influenced expression of other transcripts in the mutants. Among the genes with altered transcript levels was At3g30720, later named QQS (qua-quine starch), was noteworthy from its expression and functional point of view.

The observation proliferation of starch content in Atss3 mutant initially convinced the researchers to conclude QQS as a potential component of starch metabolism (Li, Foster et al. 2009). This remarkable discovery generated interest in many researchers in the same field and resulted in many subsequent scientific studies. Some Bioinformatics tools and databases particularly helped them with their search to take the research into the next level.

Here is a short list of those tools and databases:

In many steps of QQS research, researchers relied on BLAST libraries. Arendsee, Li et al. (2014) used protein BLAST to establish a phylostratigraph of the protein-coding genes of A. thaliana (Arendsee, Li et al. 2014). Protein Blast program, when provided with a protein query, returns with the most similar protein sequences from the protein database that the user specifies. The general approach they used is selection of hierarchical taxonomic groups ascending from the focal species, and for each gene find the oldest  taxon in which it has a homolog (Domazet-Lošo, Brajković et al. 2007). By describing the characteristics of increasingly ancient phylostrata, the path from genomic noise to mature protein is exposed (Figure 1). This helped the group understand distribution of genes origin, helped researchers to take one step closer understanding genes development over time.

In 2015, Li et al, used The BLink algorithm  identifies 1155 orphan genes in Arabidopsis that included 30 mitochondrial genes (Li and Wurtele 2015). In addition, the group also identified 839 genes using BLink that are unique to A. thaliana and A. lyrata only but not identifiable outside of the Arabidopsis genus; these genes they referred as clade-specific genes or genus-specific genes (Li and Wurtele 2015). (NCBI, http://www.ncbi.nlm.nih.gov/ sutils/blink.cgi?mode=query). Orphan genes length were also predicted by NCBI Blink in the same study (Figure 2) (Li and Wurtele 2015). This gave the research group an opportunity to better understand genes maturation and evolution. The QQS research group, searched for QQS-like protein in patented protein sequence database with partial QQS sequence in order to discover which proteins QQS interacts with. Learning QQS’s partners will be a massive advancement in exploring its molecular basis and activity. To do this, they also filtered the result with some additional conditions like the sequence must belong to plants and should have certain amount of amino acid sequence to make their search more useful (Qi, Zheng et al. 2018). 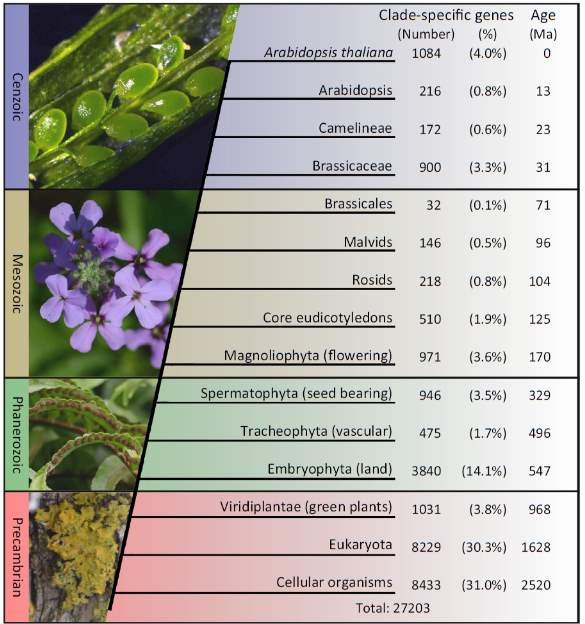 Figure 1: Age stratification of all genes in Arabidopsis thaliana. Each gene is assigned to the oldest clade (or ‘phylostratum’) that contains a homolog, as inferred by a protein-BLAST of each A. thaliana gene against a selected set of genomes with a threshold e value of 10-5 (Arendsee, Li et al. 2014). 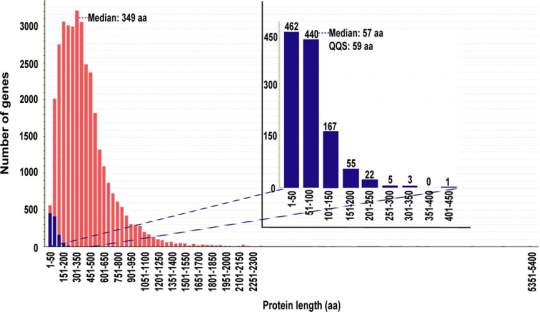 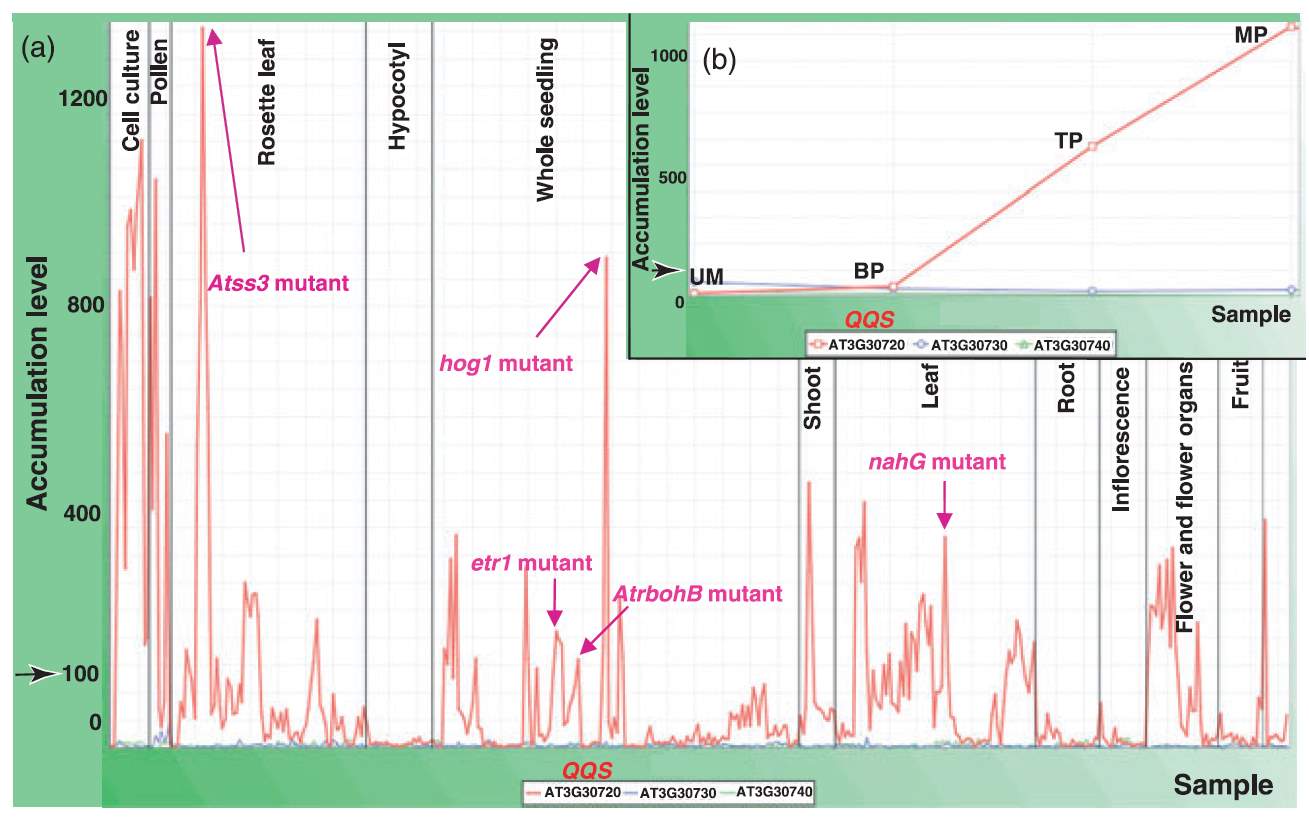 Figure 3: Accumulation of QQS RNA. Each point on the x axis represents a publicly available mRNA transcriptomics profiling data sample for a given experimental condition (Li et al., 2007). The y axis represents the normalized expression level for selected genes. The mean transcript accumulation level for each chip is normalized to a value of 100. The data were visualized using MetaOmGraph (a) QQS (At3g30720, red line) has a complex pattern of RNA accumulation across a wide variety of experimental conditions. (b) QQS RNA accumulation is increased during pollen maturation.

Li et al (2014) predicted protein structural classes for Arabidopsis thaliana proteins with the data retrieved from the TAIR website. Which produce a very informative figure containing important structural features of Arabidopsis thaliana according to phylostratum. This representation provides them with valuable insights with protein structure evolution and functionality. The group used the TAIR10 genome release Helped them in identifying 1155 orphan genes in Arabidopsis 839 genes can be identified using BLink that are unique to only A. thaliana and A. lyrate. (https://www.arabidopsis.org/download/index-auto.jsp?dir=%2 Fdownload_files%2FGenes%2FTAIR10_genome_release)

TAIR have many reliable molecular data sets, like AraCyc.  To evaluate the origin of enzymes, we searched the A. thaliana database AraCyc one of the most complete sets of metabolic pathways for any organism. AraCyc includes genes encoding catalytic and non-catalytic subunits of enzymes of both core and specialized metabolism. The youngest gene encoding any catalytic subunit appears in the ancient Embryo- phyta phylostratum, and the vast majority can be traced back to a common origin in cellular organisms. Which proved their theory that catalytic protein such as enzymes takes longer periods for evolution. (release 11.5, https://www.arabidopsis.org/biocyc/),

TAIR also has a seeds and germplasm resource database that provides researchers with diverse seed and other stocks of Arabidopsis thaliana and related species. The facility is known as ABRC (Arabidopsis Biological Resource Center). Li et al, acquired different seeds and germplasm from ABRC for their experimental trials. For example, They used NF-YC4 knockout line of SALK_032163 and Homozygous ABRC QQS knockout line CS907367 to figure out QQS’s interaction with NF-YC4.(Li, Zheng et al. 2015). The QQS team also used Predictions are based on a search against the SCOP (Structural Classification of Proteins) database, which we retrieved from the TAIR website to observe Arabidopsis thaliana secondary structures

These are the popular bioinformatic tools and databases that used frequently in the above mentioned 7 research papers. Most of these data are already available through online resources made available by previous researchers and most of the software used here are free to use. It is very hard to imagine this much progress in orphan gene research without these tool and data resources.

THE INFLUENCE OF DIFFERENT TIME (MIN) AND HEATING TEMPERATUES (°C) OF WATER ON VITAMIN C AND SUGAR ABUNDANCE IN RED DELICIOUS APPLES (100G) ABSTRACT Fruits as we all know are crucial to maintaining a...