Cyanide (CN–) is a carbon-nitrogen toxic radical with a strong affinity for metals, which makes it favourable as a lixiviant for metal leaching and as an agent for metal finishing. Therefore, is usually generated in metallurgical operations and found predominantly in industrial effluents with a concentration between 0,01 and 10mg/L of total cyanide (Wild et al. 1994). However, in some specific operations at electroplating or metal finishing plants effluents may contain from 10,000 to 30,000 mg/L (Ganczarczyk et al. 1985).

Cyanide treatment is a field with many different processes, not only with its advantages and disadvantages, but also with different cyanide species removals, efficiencies, costs, time, resources and some of them with further treatment required. That’s because it’s an element that has a wide variety of organic and inorganic compounds (Ebbs 2004).

It’s critical to define the class of cyanide that is to be removed during a treatment process. The three classes of cyanide are: total cyanide, weak acid dissociable cyanide (WAD) and free cyanide.

So, as to make an organised, clear and complete classification, the different processes will be divided in Chemical, Physical and Biological Treatments.

Over the past decade, biological cyanide treatment processes have become increasingly widespread in the mining industry due to their relatively low cost and ability to produce high-quality effluent (Fleming et al. 2015).

The biological oxidation is effective for free cyanide (HCN, CN–) and cyanide that is weakly bonded to metals. Oxidation of cyanide, thiocyanate, ammonia and nitrite occurs simultaneously in aerobic systems, within a water temperature of approximately 10 to 15oC. Cyanide oxidation reaction is:

Cyanide is oxidized to ammonia. Then, the thiocyanate is oxidised:

In this reaction, thiocyanate is oxidized to ammonia and sulphate, which generate nitrate according to the following reactions:

Finally, after the aerobic treatment, anaerobic denitrification with an organic carbon source (methanol or ethanol) is used to remove nitrate and residual nitrites to inert nitrogen gas, producing 0.55 grams of sludge per gram of nitrate removed:

Destruction of cyanide by microorganisms (bacteria or fungus) from tailings solutions and other process wastewaters is an efficient alternative to chemical and physical processes (Patil & Paknikar 2000). Although they have a higher capital cost, are significantly cheaper in terms of operating cost. However, this processes usually have high efficiency in long-term. As we can see in figure 2, cyanide removal reaches a 70% efficiency after 72h of treatment. At this point, the efficiency doesn’t increase significative (White et al. 2000). 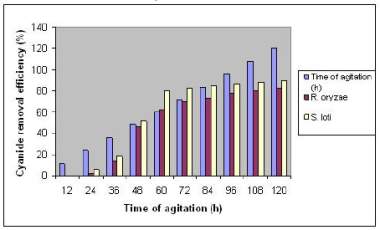 There are four general pathways for bioremoval of cyanide: hydrolytic, oxidative and reductive (Ebbs, 2004). These processes will be described briefly because are often used to degrade HCN, an organic form of cyanide.

Hydrolytic reactions are catalysed by enzymes. Cyanide hydratase and cyanidase act on HCN whereas other enzymes such as nitrile hydratase or nitrilase act on nitriles.

The cyanide hydratase activity is induced by low concentrations of cyanide in fungi plants, resulting an irreversible conversion of cyanide into formamide followed by a conversion into CO2 and NH3.

Nitrilases and nitrile hydratases convert both aliphatic and aromatic nitriles to acid and amide, respectively.

Cyanide monooxygenase converts cyanide to cyanate, which is catalysed by cyanise resulting in the conversion of cyanate to ammonia and carbon dioxide.

K. oxytoca is able to degrade cyanide compounds to methane and ammonia, with a two-step mechanism. However, this is not common and enzyme required for such pathway is found very few species (Dash et al. 2009) .

Bioaugmentation is used to take advantage of the benefits of bioremediation. Bioaugmentation consist on adding microorganism into a certain surface for biodegrading a contaminant. In 2008, this process was used to a full-scale cokes wastewaters of 1280 m3 that contained about 14 mg/L of ferric cyanide (Park et al. 2008). Cryptococcus humicolus was applied and enriched for two months with a supply of glucose, KNC and other nutrients. However, this process showed poor removal efficiency than expected (<50%) due to slow biodegradation rate and lack of organic carbon sources in the wastewater. Therefore, bioaugmentation in full-scale need further studies to solve operating problems and increase efficiency (Park et al., 2008).

Dilution is cheap and simple, often used as a back-up method to insure that discharge limits are satisfied (Marsden & House, 2006). This method doesn’t separate or destroy cyanide, as it only consists in combining a toxic cyanide waste with an effluent free of pollutants. Therefore, the total amount of cyanide is not altered but you are able to obtain an effluent with less cyanide concentration, which can be useful and necessary for other treatments (Young et al. 1995).

This process makes solutions more amenable to other recovery and remediation processes thanks to free cyanide which is liberated. This method performs well in concentrated solutions. However, progress is needed to make electrowinning economically viable with high metal recoveries in dilute solutions. Then, direct applications to cyanide remediation may be possible (Young et al. 1995).

Cyanide can be extracted from a water using membranes with either electrodialysis or reverse osmosis, and both of these methods can be used to solutions containing free and metal-complexed cyanide. In electrodialysis, a potential is applied across a membrane permeable with two electrodes. Cyanide, because is negatively charged, will concentrate in the part containing the anode or positive electrode (McNulty & Hoover, 1980). However, in reverse osmosis pressure is applied to a cyanide solution and the water contained in its solution pass through a membrane impermeable to cyanide (Young et al. 1995).

Chemical treatments usually use oxidation to convert cyanide into a less toxic compound (Fleming et al., 2015). There are a lot of treatments capable of reducing the cyanide toxicity. However, treatments that have low efficiency or major environmental drawbacks aren’t going to be reviewed. For example, iron cyanide precipitation method generates waste solids and soluble compounds that may persist for many years (Dzombak et al. 1999). The most currently used and efficient treatments are:

This method is currently in operation at over thirty mine sites worldwide. The primary application is with slurry tailings, but is also effective for the oxidation of free and WAD cyanides (Fleming et al., 2015). With a presence of a soluble copper catalyst, the process utilises SO2 and air to oxidize cyanide to cyanate (OCN–), which is less toxic, at an alkaline pH:

The usage range of SO2 and lime is 3.5 to 5.0 grams per gram of CN– oxidized. As we can see in the schema shown at figure 3 it also requires oxygen, which is supplied by sparging atmospheric air into the agitated reaction vessel. Moreover, a solution of hydrated copper sulphate is added to provide a supplemental catalyst. 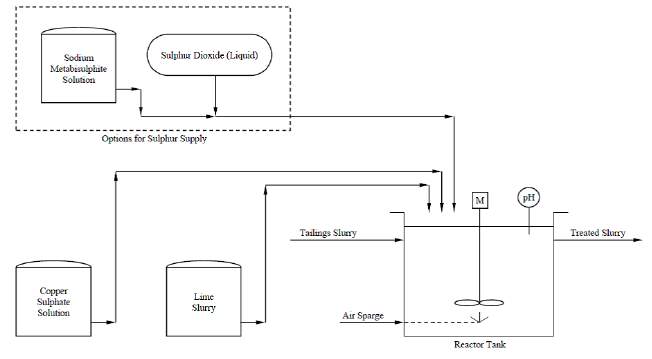 Representative results for solution and slurry treatments are:

In this process, hydrogen peroxide is utilised instead of sulphur dioxide and air, obtaining cyanate and water which limits the build-up of dissolved solids in the solution being treated (Fleming et al. 2015):

The process is applied to treat low to moderate levels of free, WAD and iron cyanides in order to achieve effluents suitable for discharge. H2O2 usage is between 2 and 8 grams per gram of CN– oxidized (Smith et al., 1991). If iron cyanide must also be removed to low levels, lower pH is required to maximize the precipitation of copper-iron-cyanides. Upon completion of the oxidation, metals complexed with cyanide (copper, nickel and zinc) are precipitated as metal-hydroxide compounds (Fleming et al. 2015).

Treatments results of this method are shown in figure 5.

This method is suitable for removing cyanide to low levels when the initial cyanide concentration is already below about 1 to 5 mg/L. Is a simple and effective process, due to activated carbon affinity for many metal-cyanide compounds (Akcil, 2003). Furthermore, is convenient for installation at sites where activated carbon is used for precious metals recovery. The reason behind is when the carbon is no longer suitable for water treatment, it can be used for other purposes such as thermal regeneration (Fleming et al. 2015).

Representative results are shown in figure 6:

The word Medical refers to preventing or treating injuries or illnesses, relating to the study or practice of medicine. Medical care involves caring for a patient and helping them through their journey to recovery.

The process of ensuring immunity to individuals by the administration of vaccines is known as immunization (WHO, 2010d). Immunization is a proven tool for controlling life-threatening diseases and is ...

This project aims to provide a contribution to better understanding and interpretation of cerebral activity in humans via the improvement of recorded VEP signals....

Use of Hyperbaric Oxygen Therapy in Cutaneous Injury Repair

Studies were reviewed to analyse the physiological and therapeutic effects of hyperbaric oxygen therapy as an adjunctive treatment in the management of cutaneous wounds....