The potential of biomass to be the source for resolution of energy crisis and other valued bio-products have captivated the interest of researchers. The objective is to optimize or develop innovative technologies to overcome the shortcomings of conventional cultivation system. Works of Ahmad A.L (2011) and Campbell P.K (2011)(Ahmad, Yasin, Derek, & Lim, 2011), emphasizes on the importance of mixing for alleviating the productivity of the product. The purpose is to achieve uniform light incoming and proper flow of air throughout the culture. It was found that increasing the frequency of light/dark cycles when combined with high turbulence (increased Reynolds number) improved the productivity of the batch.(Grobbelaar, 1994). This enhancement is accounted by the increased number of resultant metabolites and better mixing of nutrients. 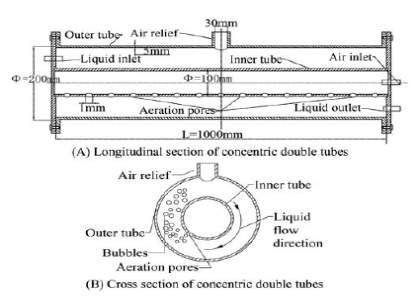 Jang et al (2017) built a concentric double tube with an objective to achieve the above-mentioned requirements. The culture medium was inoculated with Chlorella vulgaris with the cell density of 3×105 cell/ml initially while the starting pH maintained was of 7.5. The temperature of the bioreactor was managed around 28oC. The cultivation system design consists of radially aerated inner tube over the entire length and an outer-tube.

The site of action is between the tubes where mixing and air flow is regulated through the pores. The reactor was monitored for 10 days of daylight using a 53.5 μmol/m2.s illumination. This method of aeration brought out better results by enhancing the swirl flow decay throughout the length of the tube. A steady rate of 10L/minute was maintained for an hour over every other 3 hours. For comparative studies, control systems were setup in which one had air mixing by streams sent in through both its ends and second was the commonly used tubular. 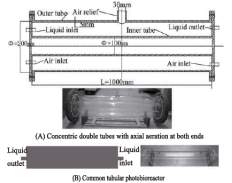 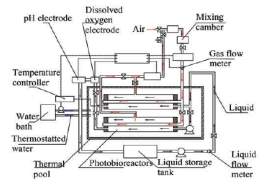 Several parameters were evaluated to analyse the performance of the novel cultivation system:

It was found that tubes aerated axially and radially showed similar production rate for first 4 days while the traditionally used tubular reactor had the least from the beginning. However, for the upcoming days of observation, radially aerated one’s performance was at par with the former under similar conditions. This change in trend can be attributed to successfully regulated method of air circulation, efficient flow and constant swirling of the flow. 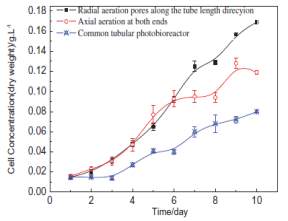 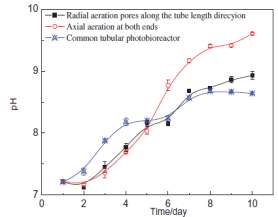 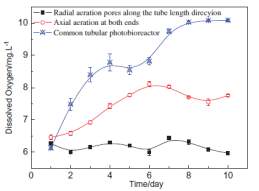 It is evident that low pH favours high productivity for any cultivation system. The pH is monitored by converting the CO2 into carbonic acid by the organisms during their growth period, which is why it is essential that CO2 is available in the culture throughout the production. In the control system where air circulation was stagnant or poorly regulated, the lack of acidity elevated the pH and consequently abated the production (see table 1). This wide transaction in pH range affects the growth. However, radially aerated tubes make this shift smoother and hence the negative effect is minimal.

Shift in concentration of dissolved oxygen:

During the photosynthetic metabolism of microorganisms, oxygen is released as the by product and if not checked, saturates the air. This phenomenon was more prominent in two of the control systems caused by improper ventilation and lack of outlet for oxygen to escape. The solution to this problem is effective air circulation which is achieved in the testing system (see table 1).

Sato T. et al, showed in the results that the alternate light and dark cycles in the reactor facilitated by high velocity combined with constant decaying swirl, pose positive effect on the photosynthesis process. The resultant increase in in biomass can be evidently attributed to the same factor.(Sato, Yamada, & Hirabayashi, 2010).  In addition to that, the diameter of the tubular pipe and the flow velocity also has its effect the cycle frequency (see table 2).

From table 2, it can be claimed that the frequency of cycle is highly dependent on the diameters of the tube. The discussed cultivation system has advantage of higher frequencies over the others which is highly reflected due to aeration available along the entire length.

As the need of the hour give way for more inventive technologies to showcase their contribution, cultivation system based on algal biofilms hold a promising solution which is rarely investigated despite of its undisputable potentials. A biofilm is an organized population of bacteria which has the ability to sustain itself through indigenously produced milieu and attaches itself to a surface(Qureshi, Annous, Ezeji, Karcher, & Maddox, 2005). These biofilms have been converted to systems to create novel cultivation system for microalgae.  The details of the system vary according to the application like the morphology of the surface, means of attachment and design. One of the basis of classifying these cultivation system is the movement of the surface that acts as the site of production. They can be categorized as stationary and rotating biofilm systems. However, in this report stationary binary systems will be studied deeply.

Stationary system is designed such that there is a pump to propel the water continuously over the exterior of the biofilm. The orientation of the plate can be changed for effective inflow of liquid and eventually the biomass gets built up by consuming available CO2 and sunlight (Fig 1). One of the most widely stationary system is Algal Turf Scrubber (ATS). Even though it is commercially used for waste water treatment, it has instilled interest to be used as cultivation system. The attachment is immersed in the furrow ploughed on the intended area and the incessant flow of water is maintained. The dissolved inorganic additives or nutrients will be intakes of biomass building up on the surface and the nutrient depleted stream will leave the system. Since the removal rate of nutrients is high in case of this technique, it has record making values for naturally managed ecosystems (University of Maryland, n.d.).

Jafari et al, used ATS for the production Chlorella vulgaris and has recorded the outcomes of the same. So as to increase the productivity, harvest and efficiency of the system, material with mesh was chosen (Lee et al., 2014). Selection of the attachment material is an integral part of using ATS and it is done based on durability, absorption and the strength with which it can hold on to the microalgal cells. The extend of absorption possible on the material decides the enhancement of productivity. 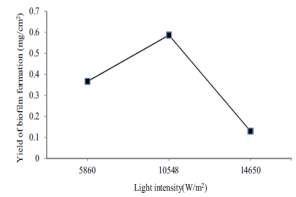 Another deciding factor was the intensity of incoming light.  Being autotrophic, metabolism of cells, photosynthesis and other biochemical process of microorganism will utilize the light. Different light intensities were employed to study the effect and it was found that even though the production rate increased gradually to 0.6 mg cm-2 at 10,548 W m-2, the biomass couldn’t withstand the intensity of 14,650 Wm-2  which makes it essential to evaluate an optimum light intensity measure at constant rate of aeration (3.66 vvm in this case). This accounts for the limiting action of light in the growth phase of microalgae. 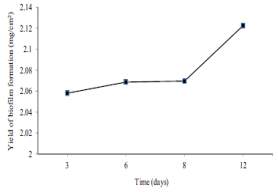 It was also observed that with increase in time, there was a shoot up in the auto-harvesting of the cells between 8th and 12th day which declined after the same.

Their cost effectiveness is enhanced, and usage is maximized by employing it for multipurpose end results like clearing the stream of liquid off excessive inorganic compounds, while growing up high valued end-product biomass. For instance, P.E. D’Aiuto et al. set up ATS to clean the nutrients when water in Florida got loaded with the same as the agricultural water leached into it, and utilized all the remains as fertilizers (D’Aiuto, Patt, Albano, Shatters, & Evens, 2015).

According to the high mass extinction coefficient of microalgae, they need high intensity of light to facilitate their photosynthesis (Xu, Weathers, Xiong, & Liu, 2009)(Posten, 2009). This fact makes uniform intensity of illumination, a necessity to achieve high growth rate. One of the limitations of closed cultivation system is improper distribution of light through the entire culture medium. While all this time it was achieved by striving to achieve higher values of surface to volume ratios resulting in building of massive reactors with high expenses, Alexander Sutor et al. (2014) came up with introducing wireless light emitters inside the bioreactor. The WLEs are selected based on the spectral range of absorption of the desired microalgae.

The power required to run the emitters are drawn from applied electromagnetic field, in our case which is sourced by field coils. 178 kHz was the frequency selected to illuminate WLEs in this study which was just enough so as to not affect the organisms biologically. The coils being Helmholtz coils, are arranged precisely in positions in accordance to achieve the optimum magnetic field. Once the coils are laid down, WLEs are dropped inside the reactor. These are required to be small in size however with maximum achievable frequency and as simple as it can possibly be (see figure 6 and 7). 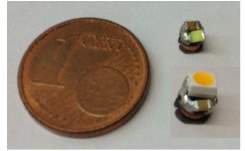 Figure 7: Arrangement of coils and WLEs in bioreactor.

Now the bigger task was to optimize the field coils design to power these WLEs.  The function was tailored to calculate the minimum value which will correspond to better quality of solution.

The objective is to find value of x that will minimize f(x). Suitable algorithms are selected and employed to solve for optimization.

Certain parameters and assumptions were made to solve for optimization equation setup is taken to be axisymmetric (which is true for most of the PBRs) and ampere turns were fixed. The cost of the process was the constant commodity and output was the variable. All this had it be done because it is a difficult to task to set initial parameters in such scenarios. The region of interest (ROI) is well defined according to the desired results and optimizer gets to vary within those boundaries.

The ROI was taken to be 4 cm for PBR of 3 cm radial radius. The result was recorded via a plot of z versus r (see figure 9). 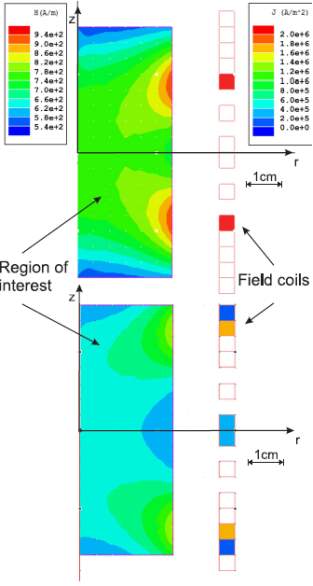 Figure 9: Simulated magnetic field distributions within the region of interest

This method is advantageous for scaling-up of the process as it takes of the pressure to achieve high surface to volume ratio. Consequently, it will result in cost effectiveness of the process and make it more economical. The currently discussed method make illumination available uniformly throughout the medium hence, increasing the conversion of CO2 to carbonic acid. This resulted in a high biomass production of 80% more than the traditional output (see figure 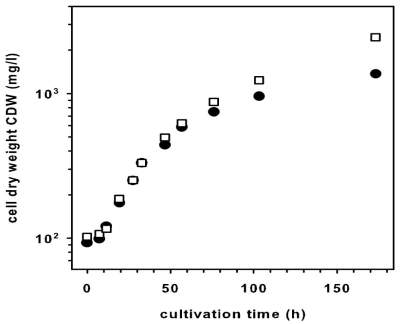 Photo-bioreactors made from plastic bags is an area that arouse enough interest with a hope to be one of the solutions for mass cultivation of microalgae. It is kind of a tubular PBR (TBPR) and like any other TBPR, accessibility of sun rays or artificial light (like in the currently being discussed one) for the growth of the micro-organisms, unit for harvesting the suspended organisms from the culture, proper circulation of gases from inside to outside and vice versa, and a pump that helps in mixing the medium and regulate the gases(Wang, Lan, & Horsman, 2012). 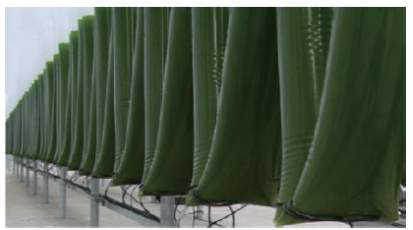 They can be assembled in different orientation like horizontally, vertically or inclined at an angle. For instance, Chun-Yen Chen et al. (Chen, Nagarajan, & Cheah, 2018) used PBRs during the pilot-scale production of Nannochloropsis oceanica CY2. A plastic bioreactor of 5L capacity was used to inoculate and was subjected to tungsten lamp for illumination. The medium was inoculated at room temperature (25 oC) and CO2 flow was maintained at 0.1 vvm and 2% concentration.

From the samples taken at regular intervals, certain parameters were analyzed and following conclusions were derived: 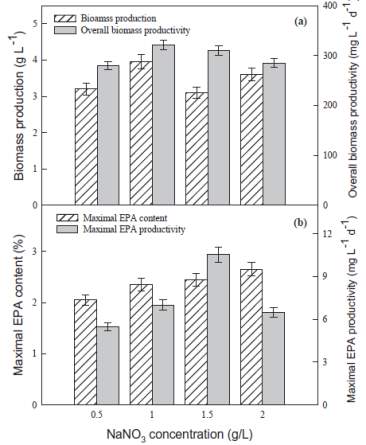