Dermcidin is one of the first responder peptides for defence against bacteria. Dermcidin is a small, 46 armino acid, peptide that folds into an α-helix(1). The α-helix makes 6 copies of itself creating a hexameric helical pore(1). Dermcidin is classified as an antimicrobial peptide that is produced in the sweat glands and secreted through sweat to cover the whole surface of the skin(1). Studies have shown that the dermcidin peptide is able to function optimally in a broad range of pH and salt concentrations that would be found in sweat(2). This shows that sweat plays a significant role in the function and distribution of the peptide. There are two classifications of antimicrobial peptides: cathelicidins and defensins, each of which have similarities in the activity of their antimicrobial properties(3). Cathelicidins are cationic antimicrobial peptides, containing a protected cathelin domain and is a human immune response(4).  Defensins are also cationic antimicrobial peptides but contain 6-8 cysteine residues which make disulfide bridges(5). Defensives can be further categorized into β-defensins, α-defensins, and θ-defensins, β & α-defensins are found in humans. It is the arrangement of the disulfide bridges which determines the categorization of the antimicrobial peptides. Dermcidin does not fit into any of these categories due to its anionic nature, thus it is a unique antimicrobial peptide found on our bodies. This paper will go into details of dermcidin’s mechanism of action to destroy and kill bacterial species. It will also touch upon the current and future research of dermcidin and its properties to create bigger and better antibiotics.

Antimicrobial peptides not only defend against harmful bacteria, but they also keep the peace between bacteria that coexist with humans. Due to the ability of antimicrobial peptides to attack the unique but vital structural components of bacterial membranes, bacteria are unable to produce an antibiotic resistance to antimicrobial peptides(6). Dermcidin’s sole purpose is to destroy the cellular membranes of microbial species and stopping the development of antibiotic resistance in the bacterial species(6). Dermcidin is found to affect a broad-spectrum of bacterial species, all the way from gram-negative to gram-positive(6). More specifically dermcidin plays a huge role in protecting us from the harmful effects of Staphylococcus epidermidis (S. epidermidis) which is a bacterium that is found in the human flora. S. epidermidis is commonly found in infections caused by lacerations of the skin.  Studies have also shown that dermcidin is expressed continuously through the sweat glands, independent from any sort of skin inflammation, or lacerations(7). It is also known that dermcidin can act upon fungal species, parasites and even enveloped viruses(8). There is global increase of infections caused by multi-resistant bacteria, and even an increase in death caused by these infections(9). Dermcidin’s structure and function is under a large investigation to determine its role in creating new antibiotics for multi-resistant bacteria. Studies have also shown through molecular dynamic simulations how dermcidin forcibly stops the growth of Staphylococcus aureus found on the surface of human skin(6). Dermcidin’s role in health and disease and its unique properties are the driving force for this paper.

Antimicrobial peptides are able to target the unique structural features found in microbial membranes, such as the abundant, negatively charge phospholipids.

Interactions with other molecules

Most antimicrobial peptides that are found on our bodies have an overall positive charge. This positive charge assists them in their ability to bind to the abundant phospholipids found in bacterial cells(1). As for Dermcidin the overall charge of the antimicrobial peptide is negative. For dermcidin to be able to interact with the highly negative cell wall of bacteria it interacts with the zinc ions found in 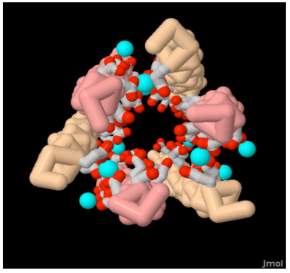 Figure  : Structure of dermcidin (PDB:2ymk) showing the interaction of the zinc ions (blue) with the negatively charged amino acids (red)(1). 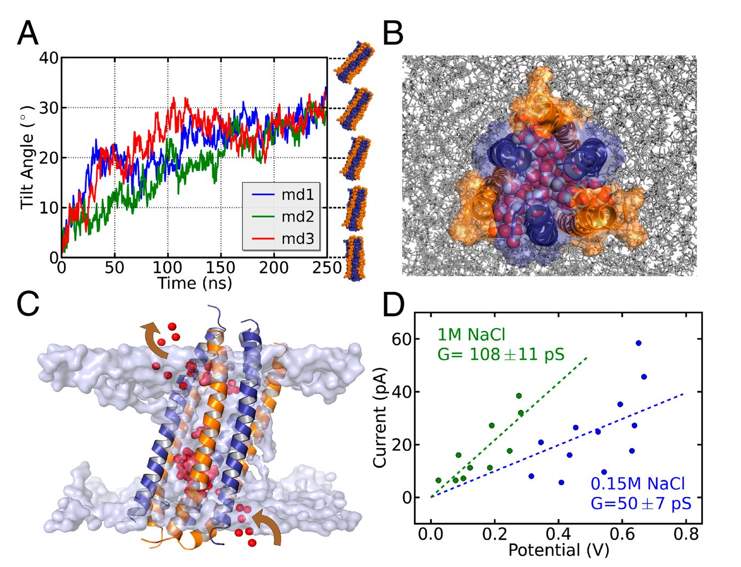 Figure   : Figure  shows the information given by computational electrophysiology and molecular dynamics simulations. A) Shows dermcidin’s tilt in three 250-ns single bilayer molecular dynamics simulations. B) Shows that water distributions (red/white) in and around dermcidin, view shown along the channel axis. C) Shows that path in which a Cl– ion (red) passes through the channel, arrows showing the direction of passage. D) Shows that data obtained from computational electrophysiology simulations (6).

One method that can be used to determine the conditions under which the protein of interest is expressed is through immunohistochemistry. Immunohistochemistry is a technique that uses specific antibodies that will specifically bind to a target antigen, this allows for the detection of specific proteins in tissues(12). A study was performed using immunohistochemistry on healthy human skin, along with tissues affected by inflammatory skin diseases, such as psoriasis and lichen planus to determine if dermcidin is an inducible protein(7). The results from this study showed that dermcidin was constantly produced in the sweat glands, and was not induced by inflammatory skin diseases(7). 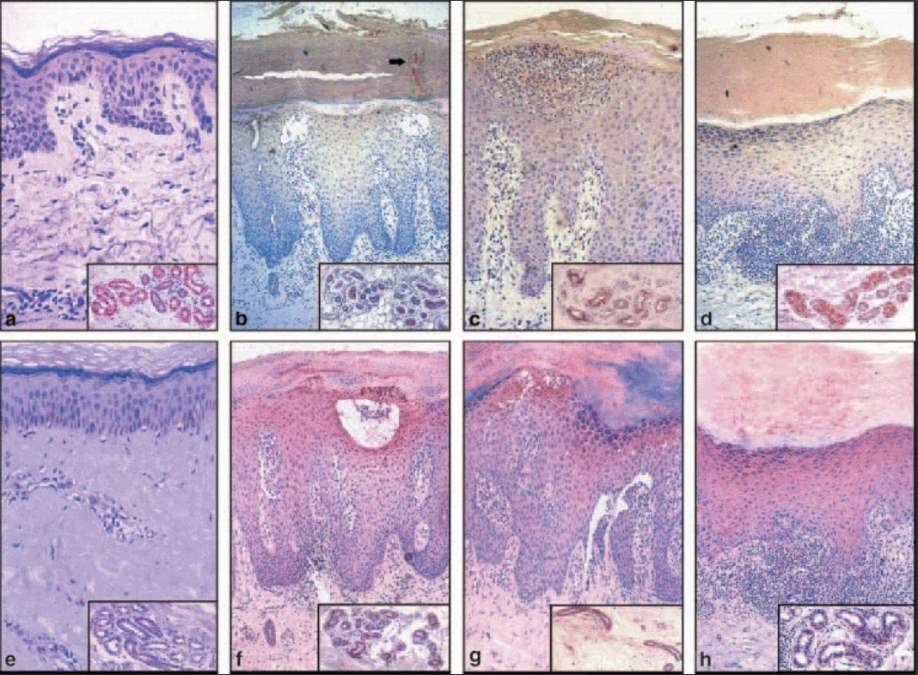