The management of Indianmeal moth inretail houses, bakeries, mills, food industries and other stored structures has mostly depended on the application of conventional chemical pesticides (Alam et al., 2015; Tuncbilek et al., 2011). Several chemical pesticide labels have either been eliminated or under review because they leave harmful residues in food or in the environment, or insects have developed resistance to them (Phillips and Throne 2010).  The use of methyl bromide, one of the most effective IPM tools in the management of stored product pests has been banned or restricted in several countries under the United Nations Environmental Protection (UNEP) Montreal protocol because of its ozone depleting property (Ayvaz et al., 2008; Mbata et al., 2005a; Thomas, 1996). Phosphine is an alternative fumigant to methyl bromide but presents the risk of poisoning to workers and can cause the fire (Mbata et al., 2005b; Valizadegan et al., 2012). Moreover, it has been reported that diapausing larvae of P. interpunctella were resistant to the shorter exposure of phosphine (Bell 1997). Additionally, diapausing larvae are more tolerant to heat (Sardesai, 1972), low pressure (Mbata et al., 2012) and methyl bromide (Johnson et al., 2003) than non-diapausing larvae of Indianmeal moth. Furthermore, pesticides may not be effective against residual populations of Indianmeal moth that hide in the corners and crevices of the storage and processing facilities. Thus, the moths can easily build up populations when warehouses are restocked.

Recently, biological control strategies such as the use of predators, parasitoids and pathogens are in focus as integrated pest management (IPM) tools for the management of stored product pests over conventional chemical pesticides (Eliopoulos et al., 2002; Scholler et al., 1997). These biological control strategies are not harmful to non-target species and minimize the use of chemical pesticides and their impact on environment (Lacey et al., 2001).

H. hebetor is among the parasitoids that have been investigated for their potentials as IPM tools in the management of postharvest storage moths (Ahmed et al., 1985; Brower and Press, 1990; Cline, 1989; Cline et al., 1984, Cline and Press, 1990; LeCato et al., 1977; Press et al., 1974, 1982; Ullyet, 1945). Cline et al., (1984) and Cline and Press, (1990) observed a significant reduction in the level of almond moth infestation in small experimental packages of corn meal and raisins with introduction of H. hebetor. In laboratory tests, H. hebetor effected 97% reduction of almond moth residual population in food debris (Press et al., 1982).  H. hebetor has the potential to be integrated with other biological control agents, such as entomopathogenic nematodes, for the management of populations of stored product moths (Mbata and Shapiro-Ilan 2005, 2010).

H. hebetor has some good characteristics, which include short developmental period of about 11 days at optimal conditions, high fecundity of females as a female could lay up to 100 eggs, the ability of adults to survive for long period of starvation, and ability to remain active in certain winter conditions (Alam et al., 2015; Benson, 1973; Chen et al., 2011). Additionally, H. hebetor has been found to penetrate commodity bags and exert significant host mortality (Adarkwah et al., 2014; Grieshop et al., 2006). These excellent traits nothwithstanding, it is difficult to rear large numbers of H. hebetor for mass, inundative or augmentative release in IPM programs. The major challenge in mass rearing of H. hebetor derives from the fact that the parasitoid has a narrow window to envernomize and lay eggs on its hosts, which are late instars of pyralids that pupates within three days at optimum conditions (Akinkurolere et al., 2009). For natural enemies to become widely adopted in IPM programs, methods of rearing them in large populations have to be developed. So far, this has become limiting in the adoption of H. hebetor as an IPM tool (Coudron et al., 2007; Chen et al., 2011).

At present, the only method known for the reproduction of H. hebetor is to rear them on larvae of stored product moths (Alam et al., 2015; Borzoui et al., 2016; Ghimire and Phillips, 2010). This study investigated the effect of the physiological state of the larval P. interpunctella host, diapausing or non-diapausing, on progeny production by H. hebetor.

Culture of P. interpunctella was maintained in a 500 mL glass jars on mixed artificial diet of corn meal, chick laying eggs, chick starter mash, glycerol and yeast at a volumetric ratio of 4: 2: 2: 1: 1 at 28 ± 1.5 °C temperature, 70 ± 5% relative humidity and 16 h photoperiod (Mbata and Shapiro-Ilan, 2010). Ten days old (3rd instar) Plodia interpunctella larvae were allowed to enter diapause by transferring them from 28 ± 1.5 °C to 14 ± 1.5 °C (Mbata, 1987). Cultures of diapausing and non-diapausing larvae were subsequently maintained at 14 ± 5 °C and 28 ± 1.5 °C temperatures, respectively.  For this experiment, 20-days non-diapausing and 40-days diapausing larvae were used since both larval types were at the last instar stage within these time frames.

The culture of H. hebetor used in this study was collected in 2001 from a laboratory colonies at United States Department of Agriculture, Agricultural Research Service(USDA ARS) Center for Grain and Animal Health Research, Manhattan, KS 66502, and since had been maintained at the Department of Biology, Fort Valley State University. The parasitoid was reared on last instar of P. interpunctella in 1000 mL of rearing jars at 28 ± 1.5 °C, 16 h: 8h (L : D) and 70 ± 5% rh (Mbata and Shapiro-Ilan, 2010).

In order to determine the effect of host density of diapausing and non-diapausing larvae on host mortality and parasitoid progeny production, six different densities (1, 3, 5, 10, 20, and 30) of P. interpunctella were exposed to 2-d old three pairs (males and females)  of  H. hebetor. The larvae and the parasitoids were placed in 1000 mL rearing jars, which served as experimental arenas. H. hebetor were allowed in the jars to mate, paralyze and lay eggs on larvae. The jars containing both P. interpunctella larvae and wasps were placed in a cooled incubator maintained at 28 ± 1.5 °C, 70 ± 5% rh and 16: 8 (L: D) until the emergence of parasitoid progeny and the completion of development of P. interpunctella that escaped parasitism. Following the completion of development of H. hebetor progeny that lasted about 18 d, the experimental jars were checked for non-paralyzed host larvae that completed development and progeny of the wasp. Jars were kept at freezing temperature for 48 h to kill all insects. The numbers of H. hebetor progeny, adult moths were recorded.   There were five replicates of each treatment and three trials were carried with three simultaneous generations of P. interpunctella and H. hebetor.

The effect of provisioning H. hebetor with fresh diapausing and non-diapausing larvae of P. interpunctella daily on progeny production was investigated in 1000 mL rearing jars at 28 ± 1.5 °C, 16L: 8D and 70 ± 5% rh. Two sets of 5 jars were prepared with each jar containing a pair (one male and one female) of 2-D old H. hebetor that were provisioned with5 fresh diapausing or non-diapausing host larvae for 5 successive days by transferring the parasitoids to new jars containing fresh larvae, the old jars containing larvae were placed inside a growth chamber maintained at the conditions stated aboveuntil the emergence of F1 parasitoids. Following the completion of development of the wasps and P. interpunctella larvae that escaped parasitism, the jars were placed at freezing temperature for 48 h and the F1 wasps and adult moths were counted. Observations recorded were number of moths representing larvae that escaped parasitism and the progeny of parasitoid. The treated were replicated 6 times.

Statistical Analytical Software (SAS) ver. 9.4 updated in 2014 was used to analyze the data. Data analysis involved one way Analysis of Variance (ANOVA) procedure followed by Proc GLM and Tukey’s Kramer HSD test at 5% significance level (P ≤ 0.05) for the effects of diapausing and non-diapausing larvae on H hebetor progeny production and host larvae mortality. Prior to analysis, all data in percentages were arcsine of square root transformed (Steel and Torrie, 1980).

Table 2. Effect of host larval density on the number of F1 progeny of H. hebetor reared on diapausing and non-diapausing larvae of P. interpunctella.

* A, B, C means followed by different letters in each row are significantly different (Tukey’s Kramer HSD test, P ≤ 0.05).

Fig. 1. Effect of density of diapausing and non-diapausing larvae of P. interpunctella on progeny production by a mated female of H. hebetor. 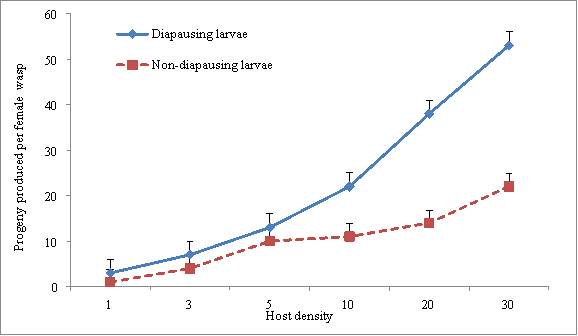 Table 3. Parasitoidprogeny/day (Mean ± S.E) of H. hebetor that were provisioned with fresh diapausing and non-diapausing host larvae daily for 5 days

On the other hand in second experiment, the number of progeny production was increased when daily fresh host larvae were supplied to parasitoid. The obtained data from the development experiment is similar to the previous study of Eliopoulos and Stathas (2008). Eliopoulos and Stathas (2008) observed the different parameters of life of H. hebetor on five different larval densities (1, 5, 10, 15 and 30) of Anagasta kuehneilla and P. interpunctella and reported that progeny production per wasp was increased when per day 15 host larvae were provided to parasitoid. In this study, the parasitoid showed more efficacies for producing progeny very early on 3rd day by providing daily fresh diapausing larvae of P. interpunctella whereas in non-diapausing larvae on 5th day. This might be due to the wasp deriving better nourishment from diapausing larvae which in turn has tended faster maturation of eggs in oocytes. It is concluded that progeny of parasitoid can be yielded markedly on diapausing larvae with one pair of parasitoid within few days and also these findings suggested that diapausing larvae of P. interpunctella could be a suitable alternative for the mass rearing of H. hebetor with higher yield.

1.       Introduction Natural gas, is also called “the prince of hydrocarbons,” is an energy game changer which top ranked among growing energy sources. It is colorless, odorless, shapeless...

India is an agrarian economy and about 60% of its population is directly or indirectly involved in agriculture. With more than a billion mouths to feed and the population increasing at an alarming rate......