Background: Species inEnterococcus genus are the cause of nosocomial infections, which are resistant to different antibiotics. Due to the existence of various Enterococcus species, molecular identification of each species and statistical analysis of their antibiotic resistance patterns is important for finding better treatments strategies.

Results: The present study considered 510 clinical samples from different hospitals in Tehran, Iran, from January to December 2015. We used PCR to identify and characterize the Enterococcus species. We identified a total of 400 Enterococci, out of which 72.30% of samples were E. faecalis strains, 10.43% were E. faecium strains, and 17.27% were other Enterococcus species. We determined antimicrobial resistances of these strains against gentamicin, vancomycin, fosfomycin/trometamol, teicoplanin and quinupristin/dalfopristin. We found a significant correlation between resistance to vancomycin and resistance to teicoplanin. This correlation remains significant when including only Enterococcus faecium or Enterococcus faecalis species. We also found a negative correlation between resistance to teicoplanin and quinupristin/dalfopristin. Quinupristin/dalfopristin is by far the least effective antibiotic on our samples and vancomycin and teicoplanin are the most effective ones.

Conclusion: We provide an analysis of the resistance of clinically isolated strains of Enterococcus species to five commonly prescribed antibiotics. We show that some of the antibiotics are drastically more effective than others, and in case of resistance to one antibiotics, which are ones may be a good or a bad second choice.

Enterococcus species are the most important part of natural flora of humans’ and animals’ gastrointestinal tract [1, 2]. Although these bacteria are often not virulent, and therefore, usually harmless, they can cause serious diseases such as urinary tract infections, endocarditis, bacteremia, wound infection, abdominal and pelvis infections, and meningitis in infants [3, 5]. Enterococci are gram-positive cocci, in binary (diplococci) or short chain forms [6]. These catalase-negative bacteria are non-spore-forming and anaerobic, which grow at 10-45°C in culture solution containing 6.5% NaCl, 40% biliary salt and pH 9.6 [6, 7]. E. faecalis and E. faecium are stable at 60°C for 30min [7, 8]. Until mid1980s, members of Enterococcus genus were classified as group D streptococci; however, Lancefield genomic analysis showed that they belong to a different genus [9]. Nowadays, almost 40 Enterococcus species are identified, of which, E. faecalis and E. faecium are found in more than 85-90% and 5-15% of clinical samples, respectively [10].

These bacteria are the main cause of infections in hospitals [1, 11], and like other nosocomial bacteria, they gain resistance to antibiotics. At present, understanding the epidemiology of resistant Enterococcus infections for the verification of non-susceptible phenotypes and identification of resistant strains has attracted much attention and led to dramatic developments in this area [1, 11]. Based on the United States Nosocomial Infections Surveillance System’s data, Enterococci are considered as one of the nosocomial pathogens [12]. These bacteria are ranked fourth in nosocomial infectious agents, third in bacterial infections, and second in pathogens causing urinary tract infections, which has prompted some to consider a worldwide emergence of antibiotic-resistance in these species [13]. Since these bacteria can live in a wide range of environments, their identification is essential for controlling and prevention of infections [14]. Enterococci infections have traditionally been treated with inhibitors of cell wall synthesis in combination with aminoglycosides. Reduced susceptibility to β-lactam antibiotics and vancomycin in combination with a high level of aminoglycoside resistance (HLAR) interferes with the penetration of the aminoglycoside into the bacterial cytoplasm, thereby making the antibiotic synergism ineffective [15, 17].

Previous epidemiological studies employed classic phenotypic methods to examine the diversity of Enterococcus infections. Although these methods led to useful information, their limitations do not allow distinguishing between species [1]. Since 1990, molecular biology techniques, especially PCR, have been used to identify various species such as those in Enterococcus genus. These quick and accurate methods are highly efficient in differentiating species [18].

Kirby-Bauer antibiotic tests were carried out to identify Enterococcus isolates resistant to gentamicin (10μg), vancomycin (30µg), teicoplanin (30µg), fosfomycin/trometamol (50μg) and quinupristin/dalfopristin (Synercid; 15µg). Figure 2 shows antibiotic resistance patterns in our bacterial samples. Isolated samples were categorized based on their origin, i.e., urine, blood, and wound samples, or samples from an sites that we labeled as “others”, due to their low frequencies. The “other” sites from which samples were taken include vagina, sputum, ascites, and bronchoalveolar lavage. Samples are categorized as being sensitive, semi-sensitive or resistant to each antibiotic using disk diffusion method, according to the guidelines of Clinical and Laboratory Standards Institute (CLSI) [20].

The bacteria have acquired different levels of resistance to different antibiotics

The Enterococcus species are most resistant to Quinupristin/dalfopristin (323 samples). This fraction is significantly more than the resistance to any other antibiotic (Fisher’s exact test, corrected for multiple testing using false discovery rate (FDR) [REF], Table 2 and Table 3). After that, and by a large distance, the least effective antibiotics are fosfomycin/trometamol and gentamicin with 117 and 90 resistant samples, respectively. They are both significantly less effective than a teicoplanin and vancomycin (Table 2). There is no significant difference in effectiveness of fosfomycin/trometamol and gentamicin. The most effective antibiotics are teicoplanin and vancomycin, with only 23 and 27 samples being resistant to them, respectively (Table 3). There is no difference between resistance to different antibiotics in E. faecium and E. faecalis (Fisher’s exact test, Table 4).

A large fraction of samples is resistant to multiple antibiotics

Age and sex have no effect on resistance to any antibiotic

Using generalized linear models with logistic regression, we found no effect of age, sex or their combination on resistance to antibiotics.

Enterococci are normally found in the gastrointestinal tract of humans and animals, in soil, plants, and food [22, 23]. These microorganisms have several distinct features due to which they grow in various conditions and become resistant to most of the antibiotics. In the past two decades, resistance to vancomycin in Enterococcus species have increased in hospitalized patients and has affected the treatment of Enterococcus infections [24]. The specific and accurate identification of Enterococcus species is important for the choice of right drug to treat infection and to avoid transfer of vancomycin-resistant plasmid from Enterococcus to main pathogen bacteria and other Enterococcus strains [25, 26].

In the present study, 72% of samples were infected with E. faecalis, 10.75% with E.  faecium, and 17.25% with other Enterococcus species. Similar frequencies of different Enterococci infections have been reported in milk and cheese samples [26]. E. faecalis and E. faecium strains make the highest percentages of Enterococcus infections. In contrast to the findings of this study, a low prevalence of E. faecalis has been observed in some previous studies. Labib Azza et al. [29] identified Enterococcus species by phenotypic and molecular methods and found significant differences between the frequency of E. faecalis and E. faecium infections. These differences can be attributed to composition of culture medium used in phenotypic methods.

We found a strong positive correlation between resistance to vancomycin and teicoplanin. This suggests that if one of these two antibiotics was not effective in treatment of an Enterococci infection, the other one will likely not be effective either and should not be prescribed. The reaction mechanism of vancomycin and teicoplanin, both from glycopeptides family, is the same. Glycopeptides inhibit growth of bacteria by interfering peptidoglycan biosynthesis. They affect the D-Ala_D-Ala peptidoglycan, which is present on the cell surface and prevents the synthesis of trans-peptidase. This enzyme used as a substrate trans-glycosylation and trans-peptidase leads to the disturbance in the septum synthesis. The emergence of simultaneous resistance was predictable in antibiotics from this family. Therefore, antibiotics from same the family should not be used for the treatment.

Table 2 and Table 3 show the effectiveness of different of antibiotics with respect to one another. Briefly, teicoplanin and vancomycin are the most effective ones, followed by Fosfomycin/trometamol and gentamicin. Quinupristin/dalfopristin, being ineffective on 80.75% (323) of the samples, seems to be a poor choice to treatment of Enterococci infections.

In sum, we showed a detailed pattern of resistance of clinically isolated Enterococci strains to five common antibiotics. There are positive and negative correlations between the resistance to these bacteria and some of them are considerably more effective than the others. Our results can guide antibiotic prescriptions against Enterococci infections.

We conducted a cross-sectional study on 510 clinically suspected Enterococcus samples (urine, wound, blood, ascites etc.) that were randomly collected from Baghiatallah and Milad hospitals (Tehran, Iran), from January to December 2015. The samples were collected from patients of all age groups and both genders, without any restrictions on the cause of hospitalization (Table S1).

We performed PCR for amplification of the aforementioned genes in Eppendorf thermal cycler (Eppendorf AG, Humburg, Germany,) using the following cycling parameters: a denaturation at 94°C for 1 min, followed by 35 cycles each of 94°C denaturation for 1 min, annealing at 55°C for 1 min and initial elongation at 72°C for 2 min and final extension at 72°C for 10 min. We analyzed PCR products by electrophoresis using 1.5% agarose gel for 50 min in 1X TBE buffer and visualized by ethidium bromide staining with the help of Gel Documentation machine (Cambridge, England, Uvitec).

Table 1The sequence of the primers used in PCR amplification of ddlE. faecalis and ddlE. faecium genes

Table 2 There are significant differences between number of resistant sample to one antibiotic versus the other. The rows are Fisher’s exact test’s odds ratio and its p-value, corrected for multiple testing using FDR [REF]. The columns are comparisons between pairs of antibiotics. GM stands for gentamicin, VAN stands for vancomycin, FOT stands for fosfomycin/trometamol, TEC stands for teicoplanin, and SYN stands for Quinupristin/dalfopristin.

Table 3 Number of samples resistant to each antibiotic. GM stands for gentamicin, VAN stands for vancomycin, FOT stands for fosfomycin/trometamol, TEC stands for teicoplanin, and SYN stands for Quinupristin/dalfopristin.

Table 6  Number of samples with co-resistance to different antibiotics by the antibiotics. GM stands for gentamicin, VAN stands for vancomycin, FOT stands for fosfomycin/trometamol, TEC stands for teicoplanin, and SYN stands for Quinupristin/dalfopristin. 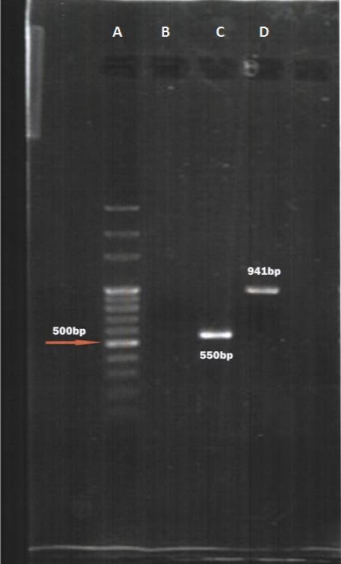 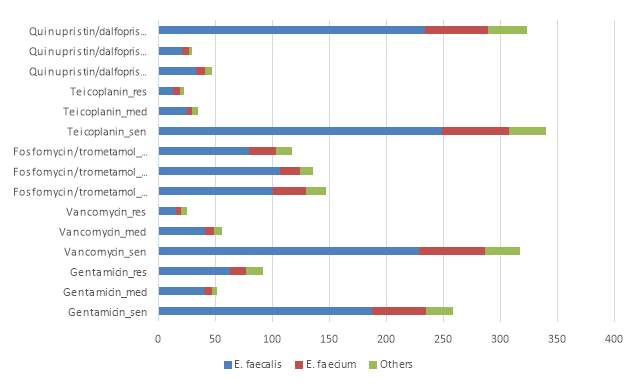