There are various types of Hepatocellular carcinoma (HCC) cell lines. Among these, HepG2 has been used most frequently in many research experiments because the cells carries a huge amount of cellular functions like general hepatocytes such as hepatocyte-specific cell surface receptors expression and plasma proteins synthesis-secretion. Furthermore, HepG2 cell line exhibits characterized morphological and functional differentiation in vitro. That is why this cell line is a perfect model to investigate intracellular trafficking (Xia et al. 2013). 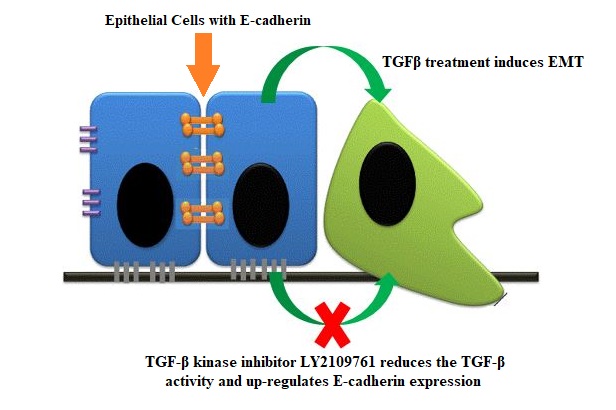 Figure 1: The activity of TGF-β and TGF-β kinase inhibitor LY2109761 upon HepG2 Cell Lines. The figure is partially adapted (Serrano-Gomez, Maziveyi and Alahari 2016).

In this report, the impact of TGF-β (30ng/ml for 48hrs) and TGF-β kinase inhibitor LY2109761 (1M for 48hrs) treated Hep G2 cell lines have been investigated through flow cytometry after a successful staining of the adhesion junction protein E-cadherin with Green Fluorescent Protein (GFP) conjugated monoclonal antibody.

Human hepatoma cells were trypsinised to hydrolyse (breakdown) extracellular and cell surface proteins involved in cell-cell and cell-flask attachment thus releasing cells into suspension. The cells were then counted by using haemocytometer for antibody staining. The cells were then fixed and stained with a GFP conjugated monoclonal antibody for a flow cytometer experiment (Cell Culture and Antibody Technology Labs Handout 1718OCTJAN).

After 3 days incubation, human HepG2 cells were treated with TGF- β (30ng/ml) and TGF-β receptor kinase inhibitor (LY2109761) (1M) for 48 hours. Then the cells were trypsinised with trypsin/EDTA solution and stained with Methylene Blue. Haemocytometer was used to count the cell viability. 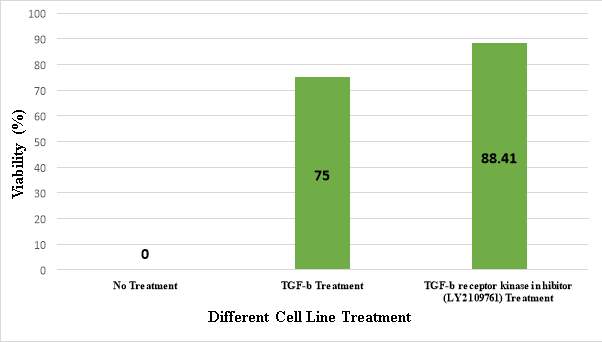 Approximately 61 cells were found live for LY2109761 treated cell suspension whereas only 8 cells were identified as dead cells. The cells which were treated with only TGF-β, about 12 cells were live and 4 cells were dead. No live cells were identified for no treatment suspension, however 5 dead cells were found under the microscope. Using proper calculation, it was demonstrated that the percentage viability for LY2109761 treated sample was 88.41% whereas the TGF-β treated sample showed 75% viability rate. As there was no viable cells for no treatment sample, the viabilty percentage was zero (Figure 2).

About 1220000, 240000 and 0 cells were identified as viable per cm3 for LY2109761, TGF-β, no treatment sample respectively (Figure 3). Approximately 100000 viable cells from each treatment were directly stained with with a GFP conjugated monoclonal antibody for a flow cytometer (FACS) experiment. 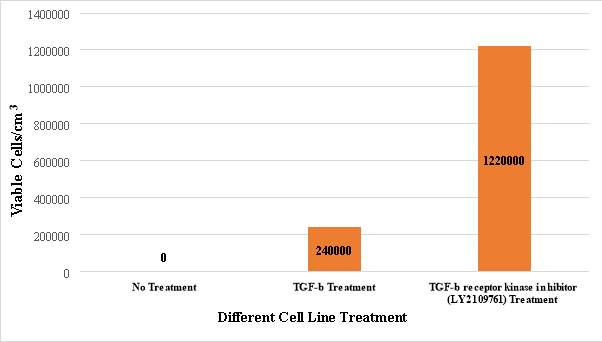 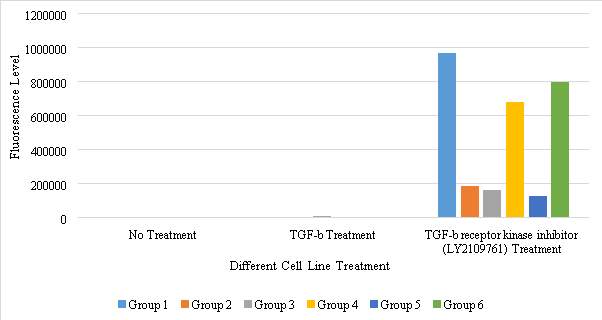 Figure 4: Different fluorescence level for each of the individual group treatment by FACS 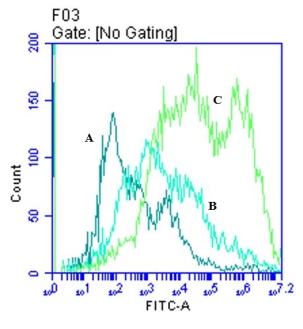 TGF-β is a major growth inhibitor and apoptosis inducer in hepatocytes (Siegel and Massague 2003). However, although it plays role as a tumour suppressor (Bierie and Moses 2006; Levy and Hill 2006), it can also come up with tumour progression and metastasis through EMT (Bierie and Moses 2006), which results in enhanced cell migration and invasion (Gotzmann et al. 2002; Pagan et al. 1999).

In this experiment, TGF-β is identified as a key factor in the microenvironment that takes part in the induction of EMT process. E-cadherin which is dependent on calcium (Ca2+)ions to perform, ensures cells adhesions within tissues or in monolayer. By chelating Ca2+, E-cadherins become inactivated which results in the dissociation of cells or tissues (van Roy and Berx 2008). Trypsin/EDTA was employed to breakdown the attachment between cell-cell and cell-flask attachment (Fong, Duceppe and Hoemann 2017). Then methylene bluewas used to stain the cell for counting on haemocytometer. Methylene Blue, a metachromatic stain was used which makes the DNA in the nucleus to stand out for observation to see the cell clearly under the light microscope. Methylene Blue can be transformed to a colourless substance, while the dead cells retain the blue colour of the stain by metabolically active viable cells with dehydrogenase activity (Kucsera, Yarita and Takeo 2000). In haemocytometer, relatively more cells were found live for LY2109761 treated cell suspension than any other treatment. It was due to poor maintenance of the cells. The cells were shaken for more than enough times and was process for a long time which results in unexpected dead cells (Lorsch, Collins and Lippincott-Schwartz 2014). The sufficient live cells were then fixed using paraformaldehyde to increase the cells permeability which allowed stained antibodies to access intracellular structures (Yuan et al. 2017). In case of antibody selection, monoclonal antibodies were used because polyclonal antibodies tend to bind multiple aspects of the same antigen, causing problem in data analysis when used in flow cytometry. Conversely, homogeneous monoclonal antibodies acts differently and effectively label cells (Pelletier et al. 2017). For the stain, Green Fluorescent Protein (GFP), a 488nm fluorescent cytochrome was used which is identifiable in the green light wavelength (Adan et al. 2017; Svendsen et al. 2017). Binding with monoclonal antibodies, it directly stains the adhesion junction protein E-cadherin (Sanchez et al. 2014), therefore, the cells.

The GFP-conjugated cells produce characterized histograms for the flow cytometry. A flow cytometer can identify the presence of a fluorophore and also quantify the relative measurement of a fluorophore within a cell (Evans et al. 2017). Dead cells show higher side scatter and lower forward scatter than the viable cells as well as in histograms, live cells exhibit higher peak than dead cells (Adan et al. 2017). From the results, it can be seen that LY2109761 treated cells have the highest peak in the histograms and thus result in maximum fluorescence level. It was due to more stained E-cadherin. As it is well known that TGFβ induce morphological changes to EMT by protein phosphorylation; individual phosphatases plays an important role in E-cadherin-mediated cell-cell adhesion. In this study, it is assumed that TGFβ inhibits the activity of phosphatases which results in the induction of EMT process. TGFβ treatment enhanced phosphorylation, which resulted in dissociation of the E-cadherin from the actin cytoskeleton and reduced cell-cell adhesion (Adan et al. 2017; Bhowmick et al. 2001). By contrast, LY2109761 inhibited the process of phosphorylation that is why there was no EMT process to take place so produce high peak in the histograms. Moreover, relatively higher side scatter and lower forward scatter in dot plots also indicated more viability for LY2109761 treated cells.

There were also some dots and fluorescence for the no treatment sample. It was happened due to failure of maintaining good aseptic technique that is why there might be some environmental contamination in the cell suspension (Lorsch, Collins and Lippincott-Schwartz 2014).

The limitation can be said that there was no positive control. A positive control could be more supportive to interpret the data more accurately such as histograms and fluorescence level in flow cytometry (Althubiti and Macip 2017). Additionally, a good aseptic technique could result more live cells to be tested. Additional experiments with different monoclonal antibodies could generate more explainable and comparable data (Vongchan and Linhardt 2017). Total six different experiments were done, more cell lines could produce more comparable data for analysis.

Based on previous studies, it is inferred that TGF-β could induce EMT which has effect on cell-cell adhesion molecule E-cadherin. As TGF-β plays various types of roles in tissue culture technology, how to make good use of TGF-β as a double edge sword, will be the key research area in future.

PCR and LAMP Assays for Detection of Phytophthora Infestans Spores

The objective of this work was to develop diagnostics suitable for in-field monitoring of P. infestans and A. solani inoculumand to demonstrate their ability to detect air-borne sporangia/spores....

Mesoporous Silica as a Carrier for Amorphous Solid Dispersion

This review focuses on the use of mesoporous silica in ASD as potential means to increase the dissolution rate and to provide or increase the stability of the ASD....

The first objective of present study was to evaluate the effects of PEG-induced drought stress on the leaves-derived callus of S. rebaudiana. The second aim of study was to understand if PBZ (a GA biosynthesis inhibitor) and GA treatments could reduce negative effects of PEG on Stevia calluses....