Functional deficits are observable in neurological populations, and hand function is critical to restore in order to regain independence. The motor recovery of the hand post-stroke is challenging and has prompted neurological rehabilitative research to investigate alternate modalities. There has been increased investigation into neuroplastic changes on interventions to improve motor function (Dimyan & Cohen, 2011).

TMS can explore central and peripheral nervous system activity and the present study observes the stimulation of the corticospinal tract pathway, using single and paired-pulse TMS. Single-pulse TMS (sTMS) is used to map cortico-motor outputs, central motor conduction time and to study brain behaviour relationships (Kobayashi & Pascual-Leone, 2003; Rossi, Hallett, Rossini, Pascual-Leone, & Group, 2009). Paired-pulse TMS (ppTMS) is used to evaluate Short-Latency Intracortical Inhibition (SICI), using a sub-threshold conditioning stimulus prior to a test stimulus. It has been shown in a healthy population that inhibition occurs at an inter-stimulus interval (ISI) between 1-6ms, and facilitation between 10-15ms (Kujirai et al., 1993). The resulting MEPs can be recorded on electromyography (EMG) and are often associated with a visual muscle twitch, depending on the strength of stimulus (Paolo Maria Rossini et al., 2015).

Participants were recruited from around the university via research posters, online advertisement and word of mouth. Throughout the 8 months of recruitment, 16 participants were screened for eligibility and were within the age requirements (18-45 years) with no neurological conditions or upper limb injuries. Selected participants underwent final screening for eligibility based on TMS safety guidelines (Rossi et al., 2009) and 6 participants were excluded due to neurological contraindications to TMS. One participant voluntarily dropped out. Handedness was evaluated using the Short-Form Edinburgh Handedness Questionnaire (Veale, 2014). Written informed consent was obtained by all participants and the local ethics committee approved the study in accordance with the Declaration of Helsinki.

Surface EMG was recorded from the Extensor Digitorum (ED) using 18mm diameter self-adhesive disposable electrodes (Ag-AgCl). Standard skin preparation was used, and electrodes placed in a belly – tendon arrangement approximately 2 cm apart over the ED. The earth electrode was placed over the olecranon process of the same arm. Participants were seated with their hand resting on a firm surface in a chosen position of comfort. Electrical noise was set at <0.01Hz.

TMS was delivered by an 8cm ‘figure of 8’ coil and a Magstim 2002 TMS machine connected to a BiStim unit (Magstim Company, Dyfed, UK). The cortical current was directed in a posterior-anterior direction and the coil held tangential to the scalp. Single-pulse TMS was used to ‘hotspot’ the representation of the Extensor Digitorum (ED) of the non-dominant hand. TMS intensity was initially set to 40% maximum stimulator output (%MSO) and increased if there were no measurable MEPs. Once the optimal site was located for eliciting MEPs in the ED, the tri-planar position of the TMS coil was taped and marked on the scalp.

Single-pulse TMS (sTMS) was used to obtain MEPPP amplitude at 80, 100, 120, 140, and 160% of RMT. Data was collected for five sweeps at each intensity in a random order and varied across all trials. The time interval between sweeps ranged between 5-7 seconds. Sweeps were excluded when the coil operator reported themselves in the incorrect position, or physiological noise was observable.

The procedures for sTMS and ppTMS were recorded pre and post-training for each participant using the same initial RMT, scalp location, and TMS coil orientation.

Participants were seated at the Tyromotion Amadeo machine with the non-dominant hand secured in a comfortable position, the elbow flexed at 90 degrees and the wrist and shoulders neutral. Finger magnets were attached to the distal four fingers and connected to the magnets of the robotic finger levers.  Active range of motion (AROM) was measured and recorded for finger flexion and extension and calibrated for each participant. Two robotic training games (“Shooting Cans” and “Rubbish Pickup”) were administered using 75% of participants predetermined AROM and the Amadeo mid-range resistance setting. Participants completed 2-minutes of levels 6 to 10 consecutively for each game. Repetitions were recorded using a digital counter where one cycle of flexion and extension equated to one repetition. Training was terminated at the completion of 300 repetitions (Carroll et al., 2008).

IBM SPSS software was used to analyse all raw data. Statistical significance was evaluated, and reported as an F-statistic as: [F(Dftime, Dferror) = F-value, p = p-value] and effect sizes from ANOVA were determined as partial ε-squared (ηp2). A Shapiro-Wilk’s test was used to test for normality and Mauchly’s test of sphericity was used to determine non-spherical data. When sphericity was violated a Greenhouse-Geisser correction was applied.

A two-way rmANOVA with factors TIME (pre and post) and INTENSITY (80, 100, 120, 140 and 160% RMT) used to assess changes in cortical excitability. Paired-sample t-tests were used to determine if post-training values were significantly different from pre-training at each given intensity.

SICI was calculated using the formula, % threshold change = (C – NC/NC) × 100, to assess inhibition at 1ms and 3ms ISI. The abbreviation C and NC correspond to conditioned and non-conditioned MT (%MSO). A similar two-way rmANOVA was performed for analyses of inhibition with factors TIME (pre and post) and ISI (1ms and 3ms) to determine change in post-training cortical excitability. 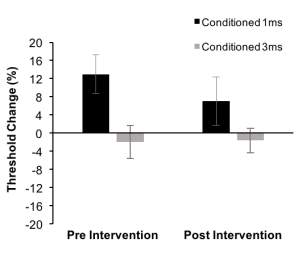 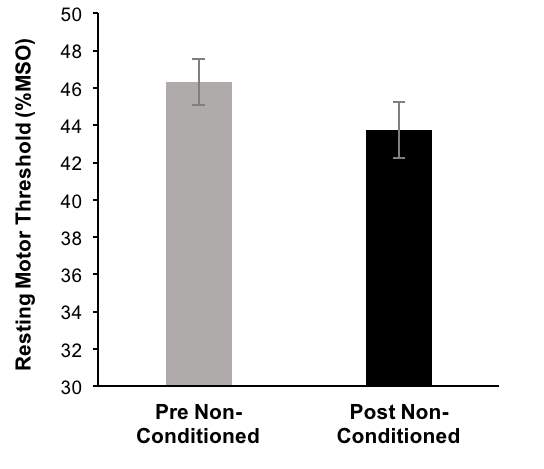 To date, this is the first study that evaluates the effects of game-based robotic hand training on cortico-motor excitability and the inhibitory pathways. Exploring this potential could expand the understanding of neuroplasticity in rehabilitation of paretic limb populations such as stroke affected patients (Johansson, 2011). Whilst novel, this study provides some promising results for high repetition robotic hand training and its effects on acute neuroplasticity of the contralateral hemisphere (Carroll et al., 2008; Koeneke, Lutz, Herwig, Ziemann, & Jäncke, 2006).

The main finding in this study was that mean MEPPP amplitudes post-training increased significantly at intensities of 100 (p = 0.02), 120 (p = 0.03) and 160 (p = 0.02) % RMT. This suggests that 300 repetitions of robotic hand training can induce positive changes in acute cortico-motor excitability of healthy adults. Intensities of 80 and 140% RMT did not increase significantly; however, there was still an observable increase in the mean data of 140% RMT post-training (0.23 ± 0.18) which fits the trend of the research results (Fig. 1).

No differences were observed from baseline SICI to post-training at ISI 1ms (p = 0.23) or 3ms (p = 0.95). There was a notable decrease in MT for SICI 1ms post-training (5.93 ± 4.56) suggesting some suppression of the neural inhibitory mechanisms; however, this data is inconclusive and further research would need to look to validate these effects. The main difference discovered in the SICI data was shown at pre-training between ISI 1ms and 3ms (p = 0.03). Interestingly, the population mean showed inhibition at 1ms ISI (12.98 ± 4.28) and facilitation at 3ms ISI (-1.97 ± 3.64) (Fig. 2). Contrary to these findings, current literature states that inhibition should be observed between ISI of 1-5ms and facilitation between ISI 8-15ms (Kujirai et al., 1993; Ridding, Rothwell, & Inzelberg, 1995; Shimizu et al., 1999; Ziemann, Rothwell, & Ridding, 1996). This present data could be falsely represented due to the large variability between participants and would need to be further quantified to draw conclusions.

Analysis of the SICI NC stimulus revealed a difference in MT between pre and post-training (p = 0.03), which suggests that cortico-motor excitability is observed after a period of game-based robotic hand training. The SICI NC stimulus represents that of baseline and post RMT trials in previous studies and the results observed here are consistent with the current knowledge surrounding neuroplasticity after hand training (Sunderland & Tuke, 2005).

In conclusion, the present results indicate that robotic hand training has increased effects on cortico-motor excitability in a healthy population.

One limitation highlighted in the present study is the small sample size in comparison to other TMS studies investigating cortico-motor excitability for motor recovery (Richards, Stewart, Woodbury, Senesac, & Cauraugh, 2008). A control group was also not implemented which challenges the efficacy of robotic hand training against conventional hand therapy. The game-based robotic hand training device can also be considered not challenging enough for a healthy population.

Further studies should investigate a cross-over controlled trial of active and passive robotic hand training, including evaluation of the prolonged effects of cortico-motor excitability. Research should also look to investigate neuroplastic effects of robotic hand training on neurological populations with functional deficits, such as stroke. A greater understanding of dose-response relationships between robotic training and cortico-motor excitability could help aid the development of future robot based rehabilitative protocol.

The authors declare there were no financial or professional conflicts of interests.