A structure which is safe in deflection and normal stress, fails in buckling. Plates are widely used in the structure which is subjected to continues loading throughout their life span. To withstand such a load, stiffeners are introduced which increases the strength, the overall stiffness and provide resistance to buckling. Plates are available in various forms such as rectangular, skew, and curve. These are different types of stiffener system, namely transverse, longitudinal and both transverse and longitudinal system. In this work, rectangular plates with longitudinal stiffener system was used.

The stiffened plate is one of the most basic component among all which is identified in bridges, buildings, airplanes, offshore structures. The main difference between the offshore structures and other structure is that the former one experiences In-plane loads in addition to the other loads. Due to their complexity in the structure, the concept of elastic instability has to studied well to proceed further. To understand the behaviour of the stiffened plate in such loading, buckling analysis is done. Basically, three forms of procedure namely theoretical and/or numerical computer-aided and/or experimental can be adopted. In this work, numerical computer aided approach along with theoretical validation was adopted. The most common computer aided programming of Finite Element Analysis- ANSYS was used.

The buckling performance can be influenced by variation in cross section, which suits the case of stiffened plate with filleted junction. Larger the radius of the fillet, the weight of the whole plate structure increases. Hence the geometry of the plate influences the buckling. In such a case, the fillet radii are an important parameter.

Numerical results for both the plate are obtained through Finite Element Program software ANSYS and compared for the conclusion.

The plates in the ship deck are subjected to continuous loading and are prone to buckling. In such a case, the concept of increasing the thickness or providing the stiffeners to the plate are implemented which will increase the stiffness. On the other hand, stiffened plate on a particular zone can also experience buckling due to heavy loading by which the introduction of additional structure such a filleted junction to the stiffened plate can increase the stiffness. This work is important in analysing, comparing both the plates and the previous works identified rarely used ANSYS software for simulation by which this work become unique. Additionally, it is important to understand the behaviour of the stiffened plate on different environmental condition which lies in proportion with two important parameters such as aspect ratio and slenderness ratio. Hence, this work proves to be important for all the structural engineers.

Razzaque and M. D. Mathers (A. Razzaque & M. D. Mathers, 1983), conducted various experiments on buckling analysis of stiffened plates and shells. Ali Rezo Poladkhan et al (Ali Rezo Pouladkhan, et al., 2011), presented a paper in which they used equilibrium equation to analyse the buckling of stiffened plates. Archie Wilmer III (Archie Wilmer III, 2003), presented a paper on buckling analysis of plates with bulb flat flange stiffener and concluded that the former is four percent less than the T-flange stiffener. Ashutosh kumar, Rachayya R. Arakerimath (Ashutosh Kumar & Rachayya R. Arakerimath, 2015), analytically derived the buckling mode shapes, the nature of buckling using equilibrium method and compared it with finite element approach which was found to be matching. Dr. Alice Mathai et al (Dr. Alice Mathai, et al., 2014), presented a non-linear buckling analysis of stiffened plate and compared it with finite element software NISA which was found to be convincing. Ghania Ikhenazen, Messaoud Saidani (Ghania Ikhazen & Messaoud Saidani, 2010), used total energy concept to analyse the chart of buckling factor versus aspect ratio and width ratio of an isotropic plate subjected to in-plane loading. J.Rhodes (J. Rhodes, 2002), presented paper on buckling analysis of stiffened plates subjected to local buckling. He also concluded that the confining the plate to maximum local buckling wuld prevent the overall buckling. Mudhujit Mukhopadhayay, Abjijit Mukherjee (Mudhujit Mukhopadhay & Abhijit mukherjee, 1990), carried out numerical analysis on stiffened iso-parametric and skew plate. He concluded that the stiffener can accommodate irregular boundaries and the buckling load reduces with eccentricity of the stiffeners. P. Seide (P. Seide, 1953), derived the effective moment of inertia from the effect of eccentricity of the stiffeners. Patrick E. Fenner, Andrew Watson (Patrick E. Fenner & Andrew Watson, 2012), presented a work on buckling analysis of stiffened plate with filleted junction. He came up with a conclusion that there is limit of adding mass at junctions to increase the local buckling stability. The fillet increases the stiffness however it also increases the critical buckling stress. He also suggested that a higher fillet size increases the value of K than the upper bound value.

A. BUCKLING MODES OF STIFFENED PLATES

The failure of the stiffened plate can be in different forms namely local buckling, plate induced failure or stiffener induced failure overall buckling and tripping. Theoretically, the local and overall failure can be identified in all wavelengths but practically it is difficult due to the material strength at that point.

In the local mode of failure, the web line junction does not project to the out-of-plane direction but in some cases there exists where the line junction exits the out-of-plane area. This displacement will be small such like (1/10) th of the overall displacement which strengthens the fact that it does not project to the out-of-plane area. In this work, the stiffened plate which is subjected to uniaxial edge compression is adopted which allows to perform theoretical calculation and analysis around the overall or tripping failure.

Tripping failure of stiffened plate is lateral torsional buckling which takes place about the stiffener to plate junction (Imtiaz A. Sheikh, et al., 2001). It is actually sudden drop in load carrying capacity. This type of failure can be serious at times due to the drop in load carrying capacity. It has to be noted that the tripping stiffener experience tension but it may also be subjected to compression due to bending.

B. WELDING CHARACTERISTICS AND TECHNIQUES IN SHIP PLATES

Welding of ships plates and the stiffener are carried out in two different ways. Continuous welding is used as a procedure to weld the plate and the stiffener which requires huge quantity of weld. It may also add to the weight of the ship and increases the construction cost. Despite increasing the welding quantity, this procedure becomes faster and reduces the labour cost.

Alternatively, the longitudinal stiffeners are attached to plating using intermittent fillet welds. This process reduces the construction cost and also the amount of residual stresses when compared to the former welding process.

Welding the stiffener plates affects both initial distortion and the residual stresses. These two parameter can vary and number of statistical work has been done in understanding this concept by experts.

Faulkner (1975), Carlsen and Czujko (1978) and Smith et al. (1991), conducted surveys on different structures to assess the above two parameters. Faulkner (1975) assessed 300 built in stiffened plates specimens and measured the initial plate distortion. He proposed a relationship for

table shows the dimensions of the square stiffened plate, load applied to solve the same. 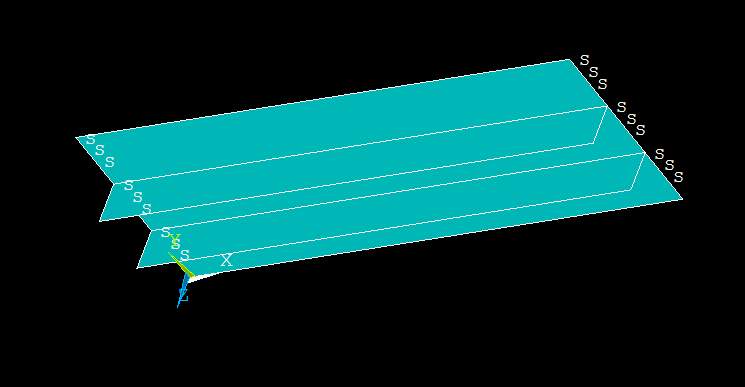 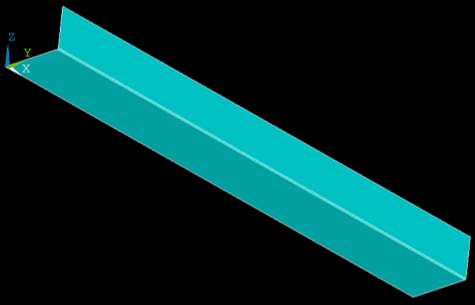 Figure View of part of stiffened plate with filleted junction 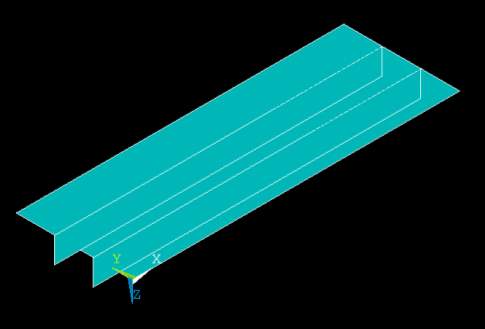 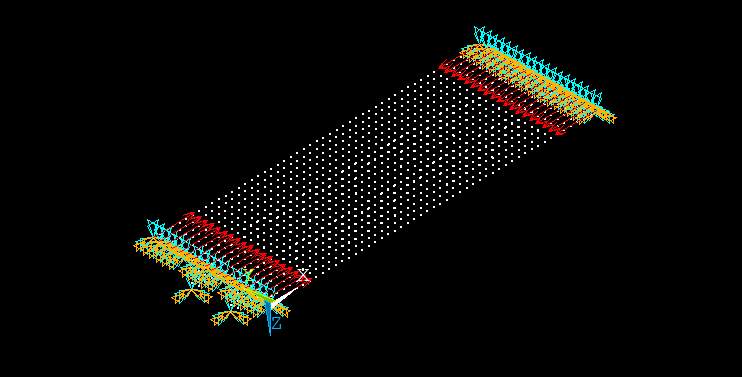 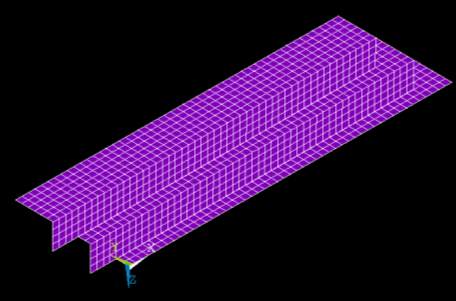 Figure Mapped meshing of the stiffened plate with filleted junction

A. EFFECT OF SLENDERNESS PARAMETER ON FAILURE MODE

Table () Effect of β1 with β3 = 0.3 on plates with uniaxial compression

Table () Effect of β2 with β3 = 0.3 on plates with uniaxial compression

Table () Effect of β3 on plates with uniaxial compression 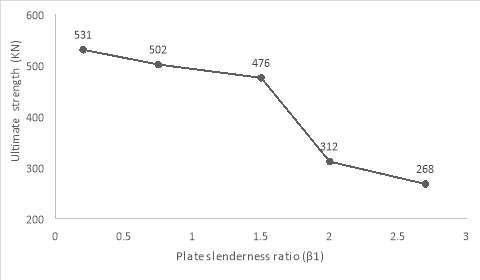 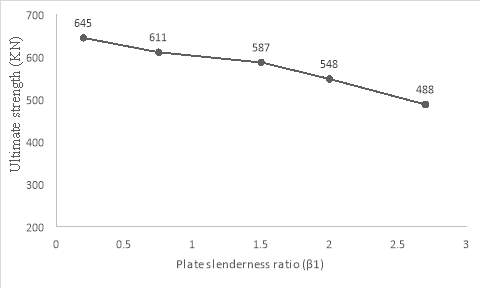 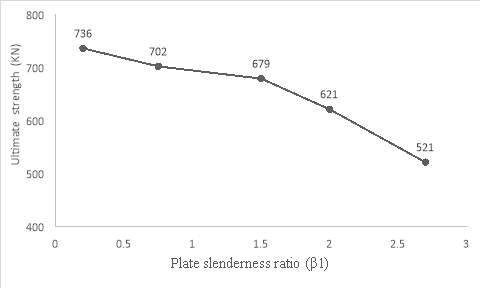 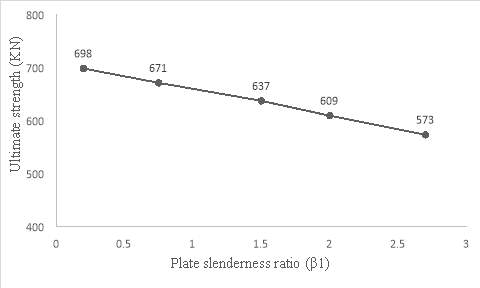 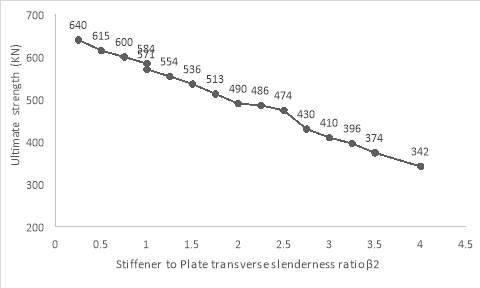 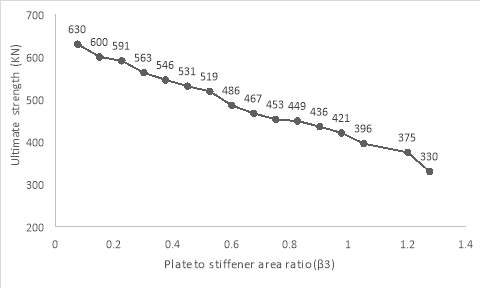 B. EFFECT OF ASPECT RATIO PARAMETER

Where, tp – thickness of the plate,

tw- thickness of the web,

The initial out of plane deflection of the plate is obtained by the following table.

The initial out of plane deflection of the web is calculated as Wos = 0.00075a.

The below table shows the results obtained through software simulation and the theoretical calculation. From the results, it is predicted that the more tensile residual stresses present in the web it will be proportional to the average stress stain response. Although the above reason does not have effect on the buckling strength, the residual stress plays a significant role in the load carrying capacity of the initially distorted plate. 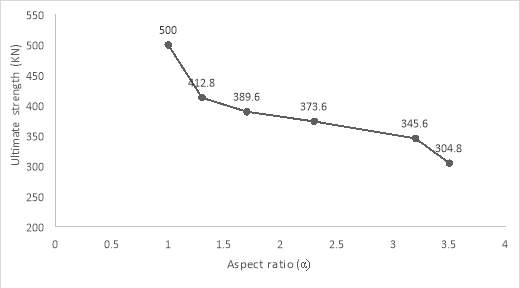 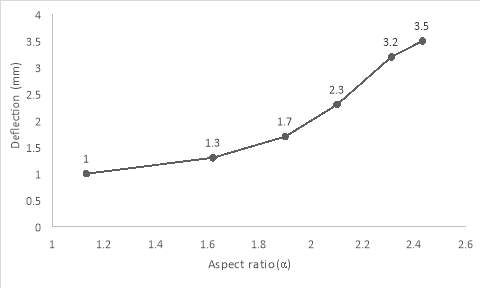 Influence of Aspect ratio on deflection

The stiffened plate with filleted junction was simulated in ansys by designing the plate and stiffener with fillet radii of 2, 3, 4, 5mm respectively. The loads were applied and solved for result. The solutions obtained were buckling pattern, stress and load factor. The buckling pattern of different fillet radii are shown in the figures. It is evident from these different pattern that the buckling is due to the stiffener which is stiffener induced buckling. The deflection values changes due to the varying residual stress. From the load factor, the ultimate strength of the plate was found. Two different plots namely deflection versus fillet radii and ultimate strength versus fillet radii was formed to have a better understanding to derive a conclusion between the square and fillet junction stiffened plate. 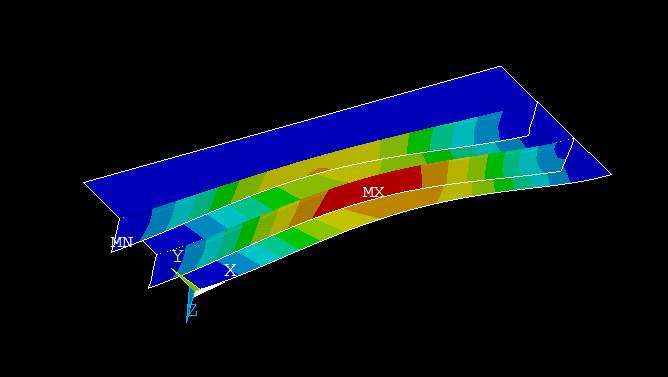 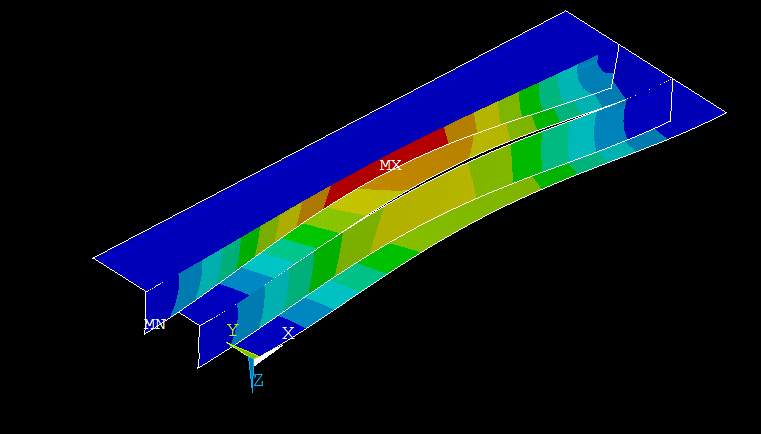 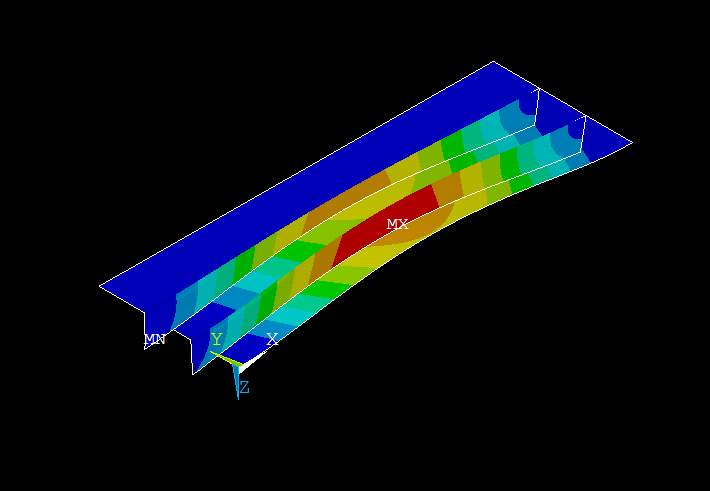 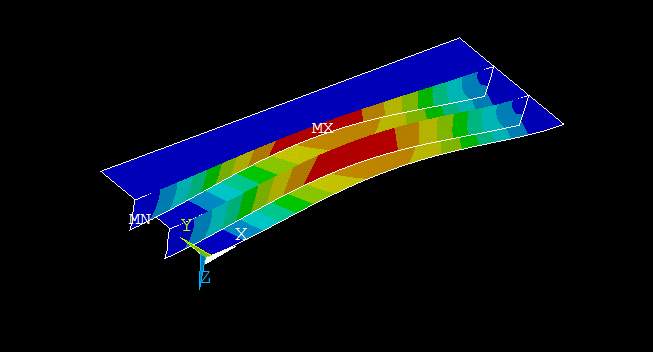 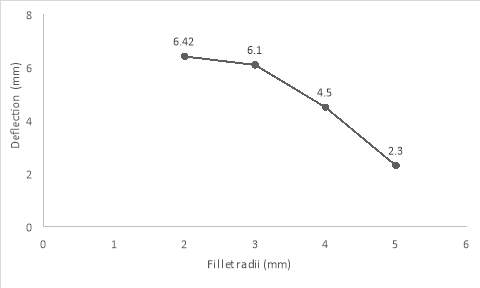 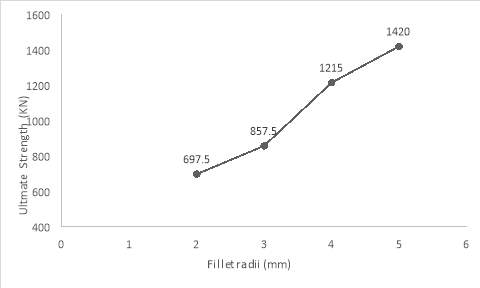 Buckling of square and fillet junctions: The analysis of buckling of two plates with different properties through ansys brought few important points which would be novel in the ship structural design. The buckling of square stiffened plate resulted in small deflection when compared to the fillet junction plates. The line junction of the plate has been the efficient modal in the ship structural design which is evident from this simulation where the deflection of the plate is small than the fillet junction. When the fillet junction stiffened plate results are compared, it is understood that the ultimate strength of the fillet junction plate increases with increase in fillet radii. In the case of deflection, lower the fillet radii will result in large deflection and vice versa by which it can be concluded that the use of large fillet radii is efficient but there is limit to increase the radii because it could add mass to the structure resulting in higher manufacturing cost. In this part of the work, the plate with only longitudinal stiffener and the loading in uniaxial direction was examined and it is recommended to consider both transverse and longitudinal stiffened plate loaded in biaxial direction which could to be very novel for ships exposed to heavy weather.

Mechanics is the area that focuses on motion, and how different forces can produce motion. When an object has forced applied to it, the original position of the object will change.

Development of Prediction Models for Skid Resistance of Asphalt Pavements and Seal Coat Abstract Maintaining adequate level of skid resistance is essential for road safety. As part of their regular ma...

Design, Analysis and Optimisation of a Marine Fitting

ABSTRACT Improvement in technology means enhanced and efficient ways of solving daily problem. FEA is being used in Optimisation thus increasing effectiveness and a reduced cost. In this project,...

To Investigate the Factors that Influence the Mechanical Properties of Extruded Nylon Medical Device Tubing Abstract The aim of this project was to investigate the factors that can change the mec...