Growth rate dispersion in lactose crystallization was not well understood. Many researches were performed such as overall growth rate dispersion contact nucleation by Shi (1989), lactose crystal size distribution from a continuous cooling crystallizer by Liang et al. (T.D. Dincer, 2009), a microscopic cell to research about the nucleation and growth of lactose by Y. Shi, Hartel, and Liang (1989), etc., to enhance understanding of this topic.

In this project growth rate dispersion studies were performed in a c-chip. It is a disposable hemocytometer used to count blood cells. It has defined area which enables us to measure the size of the crystals over time and helps to understand growth rate of individual crystals. There are so many problems incurred during the experimental process such as crystallization in beaker, poor quality camera, air gaps in c-chips due to evaporation and poor crystal growth and formation.

It was found that the c-chip was not completely sealed during the evaporation tests. A clear tape was used to seal the sides of the c-chip along with the opening and the closing of the chamber as it was considered as the better option from the evaporation tests. It was found difficult to compare the results obtained in the experiment with the stirred vessel crystallizers as, crystal growth couldn’t be replicated even after performing the experiments in the similar conditions. It is a time consuming process and not worth spending time and money.

This research was performed by analysing the works of the previous reports and articles from Massey University and peer reviewed journals provided by my supervisor Prof. Tony Paterson. The area of the growth rate dispersion was not very well understood, so, the experiment is performed in a c-chip which is a small volume crystallizer of 10µL and has well defined area which enables to measure the size of the crystal. There are many problems incurred during the experiment. So, as suggested by my supervisor, only worked on the growth rate dispersion and ignored about nucleation of lactose. The research can be beneficial to many industries such as confectionary, food related and pharmaceuticals, etc. In the analysis and the characterization of crystal growth progress there has been an increasing recognition of the feature GRD. Hence understanding growth rate dispersion can be quite significant.

The objective of this experiment are:

This paper is organised as follows. The first section talks about the literature review to briefly explain what growth rate dispersion is, c-chip information and previous works. This is followed by the various problems in the experiment and their possible solutions. Then the results of the experiment were discussed and in the final section conclusion and recommendations are presented to take this work further.

Each individual crystal has a different growth rate even though they are growing under identical conditions. This phenomenon is called growth rate dispersion. Some of the crystals towards left of the dotted line grow faster and ones on the right grow slow within the broad range of particle distribution as shown in the figure 1. GRD in lactose crystallization was first reported by Visser (T.D. Dincer, 2009). GRD was proposed by Zumstein and Rousseau (1987) which is a result of individual crystals dislocation network. 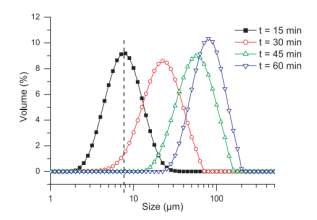 C-chip is a plastic disposable hemocytometer with a volume of 10µL. It consist of two chambers A and B which are enclosed and has two ports for sample injection.  The area of each large square within a grid in c-chip is 1 x 1 mm and the chamber depth is 0.1 mm (NanoEntek, 2018). 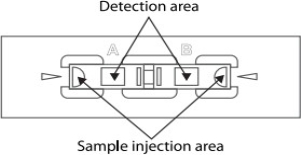 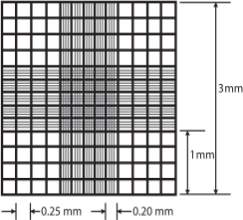 Similar experiment to c-chip were performed by T.D. Dincer (2009) using the apparatus developed by Lee and Parkinson (1999) which was used to measure growth rates of four faces of ALM. He performed the experiment at similar temperature and super saturations (T.D. Dincer, 2009).

Table 1: Literature data of in situ and stirred vessel crystallizers

Exact amounts of ALM and water needed were calculated before performing the experiment depending upon the required super saturation and temperature at which the experiment is performed. Lactose and water are mixed using the magnetic stirrer and is heated to required temperature using the heating mantle. Thermometer was clamped in such a way that it can hold in place in the lactose solution. A tin foil was used to cover the beaker to prevent or reduce the evaporation losses. The solution before and after heating is weighed, so, water can be added to account for the evaporation losses. By the end of the experiment the lactose is completely dissolved and the solution is clear.

This hot solution is injected into the c-chip in one of the chambers. It is then sealed and placed under the microscope to observe the crystal growth progress. Photos were time stamped to enable easy tracking of the crystal growth process. Area of the c-chip were marked to follow the individual crystals growth rate. Image J analysis was used to measure the area of the individual crystals over time. This experiment was initially performed in a temperature controlled room but was moved to Micro lab and experiments were performed at room temperature. The apparatus used in the experiment are shown in the Figure 4 and Figure 5. 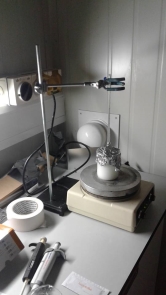 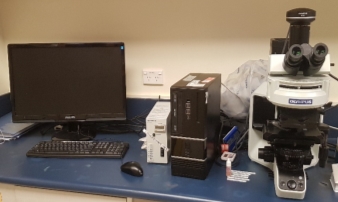 At the beginning of the experiment it was decided to leave the lactose solution over night before performing the experiment. But it was found that the solution is completely crystallized and is in solid state. Initially, the experiment was conducted in a temperature-controlled room (250C), the quality of the camera provided was too poor and it could only show grids but not the crystals. So, the microscope in the Micro lab was used. Due to the movement of the c-chips to different lab resulted in inability to track the crystal growth progress. Also, air gaps were formed in the c-chip due to the evaporation as shown in the Figure 6. After the entire experimental set up moved to the Micro lab, poor crystal formation and growth were observed in the c-chip. 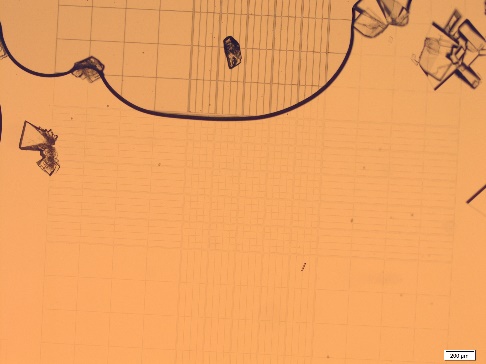 To prevent crystallization in beaker it was decided to inject the hot solution directly into the c-chip. Initially, supersaturated solution was made in the temperature-controlled room and the solution was injected into c-chip and was taken to the micro lab to use the microscope. Later, in order to follow the crystal growth progress properly, the entire set up was shifted to the Micro lab and the experiments were performed. To prevent the air bubbles formation in the c-chip opening and closing of the c-chips were sealed which didn’t solve the problem so various evaporation tests were performed using different sealing materials and tapes. The clear tape showed better results and the c-chip had well defined crystals as shown in the Figure 7. This tests gave an idea of how long the crystal growth occurs (until the crystals can be measured) to manage time of the experimental process. It was observed that growth of the crystals occurred within 2-3 hours. 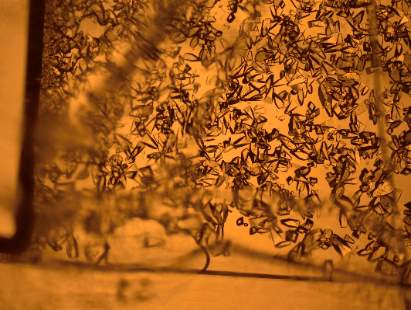 Another solution was to bring the c-chip and the lactose solution to the same temperature before injection to prevent evaporation losses. It was found that the c-chip was not completely sealed and had 2 layers in it. So, all the edges of the c-chip were sealed along with the opening and the closing of the chamber using a clear tape as shown in the, Figure 8.

The graph below is showing the growth rate of individual crystals in a c-chip. The experiment was performed at a temperature of 20.30C and at a super saturation of 20 for about 10 ½ hours. 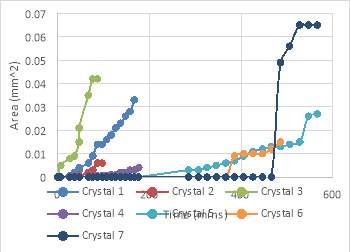 Figure 9 clearly shows that some of the crystal grow faster (crystal 1, 2, 3, 4) by utilising solute and some are slow growers (crystal 5, 6, 7) similar to bell block curve shown in Figure 1. Poor crystal formation and limited growth could be due to contamination at some point during the experimental procedure. Also, the experiment is performed in a Micro lab, where all the standard microbiological procedure were performed. The room could be filled with unknown bacteria or impurities which could be limiting or reducing the crystal growth. Due poor results and inability to replicate the experimental results, it was difficult to compare the c-chip reslts with the stirred vessel crystallizer.

This paper describes about the growth rate dispersion of lactose crystallization. It was found hard to compare the results obtained in the experiment with the stirred vessel crystallizer as the data obtained is poor and not reliable as it couldn’t be replicated. This experiment with c-chip has many problem and it doesn’t work. Also, it is time consuming process and requires proper conditions (clean) to perform the experiment and hence, not worth investing money and time.

Equation used in this experiment are:

The absolute super saturation of ALM:

The lactose solubility concentration is:

Lactose concentration as a function of temperature:

Cyanide (CN–) is a carbon-nitrogen toxic radical with a strong affinity for metals, which makes it favourable as a lixiviant for metal leaching and as an agent for metal finishing. Therefore, i...

Abstract Depending on the source (softwood, hardwood or annual crop) or isolation method (kraft, organosolv, sulfite, soda or enzymatic-hydrolysis), there are significant variations in lignin struct...

Chapter 2   Literature Review 2.1 Thermoplastics Thermoplastic polymers consist of long, linear polymeric chains or branched chains that are held together by secondary bonds, like hydrogen bonds an...