Concrete is the most used material on earth after water and least energy consuming material after wood. But the production of cement is responsible for world’s 7% greenhouse gas emissions due to the large application of concrete worldwide. 1 ton of cement produces around 0.82 tons of CO2 worldwide. There is a scope to reduce the emissions produced by cement by using alternative cementitious materials such as fly ash. A high volume fly ash concrete (HVFAC) can address the two environmental problems caused by cement production and environmental waste caused by disposing of fly ash in the landfills.

This study presents the investigation on combination of various factors on improving the early strength of very high volume fly ash concrete with 80% class F fly ash. Factors considered were using two different grades of ultra-fine fly ash, addition of lime and SF in quantities 0%, 5% and 10%. Compressive strengths and water absorption tests were carried out and the results confirm the developing high strength VHVFA mortar with 80% replacement of cement with class F type ultra-fine fly ash.

The cement industry has experienced explosive growth due to world’s urbanisation and in 2014 alone, around 4.2 billion tons of cement was produced (Xing). But, the process of cement production is causing environmental problems as 1 ton of cement produces around 0.82 tons of CO2 (Wilson and Tagaza 2006).

Fly ash is a by-product of coal combustion from thermal power plants. Australia is a country where around 84% of the total electricity generation is produced from thermal power plants. Based on the current demand for electricity, the production of fly ash is expected to increase 3-5% annually. As per Ash Development of Australia (ADAA), 2012 (ADAA 2012), about 12.5 Mt of fly ash was produced in 2002, in which only 32.8% was utilized effectively of which only 10% in concrete and rest being used in other applications (Heidrich 2002). Therefore, replacing cement with higher amounts of pozzolana for the structural purpose should be widely accepted and should be accelerated to achieve sustainability in the construction industry (Malhotra and Mehta 2005).

HVFA system has a drawback of low early strength development. Well-cured super-plasticized HVFA concrete shows better strength and durability properties than OPC concrete (Malhotra and Mehta 2005). This study aims to improve early strength and properties of VHVFA mortar with 80%fly ash by using different strength improving mechanisms from the literature. Literature suggests the following methods which can improve the early strength of HVFAC when designed properly.

Addition of small amounts of limestone powder in the mix design which improved the early strength and mechanical properties of concrete which were investigated by many studies (De Weerdt et al. 2011, Bentz and Ferraris 2010, Barbhuiya et al. 2009, Antiohos et al. 2008). However, in VHVFA system, where replacement levels are 65% and above, smaller quantities of lime may not be adequate for full pozzolanic reaction.

A research by (Myadaraboina and Patnaikuni 2017),  concluded that addition of lime between 20-32% is optimum to react with 80% raw fly ash based on its calculated pozzolanic index.  And from another study on pozzolanic index of fly ashes by Myadaraboina et al., 2016 conveyed that Gladstone fly ash (UFFA) requires around 31% with 80% replacement of cement with fly ash. From both the studies, lime addition of 25-30% is considered for 80% replacement of cement has been taken for the present study with mortar with type E and UFFA.

Type of cement and w/b ratio

A study by Halse et al., 1984 suggests that cement with higher C3A (Type III cement) and fly ash with smaller size and higher surface area should be used to achieve high early strength (Halse et al. 1984). Malhotra and Mehta, 2005 also suggested to use type III cement (HES) cement with a w/c ratio 0.3, if the compressive strength of 15 MPa or more is required for 1 day.

According to Aïtcin, 2004, the use of w/b ratio of less than 0.4 becomes the requirement for producing high performance concrete (Aïtcin 2004).  It was argued in a study by Yasar, Erdogan & KilIç, 2004 that “the use of w/c ratio of 0.3 with the consequence of the decreasing workability, it is possible to produce the highest compressive strength result of concrete in comparison to higher w/c ratio”. A research by Poon, Lam & Wong, 2000 has shown that HVFAC will have better strength performance when they are prepared at lower w/b ratio. 0.24 to 0.19 (Poon, Lam, and Wong 2000). A, higher dosage of superplasticizer was required for mixes having HVFAC to achieve good workability with low w/b ratios for high strengths.

Addition or replacement of SF up to minor quantities such as 5-11% in OPC concrete will improve the early and later strengths and durability properties significantly. Research by Ting and Patnaikuni, 2011 shows that addition 10% SF gives optimum results (Ting et al. 1992). Hence, in this project addition of SF 5 and 10% were considered for optimum results.

This paper investigates combination of all the above-mentioned factors to improve the early strength of VHVFA mortar with cement replaced by 80% fly ash with addition of 30% lime and varying percentages of SF from 0, 5 and 10%. The study focused on analysing the effect of different quantities of SF additions on compressive strength up to 56 days of curing age of VHVFAC with 80% replacement of cement with class F fly ash.

For this study, a cement of HES Type III which conforms to the Australian Standard AS 3972, 2010, for Type HE cement was used. Class F fly ash from Gladstone (G) power plant and Microash (M) from Fly ash Australia Pvt Ltd, which conforms to the requirements of Australian Standard AS 3582.1 were used. Locally available uncrushed river sand conformed to  the Australian Standard AS 1141.5 2000 (AS 1141.5 2000) was used as a fine aggregate. The fine aggregate has a grading of size between 150 µm to 4.75 mm as specified. Tap water was used as mixing water. Table 1 presents the chemical compositions of Type I and Type III (HE) cements.

Table 2 presents the chemical compostion of fly ashes, lime and SF. Gladstone (Type G) fly ash and microash (Type M) comes under category of UFFA according to their particle size (Table 2). Microash is a special grade fly ash which conforms to the requirements of (AS 3582.1 2016) AS 3582.1 2016, Part 1. It is composed of very fine particles of spherical shape.

An experimental analysis was carried out of VHVFA mortars with 80% fly ash and 20% cement and 30% lime to check the effect of the addition of SF in amounts of 0%, 5%, and 10% on the compressive strengths and water absorption. The summary of mix proportion is shown in Table 3. Four mix proportions for testing high volume ultra-fine fly ash mortar for its compressive strength development and two optimum mixes for water absorption test were prepared.

The mix proportion of mortar in the experiment shows that the lower use of w/b ratio leads to the decrease of water volume in fresh mortar and results in higher amount of binder.  To achieve sufficient workability with low w/b ratio, 2% of superplasticizer is added to all mixes. The total binder in the mix proportion is around 550 kg/m3 and the superplasticizer content is between 26 – 33 litres/m3. The difference of the total binder in each mix proportion is caused by the specific gravity of ultra-fine fly ash and SF which are less than the specific gravity of Portland cement. The mix design and proportions of VHVFA mortar with SF are presented in Table 3 and Table 4, respectively. 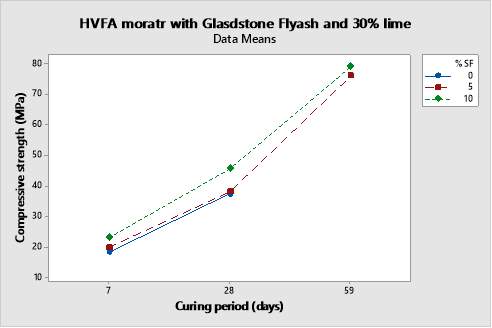 Water absorption test of mortar was conducted based on Australian Standard AS 1012.21 1999 (AS 1012.21. 1999) to study moisture transport in cement mortar as stated in Kim, Jeon & Lee 2012 (Kim, Jeon, and Lee 2012). The test was carried out after the curing age of mortar at 56 days. The type of absorption tested was immersed water absorption. In addition, the apparent volume of permeable voids (AVPV) was also determined. The results are given in Table 6.

To understand the influence of each factor on the compressive strength of mortar, the results were analysed in Minitab, a statistical analysis software. The results of the analysis using Minitab software consist of main effect plot, interaction plot and contour plot. The contour plot in Figure 5 shows that the mortar compressive strength shows maximum (>70 MPa) with SF percentages of 5 & 10 after a curing period of 50 days. However, maximum shows for 10% SF after 50 days. 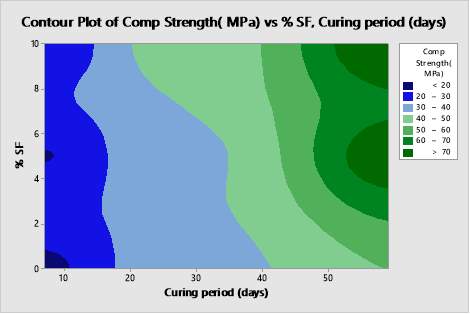 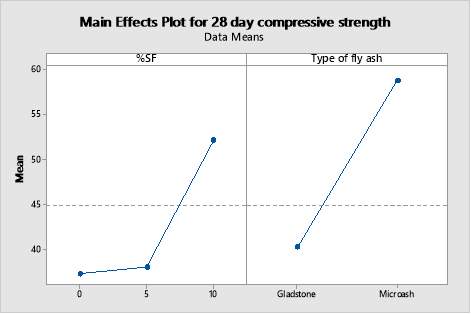 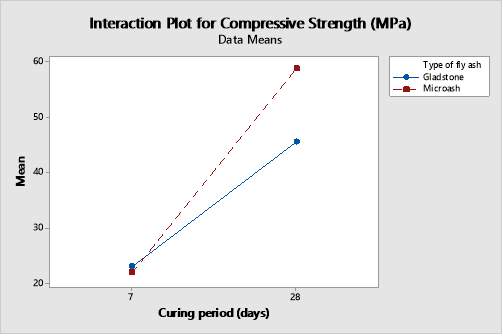 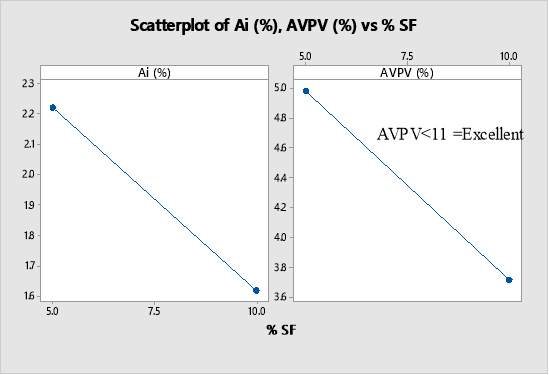 The results of immersed absorption indicates that the mortar produced using VHVFA mortar with 10% SF has higher compactness than mortar with 5% SF. Based on the AVPV values of vibrated cylinders (CCAA 2009), the high volume fly ash mortars with SF have an excellent level of durability.

This investigation on mortar compressive strength and water absorption convincingly support the hypothesis that VHVFA mortar with 80% replacement can produce high strength mortar using very large quantities of fly ash as high as 80% of volume of binder. This study also conforms with the other researchers stating that:

ADAA. 2012. Use of fly ash to enhance the sustainability in construction. Wollongong, Australia: ADAA.

AS 1141.5. 2000. Methods for sampling and testing aggregates – Particle density and water absorption of fine aggregate.

AS 3582.1. 2016. Supplementary cementitious materials for use with portland and blended cement – Fly ash.

Building materials refers to any material that is used for construction. Many different natural materials were used historically for building such as wood, clay, stone etc. but the material most commonly used in construction is now concrete. Experimental Investigation to improve the early strength and durability properties of very high volume fly ash mortar with addition of lime and silica fume Concrete is the most used material on earth ...

ABSTRACT Globally issues of environment and climate change are major problems. In 21st Century construction industry is at its peak (including dismantling concrete structures). It is the only time wh...

Response of a Reinforced Concrete Structure to Different Loads

CHAPTER 1  INTRODUCTION 1.1 GENERAL In this age of technology, studies on materials are being done at micro as well as nano levels. Concrete has been regarded as a low tech and well understood mater...