An Introduction to NMR 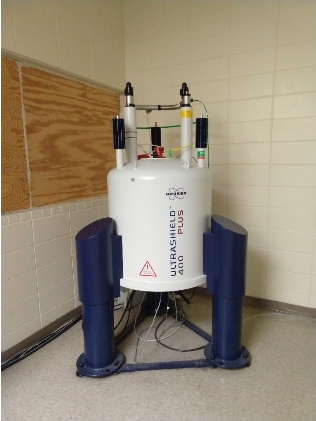 Nuclear Magnetic Resonance spectroscopy (NMR) is a technique that can be used for spectral elucidation of molecules. It is typically used to identify the carbon – hydrogen backbone of an organic structure. The first noted experimental observation of NMR was accomplished just after World War II in 1946 by two individual research groups at Harvard by Purcell and at Stanford by Bloch, whom both received the Nobel Prize in Physics in 1952 for their accomplishments1. In fact, NMR has been such a valued technique in the scientific community that advancements in the field have been awarded the Nobel Prize three separate times in 1952, 1991, and 20022.

Figure 1: 400MHz NMR at the University of Southern Mississippi’s Department of Chemistry and Biochemistry22.

The use of NMR in polymer and protein analysis has been of a more recent endeavor, as the overlapping of monomer units tends to allow for broadening of the 1H NMR peaks because the repeat units while chemically similar, still have different chemical environments causing a slight peak shift. This slight shift when summed over all similar nuclei will cause overlap to occur desensitizing the NMR spectra (Figure 2). Additionally, there is the issue of the protein being folded or unfolded. If the protein is folded there will be additional non-covalent interactions that 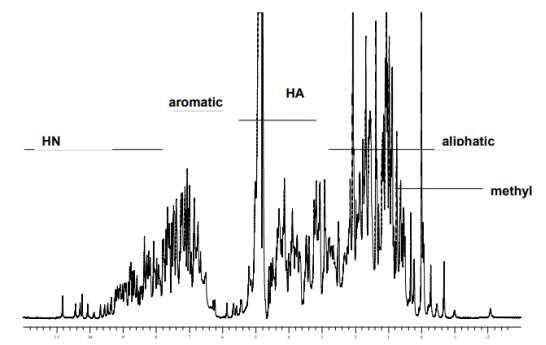 will increase the overlapping of NMR signals which can be seen in figure 2.

NMR is one of two methods to study the three-dimensional structure of proteins. Because of this, new techniques have been developed to analyze proteins using NMR. Typically, 1H, 13C, and 15N are the isotopes used to analyzed proteins due to their abundance in the desired molecules. 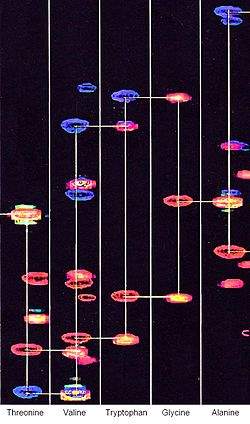 Additionally, the use of 2-D NMR techniques correlating two sets of nuclei, or with triple resonance experiments  that were more recently developed in the early 90’s3. Triple resonance experiments are a type of NMR correlation between 1H, 13C, and 15N which produces a three-dimensional plot that enables an individual to determine the back bone of the protein through the peptide bond linkage (Figure 2)4. While this can be a powerful tool in the elucidation of proteins, the chemical shift assignments remain a bottleneck for large proteins due to the faster relaxation times and the degeneracy of the 13Cα nuclei5.

More recent developments regarding the analysis of proteins by nuclear magnetic resonance is using dynamic nuclear polarization (DNP)6. DNP is where spin polarization is transferred from electrons to nuclei  resulting in the alignment of the nuclear spin are aligned with the electron spins. In DNP the samples are doped with a stable paramagnetic polarizing agent and irradiated with microwaves to transfer the high polarization in the electron spin reservoir to the nuclei of interest6. This enhances the NMR signals by transferring the large polarization of electron to nearby nuclei via microwave irradiation of electron nuclear transitions, making DNP a vital too in structural and mechanistic studies of biologically relevant molecules7.

The use of DNP as an enhancement to NMR has been of utter interest to protein NMR chemists recently. With this agenda in mind, several different enhancements to DNP-NMR have been achieved. Hilty was able to perform real time analysis of folding upon binding of a disordered protein by using dissolution DNP-NMR8. This allows for signal enhancements by dissolution DNP after rapid mixing allowing nuclei with lower sensitivity such as 13C. Direct 13C hyperpolarization of a protein allowed for a large chemical shift dispersion of the nuclei to assess structural changes during real time folding. Hilty was also able to manipulate hyperpolarized binding pockets using the nuclear Overhauser effect for determination of competitive ligand binding9. This allowed for DNP to polarize the 3H spins of one of two protein ligands by transferring of a fraction of the polarization of one ligand through the protein binding pocket to the second ligand. Garcia developed a method to reduce the strength of the magnetic field that DNP was able to work by using L-ban electron spin frequencies, allowing the magnetic field to decrease from 0.35T to 0.04T 10. Sergeyev was able to increase the efficiency of DNP by incorporating non-uniform sampling  to achieve time-effective collection of multidimensional data and by using fast magic-angle spinning (MAS) to provide optimal sensitivity and resolutions11. This allowed for the efficient assignment and NMR analysis of an intact Pf-1 virus using sequential side-chain correlations and DNP sensitization. Rosay also utilized MAS in combination with solid state NMR (SSNMR) to determine the structures of molecules in states that are otherwise not accessible by X-ray or solution NMR experiments12.

With these advancements, DNP has made the elucidations of proteins more efficient and accessible. Alexandrescu was able to make 1H NMR assignments of aromatic residues in bovine, human and guinea pig variants of α-lactalbumin by using photochemically induced DNP which enabled assignments to be made in otherwise ambigous areas of the protein structure13. Additionally, Williams also used photochemically induced DNP to study calcium binding proteins such as histidine microenvironments in α- and β-parvalbumins. Other interactions between proteins and carbohydrates were analyzed by Siebert et. al. by using a combination of DNP NMR, electrospray ionization mass spectroscopy and molecular modelling14. This brought about more interest in using DNP in conjugation with molecular dynamic (MD) simulations through the work by Sezer, who was able to calculate DNP coupling factors through the synergestic use of MD simulations and modeling the diffusion of hard spheres with spins as applied to nitroxides in water15. The Griffin group demonstrated that DNP enhanced MAS NMR experiments performed at 100K was able to produce NMR spectra with excellent signal-to-noise ratios and sufficient resolution to observe intermolecular heteronuclear correlation in mixed samples confirming a parallel in register structure in amyloid fibrils16. The structural analysis of HIV-1 protein assemblies was able to be determined by Gupta et. al. by utilizing DNP based MAS NMR securing structural analysis of multiple well-resolved isoleucine side-chain conformers; unique intermolecular correlation across two CA molecules; and conformationally disorder states that are otherwise not visible at ambient temperatures 17.  Chappuis reported the combination of dissolution DNP and water-LOGSY (ligand observed via gradient spectroscopy) in view of high-throughput detection of protein ligand interactions18. The determination of the cholesterol-binding site of eukaryotic membrane proteins in native like lipid membranes was made possible through Elkins by using low temperature DNP19. Of note is work by Kendra K. Frederick who has applied DNP NMR to investigate the structure of a protein containing and environmentally sensitive folding pathway and an intrinsically disordered region20. More recently her work has focused on combining DNP NMR with segmental and specific labelling to study a yeast prion protein strain by measuring long range interactions to distinguish between to models for the arrangement of monomers in amyloid fibers21.

Dynamic nuclear polarization has been shown to be an essential tool in the structural elucidation of proteins, as well as helping to establish structural conformation of protein interactions. Due to is invaluable nature the future of this application will most likely head toward increasing the accessibility of the method. Typically, protein NMR has to be carried out on larger NMR magnetics that have magnetic fields greater than 600MHz, for long periods of time. Because of this analysis of proteins can be quite expensive. DNP helps to decrease the need for such large magnetic fields and has been decreasing overall analysis time. Thus, it is feasible to say that the future of DNP NMR is to make the application more accessible and enable analysis and structural elucidation of proteins on smaller NMR (<400MHz) and to make the experiments last minutes versus days.

22. Figure 1 was photographed by the author. Figure 2 was taken from “Introdution to Protein NMR Spectrocopy” by James Chou file:///C:/Users/HP/Downloads/method2.pdf . Figure 3 was taken from https://en.wikipedia.org/wiki/Triple-resonance_nuclear_magnetic_resonance_spectroscopy .

Sciences covers multiple areas of science, including Biology, Chemistry, Physics, and many other disciplines.

CFD Modelling of Venturi Meters At Low Reynolds Numbers Abstract This study focused around low Reynolds number flows, between 200 and 20,000, these flows are usually associated with slow moving hig...

Assessment Task Topic: The Photoelectric Effect 1. Introduction The photoelectric effect is the name given to the phenomenon whereby electrons are emitted from a metal when exposed to electromagnetic ...