The first OP was synthesized in 1850, leading to the use of an OP (physostigmine) to treat glaucoma in the 1870s (Dyro, 2016). OPs were later used as a pesticide in 1930s Germany (Dyro, 2016), for treatment of musculoskeletal and autonomic disorders, and some were used as experimental treatments for parkinsonism (Dyro, 2016). With emergence of World War II, the German military developed OP-based biological weapons (i.e. nerve agent) throughout the 1940s (Dyro, 2016; Gilbert, 2014). Modern derivatives of nerve agents include “sarin, soman, and VX” (Gilbert, 2014).

Organophosphates (OP) are a group of chemicals that are generally used as an insecticide and herbicide, replacing to the currently banned organochlorines (Fishel, 2005). OPs are used in a variety of settings (i.e. agricultural, domestic, etc.) and are poisonous to insects and mammals (CDC, n.d.; Fishel, 2005; Gilbert, 2014), and are currently the most widely used insecticide worldwide (Fishel, 2005). OP exposure has been responsible for a number of poisonings worldwide (Gilbert, 2014). In a broad sense, OPs are created with the reaction alcohols and phosphoric acid (Dyro, 2016). The chemical structure of OPs differ from other central nervous system effecting pesticides, such as carbamates, but the mechanism of toxicity is the same between the two (Gilbert, 2014). Both OPs and carbamates cause an overstimulation of acetylcholine in the central nervous system by blocking  acetylcholinesterase enzymes (Gilbert, 2014). The structure of OPs is defined by certain features, which is illustrated in Figure 1. OPs have phosphoryl group (i.e. a double-bonded oxygen or sulfur to a phosphorus), two lipophilic functional groups (R1 and R2), and a leaving group (X) that is the most sensitive to hydrolysis (Carullo, 2015). 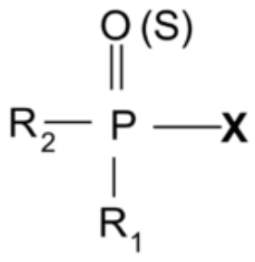 The most commonly used OP insecticides used in agricultural settings are disulfoton, azinphos-methyl, and fonofos (Dyro, 2016). The most commonly used OP insecticides for lawn and gardening use are diazinon and chlorpyrifos (Dyro, 2016), both of which have been deregistered for indoor use. There are currently thirty-six OP pesticides registered for use within the United States (EPA, 2013). Currently the most widely used pesticide in the world (Fishel, 2005), OPs are used mainly used in agriculture settings, but have also been used in household (Dyro, 2016) and public health applications (Than, 2013). The use of OPs to eliminate mosquitoes harboring the infamous West Nile Virus (Than, 2013) and Zika Virus (Schmidt, 2016) are a recent examples of using a OP insecticide as a public health initiative. In the United States, strict regulation are implemented to ensure farmers do not exceed concentration limits on crops they produce; other countries, however, are less stringent on enforcement and concentration limits, which has led to OP poisoning via food contamination (National Center for Chronic Disease, 2014).

The EPA defines an OP alternative as a “conventional pesticide use that represents a significant alternative to chemical or chemicals belonging to the organophosphate class of insecticides” (EPA, 2016). The EPA labels these alternatives as “reduced risk pesticides,” which are described in the section 3(c)(10) of the Federal Insecticide, Fungicide, and Rodenticide Act (FIFRA) (EPA, 2018b) as a pesticide that may “reduce the risk of pesticides to human health, reduce the risk of pesticides to nontarget organisms, reduce the potential for contamination of groundwater, surface water or other valued environmental resources, and/or broaden the adoption of integrated pest management strategies or make such strategies more available or more effective” (EPA, 2018b). Currently there are 250 OP alternatives that have met the criteria to be an OP alternative, all of which can be found on the EPA website (EPA, 2018b).

The past decade has led to the congress passing legislation that has discontinued the use of some OP insecticides, such as parathion and chlorpyrifos (EPA, 2013). For example, the use of parathion is no longer registered for any use (EPA, 2013), as it is “extremely toxic for acute inhalation, oral, and dermal exposures” (PubChem, 2018); while the use of chlorpyrifos, which is currently undergoing registration review (EPA, 2018a), is no longer registered for use in household settings but is the most widely used pesticide for the production of corn (EPA, 2013, 2018a). A voluntary phase-out of some OPs, such as diazinon and chlorpyrifos, occurred just after the turn of the century when the EPA reached agreements with the pesticide industry (Dyro, 2016). Diazinon, a commonly used ingredient in Real Kill, Ortho,and Spectracide that was widely used for lawn and garden applications in the United States for almost a half century and sold approximately “14.7 million pounds” annually (Dyro, 2016). The EPA reached agreements with the pesticide industry for the discontinued production of diazinon for indoor use in March 2001 and for lawn and garden use in June 2003 (Dyro, 2016). Chlorpyrifos, also known as dursban, was phased out for household use in June 2000 after it was found that it posed a significant risk to children, who represented approximately 34% of the reported 6% of overall exposures reported to poison control centers across the United States (Dyro, 2016; EPA, 2018a).

All OP insecticides are highly acutely toxic when received orally (i.e. ingestion), while several OP insecticides are highly acutely toxic through dermal absorption (Casarett, 2010). OP’s primary mode of action is by the phosphorylation of the acetylcholinesterase enzyme (AChE), ultimately resulting in an overstimulated effector organ due to the excess acetylcholine (ACh) (EPA, 2013). OPs are AChE inhibitors (AChEI) (i.e they inhibit AChE from binding with ACh) (Čolović, Krstić, Lazarević-Pašti, Bondžić, & Vasić, 2013), and mechanism of toxicity in insects is the same as for mammals— blocking the AChE— causing nerve and respiratory distress that leads to death of the insect (Gilbert, 2014). Vesicles releases ACh in the synaptic cleft after a neuron is fired, which then bind with one of two types of ACh receptors (AChR), nicotinic (NAChR) and muscarinic (MAChR), on the opposite side of the cleft (Casarett, 2010; Dyro, 2016). AChE, necessary for controlling the impulse transmissions between nerve fibers in the synaptic cleft, is responsible for preventing the excess build-up of ACh (Fishel, 2005). Introducing an AChEI to the system, such as an OP, prevents the deactivation of ACh and creates a build-up of ACh in the cleft (Dyro, 2016). This build-up of ACh overstimulates the effected organs and causes unregulated nerve pulses (Čolović et al., 2013; Fishel, 2005). The mechanisms by which OPs act as a nerve agent is depicted in Figures 2-4 (PEHSU, 2007). 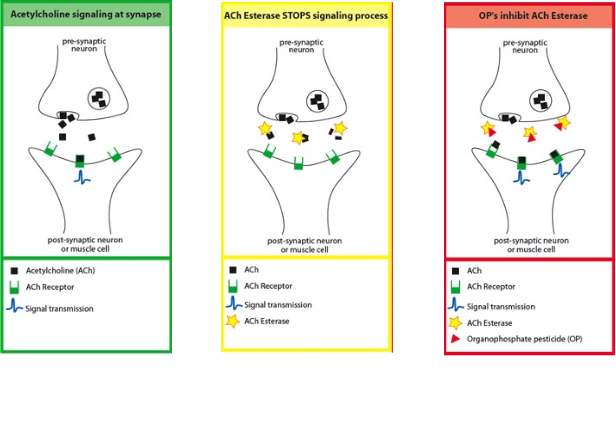 Figure 3    ACh Esterase breaking down ACh in the synaptic cleft

American Conference of Governmental Industrial Hygienists (ACGIH) suggest threshold limit values (TLV) ranging from 0.05 to 10.0 mg/m3, depending on the OP compound and route of exposure (ACGIH, 1998). The extent of the poisoning is dictated by the amount and route of the exposure (i.e. how much introduced and how was it introduced into the body). Inhalation, ingestion and dermal absorption are all considered exposure routes of OPs, while the main target organs of are the central nervous system (CNS), respiratory system and cardiovascular system (Temple, 1989). Signs and symptoms of OP exposure include excessive miosis (excessive pupil constriction), urination, diarrhea, diaphoresis (sweating), lacrimation (tears), and salivation (Casarett, 2010; PEHSU, 2007). A “hallmark” sign of severe OP poisoning is respiratory failure (Casarett, 2010). Immediate treatment at a medical facility is required in the event of an OP poisoning. The route of exposure(s) dictate how the poisoning will be treated (Casarett, 2010).

Environmental bioaccumulation of OPs is rare, as they break down into other chemicals rapidly after being exposed to the environment, however rain runoff from crops can lead to the high concentrations of OPs in the environment and can contaminate well water (CDC, n.d.).

Symptoms of cute poisoning to OPs can arise during or after exposure, which ultimately depends on the route, duration, and concentration of exposure to the subject (Fishel, 2005). Regarding the route of exposure, inhalation produces the fastest symptom response, followed by gastrointestinal, and then dermal (Fishel, 2005). Early symptoms of OP exposure include “headache, nausea, dizziness, sweating, and salivation” (Fishel, 2005). Symptoms that suggest a worsening condition are “muscle twitching, weakening, vomiting, abdominal cramps, and diarrhea” (Fishel, 2005).

The immediate aim for treating OP poisoning is decontamination (dermal) and/or reduce absorption (ingestion), although procedures for reducing absorption after ingestion appear to not be effective (Casarett, 2010). Measuring AChE levels in butyrylcholinesterase and red blood cells (RBC) can confirm OP poisoning in an individual (EPA, 2013). Patients experiencing OP poisoning are often administered atropine and/or pralidoxine (2-PAM) (Casarett, 2010). Atropine is often administered first, as it is often considered a “life-saving agent in organophosphate poisonings”; however, atropine is not effective against nicotinic actions at the NAChR, and the administration of pralidoxine is required (EPA, 2013). Signs and symptoms can help healthcare providers in determining what receptor(s) (MAChR or NAChR) are been affected and which medication is required to be administrated. For example, administration of atropine would follow the signs and symptoms for the overstimulation of MAChR (EPA, 2013): diarrhea, urination, miosis (constriction of the pupil), bronchospasm, emesis (vomiting), lacrimation (excess tearing), salivation, bronchorrhea, hypotension, bradycardia. Overstimulation of MAChR can best be characterized by respiratory distress (EPA, 2013). Another example is the administration of pralidoxine, as it would follow the signs and symptoms for the overstimulation of NAChR: tachycardia, mydriasis, hypertension, sweating, paralysis, muscle weakness and/and fasciculation (EPA, 2013). Overstimulation of NAChR can best be characterized by neuromuscular distress (EPA, 2013).

Generally, the mortality rate is low for individuals treated within a short time span of being exposed (Dyro, 2016). Prior to the deregistration of many OP pesticides, 11 deaths and 16,392 poisonings were reported in the United States in 1998 as a result of OPs, but those numbers are speculated to be an underestimation, as most agricultural workers do not report OP poisonings (Dyro, 2016). As of 2008, OPs are estimated to be responsible for killing over 200,000 people a year globally (Eddleston M, 2008). OPs have also been popular among developing countries as an agent for committing suicide (Dyro, 2016).

CDC. (n.d.). What are organophosphates?   Retrieved from https://www.cdc.gov/nceh/clusters/fallon/organophosfaq.htm

EPA. (2018a). Chlorpyrifos.   Retrieved from https://www.epa.gov/ingredients-used-pesticide-products/chlorpyrifos

Than, K. (2013). Organophosphates: A Common But Deadly Pesticide. National Geographic.

Farming is the business or activity of working on a farm. Farming activities include ground preparations, sowing or planting seeds, tending crops, or activities involved in the raising of animals for meat or milk products. CHAPTER 1 The aim of this study is to see those factors which affect the prices of farm foods product. For this purpose several different variables have been taken as under consideration which may aff...

The Role of Organic Farming for Small-Scale Farmers in Latin America Table of Content 1. Executive Summary 2. Introduction 3. Organic certification, a guarantee of trust for small-scale produce...

This paper focuses on the importance of the adoption of image processing technologies for the soil quality, detection of plant diseases and for the quality grading of fruits in agriculture....