The aim of the study is to assess patient knowledge and attitude toward replacing missing teeth with prosthesis in eastern province, Saudi Arabia.

This is a cross-sectional study. The study subjects were recruited from: University of Dammam in Dammam City, Primary Health Care Centers in Alhasa City, and health educational campaigns in the same area. Date was collected through Self-administered surveys. In the self-administered survey following information was obtained: demographic information, systemic diseases, the need to replace missing teeth, the effect of losing teeth on appearance, the effect of losing teeth on chewing ability, causes of teeth loss, preferred treatment option, Factors create hindrances for treatment. Also, Professional assessment of patients’ needs was done by trained dentists through examination sheet to assess the need of esthetic or functional restoration. Statistical analyses were performed using the SPSS (Statistical Package for the Social Sciences).

Patient’s perception of functional and esthetic needs was variable among the population in comparison to professional assessment of patients needs. Dental caries preventive measures application will reduce loss of teeth significantly. The result of this study will be a baseline data for any further future studies.

Assessment of prosthodontic patients need based according to the location and length of edentulous space (Bjorn and Owall, 1979, Smith and Sheiham, 1980).  (Bjorn and Owall, 1979) reported that social and esthetic reasons were the basics for restoring missing teeth and not only relies on professional assessment. Several studies stated the presence of disagreement between dentists and patients assessments (Locker and Slade, 1994, Palmqvist et al., 1991, Smith and Sheiham, 1980, Vigild, 1987).

Replacement of missing teeth to restore function and esthetic had different modalities of treatment which is dental implant, fixed partial denture and removable partial denture. Each modality has its own advantages and disadvantages (Christensen, 2000). The final treatment decision is affected by several factors and its case dependent. If more than one option possible, the definitive prosthesis will depend on patient’s decision. It is considered to assess knowledge and attitude toward prosthesis just to ensure patient satisfaction (Kvale et al., 2004, Udoye et al., 2005). Therefore, the final decision of treatment cannot depend on the opinion of dentist alone, but should be discussed closely with the patient (Sheiham et al., 1982).

Teeth play a major role in reflecting the personality and the positive attitude regarding self-image. Loosing of teeth will reduce the quality of life affecting psychologically, socially, and emotionally. Nowadays, the dentistry correlate the emotions and psychologically of patients in relation to dental situations especially esthetics (Levinson, 1990).  Losing of teeth is very traumatic which can disturb social activity that requires significant psychological readjustment (Fiske et al., 1998, Omar et al., 2003).

In Europe, the frequency of removable dentures varied between 13-29%, with 3-13% wearing upper and lower complete dentures (Zitzmann et al., 2007). Due to lack of oral health care of Sudanese adult population, replacement of missing teeth by prosthesis was uncommon. 57% of the study subjects are in need for prosthetic replacement (Khalifa et al., 2012). The prevalence of prosthodontics replacement on Chinese adult population was founded that 62% of the subjects had no tooth replacement, 30% replaced by FDP and 11% replaced by RDP. 3% of the subjects had both FDP and RDP. Most of the subjects replacing missing one or two teeth by FDP but if more than two teeth are missing were replaced by RDP (Zhang et al., 2012). In a local study conducted in Riyadh in 2003, the result shows that the most commonly missing tooth was mandibular first molar followed by mandibular second molar. This study reveals that 63% of the study subjects (Saudi males) did not replace their missing teeth (Akeel, 2003).

The aim of the study is to assess patient knowledge and attitude toward replacing missing teeth with prosthesis and compare it with professionally assessed clinical needs in eastern province, Saudi Arabia.

This is a cross-sectional study. This study was conducted between April 2014 and August 2014 through self-administered surveys.

The subjects were divided into 4 age groups: 18-25, 26-35, 36-45, and <45 years The study sample recruited from: University of Dammam (College of Dentistry) in Dammam City, Primary Health Care Centers in Alhasa City, and health educational campaigns in the same area.

Professional assessment of patients’ needs was done by trained dentists through examination sheet. Examination sheet reflect the following information: number of missing anterior or posterior teeth. The need for functional or esthetic restoration according to the following criteria: At least 1 missing anterior tooth (incisor, canine, or premolar) constituted a need for esthetic restoration. At least 3 missing posterior teeth (premolar, first molar, second molar) constituted a need for functional restoration. Also, the provided prosthesis type was recorded if the missing tooth was restored.

Statistical analyses were performed using the SPSS (Statistical Package for the Social Sciences) data analysis software package version 18.0 and a P-value of less than 0.05 was considered significantly different. The study was approved by the Ethics Committee of the College of Dentistry, University of Dammam.

Patient’s self-assessment of the impact of missing teeth on appearance varied among subjects.  In our study 66.7% of the subjects had esthetics concerns about losing of teeth. This is in agreement with earlier studies that reported wide variations in the impact of tooth loss (Locker and Slade, 1994, Rosenberg et al., 1988, Sheiham et al., 1982).

2.9% of our study population prefers not to restore their missing teeth. In a Malaysian study, whether the losing anterior of posterior teeth the subjects not concerned in replacing of that teeth (Razak et al., 1990). Liedberg et al. (1991) found in a Swedish population no perceived to replace the high prevalence loss of premolar and molar teeth. Gradual losing of teeth over the time allow for patient to adapt with his appearance and chewing ability that is why the geriatric population may not perceive the need for replacing missing teeth (Pallegedara and Ekanayake, 2005).

Many of the participants 26 participants  (25.49%) had an esthetic concerns of missing molars while 12 participants (11.76%) did not had concerns about losing of premolars. Rosenberg et al. (1988) noted that esthetic is priority for the patient followed by the functional factors in replacing missing teeth.

Kayser et al. (1988) stated that the perceived needs for replacing missing teeth only if it’s affect appearance or mastication. In other hand, the old people by multi-missing teeth give the priority to the mastication rather than appearance (Shigli et al., 2007). In our study 83.3% of the subjects reported his mastication were affected by losing of teeth. 31% of the participants considered his chewing ability affected by losing of any tooth while 6% of the study subjects no perceived needs for functional restoration by losing of three or more molars teeth.

Patient perceived need for replacement of missing teeth affected by socioeconomic status. Individuals who had a lack of education, low financial resources and needs for preventive services more appropriate to have a neglected dental health care (Marcus et al., 1996). The availability of governmental centers that provide free dental treatment made the major reason for non-replacing missing teeth was the late appointment which was 53.9% followed by 33.3% of study subjects gave an economic reason.

The main cause of losing teeth is a dental caries in our study that correlate with other studies (Corbet and Davies, 1991, Khalifa et al., 2012). It is inaccuracy to be known about the reason of extraction because it relies on subjective information that provided by individual. Also, molar considered the most loss teeth and mainly due to dental caries, rather than lower incisors that loss mainly due to other than dental caries (Kida et al., 2006, Manji et al., 1988).

Patient’s perception of functional and esthetic needs was variable among the population in comparison to professional assessment of patient’s needs. Dental caries preventive measures application will reduce loss of teeth significantly. The result of this study will be a baseline data for any further future studies. 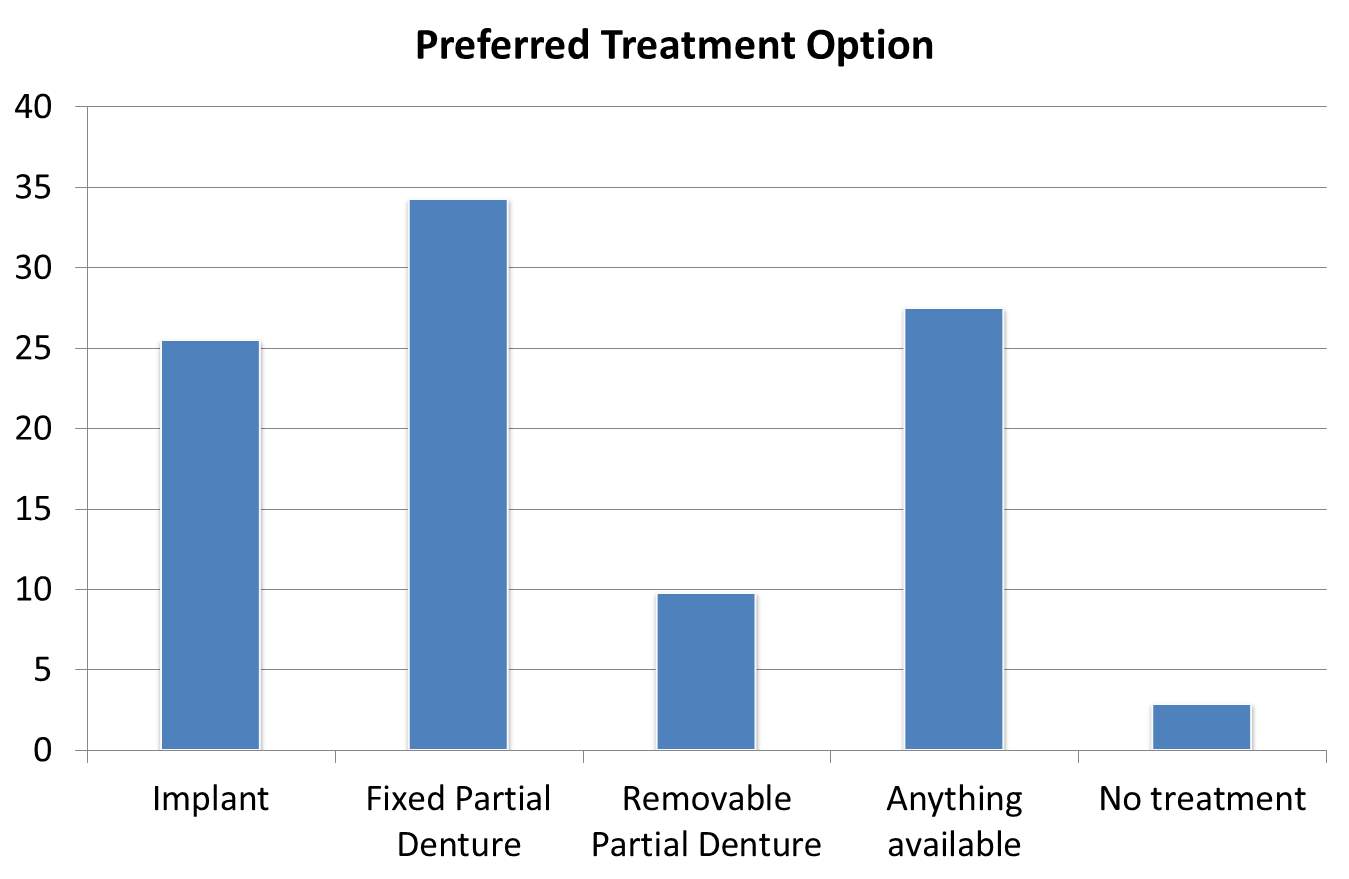 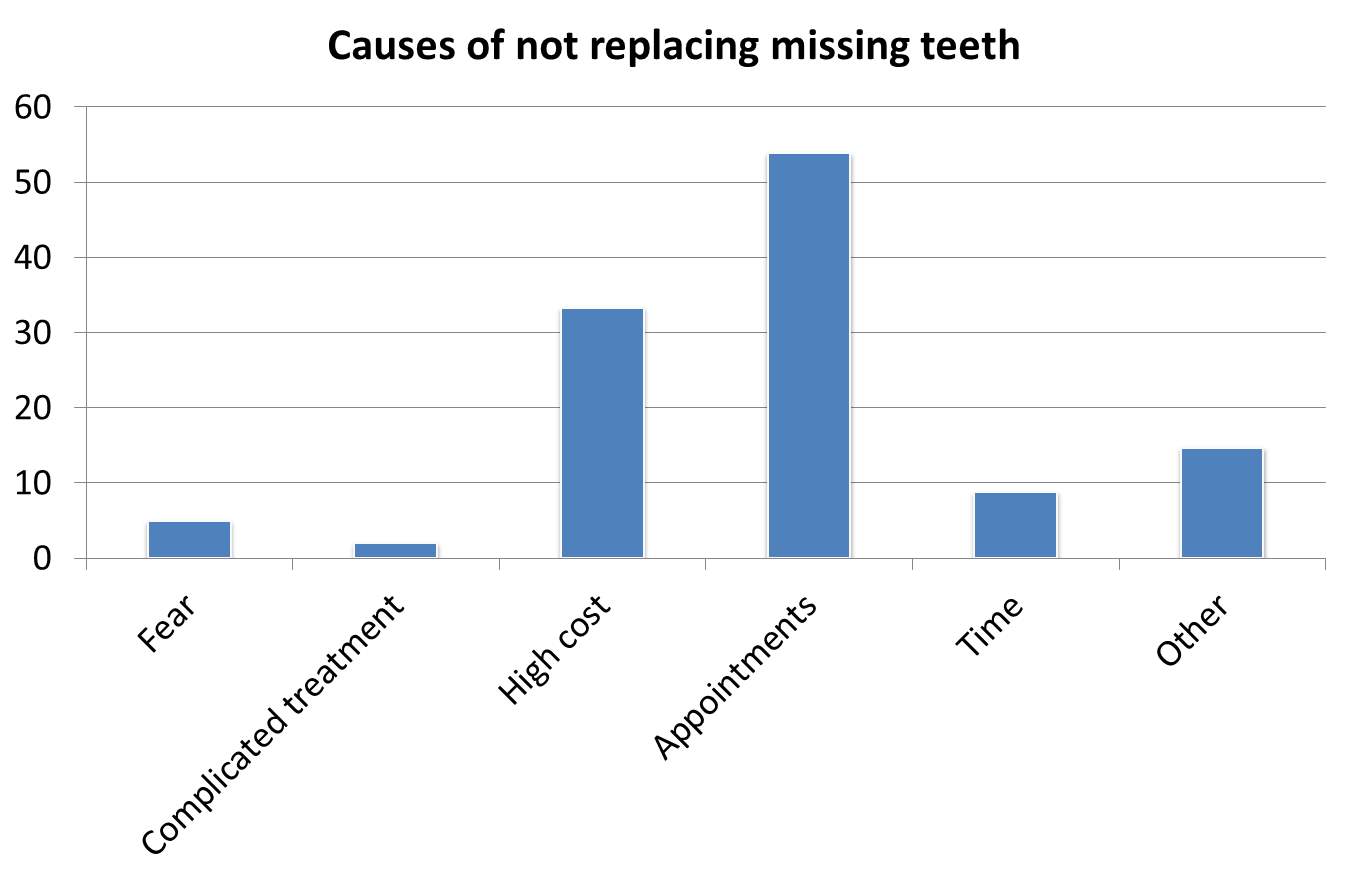 Dentistry is a branch of medicine that involves treating and preventing issues relating to your teeth, gums, and jaw. Dentistry not only ensures that you have a healthy mouth, but it can also have a positive impact on your general health and well-being. With the increase in the incidence of antibiotic resistance by bacterial dental biofilms, efforts were directed to nature and its elements for therapy and cure....

Efficacy of Photodynamic Therapy in the Treatment of Dental Caries

the purpose of the present study was to review the pertinent literature regarding efficacy of aPDT in management of dental caries as an adjunctive treatment by reducing viable count of cariogenic bacteria....