Influenced by Smith’s (1776) concept of the ‘Invisible Hand’, economists largely believe that there is a positive correlation between increased trade liberalisation and societal welfare (Mueller, 2003). Despite this, restrictions to trade, such as tariffs and quotas, have remained a source of political debate since the implementation of the General Agreement on Tariffs and Trade in 1948. In market driven economies, trade restrictions are ubiquitous and induce economic rents, defined as an increased income which ‘cannot be reduced or eliminated by normal competitive factors in the economy’ (Johnson, 1991, p.328). Krueger (1974) coined the term ‘Rent Seeking’ in relation to economic investments made to impact distributive outcomes to the benefit of the investor.

Whilst rent seeking can be socially desirable when encouraging innovation in competitive economies (Tollison, 1982); this essay seeks to outline the ways in which undesirable rent seeking negatively affect consumers, with a key focus on welfare cost models, using qualitative and quantitative data to explore why rent seeking through trade barriers remains successful despite its consequences. The welfare loss models of Harberger (1954) and Tullock (1967) indicate the indiscernible nature of rent seeking activities, and so their success will be defined by their persistence over time. Information dissemination, economic costs and Olson’s theory of collective action (1965) will be drawn upon to exemplify contributing factors to the perpetuation of artificially contrived rents.

Trade barriers restrict market entry of particular goods and services in order to benefit domestic producers (Lopez and Pagoulatos, 1994). Restrictions in supply, facilitate monopoly creation and the maintenance of artificially high prices by eliminating cheaper sources of competition and reducing consumer purchasing power (Dye, 1938). People aim to acquire the ‘maximum amount of goods for the minimum purchasing power’ (Dye, 1938, p.22). Monopoly creation through trade restrictions incites a double disadvantage to consumers – they pay higher prices in return for a lower quality product. The German cotton prices exemplify this, where consumers’ access to markets in the developing world are restricted, and so they must pay 20% more for lower quality, domestically produced cotton (Brown, 1992).

Rent Seeking also harms consumers’ perception of politics. The market mechanism rewards and caters for the rich and connected whilst simultaneously increasing inequality by excluding poorer and less organised consumers and foreign producers (Krueger, 1974). This can lead to more rent seeking from consumers to alter current outcomes (Buchanan, 1980). Antithetically, negative perceptions could cause apathy amongst lower and middle-class consumers with regards to political systems they feel unable to change, thus granting uncontested perpetuation of rent seeking (Kahana and Nitzan, 1999). Globally, rent seeking through trade barriers widen the gap between rich and poor. Anderson’s (2004) quantitative analysis of national variations in the benefit to cost ratio of reducing tariffs concludes that developing countries are hit the hardest and would receive the greatest economic benefit ($216billion) from a 50% reduction in tariffs.

However, according to Johnson (1991) the fundamental impact of rent seeking through trade barriers is not the transfer of wealth, but the opportunity costs of rent dissipation. Nations’ resource allocation efficiency is impeded by the wasteful practice of bribing lawyers and lobbyists. This harms consumers at the expense of more productive means, such as social welfare provisions.

Harberger’s (1954) welfare cost model, graphically represents changes to economic surpluses in order to measure the deadweight losses resulting from trade restrictions as shown in Figure 1. The shaded triangle, known as Harberger’s triangle, represents the losses to consumers caused by the inefficiency of tariffs, estimated at <1% of GNP (Scwarzman, 1960). But Tullock (1967) asserted that Harberger miscalculated costs by failing to recognise the aforementioned wasteful rent seeking expenditures used to transfer wealth. In this respect, Tullock’s (1967) rectangle (PC, PM, A, B), depicting welfare losses including the cost of all failed and successful rent seeking activities, were included in subsequent cost evaluations. From this, average social costs of rent seeking fluctuate between 7 and 22.6% of GDP, with estimates of costs in the USA reaching as much as 50% of GDP (Laband and Sophocles, 1988). 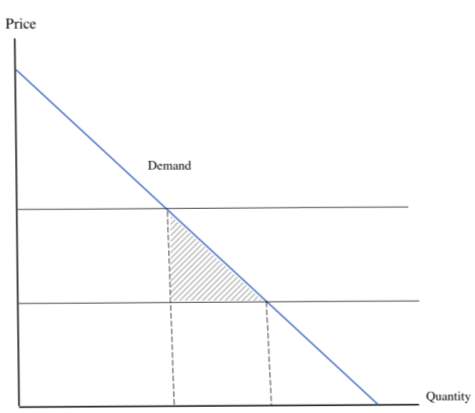 The European Union’s Common Agricultural Policy (CAP) epitomizes how minority interest groups cause long standing social and economic losses. The CAP summons 40% of the EU budget (European Commission, 2018) and increases British food prices by an average of 17% (IEA, 2013). This costs British tax payers £30 billion, whilst positively impacting a mere 5% of the population – those in agricultural production.

Despite much of the conventional literature focussing on the negative side of rent seeking; analysing self-interested behaviours and quantitative losses to consumers – it is clear that rents would not exist if there were no broader successes to be gained from their existence (Applebaum and Katz, 1987). Brecher (1982) states that rent seeking through trade barriers is in fact, welfare enhancing, suggesting they can increase employment opportunities and incomes without disturbing national income. For example, UK tariffs on cigarettes help to increase public health, whilst contributing over £12billion to government tax revenues (FullFact, 2015), which can be used in welfare enhancing schemes.

Levels of trade protection positively correlate to levels of unemployment (Takacs, 1981) as trade restrictions are often implemented in retaliation to an adverse event to protect domestic producers and consumers (Kurth, 1979). This implies that rent seeking through trade barriers can help to reduce unemployment and increase wages through monopoly creation. The longevity of trade barriers can also result in greater economic stability, as a one-off lobbying cost creates persistent and reliable trade outcomes.

Explanations for the Perpetuation of Rent Seeking Through Trade Barriers.

Interest group organisation is pivotal to the allocation of economic rents. Minority interest groups in concentrated industries benefit significantly where collective action problems are smaller, and their large market share means greater economic incentives (Mueller, 2003). In privileged groups, individuals within monopolising firms overcome the collective action problem and pursue rent through the implementation of trade restrictions, due to their expectation of substantial economic gains (Olson, 1965). Adopting Buchanan’s (1980) assumption that politicians are self-interested, economists argue that politicians establish and allocate these rents with the aim of gaining political endorsements to further their campaigns and increase their chances of election (Goldberg and Maggi, 1999). Without implementation of greater government accountability measures, the unfair actions of rent seeking will perpetuate.

The principal-agent problem facilitates this type of rent seeking as voters cannot control their elected representatives and are veiled to the full extent of their behaviours (Hindmoor and Taylor, 2015). Collectively, consumers struggle to act against inefficient rent seeking activities due to their intermediate group size – individuals typically remain rationally ignorant, as no one has a strong enough incentive to act individually, largely due to insufficient knowledge of rent seeking costs (Olson, 1965, p.65). Anderson (2004) argues that better information dissemination could induce a reduction in inefficient rent seeking activities. The current models estimating welfare losses range from 1% to 50% of GNP. More precise data would better inform consumers about the disadvantages, providing greater incentives for them to overcome the collective action problem.

However, politicians are still able to masquerade self-invested decisions as a noble choice for the public good, perpetuating rent seeking through trade barriers. They do this by implementing broad policies that satisfy the majority demand, whilst focusing specificities on minority, well organised or fee-paying interest groups. The EU CAP epitomises this: although intended to protect the environment and support European food security, in reality, it leads to overproduction, and environmental degradation caused by agro-industrial conglomerates – neglecting those who should benefit the most from it (Debating Europe, 2016). This illustrates how unproductive rent seeking activities can remain successful by publicly omitting negative consequences and accentuating positives (Hindmoor and Taylor, 2015). Contrarily, much of the rent seeking literature omits high level informational asymmetries between governments and lobbyists. Governments can be presented with incorrect or exaggerated information by lobbyists in order to secure a decision (Helm, 2010). In Helm’s (2006) report on Climate change policy, he notes how government decisions can be misguided by trusted think tanks that use intellectual authority to misrepresent information for economic gain from interest groups that seek unproductive economic rents such as tariffs and quotas.

Despite a lack of action, the welfare losses associated with protectionism have been recognised by governments – who are beginning to actively negotiate mutually beneficial bilateral and multilateral trade agreements rather than a reduction in protectionism altogether. The perpetuation of rent seeking through trade barriers is often justified by the economic and social costs of reducing subsidies and trade barriers such as expenditures on negotiations, think tanks and supporting policy documentation as well as a firm’s private costs of adjustment. When exposed to international competition, businesses may be forced to downsize or even close (Francois, 2003). This can financially pressurise social security schemes such as unemployment benefits for those who may lose their job, or the police force with expected increases in crime due to unemployment (Anderson, 2004). The perpetuation of rent seeking activities protects society from such threats.

Both consumers and markets have acclimatised to an economy of unproductive rents such as tariffs and quotas, to the extent that it has become difficult to discern whether we could operate without them. Overall, this essay suggests that the perpetuation of rent seeking through trade barriers is not necessarily success related – but largely because trade restrictions and rent seeking activities are so engrained that they have become more difficult to eradicate, than to simply permit. The perpetuation of trade barriers is multifaceted and cannot be reduced to simplistic generalisations. This essay has explored some explanations for the perpetuation of rent seeking through trade barriers, but further research, is required to identify and rationalise the reasons behind pervasive trade restrictions caused by rent seeking activities.

Smith, A. (1976) An Inquiry into the Nature and Causes of the Wealth of Nations. Oxford: Oxford University Press (originally published 1776).

Real estate consists of land and the buildings and natural features or resources upon it or attached to it, such as trees, water, bridges, fences etc. Assessment 2: Case Study: City Surf Real Estate has been operating for over 2 years. You commenced working for the organisation six months ago as a residential property sales agent. Since its inc...

Real Estate Investment Trusts in China: how can we learn form American model to develop our REITs system?   Ouyang Chun Abstract The real estate market is a burgeon market and is an essential part in...