(1) where  is the time delay and m the embedding dimension. Determining appropriate parameters is not trivial and includes several methods such as Average Mutual Information AMI (Fraser and Swinney [20]), Autocorrelation Function ACF (e.g. Holzuss and Mayer-Kress , 1986) or Correlation Integral CI (e.g. Leibert and Shuster, 1989). From these methods the Average Mutual Information is considered the best since it reflect non-linear properties and thus not require large amounts of data, otherwise required by CI and ACF. The AMI approach sets the time delay as the first minimum of the Average Mutual Information, a method suggested by Fraser and Swinney (1986). The AMI is given by

(2) Where pi is the probability of finding a time series value in the i-th interval, and pij() is the joint probability that an observation falls into the i-th interval and the observation time  later falls into the j-th interval. To determine the embedding dimension m we use the false nearest neighbour method, Kennel et. al (1992). The method relies on the assumption that an attractor of a deterministic system folds and unfolds smoothly with no sudden irregularities in its structure. Two points that are close in the reconstructed embedding space have to stay sufficiently close also during forward iteration. If this criterion is met, then under some sufficiently short forward iteration, originally proposed to equal the embedding delay, the distance between two points yi and yt of the reconstructed attractor, which are initially only a small distance apart, cannot grow further then a given constant.

(3) If Ri is larger than a given threshold then yi is marked as having a false nearest neighbour. Equation (3) has to be applied for the whole time series and for various values of m until the fraction of points for which Ri is bigger than the threshold is negligible. Lyapunov exponents are a quantitative measure for distinguishing among the various types of orbits based upon their sensitive dependence on the initial conditions, and are used to determine the stability of any steady-state behaviour, including chaotic solutions. The reason why chaotic systems show aperiodic dynamics is that phase space trajectories that have nearly identical initial states will separate from each other at an exponentially increasing rate captured by the so-called Lyapunov exponent (Linsay, 1981;  Fraser and Swinney, 1986). This is defined as follows. Consider two (usually the nearest) neighbouring points in phase space at time 0 and at time t , distances of the points in the i-th direction being ||δxi (0)|| and ||δxi (t)||, respectively. The Lyapunov exponent is then defined by the average growth rate λi of the initial distance.

(5) The first step of the algorithm consists of finding the nearest neighbour of the initial point yk. Let L(tk) denote the Euclidean distance between them. Next, we have to iterate both points forward for a fixed evolution time, which should be of the same order of magnitude as the embedding delay τ, and denote the final distance between the evolved points as L'(tk-1). Recurrence plots have been first used to unveil hidden patterns and non-stationarity in dynamical systems, Eckman et. Al (1987). Recurrent plots are very appealing for finding hidden correlations on complex dynamical systems also because they do not necessarily rely on stationary data. A recurrence plot is a two dimensional (i,j) representation of the dynamical system where each point represents the distance (gray levels) between two points (yi and yj) in the reconstructed attractor. The interpretation of recurrence plots is fairly simple: if the signal being analysed has a random structure the plot will present itself with a uniform distribution with no evident pattern showing. If the underlying signal gives rise to a well defined set of patterns then it should have its origins in a deterministic signal. The downside of this approach is that it can only provide a qualitative assessment of the underlying signal. Homogenous recurrent plots demonstrate the stationarity nature of the underlying signal and texture of the plot gives an indication if the system is deterministic or otherwise stochastic. 4. Experimental Work Taking into consideration previous research (e.g. Jiang et al., 1987; Kunpeng et al., 2009) vibration has been chosen in this work as a secondary source of information because of the correlation between machine tool vibration and tool wear that have been demonstrated successfully in the laboratory. Based on the above considerations experimental background work was conducted on the turning process to collect tool wear data. In this work a set of tool wear cutting data was acquired by machining a block of mild steel under realistic production conditions that consisted of a cutting speed of 350 m/min, a feed rate of 0.25 rev/min and a depth of cut of 1 mm, with a coated cemented carbide tip. The set of sensors used were: an accelerometer for measuring vertical vibration, a microphone for recording sound emission, a strain gauged tool holder for force measurement and a meter for the spindle current of the CNC machine. The turning operation was carried out on an MT 50 CNC Slant Bed Turning Centre. The analogue signals were sampled at 20 kHz with tool wear and sensor data being acquired at intervals of 2 min, taking into account an expected tool life, for each insert, with a typical value of 15 min. Sample data were recorded for 6 inserts. The length of each sample was 4096 points, and these were acquired approximately in the middle of the bar. Each 4096 point record was processed to generate the features used in the classification stage. A total of 12 features were extracted from the sound and vibration data: absolute deviation, average, kurtosis, skewness and the energy in the frequency bands (2.2-2.4 and 4.4-4.6 kHz) obtained from the spectra. Two additional features were presented from the means of the feed and tangential forces. Results have shown that tool wear classification is difficult in the presence of such noisy data and it is therefore required that classification is made by a method that can resolve the complex interrelation between features to produce a robust wear classification. Also the use of multiple sensors should prove to be of great value towards tool wear evaluation since the noisy character of each sensor alone would lead to certain failure of the monitoring system, Silva et al. (2006). A typical graph of the evolution of flank wear with cutting time is shown in Figure 1 and consists of three stages. The first stage is a short period of rapid wear, the wear then progresses at a slower rate over a period, in which most of the useful tool life lies. The last stage is a rapid period of accelerated wear and it is usually recommended that the tool be replaced before this stage. The data presented in Figure 33 was obtained from a cutting speed of 350 m/min, a feed rate of 0.25 mm/rev, and a 1 mm depth of cut. For these cutting conditions the first stage can be observed to end at approximately 3.5 min after the start of cutting, which corresponds to VBB = 0.09 mm, the second stage lies in the interval between 3.5 min and 14.7 min (0.09 < VBB < 0.3 mm), and the third stage starts after 14.8 min of cutting time. The beginning of the third stage coincides with a value of flank wear of 0.3 mm which is the tool life criterion established in the ISO3685 (1993) standard. 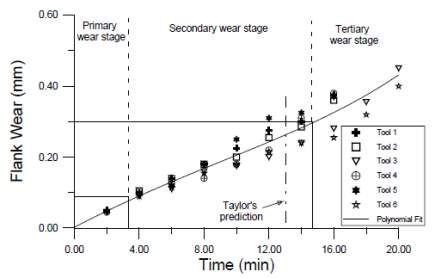 Figure 1 – Flank wear evolution with time: 350 m/min, 0.25 mm/rev and 1 mm depth of cut As can be observed for the feed force, e.g. Figure 1, both tangential and feed forces show an increase with tool wear which is consistent between tools. These tests were carried out for 6 insert tips giving a total of 52 different wear levels. The 6 inserts gave a standard deviation of 2.1 min (14% of average tool life) justifying once again the use of a monitoring system. 5. Results and Discussion 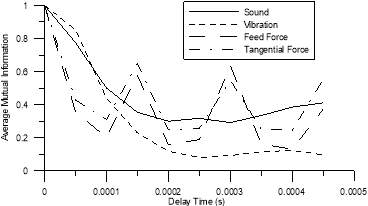 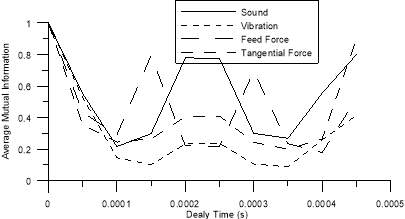 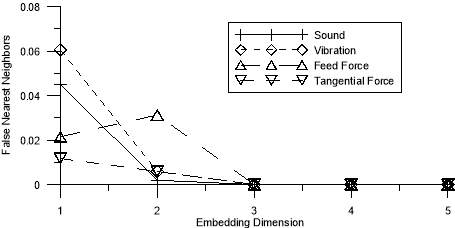