Stability of proteins with a focus on physical and chemical degradation

Since discovery of human insulin in 1982, protein therapeutics field is growing remarkably and taking over small molecules. Protein therapeutics have wide range of application from oncologic to dermatological, nephrological, ophthalmological, immunological, and infectious diseases. Global protein therapeutics market likely to emerge around $315.50 billion by 2025 [1]. The most important advantage of the proteins over the small molecule drug are less immunogenicity and toxicity. Although, problems like physiochemical instability, poor pharmacokinetic properties, makes difficult to formulate protein-based drugs over small molecule drugs. There are handful instabilities related to proteins that can be either physical or chemical (Table:1) [2]. Over last few years, a handful of approaches like changing pH, ionic strength, and adding stabilizer, surface active agents have been employed to make a stable protein formulation [3]. In this review, we will discuss commonly associated physical and chemical degradation pathways, which leads to protein degradation.

Biologically active state of most proteins is defined by a tightly folded conformational arrangement.  When in the native conformation, polypeptide chains, consisted of amino acid chains of a protein are folded into an extraordinary 3-D structure. In addition to peptide bonds, water mediated hydrophobic interactions, several hydrogen bonds, van der Waals attractions, sometimes peptide bonds comes into play to stabilize the 3-D structure. when two cysteine residues lie close to each other Protein unfolding or denaturation is process involving conformational changes in protein structure that further leads to loss of activity although chemical compositions remains the same. Even a minute change at a certain position can lead to a huge change in overall structure and functions. For example, pollen major allergen Bet v 1 with point mutations with a modified surface topography though with an α-carbon-backbone folding pattern, have been shown to retain the capacity to induce allergen-specific immune responses, but with a decrease in anaphylactic potential and it happens because histamine release from human basophils was greatly decreased [4]. Furthermore there are diseases like cystic fibrosis, ALS, Alzheimer’s disease, Prion disease are associated with misfolding of proteins in vivo [5].Thermodynamic stability of the proteins depends on the free energy difference between the folded and the unfolded (ΔG = Gunfold – Gfold) conformations [5] . Several processes can denature a protein.

The most common reason behind protein denaturation is high temperature. Proteins have threshold temperature beyond that they readily unfold which is most of the times irreversible. At elevated temperature, unfolded protein structure becomes more flexible and forms aggregate by non-covalent or disulfide bonds or both [6]. Yohannes and co-workers showed in a proof of concept study, bovine serum albumin (BSA) have stable conformation and size around 7nm when heated upto 60 C. Although when heated above 63 C, BSA formed aggregates and the size was found to be 15nm to 149nm [7].  Differential scanning calorimetry (DSC) is most commonly used technique to measure ‘‘melting temperature’’(Tm) which is used to determine effect of commonly used excipients on stability of protein based formulations. Melting temperature by definition is the temperature at which one half of the DNA duplex present will be broken to become single stranded. Formulations with higher melting are thought to have good stability under real-life storage conditions [2]. However, effects of elevated temperature on proteins are well studied, but procedure of cold denaturation is not well studied except a few [8]. The reason behind this is most proteins undergo cold denaturation beyond the freezing point of water and the process is reversible and does not arise any practical problems [9, 10].

Most of the important biological processes in our body like protein-protein, protein-ligand, protein-membrane and peptide-membrane interactions are pH dependent [11]. Change in pH can affect proteins stability and activity. For example, alpha-Sarcin, an exquisitely specific ribonuclease which inactivates large rRNA of the eukaryotic ribosome via binding to it and breaking the single phosphodiester bond in 28S RNA [12]. Mentioned protein is only stable near pH 5.5, where it also has most activity. The positive charge on a long alpha-hairpin and surface loops of alpha-Sarcin which is responsible for membranous translocation and in ribosome binding. These positive charges are found to be decreasing stability of alpha-Sarcin below pH 5 [13]. This incidence shows proteins are only active over narrow range. The pH dependent activity largely depends on the protonation states of the acidic and basic residues. Optimum pH where the protein’s stability is the most can be find by the pH value at which the protein has the minimum free energy of folding or where the difference between the net charges (ϪQ) between the folded and unfolded conformations are zero[14]. The pH and their importance on the stability of the proteins and their monomers can be calculated from given formula

where ϪQ(pH)=Qf(pH)=Qu(pH) is the difference between molecule net charges in folded state, Qf(pH), and unfolded state, Qu(pH), R is the universal gas constant, and T is the temperature (in K) [16]. The charge on protein depends on pH of the solution Figure 1. 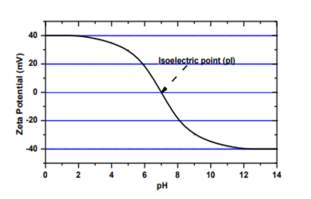 At the isoelectric point, the net charge becomes zero which can further lead to aggregation. The net charge also depends pKs of ionizable groups present on the protein at any particular pH[17].

Aggregation is one of the most common ways that lead to instability of protein based formulations and makes it therapeutically inactive [3]. Existence of insoluble protein aggregates in pharmaceutical products makes it unacceptable for FDA approval. The secondary, tertiary, and quaternary structure of a protein of the protein in their unfolded or denatured have tendency of forming aggregates, which can be reversible or non-reversible. Unfolded human lysosome converts their unorganized structure into a cross-β structure, which further leads to formation amyloid fibrils and Plaques. These deposits can be formed in in the liver, brain, spleen and in many other organs depending on the disease [18]. Amyloid fibrillogenesis, a form of protein aggregation found to be behind neurodegeneration in Parkinson’s and Alzheimer’s [19]. This process can be initiated by a no of factors for instance temperature, ionic strength, change in pH, deamidation, disulphide bond shifting, and oxidation. One of the common feature of the protein aggregates a high level of Non-native intermolecular β-sheet structure. Aggregates of pharmaceutical formulations can cause severe immunogenicity and result into inactive product [3]. Philo et al lists 5 most commonly mechanism for protein aggregation 1) reversible association of the native monomer, 2) aggregation of conformationally-altered monomer, 3) aggregation of chemically-modified product, 4) nucleation-controlled aggregation, 5)  surface induced aggregation [20]. Although it is not essential but mechanistic, understanding of aggregation of protein-based formulation will certainly help to develop suitable formulation or manufacturing method that can enhance stability.­­

Oxidation is another crucial mechanism, which leads to protein instability. Rate of the oxidation reaction depends on the oxidizable groups present on the protein. A no of amino acids on protein chain such as cysteine, methionine, tryptophan, tyrosine, phenylalanine and histidine are all prone to oxidation [21]. Thiol groups on methionine and cysteine are most susceptible towards oxidation. Although oxidation of the thiol groups on methionine not really considered as significant [22]. Oxidation on these sites on protein can encouraged by light exposure, peroxides, dissolved oxygen, metal ions, light and free radicals s [23]. Human Realxin, an enzyme crucial in establishing pregnancy undergoes metal catalyzed oxidation on histidine and methionine residue and further results in aggregation and precipitation. Protein oxidation can occur either directly attacked by reactive oxygen species on these oxidation susceptible sites or indirectly through peroxidation of lipids that again denature and attack proteins [24]. Methionine and cysteine residues on the Fc region of immunoglobulin G (IgG) is susceptible to oxidation, which impairs their binding to the macrophages [25].

Deamidation is one of the most common ways of degradation that occurs when amide group is lost in proteins and biopharmaceuticals. Deamination mostly affects side chain residues of asparagine but sometimes it can also target glutamine residues too [26]. In a deamidation reaction, with an asparagine residue the -nitrogen C-terminal to the asparagine attacks the side-chain carboxylate group, which results in formation of a succinimide intermediate and the release of ammonia. Then cyclic succinimide intermediate gets hydrolyzed to form mixture of isoaspartate and aspartate [23].These intermediates also enhances the negative charges on the protein. An investigation on charged isoforms monoclonal antibodies revealed presence of different levels of isoaspartate which was formed through deamidation [27]. Deamidation was also found to be present in the both heavy and light chains of monoclonal antibodies [28]. Deamidation of asparagine residue in proteins and peptides present in an aqueous solution continues a much higher rate than hydrolysis of a peptide bond [29]. Rate of deamidation proteins are pH-dependent. It has been found asparagine deamidation is highest in neutral or alkaline conditions in range of pH 5to 12 and most stable in pH 2-5 [29, 30]. Deamidation can take place via enzymatic or non-enzymatic pathways, although non-enzymatic deamidation is the most frequently observed degradations in proteins and biological formulations. Figure 2 depicts the mechanism followed for non-enzymatic deamidation [31]. 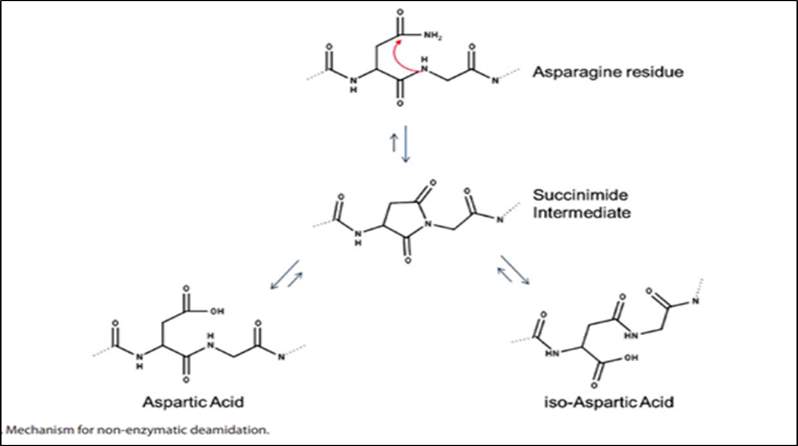 Hydrolysis of the susceptible peptide bonds present in amino acids in the protein primary structure occurs under acidic and basic conditions thus disrupting the protein structure. Mostly peptide bonds are stable with exception of peptide bonds present -X- Asparagine -Y- residue in which Asparagine-Y bond is 100 time more labile to hydrolysis than any other peptide bonds [9, 32]. Most of the cases hydrolysis is a continuation degradation process followed by the deamidation Asparagine residues. For instance, Insulin forms first forms iso- Asparagine and aspartic acid based on the pH of the storage solution. These derivatives then again go through hydrolysis independent of the insulin concentration [33]. Hydrolysis of the peptide backbones has been seen in monoclonal antibodies even in the case when asparagine amino acids residues are not present. This is noticed on the hinge region of the IgG1 monoclonal antibodies and governed by the flexibility of the peptide chain [34, 35]. Similar type of hydrolysis also found in case of Asparagine-Proline bond which cleaves under influence of ammonia [36]

Effect of pH on the Absorption Process

The characterization of the prepared nanocomposite was required to confirm the formation of desired nanomaterials. Different techniques such as FT-IR spectroscopy, TGA/DTA, X-ray diffraction and FE-S...

Up till now, industrial processes relied on conventional microporous inorganic and organic materials like zeolites [1] and carbonaceous materials [2] as catalyst, however, some limitations are presen...