Share this: Facebook Twitter Reddit LinkedIn WhatsApp
Neural alterations of the Visuospatial Working Memory Network in Children Born Preterm: A Systematic Review   Abstract Today premature birth has been identified as a serious clinical and public health issue that modern medical knowledge has failed to tackle.  Quite the contrary, rates of preterm birth are rising globally.  It is well-established that children born preterm exhibit deficits in most cognitive domains, most prominently working memory with a specific vulnerability in visuospatial processing.  Although there is substantial evidence on the neural basis of visuospatial working memory (VSWM) in typically developing individuals, little is still understood with respect to this matter in at-risk populations, such as those born preterm, during brain development. Yet working memory skills have been found to underlie higher-order cognitive abilities, such as executive function, while playing a mediating role in later academic attainment and social competence.  The goal of this review was to provide an overview of the existing literature regarding the neural correlates of the visuospatial working memory system of preterm children, from infancy to adolescence, over the last decade.  Both structural and functional changes are reported in most studies, while the recruitment of compensatory mechanisms results in a catch-up effect at a behavioural level. With this information, early targeted interventions can be designed in order to optimize outcome in this population.               Introduction Preterm children (PT) are those of a gestational age of less than 37 weeks. A recent publication of the World Health Organization reported that approximately 15 million preterm infants are born every year around the world (World Health Organization, 2016).  Over the last few years, there has been a dramatic increase in the rates of survival of preterm children, yet premature birth still is the primary cause of infant mortality and morbidity in developed countries (Goldenberg, Culhane, Iams & Romero, 2008).  Even though, only a small percentage of preterm children present with serious disabilities, such as cerebral palsy and sensory impairment, there is a larger group suffering from subtler deficits in domains including executive function, behavioural and emotional problems and learning disabilities (for review see Anderson, 2014).  These difficulties can largely affect the child’s academic attainment and general well-being and may persist into adulthood (Taylor, Minich, Bangert, Filipek & Hack, 2004).  Therefore, an in-depth understanding of the long-term sequelae following premature birth is needed in order for this high-priority public health issue to be addressed and effectively managed.   Effects of prematurity on early brain development   Premature birth occurs in a period critical for the normal maturation of the central nervous system.  In fact, preterm birth is known to have a “double jeopardy” effect on early brain development, since it not only interrupts the typical process of brain development in utero, but also exposes the infant to pathological conditions, such as periventricular leukomalacia, which would not normally be encountered at this gestational age (Schonkoff, Phillips & National Research Council, 2000).  Such conditions cause early brain lesions usually affecting subcortical areas, such as the thalamus, hippocampus, caudate nucleus, the frontal cortex and the corpus callosum, while disrupting myelination processes, leading to both white and grey matter damage (Luciana, 2003).  Recent advances in neuroimaging have allowed researchers to study altered brain structures and function of the preterm brain in more detail.  A meta-analysis by de Kieviet, Zoetebier, Van Elburg, Vermeulen and Oosterlaan (2012) suggests that the preterm brain has significantly smaller total, white and grey matter volumes. These structural differences have been linked to poorer IQ, working memory, language and executive function by other researchers (Allin et al., 2004; Taylor et al., 2011).  However, compensatory factors, such as brain plasticity and social factors play an important role in determining final outcome (Sansavini et al., 2007). Working Memory and Preterm Birth A large body of evidence shows that preterm-born children are at higher risk for developing mild cognitive deficits related to memory and executive functions (de Haan, Bauer, Georgieff & Nelson, 2000; Soria-Pastor et al., 2008), academic underachievement and behavioural problems (Aarnoudse-Moens, Weisglas-Kuperus, van Goudoever & Oosterlaan, 2009; Anderson, Doyle & Victorian Infant Collaborative Study Group, 2003).  Working memory (WM), in particular, has been identified as a strong predictor of academic achievement in children born preterm (Gathercole, Alloway, Willis & Adams, 2006; Mulder, Pitchford & Marlow, 2010).  In the classic definition by Baddeley and Hitch (1974), working memory is defined as the ability to mentally store and process information over a brief period of time. Up to date, the most influential theoretical account of WM is the three-component model described by the same authors(Fig 1).  The neuroanatomical dissociation between phonological and visuospatial working memory is supported by multiple findings of imaging studies (Gruber & von Cramon, 2003; Haxby, Petit, Ungerleider & Courtney, 2000).   Additionally, Hamilton, Coates and Heffernan (2003) proposed a dual-stream subserving the visual and spatial components of the visuospatial sketchpad, the former being in place earlier than the latter.           Figure 1: Baddeley’s three-component model of working memory . 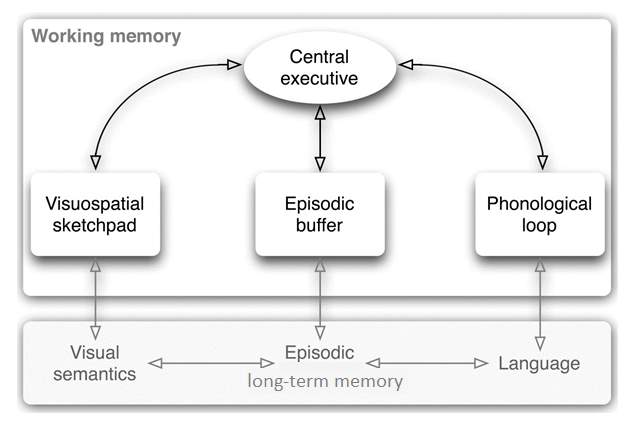 Nevertheless, deficits in VSWM are a convergent finding in the preterm literature and might explain the problems that preterm children encounter in terms of behaviour and learning (Fitzpatrick, Carter & Quigley, 2016; Luciana, Lindeke, Georgieff, Mills, & Nelson, 1999).  In fact, Gathercole and Alloway (2008) reported that typically developing children with working memory deficits also face problems in learning domains, such as reading, spelling and mathematics. Lastly, WM deficits have been repeatedly associated with a number of developmental disorders, including autism and attention deficit disorder (Barendse et al., 2013; Martinussen, Hayden, Hogg-Johnson & Tannock, 2005).  However, the nature of these impairments is still poorly understood, which has previously been attributed to varied methodologies and definitions employed by different studies (Lee, 2015).  It is thus easily understood why knowing the neural substrate of VSWM in preterm children comes with considerable advantages.  Not only will it inform research by contributing to the increasing understanding of the relationship between neonatal brain lesions and later neurocognitive outcome, but also guide the design and delivery of early and targeted intervention plans by clinicians in order to use children’s strengths to facilitate potential areas of weakness and optimize outcomes.  Thus, aim of this systematic review was to examine the existing literature and shed light on the neural correlates of VSWM impairment observed in several studies at a behavioural level.  The reason why this paper focused specifically on visuospatial and not verbal working memory is the selective nature of these deficits with verbal WM usually being spared (Rose, Feldman & Jankowski, 2011). METHOD Identification and study selection   A literature search was conducted in two major databases for Psychology Articles, PubMed and PsychINFO, using the search terms “preterm”, “prematur*”,  “low birth weight”  and “working memory” or “executive function”.  The results of these searches were 65 articles from PubMed and 73 from PsychINFO.  Further articles were handsearched in these databases.  After eliminating duplicates, 45 articles remained and were further studied according to the following inclusion and exclusion criteria(Fig 2): Figure 2: flow-chart of the included and excluded studies. 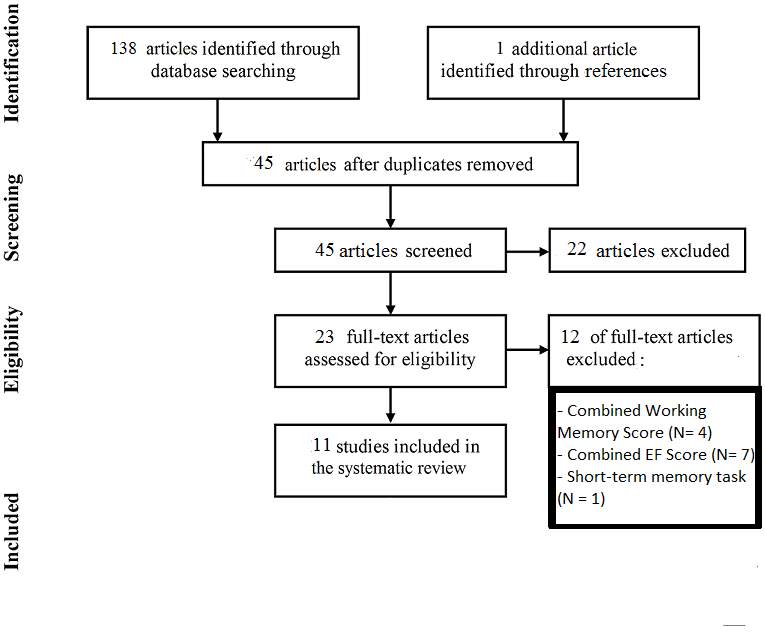