Originally, Dollo’s Law was the idea that organisms will not resume a state from earlier in evolutionary time, though this was too broad (Goldberg and Igić, 2008) and instead the concept scientists focus on is that once complex characters have been lost, they cannot be re-evolved (Collin and Miglietta, 2008). However there are a growing number of cases that contradict Dollo’s law. Some species of Gastropod were found to have re-evolved a coiled shell after millions of years (Collin and Cipriani, 2003). In the frog genus Gastrotheca, more than one instance was discovered of the regain of mandibular teeth some millions of years after loss (Wiens, 2011).

Viviparity is the trait of giving birth to live young (Tinkle and Gibbons, 1977) and I am carrying out an analysis on Lizards, and focusing on the loss or gain of viviparity. My hypothesis is that, in accordance with Dollo’s Law, where viviparity is lost in a Lizard species, it will not re-evolve in any of its descendents.  There will be no viviparous species of Lizards whose ancestors lost the characteristic.

The method for analysis was Ancestral Character Estimation (ACE) with Maximum likelihood (ML). This required data from the extant lizard species and a tree of the phylogenetic relationships between the lizards (Schluter et al., 1997). The data had 86 objects, which were the species of Lizard, and 3 variables; the species name, the discreet characteristic of oviparity or viviparity, and the code for parity, with viviparity having a value of 1 and oviparity of 0. The method reconstructs ancestral characteristic states working from extant species data back through evolutionary time to the root(Schluter et al., 1997)(Cunningham, Omland and Oakley, 1998). Using Maximum Likelihood calculates the probability of all possible character states for each node in the phylogenetic tree(Cunningham, Omland and Oakley, 1998). An assumption must be made that the tree is completely accurate(Schluter et al., 1997). ACE in ML consists of three main components. Firstly, that the probability of trait change at any point in the tree depends solely on the current character state, secondly that changes along each branch of the tree are independent of other branches and thirdly rates of change are constant throughout(Schluter et al., 1997)(Cunningham, Omland and Oakley, 1998). Another distinction of the Maximum Likelihood method is that it considers branch length, and therefore evolutionary time, when calculating probabilities(Cunningham, Omland and Oakley, 1998).

I used the software R and created a script (Appendix) to run the analysis. I used the package Analysis of Phylogenetics and Evolution (APE) as this included functions for manipulating phylogenetic trees and running ancestral state reconstruction analyses(Bolker et al., 2014). The APE package is tailored to my needs as it focuses on producing a statistical output based on the input of a phylogenetic tree. APE can be called to R with simple command (Appendix  line 14)(Paradis, Claude and Strimmer, 2004). 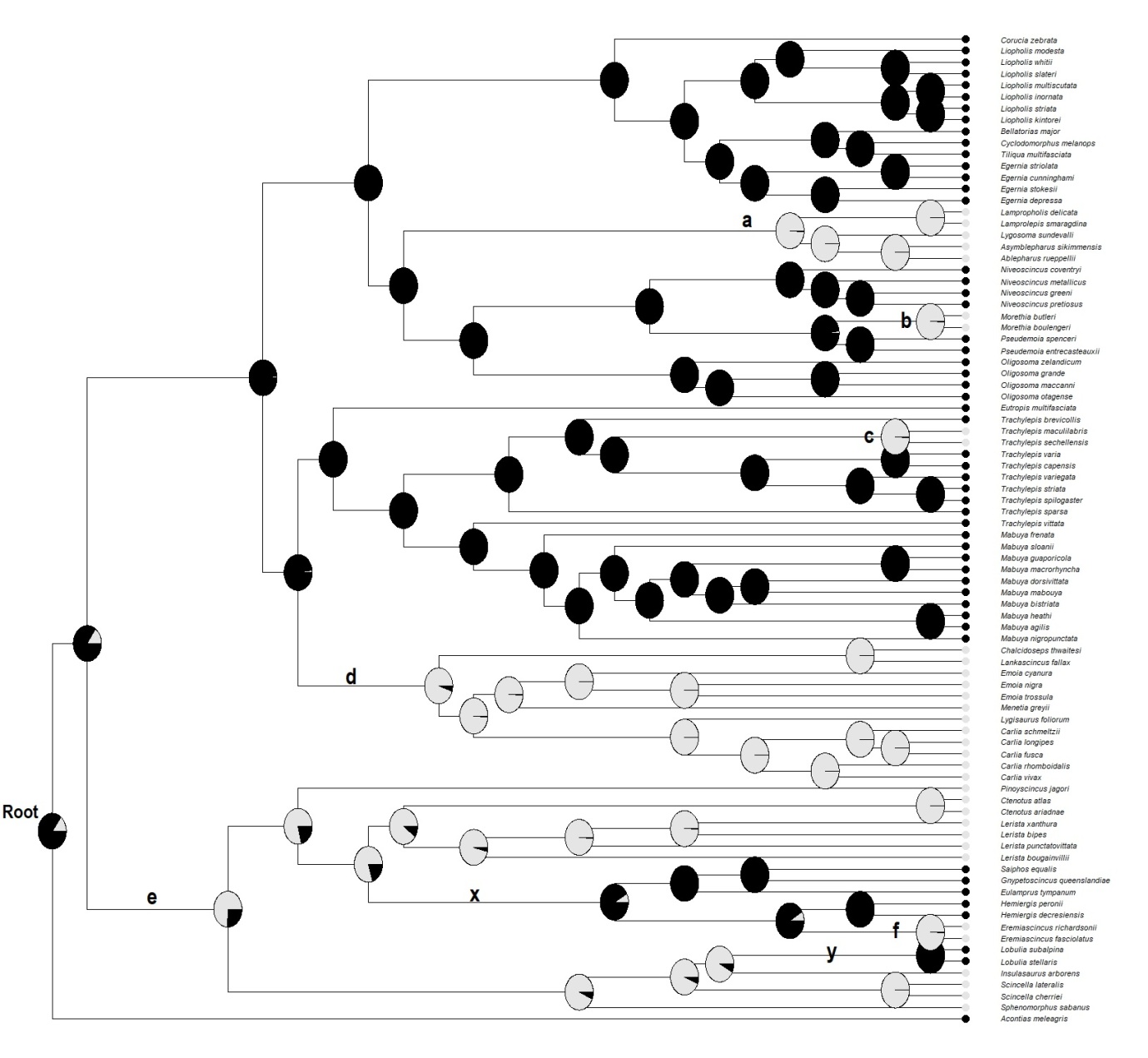 Figure 1. Ancestral state reconstruction of Parity in a sample of 86 Lizards. Viviparity is represented as black and Oviparity is represented as grey. The internal nodes are pie charts depicting the proportion of the probability that a node is viviparous or oviparous as estimated by an ancestral character estimate (ACE) in maximum likelihood with transition rates free to vary, using the APE package in R.

The ACE analysis has shown that the last common ancestor for this group of lizards most likely had a viviparous character state, therefore oviparity evolved from viviparity and any reversion of a species that had oviparous ancestors back to a state of viviparity would be a violation of Dollo’s law. The rates of transition are higher for viviparity to oviparity than vice versa, as shown by the fact there are 6 losses of viviparity across the tree and 2 gains in lineages that have oviparous ancestors.

The maximum likelihood estimates have varying levels of uncertainty, shown by the pie charts(Schluter et al., 1997). Transitions to oviparity at node labels a, b, c, d and f (Figure 1) are strongly supported, but the transition at the node label e (Figure 1) is not as strongly supported, evidenced by the larger proportion of the pie chart that represents the viviparous trait. Reversions to viviparity occur at node labels x and y (Figure 1) and by looking at the proportion of probability, node y has a higher level of confidence than node x.

In articles reporting the outcomes of similar ACE reconstruction it has been suggested that a reason for uncertainty with the ML method could be that the rate of a character evolving compared to the branch length would make the evolution of that character within the given evolutionary time unlikely(Cunningham, Omland and Oakley, 1998).

This analysis does not support my hypothesis as there are two clear cases with a strong likely hood that viviparity re-evolved in a lineage where it has previously been lost.

However in a study involving the re-evolution of coiled shells in snails, a suggestion was made that the re-emergence of a characteristic could actually be the evolution of a new version of the characteristic rather than the recovery of a lost one(Collin and Cipriani, 2003). Marshall et al concluded that genes could be reactivated after a short period in evolutionary time of disuse, but genes that undergo long periods of silencing only survive if they have another role that means they continue to be used (Marshall, Raff and Raff, 1994).

Overestimation of Paraproteins in Serum by Immunoturbidimetric Method

Investigation of the Overestimation of Paraproteins in Serum by Immunoturbidimetric Method: Time for a change of protocol at Sligo University Hospital? Abstract Background: Although protein electroph...

Fluorescent In-Situ Hybridisation: Current Applications and Recent Advances Introduction The applications of fluorescent in-situ hybridisation (FISH) as a cytological tool has pervaded across many sci...