The domain of drug delivery has imparted a novel pharmaceutical viewpoint towards drug formulation and subsequent patient therapy. In the last couple of years, the technology of formulation and development has undertaken noteworthy strides in the progressive implementation of diverse types of newer drug delivery systems (DDS). Despite enormous inventions in designing novel DDS through alternative routes of administration, per oral drug administration has unambiguously been the most convenient and hence demanded route by the patients and manufacturers [1]. From the patient standpoints, oral route has got its wide acceptability due to many reasons like this is the “natural” route, less invasive than parenteral, intra muscular or any other  routes of administration, easy administration for paediatric patients, low cost therapy etc [2]. In addition, the easy, flexible and low-priced manufacturing associated with oral drug products coupled with straightforward availability of needed raw materials, equipment, and technology, and a simple regulatory approval account for their popularity amongst the manufacturers as well [3]. Today, more than one-half of the DDS available commercially are the oral ones. To attain its ultimate therapeutic objective(s), a drug delivery product must encounter various phases in the in vitro and in vivo milieu. Figure 1 illustrates the logical sequence of the steps that an oral drug DDS undergoes following oral administration. 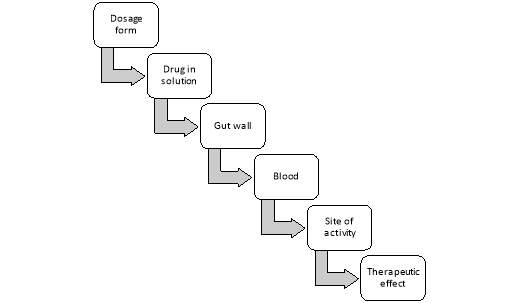 The therapeutic efficiency of a drug depends upon the ability of the dosage form to deliver the medicament to its site of action at a rate and quantity enough to elicit the desired pharmacodynamic response. Accordingly, the term, bioavailability” construes measurement of both true rate and total amount of drug that reaches the general circulation from an administered dosage form by absorption. The concept of bioavailability, known previously as physiological availability, was first proposed by a group of researchers in the year of 1945 [4]. Ideally, it reflects the concentration of active moiety at the site of action, i.e., receptor site. The United States Food and Drug Administration (1989) defined bioavailability as “the rate and extent to which the active drug ingredient or therapeutic moiety is absorbed from a drug product and becomes available at the site of drug action” [5]. However, it is quite impractical to determine drug concentration at the receptor site; hence, the International Consensus Statement is more widely accepted and used in industrial practice. It states bioavailability as “the rate at which and the extent to which a drug reaches systemic circulation” [6]Verily, all the federal definitions encompass both the rate and extent of absorption from the gastrointestinal tract. The influence of route of administration on drug bioavailability is generally in the order of: parenteral > oral > rectal > topical, barring with only few exceptions. Within the parenteral route, intravenous injection of drug results in 100% bioavailability as the absorption process is bypassed [7]. Nevertheless, most drugs are administered orally, for reasons of convenience of administration, stability and patient compliance. For the similar reasons, tablets, capsules and oral liquids constitute the most popular drug formulations all administered perorally. In recent years, several promising in vitro models became available for the study of the absorption potential of new compounds. The dose available to the patient in case of oral administration is called as the bioavailable dose, which is often less than the administered dose. The amount of drug that reaches the systemic circulation (i.e., extent of absorption) is called as the systemic availability of that particular drug. The term, bioavailable fraction, F, refers to the fraction of administered dose that enters the systemic circulation [8]. The rate at which a drug reaches the systemic circulation is relatively more important consideration for the drugs used to treat acute condition, like pain or insomnia, which can be ameliorated even with a single dose. A drug that is absorbed slowly may not concentrate at the site of action to show the desired effect or intensity of effect, even if the entire dose is absorbed. Figure 2 illustrates the case of three oral drug formulations having same extent of absorption (AUC) but grossly differing in their rates of absorption. The figure clearly explains that if the rate of absorption is very slow (case B), the levels may not at all be pharmacodynamically productive, as minimum effective level is not reached. Further, extremely fast absorption (case C) also at times is unwelcome, as the levels are likely to cross minimum toxic level and exhibit signs of drug overdosage. Hence, a plasma concentration time profile should behave in an ideal manner, with moderate fast absorption rate (case A). 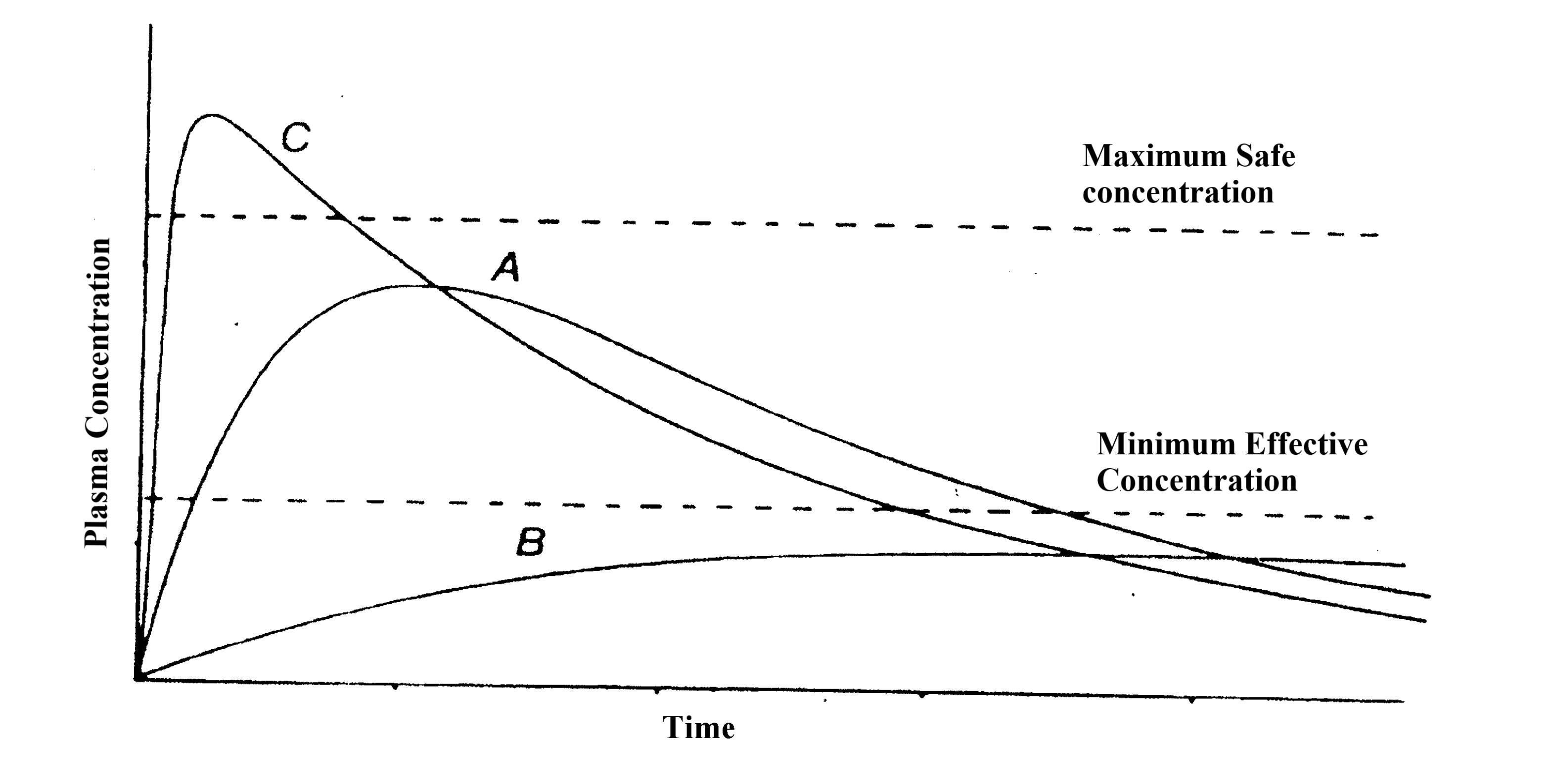 Herein in case of A, the levels tend to remain in the therapeutic window for a substantial duration, thus attaining optimal therapeutic effects with minimal toxicity[9].

Oral bioavailability of a drug is controlled by three principal factors: 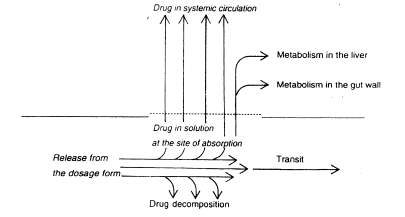 (a) Physiochemical Characteristics of Drug

(b) Formulation Factors and Physiochemical Properties of Formulations

In order to be absorbed into systemic circulation, the drug(s) must be hydrophilic enough to be solubilised (i.e., soluble), yet lipophilic enough to get across the g.i. membrane (i.e., permeable)[12].  Figure 4 represents the of BCS of drugs. 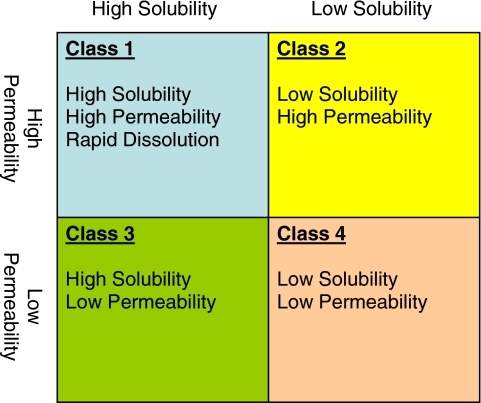 According to BCS [13], a drug on the basis of these solubility and permeability characteristics, can be classified in one of the four possible categories, as indicated in Figure 4.

The characteristics of four classes of drugs as per the BCS has been well elaborated by the researchers[14]. According to them, a Class I drug should be more than 90% absorbed. Class IV compounds have neither sufficient solubility nor permeability for absorption to be complete, hence are problematic for product development according to US FDA Guidelines, 2000. Class II drugs tend to exhibit dissolution-limited bioavailability i.e., their absorption in vivo depends upon their dissolution in vivo. Hence, the in vivo physiological performance correlates well with their in vitro dissolution, eventually resulting in good in vitro-in vivo correlations (IVIVC) [15]. Another case where good IVIVC is often obtained is when a Class I drug is formulated as an extended release product. In this case too, the release profile controls the rate of absorption. In principle, the in vitro dissolution rate tests can be used to predict and simulate the in vivo performance of such dosage forms [10]. Table 1 includes various drug examples of BCS.

The BCS tends to combine the physicochemical properties of drug compounds with that of the physiological factors to predict the fraction of dose absorbed during the g.i. transit [13]. The permeability of a given drug determines the upper limit of its extent of absorption. The interaction of the physiological environment (e.g., intestinal pH, transit time, g.i. motility, luminal metabolism, endogenous substances such as bile salts, exogenous substances such as nutrients, etc.) with physicochemical characteristics of the drug (e.g., pKa, solubility in the gut lumen, dissolution rate, aqueous diffusivity, partition coefficient, chemical and enzymatic stability in the intestine, etc.) can have profound influence on the availability of the drug at the absorption site. For poorly soluble drugs, the transit time at the absorption site is an important factor for bioavailability[8]. Also, drug release and absorption must occur within the available transit time.

If the volume of water required to dissolve the dose is more than 250 mL, then the absorption is likely to be solubility limited. Dissolution rate is implied to be as the amount of solid substance that goes into solution per unit time under standard conditions of temperature, pH and solvent composition and constant solid surface area. The dynamic process of dissolution is the rate-determining step for hydrophobic and poorly aqueous soluble drugs like griseofulvin and spironolactone [7]. Hence, the absorption of such drugs is often said to be dissolution rate limited. The earliest mathematical relationship to explain the rate of dissolution, dC/ dt when the process is diffusion controlled and involves no chemical reaction, was proposed by Noyes and Whitney (1897), as in Eqn. 1.

where, K is the first-order dissolution rate constant, Cs is the concentration of drug in

the stagnant water layer (also called as the equilibrium solubility, saturation solubility, or maximum solubility) and Cb is the concentration of drug in the bulk of the solution as a function of time, t. Brunner in 1904 modified the Noyes Whitney equation by incorporating Fick’s first law of diffusion and proposed another relationship described by Eqn. 2.

1.2          Different methods of release kinetics study of the drug from the particle matrix

Zero order release kinetics refers to the process of constant drug release from a drug delivery device such as oral osmotic tablet, transdermal system, matrix tablet with low soluble drugs and other delivery system. Constant release is defined in this context as the same amount of drug release per unit time. In its simplest form, zero order drug release can be represented as in equation  3:

K1 is the first order rate constant, expressed in time-1 or per hour. Hence it can be defined as that first order process is the one whose rate is directly proportional to the concentration of drug undergoing reaction i.e., greater the concentration faster the reaction. Hence, it follows linear kinetics. After integrating and rearranging the equation becomes as shown in equation 5.

C0 is the initial concentration of the drug, C0 is the percent of drug remaining at time t. The correlation coefficient of the above equation will give the information whether the drug release follows first order kinetics or not.

The first example of a mathematical model aimed to describe drug release from a matrix system was proposed by Huguchi in 1963 [18].Initially conceived for planar systems, it was then extended to different geometrics and porous systems[19]. This model is based on the hypotheses that (i) initial drug concentration in the matrix is much higher than drug solubility; (ii) drug diffusion takes place only in one dimension (edge effect must be negligible); (iii) drug particles are much smaller than system thickness; (iv) matrix swelling and dissolution are negligible; (v) drug diffusivity is constant; and (vi) perfect sink conditions are always attained in the release environment. Accordingly, model expression is given by the equation 6

where, Ct is the percentage of cumulative drug release at time t, kH is the Higuchi dissolution constant.

Korsmeyer et al. (1983) derived a simple relationship which described drug release from a polymeric system. To find out the mechanism of drug release, drug release data were fitted in Korsmeyer n Peppas model[20].

where Ct / C∞ is a fraction of drug released at time t, k is the release rate constant and n are the release exponent. The n value is used to characterize different drug release pattern from the dosage form matrix as described in Table 2.

The use of nanotechnology in medicine and more specifically drug delivery is set to spread rapidly. Recent years have witnessed unprecedented growth of research and applications in the area of micro and nanotechnology. There is increasing optimism that these novel technologies, as applied to medicine, will bring significant advances in the diagnosis and treatment of disease [21]. Anticipated applications in medicine include drug delivery, both in vitro and in vivo diagnostics, nutraceuticals and production of improved biocompatible materials. Novel drug delivery system includes technologies for carrying therapeutic moiety in body to accomplish maximum therapeutic outcome. Example of such different types of delivery system is represented on Figure 5.