An important achievement in the field would be Schrödinger’s wave equation and Dirac[A] who said that, using quantum chemistry calculations, it is possible to calculate the energy of molecules.4 Although this method was very time consuming, as it was developed before modern computers. Now that we have computers fast enough, we can do these calculations for small molecules, however not entire proteins.

The computer being the ‘instrument’ of the computational chemist, chemists in the field have taken advantage of the technological advancement to develop and apply new theoretical methods at an astounding pace.1 The field uses theoretical chemistry methods, which are incorporated into efficient computer programs, that calculate the structure and properties of molecules solids. However, the computation chemistry is used more frequently to make chemical predictions, such as the predication of new drug targets or new reactions, which are investigated later experimentally.2 This literature review will be exploring the computational prediction method of docking.

Docking is defined as a computational method that attempts to predict noncovalent binding of receptor (such as proteins, carbohydrates, nucleic acids, or lipids[B]), and a small molecule (ligand) efficiently. This starts with their unbound structures, structures obtained from molecular dynamics simulations[C], or homology modelling.6Simply, molecular docking is used for computational structures that attempts to predict the structure of the intermolecular complex formed between two or more molecules7: a receptor and a ligand8, or in this review: a protein and a ligand.

After its development in the 1980’s7, docking remains a field of vital research, due to its ability to screen virtual libraries9 of drug-like molecules, in order to obtain leads for further drug development6, drug design8, in addition to being a primary component in drug discovery programs7,8, and protein-function prediction.9

The first stage of docking is pose generation. Pose generation is the prediction of the position, orientation, and conformation of a molecule as docked to the target’s binding site[D]. The second stage, scoring, usually consists in estimating how strongly the docked pose of a ligand binds to the target (the strength is calculated by measures of binding affinity or free energy of binding).9 Prediction of the binding energy is performed by evaluating the most important physical-chemical singularities involved in ligand-receptor binding, including intermolecular interactions, desolvation[E] and entropic effects. Ferreira et al. summarised that, the greater the number of physical-chemical parameters evaluated, the higher the accuracy of the scoring function.11However this statement isn’t necessarily true. Gabel et al. states that machine-learning based scoring functions are insensitive to docking poses, and just describe atomic element counts.12

While there are many comparatively strong and accurate algorithms for pose generation currently available, the inaccuracies in the prediction of binding affinity by scoring functions, continue to be the main restricting factor for the reliability of docking. Despite the thorough research over more than two decades9, the exact prediction of the binding affinities for larger sets of protein-ligand complexes, is still one of the most significant problems in computational chemistry.

The earliest reported docking methods were based on the ‘lock-and-key’ assumption proposed by Fischer13, stating that both the ligand and the receptor can be treated as rigid bodies and their tendency to react with another chemical species to form a chemical compound[F], is directly proportionate to a geometric fit between their shapes.14 This really early method is very limited, due to how limited computers were at the time.  Zsoldos et al. states that, say for an average sized ligand with 6 rotatable bonds, would have a total number of bonds[G] poses at 1020. This number alone is so huge, that a “brute force” evaluation of all said posses with a fast scoring function, processing 2000 poses, would take three billion years on a single CPU. Additionally, even using the largest current super computer available in 2007, at the time the article was written, it would still take twenty thousand years to dock a single ligand.

Realistically, treating the ligand and protein as rigid is an impractical assumption, as most of the time said assumption would be incorrect. However, searching every possible combination of the both the ligand and the protein would take, as stated before, thousands or millions­­­­­ of years to compute.15

Over the last two decades, more than sixty14 different docking tools and programs have been developed for academic[H] and commercial[I] use, such as; AutoDock, AutoDock Vina, Glide, GOLD, LeDock, LigandFit, MOE Dock, rDock, Surflex-Dock, UCSF DOCK and many more[J]. 14,16

AutoDock Vina is a sophisticated, widely used academic docking program that employs a quasi-newtonian optimisation method[O].16 AutoDock Vina (onwards called Vina) was created in 2010 to improve accuracy and performance of its predecessor AutoDock 4. In comparison to AutoDock, Vina gives better results with its rough estimations17 and predication accuracy6.

Vina is fitted to the strength of the potentials to known binding coefficients (Ki or Kd), also including a dispersion term, a repulsion term, hydrophobic term and hydrogen-bond interaction term, and tors term.19 This scoring function is displayed in Equation 1.

is the binding term, can be represented by Ki or Kd

is the as dispersion term (i.e Gaussian steric interaction term)

is the repulsion term, representing the square of the distance if closer than a threshold value

ASK ABOUT WHY WE CHOSE THE PROGRAM

AutoDock Vina was chosen as the preferred program as this research is being performed in an academic setting, and due to it being a free, open-sourced, academic docking program.

Cluster of Differentiation 3820 (CD38), also known as cyclic ADP ribose hydrolase21, shown in Its strucutre is demonstrated in Figure 1 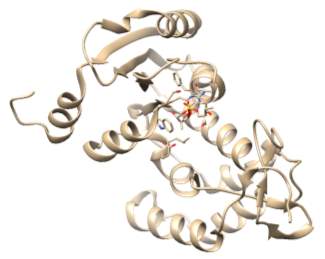 Equation 2 – Structure of the CD38 protein (the ribbons), with the 3ROK ligand, developed in Chimera22

CD38 is a signaling enzyme responsible for catalyzing the synthesis of cyclic ADP ribose (cADPR) and nicotinic acid adenine dinucleotide phosphate; both are universal Ca2+ messenger molecules. 23,24 CD38’s mechanism is demonstrated in Figure 2.

The enzyme is also a type II transmembrane glycoprotein that was initially identified as a surface antigen in lymphocytes.21,26,27 The enzyme is found on the surface of many immune cells including CD4+, CD8+, B lymphocytes and natural killer cells, and functions in cell adhesion, signal transduction and calcium signaling.21 In humans, the CD38 protein is encoded by the CD38 gene which is located on band 15 of chromosome 4.28

CD38 was identified by Reinherz[P] and Schlossman[Q] while conducting detailed analysis of the cell surface, by means of monoclonal antibodies, as part of their pioneer search for molecules acting as T-cell receptors and transducers of signals elicited by the encounter with specific antigens. 20,29

CD38 is used as a prognostic marker for patients with lukeimias and myelomas20,29, being directly invovled in the pathogenesis and result of human immunodeficiency virus (HIV) infection29 and chronic lymphocytic leukemia.21,29 The gene controls insulin release29 and secretion23, susceptibility to bacterial infection23, and the development of multiple conditions including: aging, asthma, obesity, heart disease, inflammation20, and diabetes20,29. Additionally, the loss of CD38 function is associated with impaired immune responses, metabolic disturbances, and affecting the social behavior of mice29 through modulating neuronal oxytocin secretion23.

CD38 was chosen for the research project emmense due to its importance in various cancer studies, medcine related research, and its ability for drug discovery and delivery.

3ROK is Crystal structure of human CD38 in complex with compound CZ-27. It was selected due to its low resolution, low mutation count, and high sequence identity.

6.0 CONCLUSION/WHY ARE WE DOING THE RESEARCH

[B] Also referred to as macromolecules

[E] The removal of solvent from a material in solution

[F] Known as their affinity

[I] Glide, GOLD, LigandFit, MOE Dock, and Surflex-Dock being used for commercial use (Wang et al., 2016)

This literature review has been written by a student and is published as an example. See our guide on How to Write a Dissertation Literature Review for guidance on writing your own.

Seaweed as a Source of Nutraceuticals in Aquaculture

ABSTRACT   Vibrio species are the most widespread pathogen in the aquaculture and all over the aquatic ecosystem. It causes a high rate of mortality in fishes and shrimps. There are few pathogens li...

Advantages and Disadvantages of Biological Control

Chapter 1 General Introduction 1.0 Introduction 1.1 Fish Parasites Parasitism is an obligatory association between two distinct species, in which one species parasite is dependent on its host for nutr...