Perceived ease of use

The Technology Acceptance Model (TAM) is a perfect model which show how users accept and use a technology. In (TAM) the main determinants of user’s acceptance of new technology are perceived usefulness (PU) and perceived ease of use(PEOU) (Davis, 1989).

According to Davis (1989) perceived ease of use refers to “the degree to which a person believes that using a particular system would be free of effort”.The most significant factor on adoption Internet Banking is ease of use. (Padachi et al., 2007).

In Addition, Laforet and Li, (2005) and Eriksson et al., (2005) defined the term perceived usefulness as “the subjective probability that using the technology would improve the way a user could complete”.

Perceived credibility is defined as “the degree to which a user feels the certainty and pleasant consequences of using an electronic application service, when there is no financial risk, physical risk, functional risk, social risk, time-loss risk, opportunity cost risk, and information risk” Jacoby and Kaplan (1972). However, (Ganesan,1994) present another definition of PC stating it as “the extent to which one partner believes that the other partner has the required expertise to perform the job effectively and reliably.”

Previous research has shown that security and privacy are the most concern for consumer, which have a direct or indirect influence on e-banking adoption (Aderonke and Charles, 2010; Sadeghi and Hanzaee, 2010; Alda´s-Manzano et al., 2009; Riyadh et al. 2009; Jahangir N. and Begum N., 2008; Z Liao and WK Wong., 2008). Privacy put barriers on using online services (Hernandez and Mazzon, 2007).

Moreover, Wai-Ching Poon. (2008) and Moutaz Abou-Robieh. (2005) noted that privacy and security factors play an important role in determining the users’ acceptance of e-banking services with regard to age, education level and income level.

The purpose of our paper is to examine the impact of perceived usefulness, perceived

ease of use, perceived credibility on the acceptance of E-banking services by the consumers.

We will extended TAM and add PC into the framework to test the effect of these three factors on e-banking adaption.

The research model tested in this study is showing in figure 2. In the extended model of TAM study, like (Safeena et al. 2009; Alda´s-Manzano et al. (2009); Hanudin Amin, 2007), the attitudes factor has been taken out to simplify the model. The proposed research model includes the variables (PEOU , PU and PC) and their effect on intention to adopt using electronic banking services.

Perceived ease of use

Information Systems relates to systems that allow people and businesses to handle and use data in a multitude of ways. Information Systems can assist you in processing and filtering data, and can be used in many different environments. 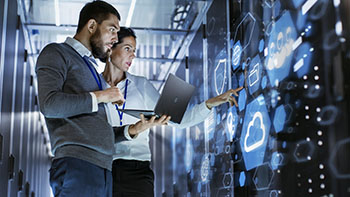 In this paper, the author has considered the standard Open System Interconnection Reference Model of computer networking, to explain about communication and protocols in the distributed computer systems....

This document acts to inform on the limitations of the current paper based attendance monitoring system and the needs of the proposed electronic one, in addition to the means of its implementation....