Has centralisation improved the neurological outcome of children requiring intensive care services in Yorkshire and Humber?

Improvements in the critical care services particularly the centralisation and establishment of specialist retrieval teams has helped in the reduction of mortality rates7. Evidence to suggest that although there is reduced mortality16, there is an increase in the number of children surviving with disability following a critical care admission. We wanted to have a look at this in our population in Yorkshire and Humber.

This is a retrospective cohort study looking at two cohorts of critically ill children admitted to intensive care during pre (2003-2007) and post centralisation (2008-2011) periods. Neurological outcome was assessed using King’s Outcome Score for Children with Head Injury (KOSCHI). This was done at four months after the discharge from critical care by a forty-minute follow up appointment. The cohorts are assessed for any differences in the epidemiology and risk of mortality. The expected mortality was calculated by using the PIM data. Chi-square method was used to compare the cohorts.

There were 214 patients in the pre-centralisation cohort (2003-2007 group) and 104 patients in the post-centralisation cohort (2008-2011 group). There was no significant difference in both the groups in terms of age, expected mortality and pre-existing illness. The mortality risk was 144 per 1000 for cohort 1 and 112 per 1000 for the cohort 2. Standardised mortality rate (SMR) was noted to be 0.73 (95% CI 0.49 to1.04) in cohort1 and 1.05 (95% CI 0.6 to 1.67) in cohort2. KOSCHI score 5 which represents good recovery was seen in 93% of the children from pre-centralisation cohort compared to 82% in the post-centralisation cohort. Similarly KOSCHI score 2-4 which represents the children with new disability after the critical care admission was seen only in 7% in the former compared to 18% in the latter with a statistically significant p-value of <0.001.

Standardised mortality rate was within the confidence intervals but there was a statistically significant difference in the neurodisability of children in between the cohorts. As observed in the other studies we found that there is a trend of increase in the numbers of post critical care morbidity. However we suggest doing further studies looking in to the most recent data with a larger sample size in the post-centralisation cohort.

The aim of the paediatric intensive care is to prevent mortality in children with critical illness and preserve the functional outcomes. We want to see if the centralisation has improved the morbidity and neurological outcome of children requiring intensive care by comparing cohorts before (2003-2007) and after centralisation (2008-2011).

Literature from as early as 1997(Pearson etal1) shows that a substantial reduction in mortality rates can be achieved if every UK child who needed intubation for 12-24hrs is admitted to one of the specialist paediatric intensive care unit.

There were concerns of volume overload affecting the outcome due to centralisation. Tilford etal10 showed an inverse relationship between volume of patients in PICU to risk adjusted mortality or patient length of stay.

With the improvements in critical care services patients are surviving though may have increased morbidity or require secondary admissions with sepsis. It appears that Paediatric critical care may have exchanged improved mortality rates for increased morbidity rates2. From the recent PICANet data5 PICU mortality is running at all time low and is less sensitive as a key performance indicator, however it is the post PICU morbidity that is more important. We also have to understand that increasing numbers of children with poor functional status has implications not only on the rest of the child’s life but also on the family and NHS in terms of providing adequate individual, support both medically and financially.

As a result of changes in service provision from 2008 in Yorkshire and Humber plus the establishment of a dedicated regional retrieval service, more patients were transferred out, using a guideline or matrix, backed up by consultant discussion with transport teams and regional centre.

PICU care was undertaken in one DGH (Hull Royal Infirmary) according to the model given for Acute Major General Hospital in Troop Report, as a hub and spoke arrangement with the regional centre. We wanted to do a retrospective cohort study looking at the neurological outcome of two groups pre and post centralisation (2003-2007 vs. 2008-2011). This information will help us to understand the impact of centralisation on the morbidity of our population.

Aim of the project:

Centralisation of intensive care unit services has improved the neurological outcome of children requiring critical care. This is compared with no improvement as the null hypothesis.

This is a retrospective cohort study comparingtwo cohorts of critically ill children admitted to intensive care pre (2003-2007) and post centralisation (2008-2011).

Exclusion criteria – Children who died during the critical care were excluded from the data analysis in order to keep the focus mainly on the neurological outcome of survivors. Although we have mentioned the mortality, this was to show that both the groups are similar in the predicted mortality.

Case identification, data collection was performed with the help of PICANet & hospital records. The main focus was on the neurological outcome however information relating to baseline characteristics like demographics, type of illnesses, background illness, syndrome, disability, need for mechanical ventilation or intracranial pressure monitoring was obtained. All children with pre-existing illness (chronic illness, syndrome) were scored depending on whether they reached to the similar stage of neurodisability prior to getting unwell.

Traumatic brain injury (TBI) is a non-degenerative, non-congenital insult to the brain from an external mechanical force, possibly leading to permanent or temporary impairment of cognitive, physical, and psychosocial functions, with an associated diminished or altered state of consciousness50.

Mortality is something, which is influenced by a number of factors. In order to make sure that the cohorts are similar we usedPaediatric index mortality6 data (PIM2) to obtain the expected mortality. Standardised mortality rate (SMR) was calculated as a ratio of observed deaths in PICU and expected deaths. The data for PIM2 and SMR was obtained from PICANet.

This project is considered for service evaluation and the data was obtained from PICANet so ethical approval was not needed. We had approval from the hospital clinical governance committee to access the patient records. 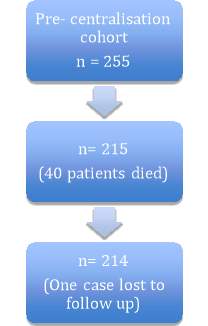 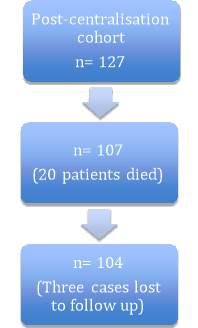 Table2. Summary of the results

Figure 2 – Showing the organ system involvement in both the groups

Figure 3 – Percentage of post-operative cases in each group

Figure 4 – Types of surgery among the cases 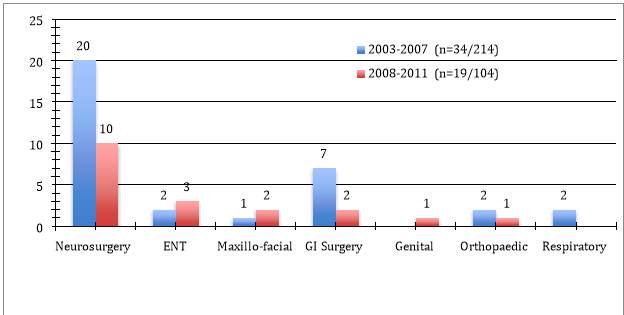 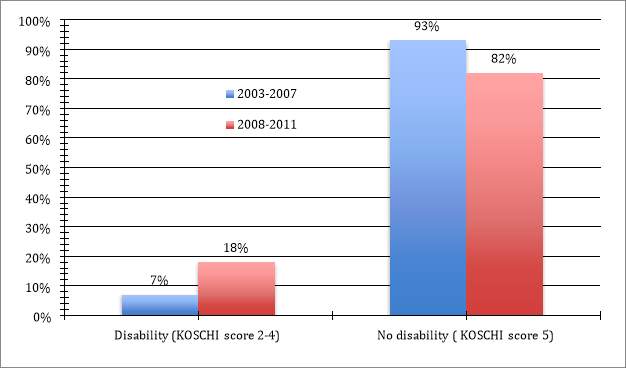 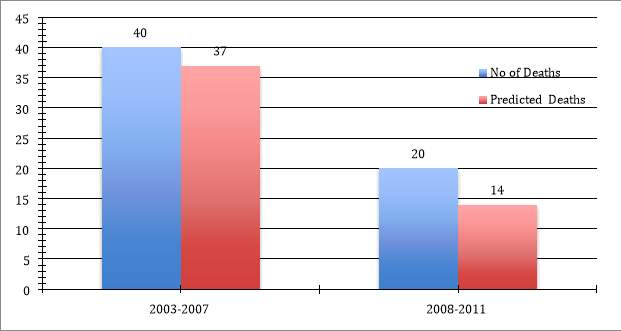 Figure 7- Showing the Standardised Mortality Rates in each group 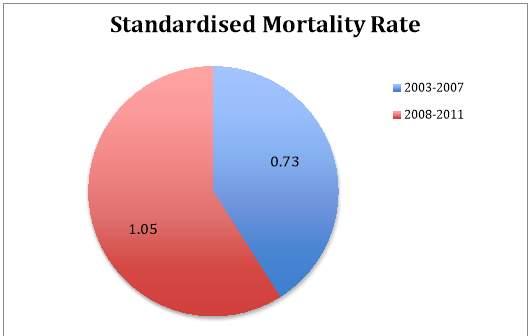 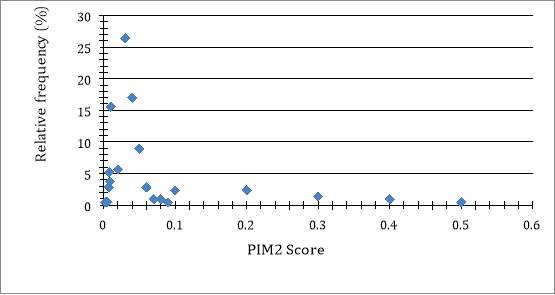 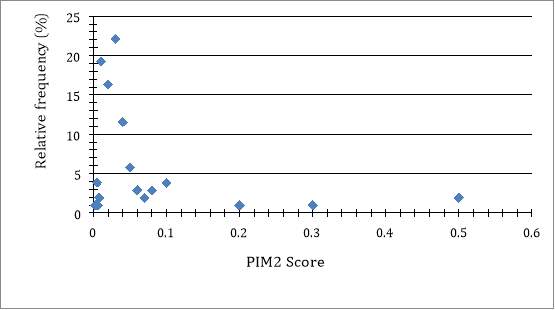 The retrospective cohort study showed an increase in the number of children surviving with disability in the post centralisation cohort.

KOSCHI score five represents good recovery and was seen in 93% of the children from pre-centralisation cohort compared to 82% in the post-centralisation cohort. Similarly KOSCHI score two to four represents children with new disability after the critical care admission, was seen only in 7% in the former compared to 18% in the latter with a statistically significant p-value of <0.001.

The cohorts were almost similar in majority of the aspects. Pre-existing illness (31% vs 27%), primary sepsis (42% vs 35%) & traumatic brain injury (18% vs 12%) was seen in slightly higher percentage in the pre-centralisation cohort. There were more children with the neurological (41% vs 24%)& respiratory  (33% vs 21%) illnesses in the post-centralisation cohort.

Children requiring mechanical ventilation were almost similar in both the cohorts (83% vs 85%). With current advances in the non-invasive ventilation we would have expected this figure to be less in the post-centralisation cohort but we didn’t see that in our study. This could be because we had 12% more cases with respiratory illnesses in the post-centralisation cohort.

Our neurological outcome results correlate with what other studies have shown in the literature review. Pollack etal2 compared morbidity before and after PICU admission between 1990 group and 2011-2012 groups, showed a rise in numbers to 4.8% from 3.1%. Namachivayam & Frank Shann etal study4 from Melbourne showed children surviving with moderate or severe long term disability at long term follow up increased from 8.4% in 1982 to 17.9% in 2005 -2006 (p<0.0001).

Aspesberroetal18 did a literature review looking at articles from 1980 to 2015 on children surviving critical illness. It also concluded similar results. They mentioned that thekey determinant of the outcome in critically ill children is multi-factorial. This includes diagnosis (trauma19-21, sepsis17, 22, meningo-encephalitis23-27), presence of chronic co-morbid conditions28-39 and type of treatment received (prolonged CPR40-42, long-stay patients43-47, invasive technology48, 49).  Our study had 14% more neurological illness in the post-centralisation cohort when compared to the other cohort. However the severity of the illness was similar in each group as suggested by the PIM2 scores from PICANet.

Important figure to note was that 82% of the cases were back to pre-morbid status in the post-centralisation cohort. This was significantly better than figures from the other studies like Namachivayam & Frank Shann etal study4 had 69% and Pollack etal2 had 63%.

Looking in to the clinical practice pre and post-centralisation there were changes in terms of how we manage critically ill children. During the pre-centralisation period, the patients experienced a uniform care13 provided by the experienced Intensivist and nursing staff at the bedside. Compliance with the international consensus guidelines for the treatment of sepsis was adhered. Mean BP was targeted at 50th centile during the course of illness. We know that these measures help us in decreasing the organ dysfunction and thereby improving the outcome.12, 14

Post-centralisation sees a different system where the local intensive care team is involved in a telephonic conversation with an Intensivist at the regional PICU. This may make the decision making process difficult as the clinician providing advice is not by the bedside. It is hard to calculate how much impact this has on the decision making process and ensuring appropriate management when compared to the care provided at bedside by an Intensivist. There are studies9, 11 to suggest that telemedicine has helped the improved outcome in children admitted from emergency department.

The higher morbidity and mortality in the post-centralisation cohort could also be due to the fact that we are analysing the results from immediate post-centralisation period. As expected, like with any change we bring in practice, there is a learning curve period, which might not show the best results. If we repeat a review further down the period from the time of centralisation we might have a different outcome. For this reason we would recommend further future studies.

The cohorts belong to two different periods with different types of illnesses; however they were similar in terms of age, gender and severity of illness on presentation as supported by the PIM2 data.

– Having a morbidity score for the pre-existing morbidity prior to PICU admission and another score after discharge from PICU would have helped us in better understanding of the outcome.

– Sample data is collected over a period of 8yrs (2003-2011). Due to the advancements in research and technology, medical care keeps changing over the time. It is difficult to establish how much this has influenced the results. Looking at our results, certainly the post-centralisation cohort (2008-2011) did not benefit from it.

The Association between Infant Food Practices and the Increased Risk of Allergic Diseases Outline Abstract Introduction Hypothesis Exposure to a variety of food antigens as early as 4-6 months wi...

Fall Prevention in Post-stroke Patients: The Power of Social Interactions

Fall Prevention in Post-stroke Patients: The Power of Social Interactions Introduction: Stroke is a health priority in New Zealand (NZ) as it is the most common cause of disability and affects appr...

Linkage between Crime and Homelessness among Veterans with PTSD and Co-Morbid Disorders Introduction Studies show that soldiers undergo fear and violence of war. Warriors with PTSD and comorbid dis...