A patient is attending you for surgery.  The patient is given a dose of penicillin and develops an anaphylactic reaction.  Explain using the normal physiological principles the aetio – pathological reasons for the clinical signs and symptoms and how treatment should be affected.

Anaphylaxis is defined as ‘a serious, generalised or systemic, allergic or hypersensitivity reaction that can be life-threatening or fatal’. This definition was proposed recently by the International Consensus on Anaphylaxis and is intentionally generic in order to encompass both immunologic and non-immunologic anaphylaxis.(1)

Shock is the clinical expression of an abnormality of the circulatory system that results in inadequate organ perfusion, tissue oxygenation and/or cellular oxygen utilization.(2)

Four types of shock are recognised(3):

Patients may experience more than one type of shock simultaneously.

Anaphylactic shock is considered a form of distributive shock, characterised by decreased peripheral vascular resistance and hypotension. However, anaphylactic shock also shares features of hypovolaemic shock due to loss of intravascular fluid, and cardiogenic shock from reduced venous return and myocardial depression.(4)

‘Anaphylactoid reaction’ is a term that was previously used to describe a non-immunologic (i.e. IgE-independent) event which was clinically indistinguishable from a classic, immunologic (i.e. IgE-dependent) anaphylactic reaction. However, the World Allergy Organisation discourages the use of this term and encourages the use of ‘anaphylaxis’ as an umbrella term for all anaphylactic reactions, regardless of whether the underlying aetiology is immunologic or non-immunologic.(5)

The major physiologic determinants of tissue perfusion and systemic blood pressure (BP) are cardiac output (CO) and total peripheral resistance (TPR), given by the formula:

Cardiac output (CO), in turn, is a product of heart rate (HR) and stroke volume (SV), given by the formula:

Biologic or pathologic processes that alter any one of these parameters can result in hypotension and shock. These formulae make it easy to explain all types of shock and the effects it has on the body.(6)

On the other hand, distributive shock (anaphylactic shock) is associated with reduced TPR (due to severe peripheral vasodilatation) and a compensatory increase in CO.

In both scenarios, the formula BP = CO x TPR dictates that hypotension ensues if either CO or TPR are reduced.

Baroreceptors throughout the vascular system detect changes in blood pressure.(6) A reduction in pressure (like in hypotension), activates the baroreceptor reflex and stimulates the sympathetic nervous system. Activation of the sympathetic nervous system results in tachycardia, bronchial smooth muscle relaxation and bronchodilation, and peripheral vasoconstriction, as well as sympathetic activation of the renin-angiotensin-aldosterone system (RAAS). 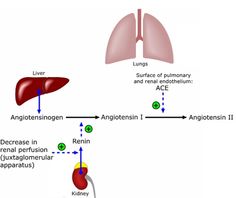 When the kidney detects decreased renal perfusion, it releases the enzyme renin. Renin cleaves angiotensinogen to release angiotensin I; angiotensin I is then converted to angiotensin II by angiotensin-converting enzyme (ACE) in the pulmonary vasculature. Angiotensin II is a potent vasoconstrictor, acting to increase blood pressure and intravascular volume. Angiotensin II also stimulates activation of the sympathetic nervous system.

Shock and end-organ dysfunction occur when these normal physiological mechanisms are overwhelmed.

Reduced tissue perfusion and oxygenation causes hypoxia. Hypoxia can have many consequences, including intracellular oedema, leakage of intracellular contents into the extracellular space, myocardial depression, and further stimulation of inflammatory cascades. These abnormalities manifest as the signs and symptoms of end-organ dysfunction, including tachycardia, breathing difficulties (dyspnoea), increased sweating (diaphoresis), hypotension, restlessness, reduced mental proficiency and abdominal pain. These can all be seen in anaphylaxis.(8, 9)

IgE-dependent anaphylaxis is the predominant cause of anaphylaxis. In people with an allergic tendency, there is an increase in the amount of circulating IgE antibodies, called reagins. IgE antibodies have a strong tendency to bind to mast cells and basophils. When an allergen then enters the body, it reacts with these basophils and mast cells which have been sensitised by IgE reagins, and an allergen-reagin reaction occurs. This results in activation of intracellular signalling cascades and the release of preformed mediators from mast cells and basophils. (9)

It is these mediators, like histamine and tryptase, and the production of inflammatory mediators, which are responsible for causing the signs and symptoms we see in an anaphylactic reaction. (10)

IgE-independent anaphylaxis results from activation of mast cells and basophils without evidence of involvement of IgE. (11)

The major biochemical mediators of anaphylaxis are: 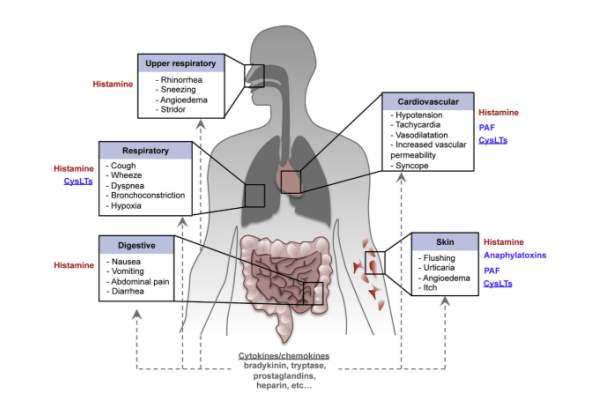 Figure 2. Pathophysiological changes in anaphylaxis and mediators that have been implicated in these processes. (10)

The major cardiovascular sequelae of anaphylaxis include:

The release of histamine results in many of the cardiovascular complications seen in anaphylaxis. The effects of histamine are mediated via activation of H1 and H2 receptors.(12)

Histamine acts on H1 receptors to increase vascular permeability. This increased permeability results in big fluid shifts. During anaphylaxis, it is possible for up to 35% of intravascular fluid volume to shift to the extracellular space in the first 10 minutes of an attack.(13) The binding of histamine to H1 receptors also results in production of nitric oxide, a potent vasodilator. The combination of peripheral vasodilatation and loss of fluid account for the sudden and profound hypotension seen in anaphylaxis, constituting a mixed hypovolaemic-distributive shock as previously discussed.

In the heart, histamine activation of H1 receptors results in coronary artery vasoconstriction. This can result in myocardial ischaemia and arrhythmias. Tachycardia is the most common arrhythmia seen in anaphylaxis. Once intravascular fluid volume starts to fall, baroreceptors detect decreased vascular pressure and activate the sympathetic nervous system to increase heart rate and myocardial contractility, and thus cardiac output (CO = HR x SV).  (6)

Myocardial depression is also a feature of anaphylaxis.(14) This is likely due to the direct mediator effect on the myocardium.

As a result of myocardial ischaemia, clinically patients may complain of chest pain. A 12-lead electrocardiogram may show changes consistent with coronary artery vasospasm, ischaemia or infarction, or evidence of cardiac arrhythmia (e.g. Tachycardia).

The major upper respiratory tract sequelae of anaphylaxis include:

The major lower respiratory tract sequelae of anaphylaxis include:

Bronchial smooth muscle constriction results from the release of inflammatory mediators, with activation of H1 receptors. Once arachidonic acid is metabolised from cells like mast cells and basophils, it leads to the production of proinflammatory mediators including leukotrienes, prostaglandins, and platelet-activating factor. (9, 16) Previously known as slow-reacting substance of anaphylaxis, these mediators can cause spasm of the smooth muscle of bronchioles.(9) Leukotrienes D4 and E4, and prostaglandin E2, are potent bronchoconstrictors and increase vascular permeability.(17)

Activation of H1 and H2 receptors stimulate increased mucous secretion, which can result in airflow obstruction, respiratory arrest, and death.

During anaphylaxis, the allergen can travel to areas of the skin and cause localised reactions. Histamine and other proinflammatory mediators are released from mast cells and basophils, resulting in local vasodilation and increased capillary permeability, resulting in urticaria.(9) 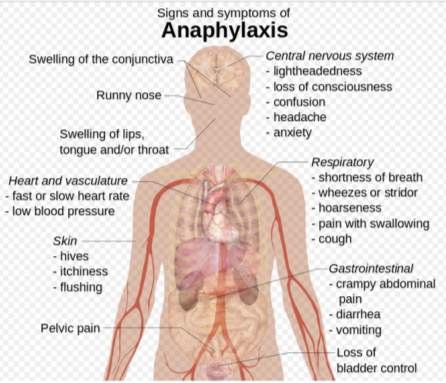 Figure 3. Summary of signs and symptoms of anaphylaxis. (19)

Intramuscular adrenaline (to the mid upper thigh) is the universally accepted first-line treatment for anaphylaxis. Based on an understanding of the underlying pathophysiology of anaphylaxis, the rationale for its use is clear.

Antihistamines and corticosteroids might play a role in reducing respiratory signs and symptoms and delayed anaphylactic reactions, respectively, but do not replace adrenaline as first line therapy.(20)

The patient’s vital signs should be monitored at regular intervals, and if necessary, cardiopulmonary resuscitation should be initiated and continued until the arrival of emergency services.

The occurrence of anaphylaxis during anaesthesia has been reported in the literature, with an incidence ranging from 1 in 4,000 to 1 in 20,000.(21) During conscious sedation or general anaesthesia, anaphylaxis can present as cardiovascular collapse, respiratory arrest, or skin manifestations. Cutaneous manifestations of anaphylaxis can be difficult to diagnose given the nature of these procedures, as the patient will unlikely be able to verbalise their complaint.

During procedures where the patient is sedated or under general anaesthesia, they can be exposed to multiple allergens which may trigger anaphylaxis. The most common of these include latex and antibiotics, which are commonly used in the dental setting.

There have been reports of anaphylactic reactions to benzodiazepines, although these seem very rare. These reports are largely limited to case reports, and most cases involved multidrug use for general anaesthesia, where it was impossible to identify the causative agent. There does seem to be a consensus that Diazepam is more likely to cause an allergic reaction than Midazolam due to the lack of any active metabolites in Midazolam.(21, 22)

Chlorhexidine is another agent commonly used in the dental setting, and is being reported as an increasingly common allergen that can trigger anaphylaxis. (23)

The management of anaphylaxis that occurs during a procedure involving conscious sedation or general anaesthesia is like that described above. This involves stopping the procedure and discontinuing the administration of any potential allergen, calling for help, maintaining the airway, and administration of intramuscular adrenaline.

4. Brown SGA. The Pathophysiology of Shock in Anaphylaxis. Immunology and Allergy Clinics of North America. 2007;27:165-75.

8. Cafaro RP. Hypoxia: Its Causes and Symptoms. Journal of the American Dental Society of Anesthesiology. 1960;7(4):4-8.

The area of Medicine focuses on the healing of patients, including diagnosing and treating them, as well as the prevention of disease. Medicine is an essential science, looking to combat health issues and improve overall well-being.

Acute gastroenteritis, commonly known as infectious diarrhoea, is the inflammation of the gastrointestinal tract, which can result in vomiting, abdominal pain and persistent diarrhoea. ...

This paper will discuss the barriers within referral pathways of identification of females at high risk of familial breast cancer in England....