The Bank of America over the years has been the subject of criticism and scrutiny. With reports of negative income and a 48% decline in stock price. (Dhulekar, Hensaw and Levy, 2013, p. 9).

The Bank of America is facing strategic challenges. To deal with high exposure to mortgage related losses, lawsuits and the slow recovery from the USA economy it needs to position its self for survival (Dhulekar, Hensaw and Levy, 2013, p. 9). Management needs to fully recover their financial position as of before the recession occurred in order to compete against the major competitors who have already financed and paid off their TARP. Management also need to understand the effectiveness to continue merging or acquiring other banks including expanding into other locations given that their financial recovery is slow.(Milner et al., 2013)

Given its depths and complexity of its problems, the scope of this analysis focuses on business segments and where the Bank of America can make changes to defend its strategic position (Dhulekar, Hensaw and Levy, 2013, p. 9).

The Bank of America can make changes to defend its strategic position, but it’s needs to understand its competitive markets and strategic segments and how best to position itself for recovery.

In order for the Bank of America to defend it’s strategic position, two strategic options have been proposed for consideration that can assist and stabilise profits and repair the bank’s mortgage lending investment. ( Dhulekar, Hensaw and Levy, 2013, p.9)

Acquire new products to offer its customer in order to differentiate from its competitors and earn new market shares and grow the market.

The Bank of America can easily spread their activities outside of the United States of America (USA) and grown in the market.  They can achieve this by developing products, services with foreign banks and achieve better margins in emerging countries, whereby benefiting from economies of scale, there are fewer competitors and taxes.

Political: Bank of America faces pressure of paying back the Federal Reserve TARP funds following a bail out during the financial crisis (Dhulekar, Hensaw and Levy, 2013, p.14)

Economic: Unemployment in the USA is constant at around 8%-10%. The high unemployment rate will result in high savings, low spending, and low borrowings (Neeraj Dhulekar,Chris Hensaw,Ethan Levy, 2013, p.15)

Legal: Bank of America faced investigations from the Securities and Exchange Commission (SEC) of the large bonus paid at Merrill Lynch, which upset their shareholders. A law suit settlement was reached to shareholders in the amount of $150 million (Dhulekar, Hensaw and Levy, 2013, p. 15)

Its main stakeholders are investors, shareholders and its customer base (depositors). However, its biggest financial revenue and profit takings come from mortgage loans to investors making it the largest mortgage provider in the USA following the acquisition of Countrywide Financial in 2007. A wrong direction in management could potentially increase in debt and have a ripple effect on the USA economy.

Management needs to fully recover their financial position as of before the recession occurred in order to compete against the major competitors who have already financed and paid off their TARP. Management also need to understand the effectiveness to continue merging or acquiring other banks including expanding into other locations given that their financial recovery is slow.

Lessons learned must be a key focus for management and understand where they went wrong in the past, namely:

“Bank of America is the world’s largest bank based in Delaware and operating under USA. federal law with its headquarters based in Charlotte, North Carolina. It serves individual customers, small and middle enterprises, and large corporations in 175 countries. Bank of America business lines includes banking, investing, asset management, and risk management products and services. In United States alone, BOA had 59 million customers served through 6000 retail banking offices, 18000 ATMs, and online banking. As of June 30, 2008 it had total consolidated assets of $ 1.7 trillion, deposits of $ 785 million, and stockholders’ equity of $ 163 billion)” (Yulianto and Adrian, 2017, p.2)

Its product lines consist of: 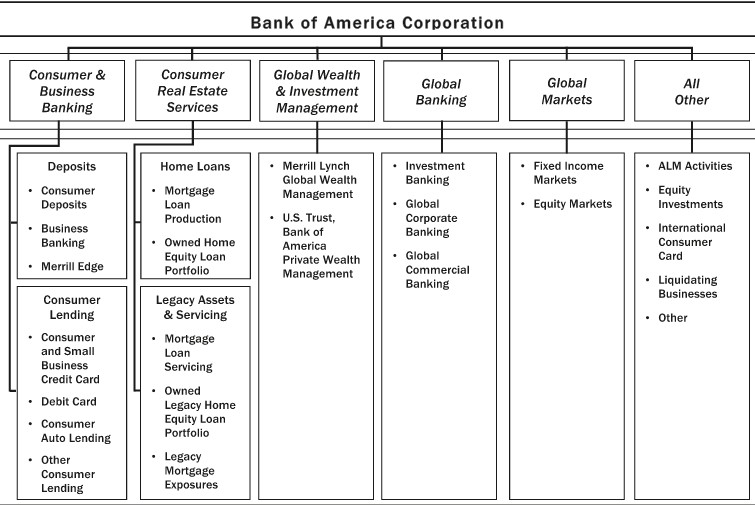 “Bank of America’s strategy over the past 5 -10 years has been based on expanding its product line by merging and acquiring Countrywide to expand its mortgage portfolio and Merrill Lynch to expand its investment banking customer base and product line. Their strategy has been based on personalisng its products across customer segments as a key driver for positioning. However the financial crisis had impacted and its strategy and put the bank into a complex and costly mess” (Dhulekar,  Hensaw, amd Levy, 2013,p. 37)

I. Business Definition and Mission

“The Bank of America is a multinational institution which provides it’s customers services in investment and wealth banking. It has a net asset base of $2.2B and ranked the fourth (4) largest bank in the USA with a total capitalization value of over $2B”. (Dhulekar, Hensaw and Levy, 2013, p.9) 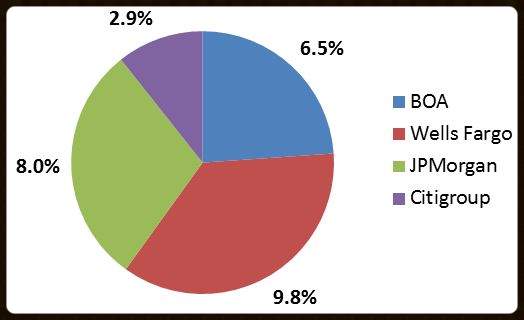 “It main purpose is to make opportunity possible for all customers and client and every stage of their life. Its objectives are to services it three customer group, offer all of its capabilities in the US and investment capabilities world wide” (Kilpatrick, 2015)

“Bank of America competitive advantage lies in its effective strategic planning process, huge asset base with regards to infrastructure, technology and talent, sophisticated financial technology and IT and its ability to leverage the government relationship for favorable macro- economic conditions”(Kilpatrick, 2015).

The key strengths are:

The key weaknesses are:

The strategic merges where seen as an important strategic move by the Bank of America. Its customers were losing faith with the bank given the low uncertainties of the economy and market (Dyer H., 2005).

By acquiring Merrill Lynch, the bank was able to expand its investment portfolio and increase its global presence. However some may argue that the United States Government forced the Bank of America to acquire Merrill Lynch to avoid the same outcome and faith that occurred to the Lehman Brothers.

The key initiatives from the acquisition meant that the Bank of America could offer its customer base a greater investment product which prior to the acquisition was week. In addition Merrill Lynch brought its large resource and extensive technology and infrastructure capabilities.

The acquisition of Countrywide provided the Bank of America with an entry into the mortgage service markets and expanded its capabilities in that a market.

Based on the Bank of America’s mortgage business as being the case for its financial problems at the time of the analysis, the analysis only takes into consideration the mortgage segment evaluate its attractiveness to formulate recommendations for moving forward. 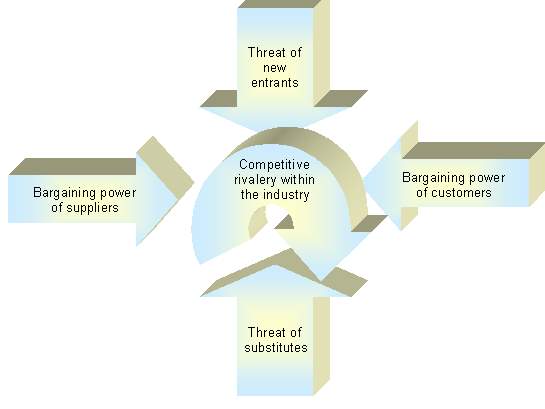 Threat of Rivalry: “Threat of rivalry is high with low diversity among competitors. High barriers to entry and low demand in current economic situation which forces incumbents to compete and cut costs”(Dhulekar, Hensaw, Levy, 2013p. 12 & 13).

Buyer Power:  “Given that switching costs are highly competitive, this allows buyers to shop around ”(Dhulekar, Hensaw, Levy, 2013p. 12 & 13).

Threat of Substitute: “This is low because small banks cannot not complete for loan serving with larger banks”(Dhulekar, Hensaw, Levy, 2013p. 12 & 13).

Following on from the 2008 financial crisis, the markets experienced a global downturn which resulted in the collapse of the USA housing market. A number of major banks went into bankruptcy, stocks were greatly devalued and the government had to step in to stabilise collapse through bank obligation assurance ( Dhulekar, Hensaw, Levy, 2013, p. 19)

The Bank of America’s main competitors are as follows.

The right strategy for the Bank of America will be critical and it must be consistent with the current banking environment and their own competitive advantages and resources.  its long-term objective is to grow increase annual earnings and revenue (Milner et al., 2013)

The bank of America needs to consider two strategic options based on our analysis as discussed in this paper.

Acquire new products to offer its customer in order to differentiate from its competitors and earn new market shares and grow the market in acquisition.

The Bank of America can easily spread their activities outside of the USA and grown in the market.  They can achieve this by developing products and services with foreign banks achieve better margins in emerging countries than in their own thanks to the economy of scale, there are fewer competitors and taxes.

Kilpatrick, A. (2015) Bank of America Final Presentation by Amanda Kilpatrick on Prezi. Available at: https://prezi.com/nrundmjduscp/bank-of-america-final-presentation/.

Business Analysis is a research discipline that looks to identify business needs and recommend solutions to problems within a business. Providing solutions to identified problems enables change management and may include changes to things such as systems, process, organisational structure etc. I. INTRODUCTION a. Topic Chosen and its context In this Research and Analysis project Report, I will be analyzing the financial performance of ‘Royal Dutch Shell Plc’. I will be identifyin...

This strategic analysis will look at the operations of USPS, starting from inception to where the entity is today with a focus on its vision and mission....

This report provides an analysis of the effectiveness of the innovative product system at Juice Life Smoothies and suggests improvements to maintain efficient product delivery and efficient business operations....