This literature review provides a comprehensive overview of current technologies that are used to monitor microorganisms in the food industry. A focus is placed on monitoring fermenting organisms offline (by taking samples) and online (in situ, and ex situ) by analyzing exiting gas streams and spectrometric monitoring. Additionally, technologies designated for the detection and monitoring of pathogenic bacteria are discussed. Common technologies and detection methods used in the food industry include indicator organisms, plate counts, Most Probable Number (MPN), dye-reduction tests, immunological analysis, and polymerase chain reaction (PCR).  It is important to note that this literature review does not provide an in-depth analysis of all technologies available, but rather a summary of the most used technologies that are found in industry. In addition, food and environmental standards were discussed, particularly Hazard Analysis & Critical Control Points (HACCP), Good Manufacturing Processes (GMPs), and Sanitation Standard Operating Procedures (SSOPs). Although this review is sufficient for the technologies and standards that are currently available in the industry, technologies are constantly evolving to optimize processes and make them the most rapid, specific, and inexpensive as possible. Table of Contents 1.0 Introduction 2.0 Microorganisms in the food industry 2.1 Fermenting Organisms 2.1.1 Yeasts 2.1.2 Lactic Acid Bacteria 2.2 Mold 2.3 Pathogens 3.0 Monitoring Fermenting Organisms 3.1 Rationale for Monitoring 3.2 Offline Monitoring 3.3 Online Monitoring 3.3.1 Exit or Off Gas Analysis 3.3.2 Spectrometric Monitoring 4.0 Methods for Microbiological Examination of foods 4.1 Indicator Organisms 4.2 Classical Enumeration Methods 4.2.1 Plate Counts 4.2.2 Most Probable Number 4.3 Dye-Reduction Test 4.4 Immunological Methods 4.5 Polymerase Chain Reaction-Based Methods 5.0 Microbial Quality of Food 6.0 Environmental Monitoring Standards 6.1 Hazard Analysis & Critical Control Points 6.2 Good Manufacturing Practices 6.3 Sanitation Standard Operating Procedures 7.0 Conclusion and Future Prospects 8.0 References

A wide range of microorganisms from branches of yeast and bacteria are used in the food industry. The primary use of these organisms is for the production of bakery products, dairy products, wine, and beer through fermentation (Batt, 2014). Fermentation is also a helpful process for preserving food products (Batt, 2014). A variety of technologies and methods can be used to monitor these fermenting organisms. Monitoring these processes are essential to ensure product consistency, safety, and optimal economic efficiency (McNeil, Archer, Giavasis, & Harvey, 2013). Fermenting organisms and monitoring techniques will be discussed later in this literature review. Microorganisms can also be present in the food industry in the form of pathogens (Batt, 2014). Pathogens such as E. coli and Salmonella, which are commonly found in food, can be detrimental to human health if consumed. It is important to remove these pathogens from food and water before they are consumed to ensure the safety and well-being of the consumer. To ensure the quality of food, a variety of tests are used to detect pathogenic organisms on the food and the surrounding environment (Filion, 2012).  In this literature review, common detection tests, including enumeration methods, immunological analysis, and PCR, will be discussed. Government regulations and Canadian Hygiene and Safety Standards for food and the surrounding environment, such as Hazard Analysis & Critical Control Points (HACCP), Good Manufacturing Processes (GMPs), and Sanitation Standard Operating Procedures (SSOPs) will also be reviewed.

2.0 Microorganisms in the food industry

Yeasts are fungi that asexually reproduce by budding or fission, which results in growth primarily comprised of single cells (Kurtzman, Fell, & Boekhout, 2011). The primary role of yeast in the food industry is the fermentation of beers, cider, wines, distilled spirits, bakery products, cheese, sausages, and other fermented food (Kurtzman et al., 2011). These products are produced by the breakdown of glucose to ethanol and carbon dioxide. Yeast species such as Saccharomyces cerevisiae, Ogataea polymorpha, and Komatagataella pastoris have also been developed as industrial organisms for the production of proteins and enzymes (Kurtzman et al., 2011). Saccharomyces cerevisiae is the principal yeast used worldwide due to its key role in many food fermentations (Kurtzman et al., 2011).

A mold is a type of fungus that grows as multicellular filaments called hyphae. Mold is a common food contaminant which, under the correct conditions (cool and damp environments), can reproduce rapidly and cause food spoilage.

A pathogen is an organism that lives on or in a host organism. Primary pathogens can cause acute, life-threatening infections and can spread rapidly from host to host (Alberts, 2017). Other pathogens infect an individual without causing disease (Alberts, 2017). Pathogens can be divided into two groups: Non-bacterial agents and bacterial agents. Escherichia coli, Salmonella, Cronobacter Species, and Mycobacterium Species are common pathogenic bacteria found in food (Adams, Moss, & McClure, 2016). These bacteria can cause side effects including, but not limited to, abdominal cramping, vomiting, fatigue, fever, diarrhea, and death, if not treated promptly (Adams et al., 2016). Non-bacterial agents include Helminths and Nematodes, Protozoa, Toxigenic Algae, Toxigenic Fungi, Foodborne Viruses, and Spongiform Encephalopathies (Adams et al., 2016). These agents can also cause debilitating infections if consumed (Adams et al., 2016).

Before discussing the technologies employed to monitor fermentation, it is important to understand the types of fermentation processes used for food manufacture. There are two distinct types of fermentation processes; the oldest being solid substrate fermentation (SSF), and the other being submerged liquid fermentation (SLF) (McNeil et al., 2013). SSF has lower energy inputs than SLF, simpler reactor systems, suitability for small local scale production, ease of product recovery, and the ability to use waste materials as substrates for growth (McNeil et al., 2013). On the other hand, SSF systems are heterogenous, which presents difficulties in taking representative samples and effective product control throughout the reactor (McNeil et al., 2013). As a result, most fermented foods are now produced using SLF. The technologies discussed in the following section pertain to SLF processes.

Monitoring SLF processes are necessary to ensure product consistency and safety. Additionally, by monitoring SLF, nutrient utilization, yield, and productivity are measured and can be optimized to reduce process economics (McNeil et al., 2013). 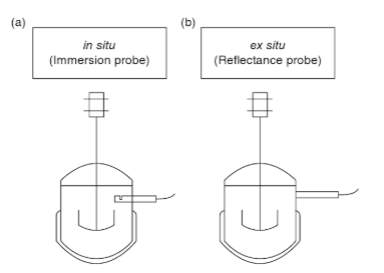 Figure 1: Online Fermentation Monitoring Probes (a) in situ (b) ex situ. The ideal sensor for food manufacturing should be reliable, inexpensive, physically resilient, simple to implement and operate, capable of generating real-time information, and capable of monitoring multiple fermenters at a time (McNeil et al., 2013).

Due to stronger absorbances in the fundamental IR, lower analyte levels can be measurable using MIRS (McNeil et al., 2013). Although studies have proven the potential for MIRS in food fermentation, MIRS has been less employed than NIRS. In comparison to NIRS, MIRS is more costly because the probes require expensive wave guides and multiplexing technology (McNeil et al., 2013).

Raman spectroscopy is used even less than MIRS in fermentation monitoring due to the high cost of Raman systems in comparison to NIRS/MIRS (McNeil et al., 2013). Although the results from Raman spectroscopy are highly accurate, due to the cost and complexity of the Raman system, it will be a long time before this system is used as a routine tool (McNeil et al., 2013).

4.0 Methods for Microbiological Examination of foods

In the previous section, positive uses for microorganisms are outlined. Although some microorganisms may be beneficial to humans, most organisms found in food are harmful to human health. Foodborne pathogens are the cause of many diseases worldwide (Forsythe, 2012). It is important to test and monitor food production to ensure: (1) the food meets standard regulations (will be discussed later); (2) food meets internal standards set by the processing company or purchaser; (3) food materials entering the factory meet standards from the supplier; and (4) sanitation in the surrounding environment is being maintained (Forsythe, 2012). Figure 2 outlines the detection methods used in the food industry for the detection of foodborne pathogens (Priyanka, Patil, & Dwarakanath, 2016). Selected methods will be discussed further. 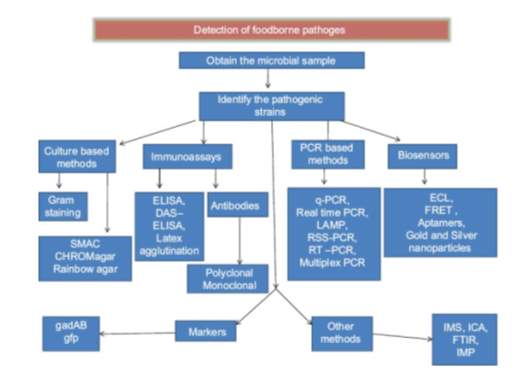 In this method, agar plates are used to identify the number of actively growing cells in a sample. Selective and differential media are generally used to isolate and identify specific organisms such as coliforms. Selective media allows certain organisms to grow by using selective agents such as antibiotics, dyes or chemicals, whereas differential media uses agents that change bacterial growth patterns to differentiate groups of organisms (Otero Silva, Franceschini, Lavrador, & Candido, 2004). In the food industry, non-fecal and fecal coliforms are grown on selective media such as Sorbitol MacConkey agar (SMAC) and Violet Red Bile agar (Forsythe, 2012). Food samples are employed on the agar by the ‘pour’ or ‘spread’ plate method as shown in Figure 3 (“A comparison between the pour plate method and the spread plate method | Scientific Diagram,” n.d.). In the ‘pour’ plate method, an empty plate is inoculated with the sample and melted nutrient agar is mixed with the sample. In the ‘spread’ plate method, the medium agar is pre-poured and allowed to solidify. Diluted samples are spread over the plate and incubated to allow growth (Forsythe, 2012). Once incubated, colonies will grow on the medium, and the number of colony forming units (CFUs) are counted. The number of CFUs directly relate to the number of viable cells found in the sample. The success rate of this method is high, and these methods are cost-effective. The major drawback is the slow growth and long incubation times (Priyanka et al., 2016). 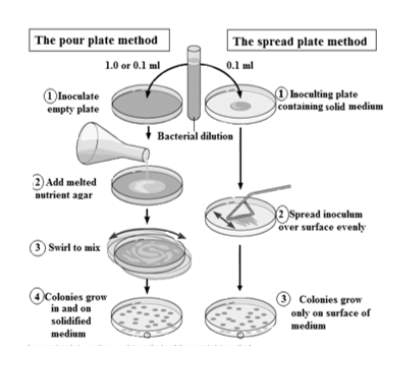 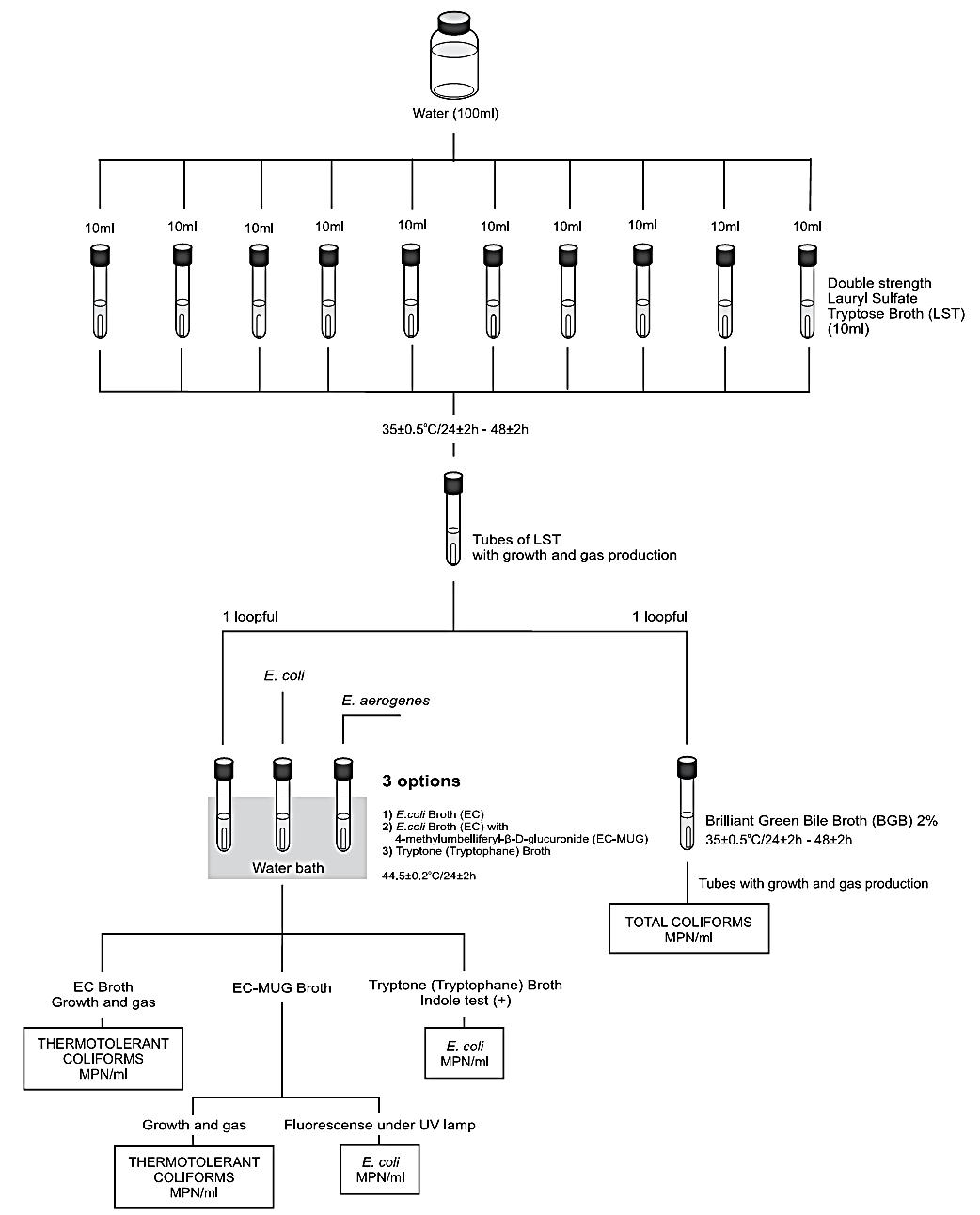 The number of allowable pathogens found in food varies based on the type of food being analyzed. Based on government standards, a type of microorganism, group of organisms, or toxin produced by a microorganism, is specified to either not be present at all or will be allowed up until a certain concentration. For instance, Table 1 outlines the microbiological meat standards in Europe (Todd, 2004). Table 1: European Standards for pathogenic microorganisms in meat. There exist standards for each food and pathogen that must be met to guarantee safe and quality food for consumption.

Similar to food, the environment (e.g. a process control line, or a food processing factory) must abide by government standards to ensure optimal food-safety and decrease the risk of foodborne illness. These standards vary based on the location of the establishment, the food produced, and the equipment used.

Microorganisms are found in abundance in the environment, especially in food and water. Some microorganisms can be beneficial to humans (in this report, the focus was placed on the process of fermentation) and others pose health risks to humans. In the food industry it is important to monitor food processes to optimize processes, reduce expenses, decrease the risk of food-borne illness, and maintain food standards outlined by HACCP. It is important to note that detection and monitoring technologies are constantly being improved and developed. This area of research and experimentation will continue to evolve to make technologies the most rapid, sensitive, specific, and cost-effective as physically possible.

Food and Nutrition studies deal with the food necessary for health and growth, the different components of food, and interpreting how nutrients and other food substances affect health and wellbeing.

Farm to Fork: is it a wasteful journey? Is food waste avoidable in today’s society? What impact does it have, and why do we have to reduce it? An insight into why there is so much food waste and wha...

DESIGN OF AN ENERGY EFFICIENT CONDENSING UNIT OF A 20 CUBIC FOOT COMMERCIAL CHEST FREEZER Abstract Refrigeration is an important aspect in the preservation of food before it is prepared, served or...

Biology 3.2B – introducing a sugar tax in New Zealand. Sugar consumption is a topic that raises several controversial issues. The most common being should sugar be consumed and if so, in what amou...