From online invective to the notorious big-kid vs little-kid physical power struggles, bullying is a pervasive issue that Texas schools must address. In 2011 the Texas Education Code (TEC) added an Act that requires all school districts to adopt policies and procedures to prohibit bullying and deal bullying incidents1. While this Act may have reduced bullying in some school districts, Pleasant View High School (PVHS) is still experiencing an unacceptably high number of bullying incident reports. In this anti-bullying proposal will examine bullying at PVHS from an evidence-based public health perspective using the PERIE approach and two programs for anti-bullying programs are briefly described.

As the first step of the PERIE approach, the definition of bullying must be well understood. The Texas Education Code (TEC) defines bullying in regards to its medium (written, verbal or electronic expression), location (on school property, at a school event, or in school vehicles), effect (physical harm, property damage, fear of harm) and frequency and intensity (repetitive, severe, pervasive) and states that it creates an “intimidating, threatening, or abusive educational environment for a student”1. While it is agreed that bullying involves unwanted, intentional, repeated aggressive behavior and an observed or perceived power imbalance1-4, the CDC elaborates that bullying arises not only due to students’ behaviors but is also shaped by witnesses’ reactions to bullying as well as community norms and other social factors concerning bullying2,5. As the CDC recommends2, the anti-bullying programs in the latter half of this paper will address these larger risk factors of bullying instead of narrowly focusing on the students involved in an isolated bullying incident.

Problem The 1) burden of bullying 2) the course of bullying and 3) the distribution of bullying6 should be identified through PVHS surveillance, the CDC’s Youth Risk Behavior Survey (YRBS)7, School Crime Supplement (SCS) and Health Behaviors in School-aged Children (HBSC)2. Prevalence of bullying incidents at PVHS should be calculated (how many students are being bullied?) and can include the percentage of children bullied or engaged in a physical fight or threatened with a weapon on school property, and types of bullying (i.e. physical, verbal, online). The course of bullying should answer how often bullying occurs, how likely it is that bullying incidents occur, and what happens after a bullying incident occurs6. Finally, the distribution of bullying among students should be examined (are some students experiencing more incidents of bullying than others?). Analysis should include who is bullied and being bullied (e.g. gender, age, race, socioeconomic status, and other demographics), where they are bullied (e.g. in class, at recess, on the bus), when they are bullied (time of the year or day) and the school climate (e.g. fear of bullying, who is told, perceived reasons5). Careful examination of group associations and frequencies may reveal possible risk factors to bullying that can be targeted in prevention programs.

Etiology Reasons why bullying can be by identified through “contributory causes”6 of bullying which must satisfy three criteria: the cause is associated with bullying, the cause precedes bullying time-wise, and if cause is altered then bullying is altered. These potential causes or risk factors can be identified through cohort, case-control, and randomized controlled trials (if available), or through natural experiments in schools (e.g. surveillance of school bullying pre and post 2011 TEC anti-bullying Act). To establish potential causes of bullying, three of Hill’s criteria for causation8 should be analyzed: strength of the relationship, dose-response relationship, and consistency of the relationship6. Quantitative measures include calculating relative risk to assess the strength of the relationship between risk factors and bullying
(e.g. risk of bullying while being white versus risk while not being white) as well as dose-response relationships (e.g. lower parental income and increased bullying incidents). The consistency of the relationship of risk factor and bullying in different schools and districts can be determined through analysis of the YRBSS, SCS, and HBSC.

RecommendationsA systematic review or meta-analysis of the literature concerning safe and effective evidence-based bullying prevention programs should be performed to assess the quality, effectiveness, and magnitude of impact of the interventions (see Ttofi and Farrington9) for possible implementation depending on the distribution of the problem and stakeholders’ interests at PVHS. The number of elements in the program, the duration, intensity (for students and teachers), the cost, and the effect size on bullying and victimization should be ascertained. Interventions can then be appropriately tailored to the PVHS setting and population for feasibility and sustainability, and strong recommendations can be made.

ImplementationPrograms that maximize benefits and minimize harms in the “Recommendations” section can be implemented using Riegelman’s “When-Who-How” approach6. Concerning when to intervene, primary (preventing bullying), secondary (reducing risk factors for bullying, training youth and adults to identify and report bullying), and tertiary evidence-based interventions (dealing with bullies, mitigating effects of bullying) can be implemented as determined necessary by previous analysis of the problem (e.g. which intervention time will have the most impact in the specific population at PVHS). Stakeholder input should be collected to determine the largest potential impact time. Distribution analysis during the “Problem” part of the PERIE approach can determine at whom to aim the intervention, i.e. who would benefit most from the intervention. The intervention can be targeted at the entire school population or can target those students with previously-identified high-risk factors or causes for bullying in PVHS (e.g. female, 9th grade, white, etc.), or can target anywhere on the CDC’s intervention spectrum: the individual, the relationship, the community, society, or population as a whole2,6. Concerning how to implement programs, information concerning bullying and bullying prevention (e.g. through classes, trainings), motivation and to stop bullying (e.g. rewards for students/classes without bullying incidents), and obligation to prohibit bullying (e.g. school rules) can be implemented.

EvaluationThe RE-AIM framework can be used to evaluate the anti-bullying program6. To determine reach, who the intervention is actually affecting must be known; to evaluate effectiveness, it is important to know the actual impact (e.g. benefits and harms) on the target population. Adoption identifies how well the program is accepted by stakeholders (i.e. students, administrators, parents); implementation refers to how the program should be modified to better impact the target population; maintenance information includes strategies to ensure sustainability of the program in the target population and among stakeholders. In this stage, information to be collected includes prevalence and incidence rates post intervention (including student and parent demographics and potential school-related risk factors such as academic performance), qualitative information from stakeholders (students, parents, administrators, school board officials) concerning their attitude toward the intervention, and potential sources of future funding to sustain the intervention for future years.

Many effective evidence-based anti-bullying interventions exist. In 2010 Ttofi and Farrington conducted a systematic review and meta-analysis on school-based programs. The following high-risk and population approaches draw off their findings.

High-risk Approach This type of approach at PVHS would include a program that targets those at highest risk for bullying, e.g. those with the highest or strongest risk factors for bullying as identified in the problem part of the PERIE approach. From data from the 2011 YRBS, this could potentially be white females (25.2%) or all ninth graders (24.2%). As the RE-AIM framework teaches, reach is an important component, so this approach would focus on all ninth graders.

Ttofi and Farrington found that while anti-bullying programs decreased bullying, specific program elements such as working with peers to tackle bullying (including peer mediation and mentoring and encouraging bystanders to prevent bullying) actually increased bullying and victimization. Therefore, instead of implementing programs that teach students to be the monitors of bullying, a more effective high-risk approach would be to implement an evidence-based program in the ninth grade that focuses on parent training and meetings and is intensive for students (20 hours or more), and is based on the Olweus Bullying Prevention Program (OBPP)9. The approach should include a number of additional key elements (16 main elements, see Appendix) of effective programs as found by Ttofi and Farrington as a dose-response relationship between number of program elements and effectiveness in reducing bullying was found9. Elements such as a long duration of 270 days or more, strict disciplinary methods (including serious conversations with bullies, deprivation of privileges, and trips to the principal), and enhanced supervision during recess or outside time should be implemented at PVHS. This would be an example of primary prevention. However, while such a program may be effective, Ttofi and Farrington found no evidence that working with bullies or victims alone was effective and recommend entire school-based approaches9.

Population Approach A possible population approach for PVHS would include an intervention that targets the entire school, a more effective method according to Ttofi and Farrington9. The program would include many of the same elements (the main 16) as the high-risk approach but would target a wider audience: the students and their families. Studies have shown children who are bullied do not share their problems with parents and teachers and parents and teachers rarely address conduct issues in bullies10. It has also been demonstrated that family and community attitudes also play a role in bullying5,9, therefore this approach would focus on parent training in the form of educational presentations and regular parent-teacher meetings to discuss bullying.  Additional elements of this program include classroom management and training for teachers and school-wide policies and conferences.

The program would not include short programs of zero tolerance, conflict resolution/peer mediation, or group treatment for bullies, as these have been shown to be ineffective3,9. However, the program would be modeled after the OBPP to reduce the number of bullying incidents, prevent new incidents, and improve relationships among peers3 that is ultimately a primary prevention effort as a combination of individual-level (meetings, individual plan development, supervision) classroom-level (rules and meetings), school-level (bullying prevention committees, staff engagement) , and community-level (spreading anti-bullying messages) components11. Once additional appropriate evidence-based programs are identified and modified, evaluation is crucial to maintain fidelity and sustainability at PVHS.

Below are the 16 main program elements of effective evidence-based programs to reduce bullying as found by Ttofi and Farrington9 (Cat is category of variable, OR is weighted mean odds ratio, duration is in days, intensity is in hours, outcome measure 2+M is two times per month or more versus other measures): 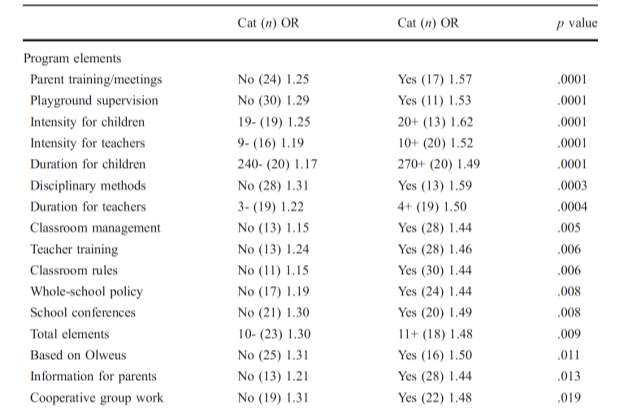 Among Youths: Uniform Definitions for Public Health and Recommended Data Elements, Version 1.0. In. Atlanta, GA: National Center for Injury Prevention and Control, Centers for Disease Control and Prevention and U.S. Department of Education; 2014.

10. Fekkes M, Pijpers FIM, Verloove-Vanhorick PS. Bullying: Who does what, when and where? Involvement of children, teachers and parents in bullying behavior. Health Education Research. 2015(20):81-91.

The term Young People often refers to those between childhood and adulthood, meaning that people aged 17-24 are often considered to be a young person. Abstract Little research has been conducted on the construct of student identification in the context of higher education. Specifically, at Xavier University, a Jesuit university rooted in the found...

Turnover Rate of Millenials in the Hospitality Industry

ABSTRACT The hospitality industry is dependent upon customers in order to be successful. In this concern, the employees of the resort, hotel, or restaurant must be courteous enough to take care of...