Other sections of this example:

Arguably, construction costs are constantly on the rise in the UK. Even though this is the case, the construction methods available in the Industry: Modern Methods of Construction (MMC) and Traditional methods of construction (TMC) have a major impact on the costs, their affordability and longevity. Kozlovska et. al. (2015) in his paper, supports modern method of construction (MMC) as a way of providing efficient project management process, this is because in his opinion it produces better quality products while saving time and cost. Schoenborn, (2012), Kawali and Hawage, (2016) agree that there is an effectiveness in the management process of modular construction that’s allows for saving of costs compared to traditional method of construction. It has been asserted by the National House-Building Council(NHBC, 2012) that one of the basic attractions of MMC is that, houses get to be delivered quickly and cheaper compared to the long process that construction takes in the traditional method. Yet, the Building Societies Association (BSA, 2016) hasn’t come to the agreement that the modern method of construction is cheaper. In a recent report BSA (2016) argued that “modern methods of construction tend to be more expensive apparently due to established techniques but the ranges overlap”. The National Audit Office (NOA 2005) and Kawali and Hawage (2012) in their reports support BSA opinion by suggesting that there is a huge investment that has to be considered before a homebuilder can venture into modern method of construction especially for the modular services in this case the traditional brick and block is considered to be cheaper. The construction industry remains in the limelight for the massive contribution to the economy and averting housing insufficiency in the country, and with the ever increasing population, there is need for more houses and a system that provides affordable houses within a short period of time.

Alternative forms or modern methods of construction (MMC) have a long history in the UK. This method of construction was introduced in the post-war period to provide accommodation quickly and easily to the masses and it has forcefully made its way into the limelight. “…I think that for the first time what you could see is modern methods of construction being pushed because there is no alternative…” (Building.co.uk viewed 29/05/2017) Through the years modern methods of construction  has been combined with traditional method of construction, but in recent times it has become more of a necessity than an option, due to the rise in the demand of houses and housebuilders trying to supply a substantial amount of houses for the growing population. A research carried out by the National Housing Building Council (2015) that showed that “…98% of large and medium-sized house builders and housing associations have used or considered at least one form of MMC in the last 3 years”.

To determine if there is a cost variation and why, this study aims to analyse the common principles that allow for a cost variation in the methods of construction; some of these influential variables are the price of labour, material or methods? At this point, I am not implying or giving the opinion that in the solution for cost effective houses, the traditional method no longer has a place, this is about UK, a developed country, which is not accepting the change and the innovation in construction like Europe and the rest of the world. The Building Societies Association (BSA 2016) succinctly stated that the future housing supply improvement should be updated to something more symbolic of the innovative, efficient, world class housebuilding industry that we want.

For this reason is why this study is done to take an in-depth look into the cost analysis of modern methods such as: timber frame, concrete frame and steel frame. The traditional methods used in this study is brick construction in UK. This study covers a period of 10 years 2007 to 2016 which is a present day cost analysis on the prevailing methods of construction in UK giving a detailed cost variance. Therefore, the author hopes that the outcome of the research will give a better understanding of the prevailing factors affecting the costs of modern and traditional methods of construction. 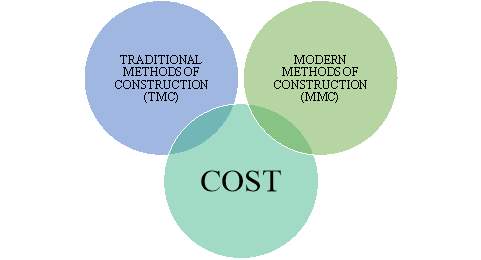 The aim of this study is to examine the extent of cost differentiation in modern and traditional methods of construction in terms of the construction costs of the projects: preliminaries, substructure, superstructure, external works/services and contractor overheads including the cost of labour and materials.

The research on that this paper reports is designed using the principles of explanatory sequential mixed methods, where quantitative research is conducted, analysis of results and explains results in more detail with qualitative research (Creswell 2014). This research represents the cost analysis of modern methods and traditional methods of construction in UK. The study therefore has as its first task data collection via structured and unstructured survey, this is a pragmatic approach to the research and positivism would be achieved by testing the various methods of construction by collecting data from a total of 400 construction projects gotten from BCIS which would be systematic- randomly selected from the available completed building projects in UK. A person-interview survey of some project managers and academics with experience in construction projects by a trained graduate and furthermore deducing a solution to the cost variance in modern and traditional construction methods. This is a pragmatic approach to the research and the study aims to achieve positivism by testing the various methods of construction.

1.6 Scope and Limitations of the research

This dissertation only considers factors that lead to a rise and fall within construction costs and how this affects the methods (modern and traditional) of construction. Consequently, the final outcome of the research would be strictly within the confines of the information derived from journal papers, books and webpages that cover topics focused on modern methods and traditional methods of construction and construction cost as well as information gathered from interviews and questionnaires conducted by the researcher.

1.7 Layout of the dissertation

Finance is a field of study involving matters of the management, and creation, of money and investments including the dynamics of assets and liabilities, under conditions of uncertainty and risk.

Introduction to a dissertation on the relationship between audit fees and the quality of an audit....

Financial Derivatives in Theory and Practice in China