Capturing of relevant patterns in company’s financial data and the implications on the reporting are important for various financial statement users to identify the triggers of the significant deficiencies and material weaknesses. The objective of this study is to construct a company-specific risk score for the companies’ internal weaknesses, as well as to uncover the conditional relations between the independent predictors of firms’ material weaknesses. To do so, Tree Augmented Naive Bayes Network (TAN) algorithm is employed to analyze the data obtained from COMPUSTAT (Research Insight) for one year before the Material Weakness in Internal Control (MWIC) disclosure on several operating and financial ratios such as total asset turnover, profitability, capital intensity, size, current ratio, and operating performance. The proposed TAN method provides novel information on the interactions among the predictors and the conditional probability of MWIC for a given set of relevant firm characteristics.

In recent years, internal controls have played a crucial role within corporate governance for both companies and auditors alike[1–4]. A lapse in systematically securing and double checking these controls can be very costly to companies, both financially and to its reputation; to curb this, Congress mandated compliance to ICOFR reporting for companies[5, 6]. This mandate, SOX, was put in place to protect investors from fraud, loss of investments, and the restoration of investor confidence. SOX also serves as a tool to improve the reliability of financial reporting, for which, to guarantee investor confidence, the full financial health, including all material weaknesses a certain company has by year-end will be fully disclosed[5]. A recent example of the cost of a sub-standard reporting control was that of Wells Fargo, which led to the opening of two million dummy accounts, an infraction which cost the bank over $185 million in fines and inestimable damage to the Wells Fargo brand[7].

Wagner and Dittmar[8] discussed that most companies were surprised at the weaknesses SOX reviews and assessments exposed in their organizations. This was due to a lack of a more comprehensive view of the complete financial picture, which excluded potential weaknesses and patterns as such. To this token, the study of underlying internal control weaknesses and significant deficiencies within a company or organization cannot be overlooked; it enables the capture of significant patterns in a company data, and the implications of reporting such lapses and weaknesses will help those privy to the financial statements an opportunity to identify significant material weaknesses pertinent to them.

In this study, we develop machine learning algorithms to predict MWIC firms. Our objective is to answer the following questions: What is the best performing model as far as interpretation is the concern? Can we predict MWIC firms before their disclosure? What kind of dependency structures exists among the variables?

The rest of this paper is organized as follows: in section 2, data analytics methodology is introduced and the steps in the methodology are explained. In section 3, classification results are discussed. Lastly, a brief conclusion is provided in the final section.

In this study, a business analytics approach consisting of 3 main steps has been proposed. In the first step, the data is obtained from the COMPUSTAT database and the observations with missing values and outliers are eliminated. In the second step, one machine learning Bayesian belief network model and traditional statistical model logistic regression are employed to predict the firms with MWIC. In step 3, the best performing model in terms of performance metrics is determined and used to explore relationships among the variables as well as predicting firms with MWIC.

After the collection of the data, we removed outliers and missing values in the variables which in turn gives us the data with 605 observations and 23 variables. Moreover, to be able to fit the TAN model some steps are taken as the TAN model requires categorical variables to explore the relation between the response variable and the covariates[10]. In order to satisfy the categorical variable requirement, all numerical variables in the data must be categorized. However, categorization of the numeric variable, especially the variable with decimal places, causes to have as many categories as the number of observations in the data. When this situation exists as in our case, TAN model cannot find any structure to set a Bayesian belief network. In order to overcome this issue, we then first round the variables after which the TAN model is fit the data. In the table 1, the description of variables is given.

Table 1. Description of the Data

Classification models try to draw a conclusion from the observed values and then are used to predict a categorical target variable. In this study, we have used two classification methods called Logistic Regression and TAN. A brief description of these methods is given in the below sections.

The Logistic regression is a member of the generalized linear models (GLM) and a statistical method to model the existing relationship between a dichotomous response variable and a set of explanatory variables[11]. If the response variable has a binary outcome, GLM uses the logit link function to model log of an odds[12]. This special case of GLM is called logistic linear regression. The mathematical definition of the logistic regression is

is success probability of the response variable at the value of x,

are the coefficients of the logistic regression model.

and mathematical representation of the Bayesian Network chain rule is[15]:

In Bayesian Belief, Naive Bayes model can be used to learn existence Bayesian structure. However, Naive Bayes assumes independency among the predictors which is an unrealistic assumption in real life. This situation can be overcome by using the TAN model which relaxes independency assumption by augmenting a tree structure in which variables depend on a target variable and one non-target predictor variable. In order to embed dependency among the nodes, TAN model sets parent and child relation between the variables, where child node (variable) effect on the model decision is dependent on its parent[10].

To assess the model performance, four different performance metrics; sensitivity, specificity, accuracy and AUC are used. Definition of each metrics is as follows: sensitivity is the measure of the ability of the model in detecting MWIC firms when they in fact are MWIC (true-positive). In that vein, specificity is the measure of the model’s ability to detect not MWIC firms when they in fact are not MWIC (true-negative). Accuracy measures how many times the model correctly classifies the firms as an MWIC or not. Finally, AUC shows how the model performs in classification when different decision threshold is introduced. In this study, since we have a small sample size, accuracy and AUC metrics are used to evaluate the model performance.

It is customary to split data to validate the model performance[15–20]. However, the random splitting of the data can introduce a bias into the model outcomes. In order to circumvent the bias, researchers are inclined to used k-fold cross-validation technic[22]. The formula of the cross validation technic is as follows[18]:

Where CVA stands for cross-validation accuracy and performance measure for each fold and the number of fold used are represented by PM and k, respectively.

3.3 Exploring the Relation in the Bayesian Belief Network 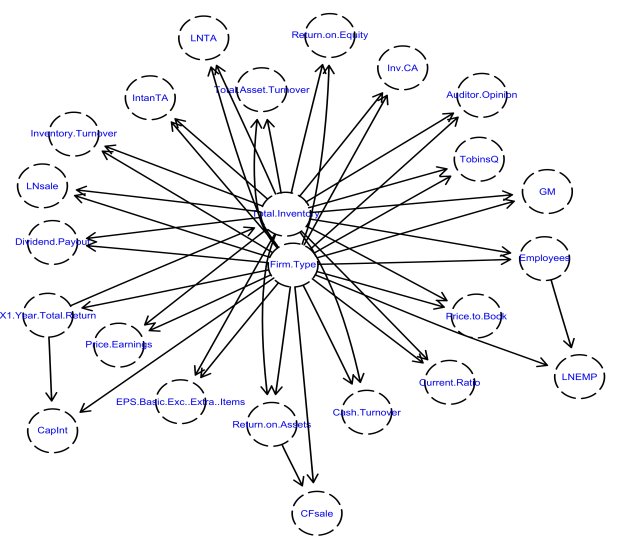 In this study, we have formulated a data mining methodology to provide investors, auditors and analysts with better accurate financial reports by enabling firms to utilize available resources more efficiently. Our study has contributed to the existing body of knowledge by; 1) applying machine learning models for predicting MWIC so that firms can avoid from bankruptcy and 2) displaying dependency and causality relationships among the predictors. Most importantly, the methodology can be used to influence decisions made by experts. These experts can evaluate the patterns and factors from the data mining methodology to make better informed decisions. This leads to a better a timely-red-flag indication for firms likely to declare MWIC in the future, which in turn can aid in reducing the bankruptcy rates for firms.

[4] “American Institute of Certified Public Accountants (AICPA). (2001). The Effect of Information Technology on the Auditor’s Consideration of Internal Control in a Financial Statement Audit.”

[5] PinerK, “PCAOB Release – An Audit of Internal Control Over Financial Reporting Performed in Conjunction with an Audit of Financial Statements,” 2002.

Accounting is the profession or activity of keeping financial records and statements. In business this usually includes bookkeeping, the preparation of financial statements including profit and loss, balance sheets and management accounts. Literature Review Regarding the Roles of Females in Accounting Globally The rate of progression of females to partner level in accounting firms is becoming an increasingly important topic within the ...