1.    What are the opportunities and challenges in regards to applying Blockchain technology to the financial industry?

When talking about the applications in financial industry, there are 4 main reasons to adopt. As a blockchain is a public ledger or distributed database of records of all transactions or digital events(Crosby et al. 2016). Firstly, blockchain technology makes history immutable. Once transactions have been recorded on blockchain, the information cannot be deleted or changed. The transactions in the public ledger are verified by participants. Secondly, the transparency and traceability of all transactions has been improved with the use of blockchain technology(Zheng et al. 2016).  All history can be traced on the blockchain. Thirdly, Bitcoin, the most popular example, the decentralized peer-to-peer digital currency used in blockchain technology. It is transferred via Internet, thus it reduces the transaction costs, which means it decrease the costs and procedures of exchanges(Crosby et al. 2016). Besides, there is no need for participants to require a trusted intermediary(Wüst & Gervais 2017). Fourthly, by using blockchain, it is to avoid fraud or access to confidential data. In this case, permissioned networks can restricted which has access to allowable areas and in what capacity (Chandran 2018).

On the contrary, there are also some challenges blockchain technology is facing. The first issue is about the capacity of blockchain, which indicates the maximum information storage in a blockchain and the speed of information processing by the network(Croman et al. 2016). The current blockchains are normally in low capacity. The second issue is about cybersecurity. This issue is worthy to address to pay more attention to avoid breach of private information, loss of assets. Cyber-attacks will lead to big losses to users according to the experiences from cryptocurrencies. The next potential concern is because all the transactions are through network, which is strongly depending on computers. Blockchain technology cannot work without power and computers. The last and the most important challenge is lack of regulation. Now the clear regulations are not adapted to facilitate adoption.

2.    Indicate one specific point on each of these two lines where the trend changes, and provide some reason(s) why this is the case.

The graph shows two exchange rates from 1 July 2013 and 1 July 2018. One is between VEF (Venezuelan Bolivar) and USD and the other one is between Bitcoin (BTC) and USD. 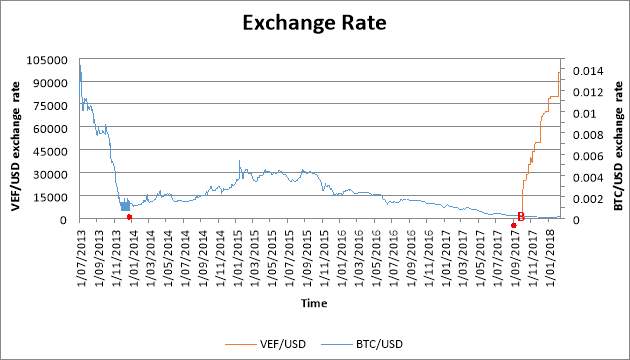 2.1 For the exchange rate of BTC/USD

It can been seen from the graph, during the period between November and December in 2013, from this point of time, the exchange rate of BTC/USD(A) is at the lowest value since July 2013. The price of Bitcoin has increased to $1,242 on 29 November 2013.

One of the reasons caused of the rise in November was that Bitcoin was approved by the Chinese Central Bank. Bitcoin went on a record, and all-time high of about $1,242 between 29th of November in 2013(Adeyanju 2017). The China-based Bitcoin exchange BTC China has surpassed Japan-based Mt Gox and Europe-based Bitstamp. The daily trade volume has reached 90,000 bitcoins and more than 200 million CNY. Therefore, China has been the largest bitcoin trading exchange by trace volume. Due to the increasing number of businesses has accepted bitcoin, such as some Chinese Internet companies, the demand for bitcoin has been particularly strong in China(BIDU), because many of them accepts currency(Spaven 2013). Also the acceptance of Chinese Central Bank indicated Bitcoin has received the support from officials from positive government regulation(Rooney 2013).

2.2 For the exchange rate of VEF/USD

For the period between February and March in 2018 shown from the graph, the exchange rate between VEF and USD (B) started to increase. One of the reason of the increase is because Venezuela has repeal portions of laws governing foreign exchange(Rosati 2018). From official document announced in January 26th 2018, its currency exchange control policy has been changed. The official allows auctions of foreign currency at the supplementary floating market exchange rate (DICOM), direct sales of foreign currency, and transactions involving the negotiation in local currency of securities denominated in foreign currency issued by private sector issuers(Publication 2018).

The new implementation in January reformed the country’s foreign exchange system. The exchange rate of VEF/USD experienced sudden and dramatic decrease since 5TH of February. On that day, the Central Bank of Venezuela, announced, there was a 99.6% devaluation. It means the exchange rate was from 10 Bs.F per USD to 25,000 Bs.F per USD(NEWS 2018).

From my calculation stated in the table below, the figures indicates VEF/USD has larger volatility than with BTC/USD.

Table. Volatility of BTC/USD and VEF/USD

The reasons of the larger volatility of VEF are 3. The first one is because of its Bizarre System of Exchange Rate, with a complex monetary arrangement that consists of four different exchange rates(Guest 2016).

Firstly, the economic uncertainty is high in Venezuela. The VEF has undergone periodic devaluations, but it is still overvalued at the “official” exchange rate. The overvaluation of the VEF lead to the situations that people would like to hold dollars rather than their own domestic currency(Bajpai 2018). Also in Venezuela, black market exits and the currency here is outside the government regulation.

Secondly, the reason of high inflation is because of the severe shortage of dollars. The dollars earned on oil exports are precious in Venezuela, because dollars are used to cover the import payment(Campoy 2016). For the people who want dollars, in this multi-layers exchange rate system, it supports arbitrage of the currency due to the different exchange rates for dollars in Venezuela. Then more and more people earn dollars in easy way because of the demand of dollars increases. The price of dollars in black market goes up. Thus inflation is pushes and the price of dollars will also goes up(Bajpai 2018).

4.    Do you agree with the statement below? Why and Why not?

Yes, I agree with this statement. Venezuela should adopt cryptocurrency such as Bitcoin as a national currency.

Firstly, if Venezuela uses cryptocurrency, such as Petro, it is expected to raise fund at relatively high speed to pay part of the country’s obligations claimed by Venezuelan government. With new cryptocurrency, it will help the country to resurrect its economy(Markman 2018).

Then, analyzing the domestic economic situation of Venezuela, the inflation in Venezuela was well above 10,000% in 2017. Additionally, its inflation is forecasted to reach 1,000,000% by the International Monetary Fund in the future(Nelson 2018). And this figure shows, Venezuela is one of the worst hyperinflationary crisis in modern society.  And people in this country are really struggling with the level of inflation. Cash is almost useless as a method of payment. This makes people hard to finish daily payment, as a result, some of them are opting to use bitcoin and other cryptocurrency because the massively devalued national currency(Bambrough 2018). Therefore, with the use of cryptocurrency, the monetary system can be stable as it can grapple with hyperinflation and other economic issues when the money supply are only able to grow at the rate that the cryptocurrency supply increases.

Besides, new cryptocurrencies are backed by gold, diamonds, oil, and other natural resources. It are able to help stabilize the national currency(Floyd 2018). Take an example of Bitcoin, it is not actually regulated by any entity nor backed by concrete assets. Cryptocurrencies only reflect very abrupt fluctuations that respond to a speculative logic.  With the new cryptocurrencies, because the value depends on the price of natural resource which backs it. In this case, the cryptocurrency it used will have a more stable price. It also means it will help to overcome US and EU sanctions(Estimulo 2018). Based on the pricing of the natural resources in the international market. The price of cryptocurrency will oscillate, but it will not have extreme spikes and tumbles(Estimulo 2018).

5.    Do you think Initial coin offering (ICO) is a Ponzi scheme? Why or why not?

ICO (Initial Coin Offering) has the similar concept with IPO (Initial Public Offering). It is talking in a limited period, company sells a predefined number of crypto coins or digital tokens to the public, typically in exchange for major cryptocurrencies (mainly Bitcoin and Ether)(PwC 2018).  It is an effective and novel method to raise capital for blockchain-based projects. A qualified, well rounded and capable team can solve a problem with an evident purpose with a sustainable and scalable business model.

Ponzi scheme is a form of an investment fraud, which is to pay profits to older investors by using funds obtained from new investors. Investors may be attracted by the high return from the product sales or other ways. They are deceived the profit is actually from other investors. As long as new investors are willing to contribute new funds, the Ponzi scheme can be continue. On the opposite side, it implodes when it are not able to find new investors.

Compare with the definitions of these terms, an ICO itself is not a Ponzi scheme. ICO is only a fundraising mechanism. However, the underlying business model could be a Ponzi scheme, which the startup is based on(Officer 2013). With many investments, there is high possibility for an ICO to be a Ponzi scheme. Take an example of Bitcoin, the most famous cryptocurrency. Bitcoin-based Ponzi schemes are proliferating. As in ICO project, the parties who benefit the most are the token-issuers and early token holders. These persons also have the largest power to control the early price of the token(Emptor. 2018). And ICOs are not formally regulated by any financial authority.  Therefore, based on these conditions, ICO is less likely to operate as a classic Ponzi schemes, but more likely to manipulate market and simple price after ICO.

Campoy, A 2016, These are the brutal emergency measures it would take to pull Venezuela back from total collapse right now2018, <https://qz.com/715230/these-are-the-brutal-emergency-measures-it-would-take-to-pull-venezuela-back-from-total-collapse-right-now/>.

Estimulo, VAE 2018, Advantages and Disadvantages of Crypto-Currencies: The Petro, <https://venezuelanalysis.com/analysis/13611>.

Publication 2018, Venezuela regulates new system for transactions in foreign currency as part of the exchange control regime, and unifies the official exchange rate at the DICOM exchange rate2018, <http://www.nortonrosefulbright.com/knowledge/publications/167197/venezuela-regulates-new-system-for-transactions-in-foreign-currency-as-part-of-the-exchange-control-regime-an>.

Review Text Processing and Information Production Practice in a Business

Summary   The Network Services Platform (NSP) is a software product for IP/MPLS management under which the Network Functions Manager for Packet (NFM-P) is an important module. It enables end-to-en...

DESIGNING AN ONLINE BOOK CLUB INTERFACE FOR PERSONS WITH INTELLECTUAL DISABILITIES Table of Figures Abstract List of Definitions Introduction The art of storytelling Reading and People with Intelle...