Metastable δ phase in super-alloy Inconel 718 is examined by means of characterization, precipitation and dissolution. Recent time-temperature-transformation diagram as well as the liquidous/solidus temperatures of the precipitations are provided. Equilibrium state of the δ phase from the literature along with the morphological scanning electron microscopy images are included. A model from the literature which is developed for predicting the transformation curve of δ phase is provided including the matching data from the experiments. Findings and key points of the studies for δ phase in Inconel 718 are given in the summary section latterly.

In the last decade, the attention the Ni-based super-alloys attracted has grown incredibly [1]. Among them, owing to the contribution of their superior properties specifically high temperature (up to 700oC) oxidation resistance, today Inconel 718 are the most widely used Ni-based super-alloy in aerospace industry [2]. During the operation conditions, as a result of extensive heat and pressure cycles that are applying to the alloy structure, the microstructural characteristics of Inconel 718 may undergo some transformations and noticeably lower the lifetime of the alloy. In this literature review occurrence of δ phase is examined closer in terms of its characterization, precipitation and dissolution into the matrix.

Characterization of the equilibrium state of δ phase

The typical chemical composition of Inconel 718 is given in Table 1.

Characterization of the equilibrium state of δ phase by disregarding impurity elements and atoms trapped in γ“ precipitates can be simply given as [4]:

is the activity of

. With the assumption of ideal behavior, the equilibrium conditions are given by [4]:

is the free enthalpy of the formation of δ phase from solid solution. The above equation is used to determine the content of δ phase in regard to the temperature along with δ solvus for any chemical composition [4].

planes, which is correspondingly the habit plane of the δ phase as it was deliberated by Sundararaman et al. [7]. 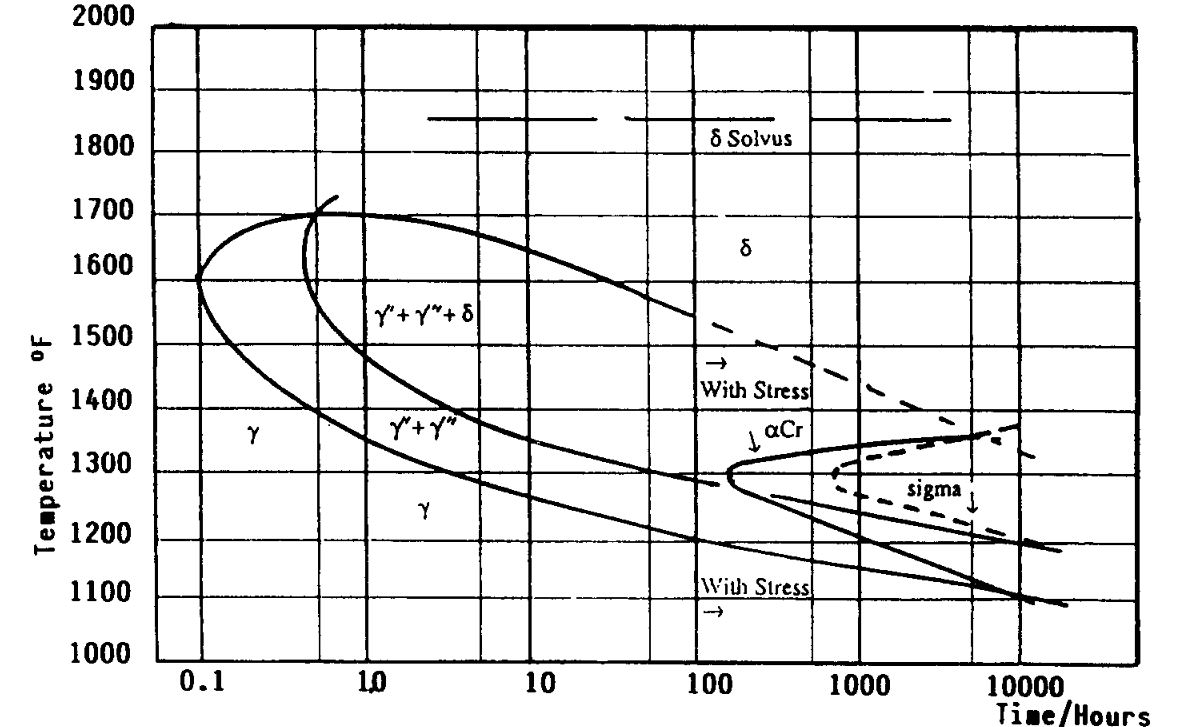 The major precipitates in Inconel 718 are metastable body-centered-tetragonal (BCT) coherent γ“ phase and face-centered-cubic (FCC) coherent γ` phase which both are the main strengthening phases precipitating in the austenitic matrix [2]. Their characteristic temperatures determined by DTA experiments among different manufacturing types of Inconel 718 are given in Table 2 below.

In equilibrium conditions the metastable γ“ phase turns into stable orthorhombic Ni3Nb based incoherent δ phase [1, 10, 11]. Transformation of δ from γ“ occurs initially at grain boundaries by cellular reaction. δ phase mainly precipitates heterogeneously due to the different structure regarding FCC matrix [12]. The solvus of the δ phase varies between 990 oC and 1020 oC depending on the Nb composition [5, 11]. At temperatures below solvus, δ phase precipitates through γ“ precipitation whereas at higher temperatures directly from the austenitic matrix [12, 13]. Such transformation may interfere with the alloy properties due to formation kinetics of δ phase. It has been shown that [14, 15] δ phase may develop in the alloy with round shape (see Figure 3) during processing or in service. In the literature, there are numerous studies that take the strengthening effect of γ“ and γ` phases along with toughening effect of δ phase on microstructure and mechanical properties of Inconel 718 parts. Although γ“ precipitation strengthens the alloy, δ phase has significance on stabilization of the grain size [4, 11] as well as improving the high temperature stress value of the super-alloy 718 [6]. Besides, due to its morphology, δ phase does not further increase the alloy’s strength. In fact, it causes it to decrease by depleting γ“ [5]. Essentially, taking control over the δ phase specifically at grain boundaries is believed to be the key point in parts with better mechanical properties [16]. Thus, controlling δ precipitation makes it possible to control microstructural properties to meet the industrial demands for Inconel 718.

, time needed to reach the above-defined value. For δ phase the value of

where, the units for

is hours and for

is Celsius. The curve corresponding the equation above can be seen in Figure 2. 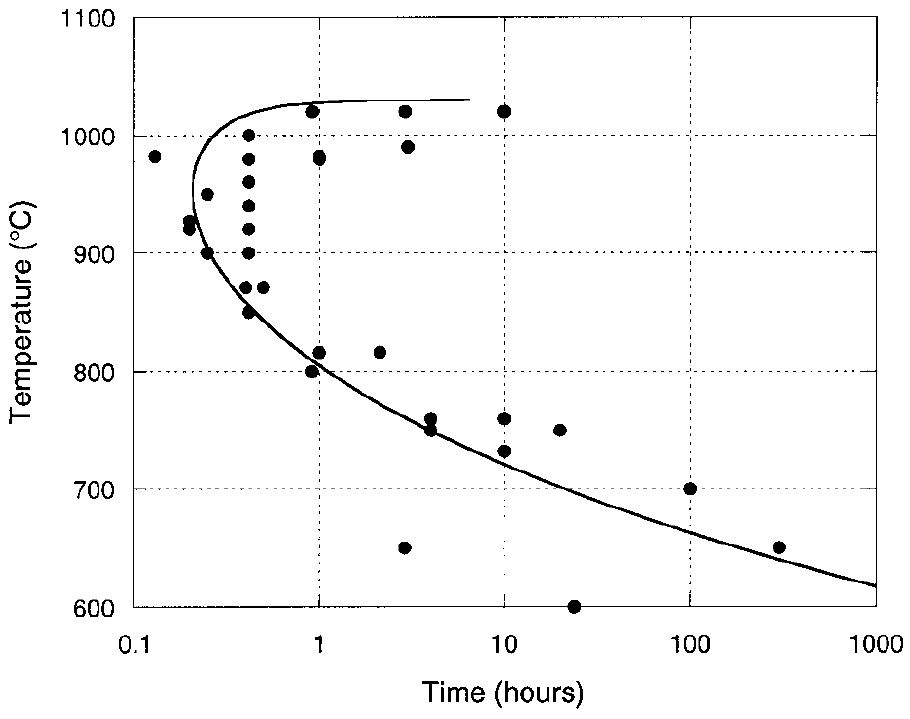 Figure 2. Diagram showing relationship between time and aging temperature for initial precipitation of δ phase: line corresponds to the Equation (4) [11].

It is seen from Figure 2 that curve drawn by using Equation (4) represents majority of the experimental data generated by Beaubois et al. [11]. 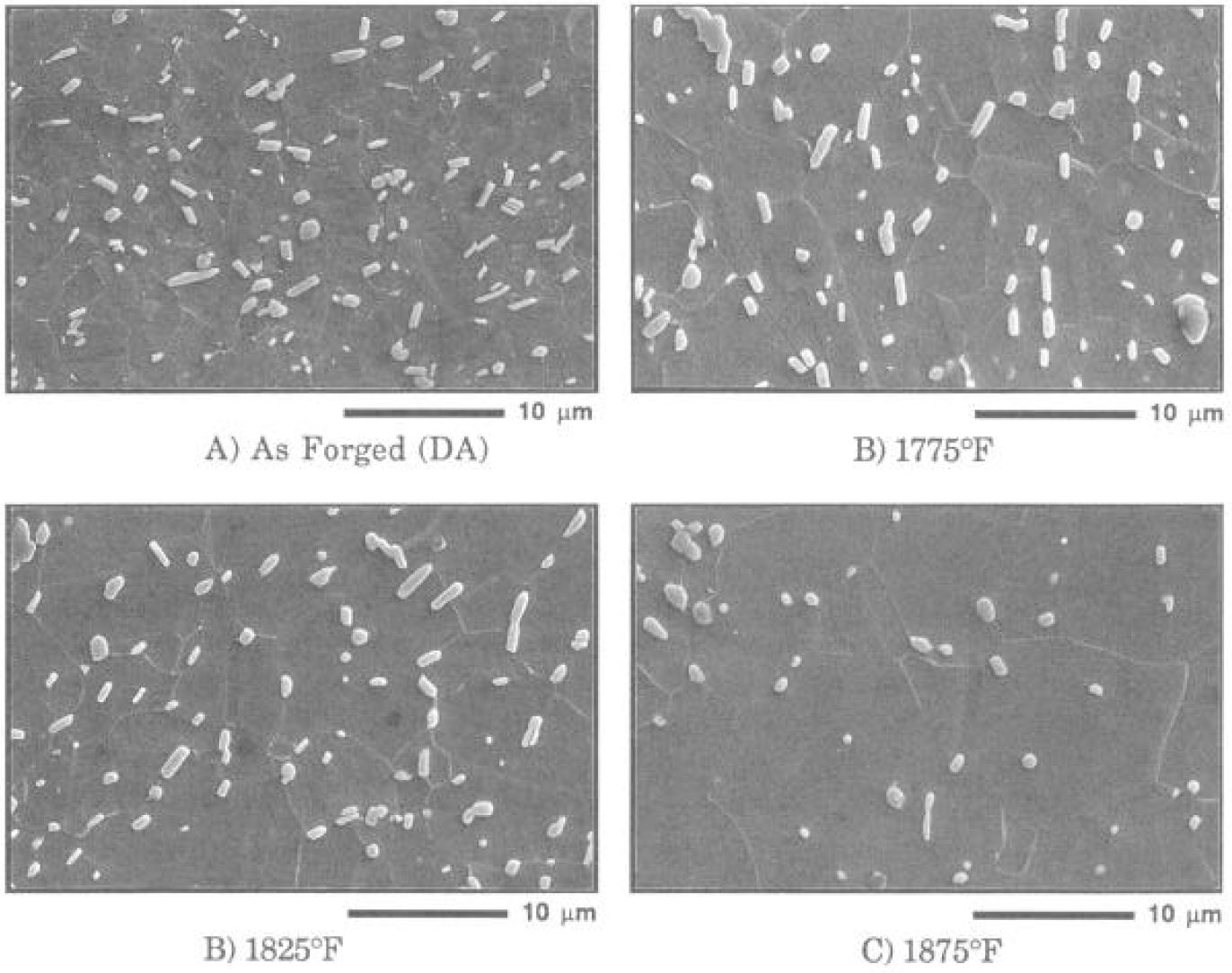 The dissolution kinetics of δ phase

The dissolution kinetics of δ phase in Inconel 718 is investigated by Cai et al. [16]. Change in the amount of δ phase in Inconel 718 can be seen in Figure 4. It is clear from Figure 4 that δ phase amount decreases with increasing holding time at all three given temperatures. It is worth noting that δ phase does not fully dissolve into the matrix at 980 oC rather follows no relationship following some certain holding time. 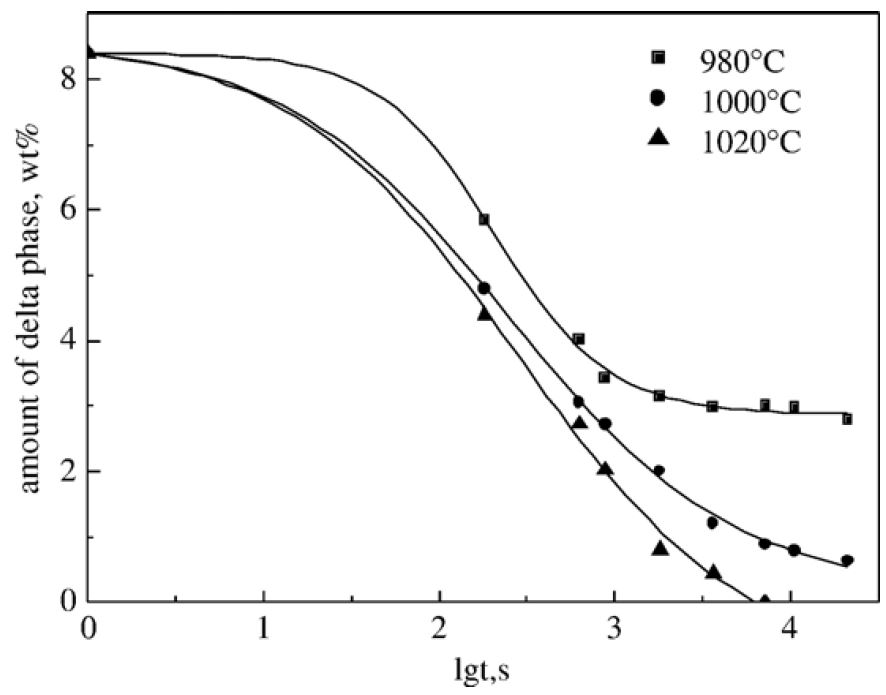 across the phase boundary is given by [16]:

where, M is the migration rate. In longer-range diffusional process, the flux is dominated by the cubic diffusion coefficient and concentration gradient among the phase boundary and the austenitic matrix and is given by [16]:

are frequency factor and activation energy, respectively. The migration rate of diffusional process atoms migrate from one side of the phase boundary alongside δ phase to the other side alongside the austenitic matrix relies on the accommodation probability which can also be defined as carrying factor [16]. The δ phase and austenitic matrix boundary is reported to be incoherent which approximates the carrying factor to unity. The slowest step is going to act as dominating process which in this case would be the longer-range diffusion process [16].

8H. Eiselstein, “Metallurgy of a columbium-hardened nickel-chromium-iron alloy”, in Advances in the Technology of Stainless Steels and Related Alloys. 1965, ASTM International.

Mechanics is the area that focuses on motion, and how different forces can produce motion. When an object has forced applied to it, the original position of the object will change.

Lower Carbon Emissions from Motor Vehicles for the Future

Introduction to a dissertation involving the simulation and practical experiment of hard materials to calculate their elasticity and phase velocity without harming or effecting the materials usefulness....