The International Union of Pure and Applied Chemistry (IUPAC) states that the name “lanthanides” (which originates from the Greek word lanthaneien meaning “lying hidden”), include the elements Cerium to Lutetium, while “lanthanoids” should be used when referring to the whole series (including Lanthanum). However, the name “lanthanoids” is rarely used, and Lanthanum is commonly included when talking about lanthanides.(1)(2) The lanthanides are also commonly known as the “rare earth metals”, a name that reflects the difficulties faced during their extraction from the mineral ores they were found, which lead to the belief that they were scarce.(3) However, it is now known that lanthanides are not rare at all and even the least abundant of the lanthanides, thulium, is more abundant in the Earth’s crust than iodine, mercury or arsenic.(4)

The discovery of the first lanthanide commenced in 1787 with the finding of a new mineral by an artillery lieutenant of the Swedish army, Carl Axel Arrhenius, in a quarry near Ytterby, which he called “Ytterby’s tungsten” (“tug sten” means “heavy stone” in Swedish). In 1794 Johan Cadolin, while analysing this mineral, identified a new element that he called yttrium. The next 15 rare earth elements were discovered between 1803 and 1907 by different chemists, while the last one, artificial Pm, was not synthesised until 1947.(2) This slow discovery process, which took over a century, can be attributed to the similar chemical and physical properties shared between the lanthanides, the fact that they were isolated as oxides or “earths” of the elements, and because of the difficult methods of purification that were required for their isolation.(3)

Light played a big role in the discovery of the lanthanides and, in turn, many technologies related to light emission, such as lasers, television and computer plasma displays, optical fibres and light-emitting diodes, currently rely on lanthanides (Figure 1).(1),(4) From the 1980s, lanthanides started to become of great importance as bio-imaging tools, and currently they are commonly used as contrast agents in Magnetic Resonance Imaging (MRI) for medical diagnosis purposes, while a huge research effort is focused on the development of lanthanide-containing luminescent probes for biomedical analysis and cell imaging.

Due to its ability to reach complex molecular structures within cells, while providing fast and easy to interpret information, light is a commonly used tool in biomedical applications.(1)

The term Luminescence (from Latin lumen = light) was first coined by the physicist Eilhardt Wiedemann in 1888 which described it as “all those phenomena of light which are not solely conditioned by the rise in temperature” as opposed to incandescence.(5)

In this project, we are most interested in the fluorescent emission of lanthanide ions for their use in biomedical diagnosis. Due to the cell toxicity exhibited by free lanthanide ions, a ligand must be designed that is able to form a stable complex with these metal ions preventing cell toxicity. Furthermore, this ligand must be able to modify the luminescent properties of the lanthanide ion, with the aim to use it as a molecular switch to visualise cell processes indicative of disease.

The first publication related to the use of lanthanides’ fluorescence in bio-imaging was published in 1983 by Siitar, H. et.al.,(7) who undertook an immunoassay of hepatitis B surface antigen using a lanthanide chelate as a fluorescent label in time-gated fluorescence.  Since then, fluorescent lanthanides complexes have been used for bioimaging of a wide range of biologically relevant molecules, such as proteins, enzymes, nucleic acid, etc.(8)

In order to be able to use lanthanides in bioimaging, it is necessary to understand the physical properties that give rise to their fluorescence and also, how these properties can be optimised in order to make probes of high cellular sensitivity towards changes at the molecular level during disease. The ligand in the lanthanide complex will play a key role, not only in providing a stable framework for the toxic lanthanide but also to optimise and modify its luminescent properties. Therefore, in the following sections, the physical properties of lanthanides and the description of the characteristics of a potentially optimal ligand will be described.

The fluorescent properties of lanthanides that enable their use for biomedical applications can be explained in terms of the electron configuration of their derived ions, which exist in their trivalent state (Ln3+) in aqueous solutions.(1) Hence, the ground state configuration of Ln3+ ions is [Xe]4fn, n = 0 – 14, which renders their valence electrons located in 4f orbitals. These 4f orbitals are shielded by the more radial expanded 5s25p6 subshells, making them “inner orbitals”, and is this inner character of the 4f orbitals what gives lanthanides their optimal chemical and spectroscopic properties that make them useful as bioimaging tools.(6)

There are three types of electronic transitions involving lanthanide ions in the presence of a ligand: intra-configurational 4f–4f transitions, 4f–5d transitions, and charge-transfer transitions (metal-to-ligand, MLCT or ligand-to-metal, LMCT), however the most common electronic transition in Ln3+ when it is irradiated with light, is the transitions between 4f orbitals.(1)(6)The inner nature of the 4f orbitals means that they do not participate in bonding with surrounding ligands during the formation of coordination complexes (the covalency of a Ln3+–ligand bond is at most 5–7%), and bonds between Ln3+ and the ligands are mainly electrostatic.(6) As a consequence, 4f–4f transitions result in sharp emission lines in the lanthanides spectra. This is due to the fact that the promotion of an electron into a 4f orbital of higher energy does not perturb much the binding pattern in the molecules and, therefore, the internuclear distances remain almost the same in the excited state, which generates narrow bands and very small Stokes’ shifts (where the Stokes’shift is the difference between the absorption and emission wavelengths).(6)On the other hand, organic chromophores have broad emission bands that are due to the lengthening of the chemical bonds during excitation, which also results in larger Stokes’ shifts (Figure 2).(6)

Therefore, this limits the utility of lanthanides’ direct excitation, and sensitisation of the lanthanide ion is required.

A widely established method to sensitise lanthanide’s absorption, commonly known as the antenna effect, was firstly observed by Weissman in 1942 when he obtained the excitation of Eu3+ through indirect irradiation of surrounding UV-absorbing anions.(9) Nowadays, the most commonly used antennas are organic chromophores, which are good energy harvesters (with absorption coefficients ε ≈ 104–105 M−1 cm−1 for most of the organic chromophores in the UV region),(4) allowing a large electronic population of the lanthanide excited state, which leads to strong luminescence signals.(9) In Figure 4. a Jablonski diagram is used to explain the migration paths in the antenna effect.

The antenna effect follows the next steps. First, the antenna is irradiated with light of suitable wavelength (matching the energy gap between the antenna’s electronic ground state and its first excited state), populating the vibrational levels of its lowest-lying singlet excited state (S1). Vibrational relaxation to S1 is followed by subsequent intersystem crossing (ISC) to the antenna’s triplet level (T1) (a spin-forbidden process mediated by a number of processes including spin–orbit coupling and heavy atom effects), finally followed by the energy transfer process (ET) to the Ln3+ ion. 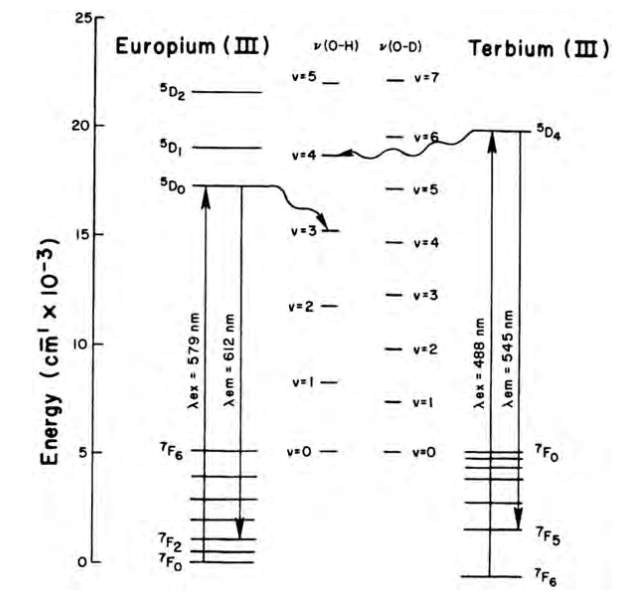 Figure 5. Deactivation of europium and terbium excited states by energy

In the late 1970s, Horrocks et.al. developed a method that determines the number water molecules (q, ±0.5) directly bound to the lanthanide ion, demonstrating that the lifetime of Eu and Tb is directly related to the number of OH oscillators in the first coordinating sphere of the ions.(11)

As an example of the effect of OH oscillators in the first coordinating sphere of lanthanides, Figure 6 and Table 1 show ligand L, developed by Yang et.al.(12)and the effect of methanol and water to the quantum yield and lifetimes of Eu and Tb complexes.

Table 1. The effect of OH oscillators in the quantum yield (Ф) and luminescence lifetime (τ) of Eu3+ and Tb3+ complexes with L

Table 2. Photophysical data of Eu3+ complexes with L1, L2, L3, showing the effect of the bridge in the quantum yield and luminescent lifetime of the complexes.(14)

It has also been found that the distance between the antenna and the metal centre is also of importance since it has been seen that both the separation and the orientation of the chromophore influences the quantum yields of europium complexes.(8)

The use of the antenna effect to populate the excited states of the lanthanide ion has also another consequence of great utility for bioimaging agents, which is the long Stokes’ shift obtained through this mechanism. The difference between the absorption wavelength by the antenna and the emission wavelengths by the lanthanide are greater than when just using organic chromophores as bio-luminescent probes.(10) The benefits of long Stokes’ shifts in bioimaging will be discussed in the following section.

The biological medium that these bioimaging probes need to be active in is dominated by organic chromophores present in proteins that are able to emit fluorescent light in the UV-visible spectrum, which is known as autofluorescence. The long Stokes’ shifts that result of the sensitised Ln3+-complexes means that the emission observed from the Ln3+ ion will be of longer wavelengths than those emitted by the organic chromophores in the biological medium, which combined with the characteristically sharp spectral lines of Ln3+, makes separation from autofluorescence much easier than when using organic chromophores as fluorescent markers.

Furthermore, Laporte selection rules not only affect the absorption of lanthanides but also their emission. Once the lanthanide’s excited state is populated, the rules for radiative de-excitation are the same, whether the population has been through direct excitation or through the antenna effect, and the probability remains low. This results in long-lived excited states in lanthanide ions and in their observed long lifetimes: visible-emitting Eu and Tb complexes have lifetimes in the millisecond scale and NIR-emitting lanthanides such as Yb and Nd in the microsecond scale. The organic chromophores present in the biological medium have shorter lifetimes (in the nanosecond scale) and this allows the use of time-resolved or time-gated techniques for the detection of lanthanides luminescence. In this technique, a delay between the excitation of the sample and the acquisition of the emitted luminescent signal allows the vanishing of the shorter-lived autofluorescent signals from the medium before the emission of the Ln3+-complex is observed.(11)

Due to their long lifetimes, Eu and Tb complexes have been the most studied for biological applications. However, in the last decade, there has been an increase of the study of NIR-emitting lanthanides, despite their shorter lifetimes. This is because NIR has better tissue penetration than light of shorter wavelengths and antennas that absorb light of lower energies can be used.(8)

Therefore, in order to develop a lanthanide-based bioimaging agent, the main physical parameters that define the luminescent properties of lanthanides need to be understood and optimised. In particular, the understanding of the antenna effect mechanism is useful when choosing the adequate ligand to obtain a stable and highly luminescent lanthanide complex for cell imaging.

An Investigation of Intracellular Trafficking

Functions and Applications of miRNA and miRNA Sponge Technology

This review outlines current understanding regarding the generation, natural functions and applications of this class of RNA....

Introduction to Special Study Project Malaria is a debilitating and life-threatening disease that affects some 91 countries worldwide. This protozoan infection caused 429,000 deaths in 2015 alone, of...