For gains in health, patients at risk of CVD are recommended to exercise habitually at intensities oscillating from 40-90% of

To date, research has demonstrated that HIIT training increases

V̇O2max (Helgerud et al., 2007), reduces total body mass (Perry, Heigenhauser, Bonen & Spriet, 2008; Tjønna et al., 2008) and subcutaneous fat (Boutcher, 2010), as well as insulin sensitivity (Trapp, Chisholm, Freund & Boutcher, 2008) compared to CE. Similarly, past research has explored the effects of ageing on AIx and PWV (Avolio et al., 1985; Smulyan, Asmar, Rudnicki, London & Safar, 2001; Mitchell et al., 2004). However, minimal research has been conducted on the acute effects of different exercise modalities on AS through AIx and PWV (Hanssen et al., 2015). Therefore, this study will endeavour to investigate the acute effects of HIIT versus moderate-intensity CE on vascular health. The hypotheses for this study are:

H0 – There will be no significant differences in AIx or AIx(75) after completing a HIIT versus moderate-intensity CE.

H1 – There will be significant differences in AIx or AIx(75) after completing a HIIT versus moderate-intensity CE.

H0 – There will be no significant differences in PWV after completing a HIIT versus moderate-intensity CE.

H2 – There will be significant differences in PWV after completing a HIIT versus moderate-intensity CE.

Participants: Six healthy participants, 4 male and 2 female (age: 23±2.13 years; height: 1.73±17.11 cm; body mass: 76.53±0.09 kg), free of injury and illness volunteered to take part within the study. All participant were actively taking part in vigorous sport and exercise through competing in university and club sports in addition to their own recreational time. Before any testing measures commenced all the participants were required to complete a Physical Activity Readiness Questionnaire (PAR-Q) alongside providing written consent. During this time, the participant’s resting blood pressure, height and weight were all recorded to ensure their suitability and safety for testing. The current study was approved by the University of Winchester Ethics Committee of the Department of Sport and Exercise.

Experimental Design: This study was a non-randomised cross-over design. To start the participants rested in a supine position for 15-minutes (Nitzsche et al., 2016; Milatz, Ketelhut & Ketelhut, 2017), after which, baseline pulse wave analysis (PWA) and carotid-femoral PWV were performed on the left-side using a SphygmoCor (AtCor Medical, SphygmoCor, Australia). Baseline measures were recorded, alongside a resting blood lactate. While supine the participant was fitted with a face mask, where 1-minute of

V̇O2 was collected using a cortex metalyzer (Metalyzer 3B, Germany). Post-rest, the participant was equipped with a HR monitor (Polar, T31c Transmitter, England) and the cycle ergometer (Monark, 874 E, Sweden) was set to the correct position and recorded. The participants took part in a 2-minute warm up at 70RPM before the test commenced.

V̇O2 was collected using the metalyzer throughout. The participants HR and RPE was recorded at the end of each high-intensity stint, while blood lactate was obtained after the first and fifth high-intensity exercise bout, plus immediately post-exercise. Post-exercise the participants return to a supine position where PWA and PWV measures were repeated on the left-side at 1-minute, 10-minute and 20-minutes post-exercise (Tordi, Mourot, Colin & Regnard, 2010). At the same time the participants blood lactate samples were analysed using a Biosen (C-Line, EKF Diagnostic, UK) and average peak power was recorded from all five 10-second high-intensity phases from the cycle ergometer test software (Monark, Anaerobic Test Software, Sweden).

The CE took place within two weeks of the HIIT, in between each participant’s CE time and cycling resistance was calculated to the same total energy expenditure (TEE) produced during their HIIT condition (Fletcher, Froelicher, Hartley, Haskell & Pollock, 1990; American College of Sports Medicine, 2013), thus, each participant exercised for different times, at different resistance. Pre-exercise PWA and PWV protocol was the same as the HIIT condition. Each participant’s exercise time was broken down into 5 equal sections, at the end of each section the participants HR and RPE was recorded, while blood lactate was obtained after the first and fifth sections, plus 1-minute post-exercise. Post-exercise PWA and PWV protocol was similary to the HIIT condition.

Data Analysis: To estimate the caloric expenditure from the HIIT exercise condition data, the equation [kcal/minute=

METS*3.5*body weight(kg)200], published by the American Heart Association (Fletcher et al., 1990) and highlighted in succeeding ACMS guidelines (American College of Sports Medicine, 2013), was used (Humphrey, 2006; MacArdle et al., 2010). For example, the primary step is to calculate average energy expenditure (AEE) during HIIT, to achieve this MET cost of exercise must be calculated by dividing overall average

2.7ml/kg/min3.5=7.86ml/kg/min]. This is then added to the original equation to achieve the participants kcal/minute [

The next step follows the same format, though substituting overall average

Statistical Analysis: All data has been articulated as mean ± standard deviation (SD). All variables were put through a Shapiro-Wilk normality tests to determine normal distribution. Accordingly, a two-way repeated measure analysis of variance (ANOVA), was conducted for statistical evaluation with the factors ‘test’ and ‘time’ using SPSS (Version 22, SPSS Inc., Chicago). Significance was accepted at the level of p<0.05. Mauchly’s test of sphericity was completed to determine whether the assumption of sphericity was violated or not. Where significance was established, Bonferroni-corrected post-hoc analysis was undertaken as outlined by Vincent & Weir (2012). Effect sizes were calculated using the equation,

The means and SD of AIx and AIx(75) between the two exercise conditions are represented in figure 1 and table 2, respectively. A two-way repeated measures ANOVA conducted on the AIx data indicated there to be no significant interaction (F(3,15)=1.414, p=.278, 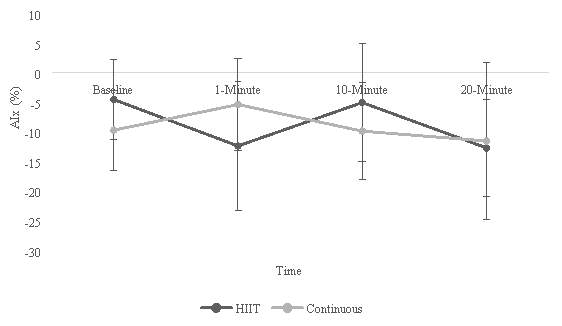 Figure 1: Comparison of AIx means and SD between HIIT and CE.

=.100) between the two exercise conditions and time. In terms of differences between HITT and CE conditions there was also no significance found (F(1,5)=.462, p=.543,

=.376). Bonferroni-corrected post-hoc analysis revealed there to be a significant difference (p=.007) in AIx(75) between baseline and 1-minute post-exercise as well as significance (p=.013) demonstrated between time 10-minutes and 20-minutes rost-exercise.

Figure 2: Comparison of AIx(75) means and SD between HIIT and CE. 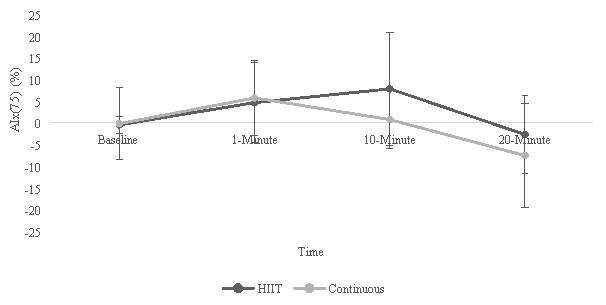 Figure 3 represents the means and SD of PWV between the HIIT and CE conditions. There were no statistically significant interactions seen between the two conditions and the times of testing (F(3,12)=1.407, p=.289,

=.260). Likewise, the two-way repeated measures ANOVA reported there to be no statistically significant differences between HIIT and CE conditions (F(1,4)=1.814, p=.249, 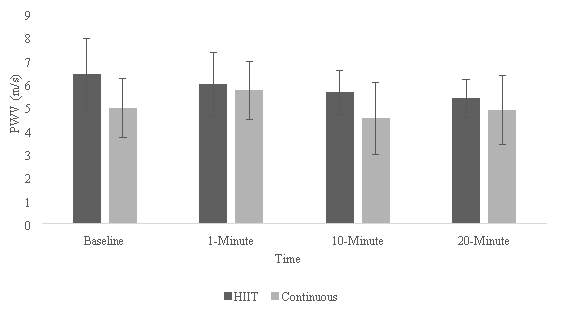 Figure 3: Comparison of PWV means and SD between HIIT and CE.

Though there was absence of significance, there are indications of acute decreases in pulse wave pressure post-exercise. This matches the findings of Heffernan et al. (2007) and Dischl et al. (2011) who reported significantly lower AIx with a delay of ~15-20 minutes’ post-exercise. They also discovered that AIx(75) was significantly enlarged directly post-exercise with a steady decline equal, or lower than baseline within 30 minutes (Heffernan et al., 2007; Dischl et al., 2011). This was concurrent with that seen in CE with a much lower drop compared to baseline in AS measured through AIx(75), however, HIIT AIx(75) peaked at 10-minutes and remained further increased during recovery (Heffernan et al., 2007). After extended comprehensive exercise, AIx(75) has been reported to be decreased within 15-minutes post-exercise (Vlachopoulo et al., 2010; Pressler et al., 2011). This insinuates that HR amended AIx(75) and AIx have comparable time courses during post-exercise recovery but with postponed reaction patterns, dependent on duration and intensity of exercise (Hanssen et al., 2015). As such, amending AIx for HR, the current study discovered roughly identical time courses for AIx(75) compared to AIx (Hanssen et al., 2015), especially for the CE condition.

Statistical analysis revealed a non-significant interaction between condition and time when investigating PWV. Additionally, there were no significant differences between conditions, however, large effect sizes were presented for both results according to Cohen’s (1988) effect size categories, tallying the trend that significance could have been possible with an increased sample. Furthermore, there was a significant difference seen in time, thus, the main observation was that exercise, independent of the modalities, decrease PWV. These findings conflict those of Guimaraes et al. (2010) who demonstrated that AS was improved only during HIIT as calculated by a decrease in PWV, advocating that level of disease and difference in exercise intensity could be the answer to inconsistent results (Guimaraes et al., 2010).

This study, however, ran parallel to Ranadive et al. (2012) and Siasos et al. (2016) who discovered no significant differences in PWV relative to baseline measurements in either HIIT or CE conditions. Although, Kingwell et al., (1997) showed a decrease in PWV after a single session of moderate CE, within 30-minutes. Within this study PWV was measured up to 20-minutes post-exercise, as such, these contradictory results could be credited to the differing protocols (Siasos et al. 2016).

The mechanisms linked to AS are endothelial dysfunction, hyperplasia and hypertrophy of smooth muscle cells, abasement of the elastic matrix and upsurge in collagen content (Benetos et al., 2002; Zieman, Melenovsky & Kass, 2005). However, Peng, Haldar, Deshpande, Irani and Kass’s (2003) experimental study established that the degree of wall swelling stimulated by shear stress affects the alteration in A through mechano-biomechical signalling that can be detrimental to vasorelaxation. Consequently, increase in duration or intensity of exercise should be essential to help significantly improve AS in CVD patients (Guimaraes et al., 2010). Nevertheless, this was not evident in this investigation and could be explained by the sample group used. In healthy participants, with less stiffness of the arteries, a short duration of low intensity CE could be satisfactory to develop arterial function (Cameron & Dart, 1994; Tanaka et al., 2000), thus, could explain why no significant differences were seen between conditions but were seen in time for AS, as measured through PWV.

As demonstrated by the effect sizes throughout this investigation (Cohen, 1988; Cohen, 1992) it could be propositioned that increase in size of sample could have resulted in statistically significant results for the variables measured in the current study. An additional limitation to this study comes from the protocol, it could be argued that true HIIT was not achieved, instead high volume interval training was attained…..

In summary, the current study endeavoured to investigate the acute effects of HIIT versus moderate intensity CE on vascular health. Although there were no significance interactions or differences between conditions for AIx, AIx(75) and PWV, the results discovered support the notion that exercise, by-and-large, can help in the decrease AS. As such, the results presented speculate that with greater statistical power through sample size, HIIT has the potential to accomplish, although less noticeable, acute effects on AS. However, the negatives outweigh the positives

Based on the aforementioned, the two null hypotheses presented can be accepted.

H0 – There will be no significant differences in AIx or AIx(75) after completing a HIIT versus moderate intensity CE.

H0 – There will be no significant differences in PWV after completing a HIIT versus moderate intensity CE.

Additional mechanisms speculated to be involved in the unbiased effects of exercise on central stiffening of the arteries are the lessening of endothelon-1 release and increased volumes of circulating catecholamine (Wray et al., 2007).

Fitness is the physical condition of being fit and healthy. Being physically fit relates to an ability to perform physical or sporty activities, cardiorespiratory endurance, and muscular strength. Fitness is achieved through exercise and nutrition. Education and Activities to Improve Health and Quality of Life

The main purpose of this program is to improve the health and quality of life through educational and physical activities as well as healthy eating....