1. Compare and contrast the biology, epidemiology and pathologies caused by Tenia Solium and Onchocerca volvulus. Provide a critical and comparative account of preventive measures and therapies currently used for the treatment of symptomatic and asymptomatic infections.

Tenia Solium and Onchocerca Volvulus are both parasites. A parasite is an organism which live inside or on a host organism while benefitting from deriving nutrients at the expense of the host organism; this is a type of symbiotic relationship. Tenia Solium and Onchocerca Volvulus are both nematodes which infect a human host in their larval stages. In this essay, the similarities and differences in the biology, epidemiology and pathologies will be further explored.

The adult Tenia Solium, also known as pork tapeworm, is of the Cestoda class. It is the cause of two conditions, taeniasis and two types of cysticercosis which mostly affects developing regions of the world, affecting around 2.5 million people (Aung and Spelman, 2016). They are 2-7m in length and have a large structure (the strobila) which consists of an array of many reproductive organs (proglottids); therefore, they are known as polyzoic. In Tenia Solium, new proglottids are progressively being produced in a mechanism called strobilation in which segments move in the posterior direction and a new segment replaces it  (Larry S. Roberts, John Janovy JR, Gerald D. Schmidt, 2013). 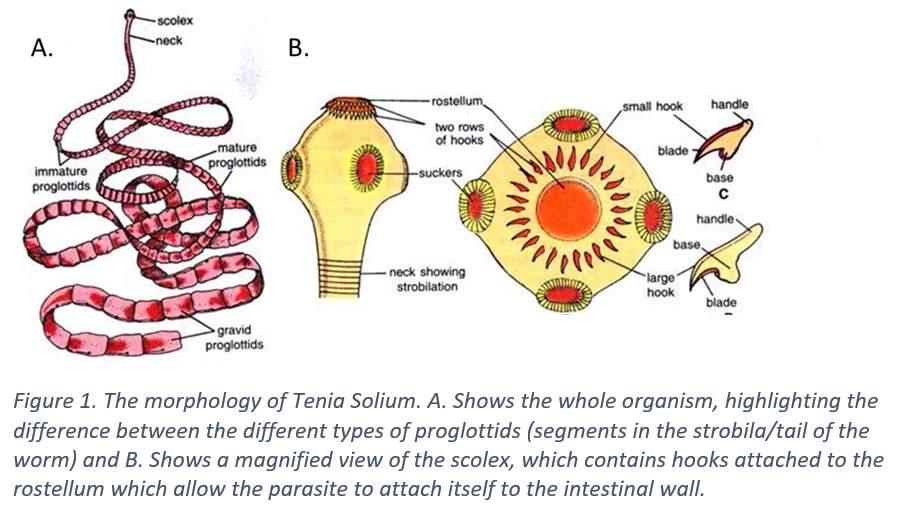 Tenia Solium starts off as eggs or gravid proglottids in faeces and are passed into the environment. Infection of human and pigs both starts at the larval stage. Embryonated eggs are ingested by pigs and hatch and penetrate the intestinal wall and migrate to the cardiac and skeletal muscle where they develop into cysticerci (Timothy M. Goater, Cameron P. Goater, 2013); this occurs as a result of exposure to gastric acid, At this stage, the scolex is inverted in a sac; when the sac reacts with bile, it evaginates and attaches itself to the mucosa of the small intestine (Garcia et al., 2014). Oncospheres migrate from the gastrointestinal tract to the vascular compartment (the ileum) (DeGiorgio et al., 2004). When raw or uncooked infected meat is ingested by humans, the scolex of the cysticerci attaches itself to the intestinal wall; here, it develops into an adult worm. One adult tapeworm produces less than 1000 proglottids, each containing a functioning reproductive system. These proglottids produce approximately 50,000 eggs which are passed on in faeces.

Onchocerca Volvulus is a parasite from the Secernentea class which causes onchocerciasis, more commonly known as River Blindness, as well as severe skin disease. Female worms are typically 230-500mm in length and 250-450µm wide whereas males measure approximately 16-42mm in length and are 125-200µm wide. Its morphology is very different to that of Tenia Solium; there are no clear segments in its structure and there are four papillae surrounding the mouth. Furthermore, the posterior end consists of two spicules in male worms whereas in female worms, the vulva is located near the posterior end of the oesophagus(Larry S. Roberts, John Janovy JR, Gerald D. Schmidt, 2013).

Onchocerca Volvulus, in contrast to Tenia Solium, is transmitted to humans from humans, using Simulium Damnosum (blackfly) as the vector (‘WHO | Life-cycle of Onchocerca volvulus’, 2012). When blackflies land on a human host and suck blood, larvae (at the L3 infective stage) enter into the wound left by the bite. In the human, the L3 larvae become adult filariae (worms) following two moults (Hall and Pearlman, 1999) which reside in the subcutaneous nodules for up to 10 years (Timothy M. Goater, Cameron P. Goater, 2013) in close proximity to the lymphatic tissues and vessels. Nodules can form in different regions of the body depending on the geographical area. It has been concluded that most infections are below the waist in Africa whereas in America, they tend to be above the waist (Larry S. Roberts, John Janovy JR, Gerald D. Schmidt, 2013). When blackflies take a blood meal, they ingest mainly tissue fluids as their mouthparts are not suited to deep piercing; as a result, they ingest microfilariae which, after ingestion, migrate to the thoracic duct. Here, a series of moulting takes place from the J1 stage to the infective J3s filariform, which migrate to the labium of the blackfly and can enter another human host when the blackfly feeds again (Larry S. Roberts, John Janovy JR, Gerald D. Schmidt, 2013).

It has been observed that Tenia Solium commonly affects farming communities in developing countries in India, Sub-Saharan Africa, Asia, Latin America and a small parts of China (Garcia et al., 2014). Taeniasis seems to be one of the main neglected tropical diseases (NTDs) affecting South East Asia. In some less developed countries, where dog meat is consumed, dogs can become infected and act as a vector for the transmission of Tenia Solium cysts (Aung and Spelman, 2016). Furthermore, pork is the main source of protein in South Asian countries (not including Muslim countries, where pork consumption is rare as a result of halal dietary restrictions, such as Malaysia and Indonesia), making these countries more susceptible to the infection. However, non-endemic countries such as ones in Europe, North America and Muslim countries, cases of taeniasis have been reported as a result of travel between endemic and non-endemic countries; this was presented in a case where cysticercosis broke out in an Orthodox Jewish population in New York City (Garcia et al., 2014).

The general location of the occurrence of Onchocerciasis depends on where the vector (the blackfly) development occurs. Generally, onchocerciasis has been associated with the presence of rivers as larval stages of the blackfly require a well-oxygenated, fast running stream to develop and adult flies only survive in high humidity levels and with the availability of streamside vegetation; hence, onchocerciasis was given the name ‘river blindness’ (Larry S. Roberts, John Janovy JR, Gerald D. Schmidt, 2013). It has also been observed by many studies that similarly to taeniasis, onchocerciasis is prevalent in African countries, particularly in West Africa (O’Hanlon et al., 2016). It has also shown occurrences in the Arabian Peninsula and the Americas. The World Health Organisation (WHO) estimates that 120 million people worldwide are at risk of onchocerciasis and 96% of these are in Africa. Furthermore, 18 million people have been estimated to suffer from the infection; with 99% of these also being in Africa. Out of the people infected, over 6.5 million suffer from a skin disease (dermatitis) and 270,000 suffer from River Blindness. The infection is spread fast by adult blackflies, which live for approximately four weeks and can cover hundreds of kilometres during this time. (‘WHO | Life-cycle of Onchocerca volvulus’, 2012).

Tenia Solium can cause taeniasis (an infection in the intestine caused by adult tapeworms) cysticercosis (an infection in the tissue where cysticerci reside e.g. brain or muscle) in humans (Gonzales, Rivera and Garcia, 2016). Taeniasis is caused as a result of consuming raw/uncooked infected pork. Symptoms of taeniasis are usually very rare and therefore, infected hosts usually do not recognise that they are infected with this parasite (Timothy M. Goater, Cameron P. Goater, 2013). If symptoms do occur, they include unexplained weight loss, loss of appetite or abdominal pain (CDC – Taeniasis – General Information – Frequently Asked Questions (FAQs), 2013). Unlike taeniasis, cysticercosis cannot be obtained from the consumption of raw/uncooked infected pork but rather is obtained from the consumption of tapeworm eggs in human faeces; this can occur if an infected person not washing their hands which may result in the contamination of food with tapeworm eggs (CDC – Taeniasis, 2013). Cysticercosis can occur in two forms, inside the nervous system (neurocysticercosis) and outside the nervous system. Neurocysticercosis is currently the most common parasitic disease to affect the brain, and is caused by the larval form of Tenia Solium (Rajshekhar, 2016).  It can cause seizures and epilepsy (Gilman et al., 2012) through the formation of a single enhancing lesion in the parenchymal tissue of the brain (García et al., 2010). It is known that immune responses cause an increase of immunoglobulin G (IgG), IL-2 and neopterin in the cerebrospinal fluid (CSF), however, the exact cause of this is unknown but it is suggested that immune responses may have a genetic basis (Del Brutto, 2014). 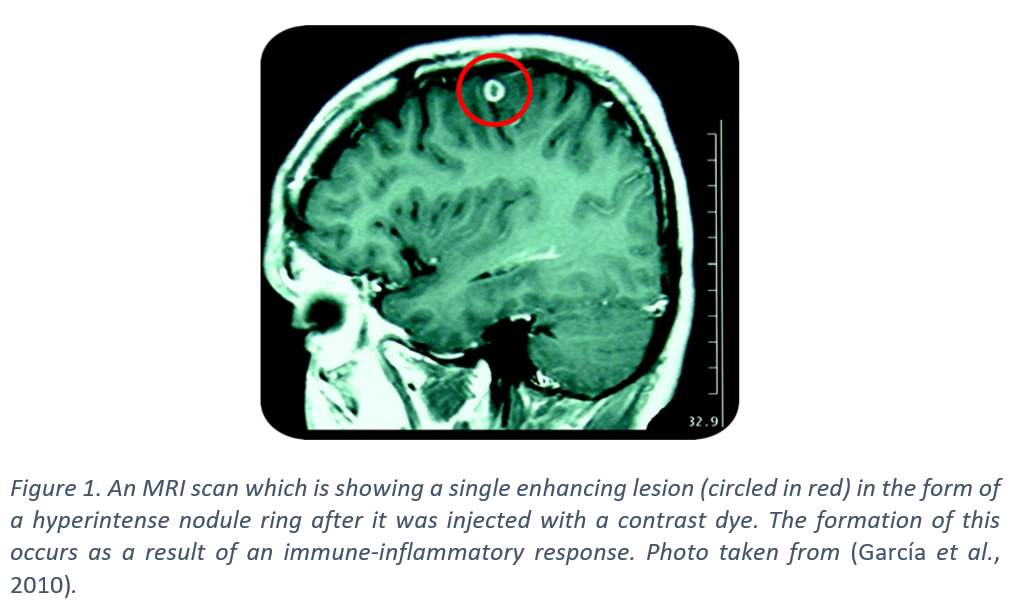 Onchocerca Volvulus can infect a host at two stages in its lifecycle; the adult worm stage and the microfilariae stage, with adult worms being less pathogenic. Often, when infected by adult worms, the host either shows no symptoms or may stimulate the growth of benign onchocercomas (palpable subcutaneous nodules). Seldom, the nodule may degenerate to form an abscess or the worms may become calcified (Larry S. Roberts, John Janovy JR, Gerald D. Schmidt, 2013). Microfilariae, similar to Tenia Solium larvae, induce an inflammatory immune response; in response to degeneration of microfilariae in the skin, which release Wolbachia bacteria, resulting in dermatitis (Larry S. Roberts, John Janovy JR, Gerald D. Schmidt, 2013). When microfilariae invade the eye, little to no response is cause. However, when they are degenerated, TLR2 responses and chemokine production occurs in response to Wolbachia; this activates neutrophils and eosinophils which are contained in chronic inflammatory cells which surround degenerated adult worms. River Blindness is caused by keratitis (a hardening inflammation of the cornea) which occurs when T cells produce Interleukin (IL)-4 and IL-5 as an immune response. Furthermore eosinophils degranulate in response to worm antigens, which disrupts fibril arrangement in the cornea (Larry S. Roberts, John Janovy JR, Gerald D. Schmidt, 2013).

Both parasites have different ways of prevention as taeniasis is mostly dependent on the sanitary conditions and the quality of evaluation of meat whereas onchocerciasis is dependent on the locations of the presence of blackflies. However, neither one of the two parasites has a vaccination to prevent infection yet.

Taeniasis is prevalent in poor communities as farmers can tame pigs easily because they are free roaming animals and do not need to be fed. To potentially prevent the occurrence of taeniasis/cysticercosis in poorly developed countries, the availability of health education, improvement in sanitation, vaccination of pigs and enhancement of inspection of meats. One of the main methods to prevent taeniasis in homes is to cook meat thoroughly; this should be done with a food thermometer. Whole cut meats should be cooked to at least 63°C (thermometer should be placed in the thickest part of the meat to ensure it has been thoroughly cooked) and ground meat should be cooked to at least 71°C (CDC – Taeniasis – Prevention &amp; Control, 2013).

The word Medical refers to preventing or treating injuries or illnesses, relating to the study or practice of medicine. Medical care involves caring for a patient and helping them through their journey to recovery.

Bioinformatic Analysis of Oncogenes and Tumour Suppressor Genes in Selected Cancers for their Diagnostic and Prognostic Value Abstract Cancers are a diverse range of diseases characterised by gene mu...

Identifying and understanding the needs of Alzheimer’s sufferers from the age of 65 and over around Thurrock County Introduction: According to the ‘Alzheimer’s Society’, in UK we have around ...