The cuckoo search algorithm (CSA) was developed by (X.-S. Yang & Suash Deb, 2009) and is an intelligent swarm-based algorithm that mimics the obligate parasitic reproduction of some species of cuckoos. This is accomplished by laying their eggs in the nest of host birds. The maiden CSA subtly balances local search space strategy and exploration of the search space and deploys a duo of control parameters; population size n and probability pa which checks elitism and balances the strategy for the search space.

In furtherance, a trio of components were discovered for the cuckoo search algorithm; selection of the best nests/solutions, exploitative random walk and explorative Lévy Flights by randomization (X. S. Yang & Deb, 2010).  Cuckoo search is applied to obtain superior solutions in spring design optimization. Ditto in welded beam design the authors have obtained optimal solutions that are also superior or the same (X. S. Yang & Deb, 2010).

A duo of modifications was proposed to escalate the convergence rate of cuckoo search to make it robust (Walton, Hassan, Morgan, & Brown, 2011):

An enrichment of the original CS through coalescence of an inertia weight w via a scaling factor  makes it adaptive and an increment in performance of the algorithm is observed as a result of the inclusion of Roulette wheel selection operator. The efficiency of the enriched algorithm is validated on an array of geometric synthesis problems (Abdul Rani et al., 2012; Chiroma et al., 2017).

The incorporation of two operators-annexing and cooperating- in the original CS lead to the heterogeneous enhancement and efficiency of the algorithm. To achieve this, the population is dynamically set. Simulated analysis results after evaluation on 15 benchmark function depict that the modified CS surpass the efficiency of M-elite

Cuckoos are becharming birds’ species not only owing to their melodious sounds, but because of their reproduction strategy. Their reproduction strategy is known to be aggressive. Many species of the cuckoo exist. However, the species ani and Guira are ill-famed for removing eggs of host birds and laying their eggs in communal nests to facilitate their hatching ability. Basically, three types of brood parasitism exist among the cuckoos: intraspecific brood parasitism, cooperative breeding, and nest takeover.  Some host birds engross in fight to prevent their nest from being taken over by conquering cuckoos. Through evolution, some cuckoo species have incremented the probability of their reproduction and lessen the abandonment of their eggs by imitating the colour and pattern of some host species. (X.-S. Yang & Suash Deb, 2009)

The cuckoo search optimization is conceptualized from the behavioral description of the cuckoo. The concept is itemized as follows:

Within the purview of maximization problem in cuckoo search algorithm, the fitness or quality of a solution is proportional to the objective function. Therefore, in cuckoo search, it is simple to arrive at optimal solutions without undertaking a comprehensive search. For the sake of simplicity, for each egg in the nest it maps to a solution and for each cuckoo egg in the nest stands for a new solution. The objective is to use the new and potentially superior solution to do away with substandard solution in the nest (X.-S. Yang & Suash Deb, 2009).

A pseudo code is generated in figure 1 below to summarize the three (3) canonical steps of the cuckoo search.

Nature makes it such that animals seek food in a stochastic or quasi-stochastic manner. The path sought by animals to forage is a random walk. This random walk describes a Markov chain where two factors determine the succeeding position for foraging: the current state and the transition probability. Whatever the direction is chosen inexplicitly depends on the probability that can be modelled mathematically (X. S. Yang & Deb, 2010).

An illustration of the preceding paragraph has demonstrated that assorted studies have been carried out to highlight flight behavior of many animals and insects. This is characteristic of lévyflight. (Reynolds & Frye, 2007) penned that fruit flies (Drosophila melanogaster) employ a series of straight flight itinerary punctuated by 90° spasmodic turn. This lévy-flight like behavior exhibited form a foraging pattern that is periodically scale-free. (Brown, Liebovitch, & Glendon, 2007)  indited that human foragers in their foraging pattern is characteristic of lévy-flight. Light waves can perform lévy flights in an optical material in a controlled way (Barthelemy, Bertolotti, & Wiersma, 2008). Sequently, in optimization and optimal search the application of lévy flight patterns have rendered bright performance (Pavlyukevich, 2007).

Cuckoo is one bird that uses Lévy Flight in foraging. A Lévy Flight is performed by a cuckoo i to beget new solutions Xt+1:

Where α > 0 is the step size which is related to the scales of the problem at stake. Most of the time, α=0 is used. The Xit+1 is a next location which is a derivative of Xti the current location. The product ⊕ is the entry-wise multiplication. Lévy Flight provides the random walk as it is efficient in exploring search space owing to its long step length. The random steps which are large are derived from a Lévy distribution: 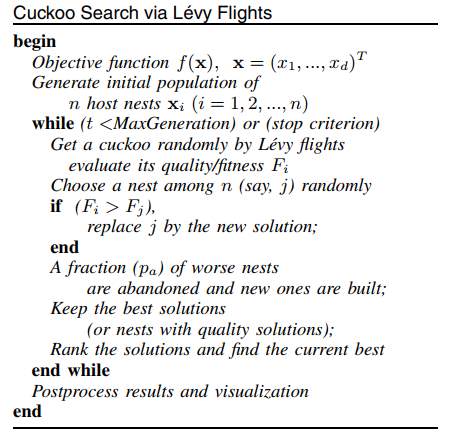 Deterministic parameter control technique modifies the values of parameters of a running algorithm using deterministic rules. Time-varying schedule is commonly used as the rule. This happens without employing any information about the search.

Adaptive parameter control determines the magnitude and direction of the value change of parameters using information about the search process.

Self-adaptive parameter control can be applied in the concept of evolution. Parameters are encoded into chromosomes, adapted and thereafter go through mutation and recombination. Better individuals are generated from the best values of the encoded parameters. These individuals have high survival rate and thence, have the potential to produce offspring that will propagate these improved values of parameters (Eiben et al., 1999).

Advantage of online parameter over manual or offline

Discussion about exploitation and exploration of the cuckoo search

Therefore, cuckoo search algorithm has to equilibrate amongst sound solutions derived from exploration with new areas in search space that require investigation with aim of obviating from being entrap in local minima, i.e. exploration. These exploration and exploitation based on Lévy flight is specific to cuckoo search algorithm (Tuba, n.d.). Hakli (2013) reckoned that exploration autonomously searches for global optimum for any optimization problem, i.e., and exploitation applies existent noesis in inquest for a complete solution.

A harmonious composition of global random walk and local random walk is deployed by the cuckoo search algorithm in a search space, which are managed by a switching parameter pa.

Lévy Flights provide the global random walk in the form:

Equation that depicts the local random walk is given below:

Where Xtj and Xtk are two different solutions selected stochastically by random permutation, H(u) is a Heaviside function,  is a random number drawn from a uniform distribution and s is the step size. (X.-S. Yang & Deb, 2014)

Online modification to the control parameter of cuckoo search algorithm