Strategic Management is the process of planning, monitoring and analysing the activities of an organization in order to accomplish the goal of the company (Andrews and Roland, 1987). It is the process of continuous planning which allows managers to analyse all strategies and cross functional business decisions before implementing them in workplace. This paper presents a detailed analysis of Tata Consultancy Services Limited, its strategies in past 10 years and rationale of choosing these strategies along with the critical evaluation of the strategic choice.

Tata Consultancy Services (TCS) is a reputed subsidiary of Tata Group. It is an Indian firm which operates its business across the world. It provides extremely wide range of IT services, Business Consulting, Business Process Outsourcing (BPO), Engineering and Infrastructure to its corporate customers (TCS, 2017g) .The firm operates its business globally with more than 387,000 trained consultants (TCS, 2017f).For the year 2016, the firm has generated an revenue of 16545 Million USD with an growth rate of 14.8% (TCS, 2017b)

SWOT analysis is a tool that can help in identifying the external and internal factors that affect the organizations future performance (Pickton and Wright, 1998).TCS has many strengths and weaknesses and the same were explained below

TCS is the branded organization which has its operations in IT sector. “Experience Certainty” is the main slogan of TCS which shows that the firm is treating its customers well and trying to provide them extremely good services so that the customers retain with the brand for longer duration. TCS has become one of the top Global IT service providers (IBEF, 2017). 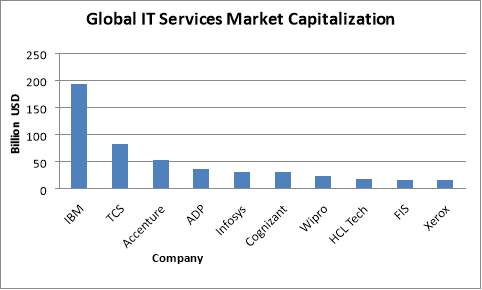 Above Graph shows the Market capitalization of IT service sector organizations for the Year 2016. TCS is standing in the 2nd position with the Market Capitalization of 82.45 bn USD. It is the first Indian IT firm to have huge revenue and capital across the world. TCS is ahead of many global competitors such as Accenture, Cognizant etc. 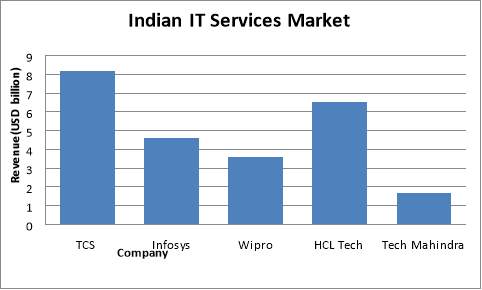 Above Graph Shows Revenue of the Indian IT Service Sector firms. TCS accounts nearly half of the Indian IT industry combined market capitalization. It is the leading IT player in India. It reported an revenue of 8.2 bn USD (April-September, 2015) (IBEF, 2017)

TCS offers IT Solutions to many industry clients such as banking, financial services, insurance, medical, rental, manufacturing and construction etc. It has done segmentation of enterprises that are seeking IT solutions

The above chart shows that TCS is much dependent on BFSI (Banking and Financial Services) which is threat to the organization. During the 2007-08 Global crises, Banking and Financial services sectors are largely impacted which in turn impacted other industries and IT industry is one among them. TCS experienced decline in its revenue in 2008 as it expected 42% of revenue from BFSI sector(TCS, 2008) .In year 2010, TCS announced that it is going to formulate an strategy for reducing its dependency on BFSI by pulling up the revenues from other industries (TCS, 2010) .But the above statistics shows that there is no major progress.

TCS manages all its verticals by allocating responsibilities to its employees as per their skills and abilities. There are three main levels of employee roles which are technical, managerial

and community level. Employees in all these levels work together to fulfil their responsibilities and targets. This organizational structure supports TCS in minimizing confusion and conflicts at the workplace (Oden and Nathdwara, 2014)

External Environmental analysis is another important aspect of the organization as it helps the firms to ensure that they have fully addressed its current and future operating environments. This also helps the firms in formulating new strategies for gaining success in the market. This external analysis  is often referred as PESTEL Analysis(Political, Economic, Social, Technological, Environmental and Legal influences) (Clegg et al., 2017)

Over all, Threat of entry to IT industry is Medium .It is easy to enter but difficult to establish and sustain for longer durations.

Over all, it is clear that more number of firms in IT industry is leading to High Bargaining power of customers.

[1] TCS has been rated AA+ with 78.3 brand strength index which is highest in the IT Services Industry

[6] Due to the changes in immigration policies. TCS overseas employee get a pay approximately twice when compared to Indian employee

Business strategy is a set of guidelines that sets out how a business should operate and how decisions should be made with regards to achieving its goals. A business strategy should help to guide management and employees in their decision making. Benefits Of Enterprise Resource Planning In Bharat Electronics Methodology Example. Management is term which has numerous definitions according to the circumstances based on which it is defined....

Introduction In recent years sustainability has become more than just a short trend in countries all over the world and is now especially popular among businesses and organisations (Bateh et al. 20...