Jet noise is a common problem correlated with low bypass-ratio turbofan engines and turbojet engines. The research in jet noise was initiated by Sir James Lighthill in 1952 (Tam, 1998, p. 393) and his solid mathematical model of jet noise was firstly published in 1963, which includes the theories of subsonic and supersonic turbulent jet noise as well the solutions to them (LIGHTHILL, 1963, p. 1510~1515). Since the attention of aviation industry started to draw on the environmental impact, the noise generation and control of aircrafts where jet noise plays a significant role has become an active field of study over last half centuries. Nowadays, commercial aircrafts with high bypass ratio engines has improved the jet noise control based on Lighthill’s method of reducing the relative velocity of the jet and air surrounded.

Aeroacoustics is a rather recent field of study involving both aerodynamic and acoustic phenomenon (Anselmet and Mattei, 2016, p. 7). The birth of aeroacoustics dates to 1952 when Sir James Lighthill published the first part of his On Sound Generated Aerodynamically, General Theory building up the theory of the production of aerodynamic sound (Lighthill, 1951). The second part, Turbulence as a Source of Sound specifying the research to turbulence as a source of sound and validating the theory from experimental data (Lighthill, 1954).

In 1963, Ffowcs Williams extended the theory initiated by Lighthill in 1952 to solve the transonic and supersonic eddy convection speed. The original Lighthill’s theory illustrates that the intensity of radiated noise increases with eighth power of the jet velocity, which is known as Lighthill Vj8 Law. Williams investigated that the quadrupole degenerates into simple sources whose radiation intensity increases with the third power of the jet velocity for supersonic jet (Williams, 1963). These two theories are the most important in Acoustic Analogy Theory (Tam, 1998, p. 394).

In 1970s, the discovery of turbulence in jet and free shear layer is made of both large turbulence structures and fine-scaled turbulence by several individual researchers led to the proposal of the significance of Large Turbulence Structures Model with which solely supersonic jet works (Tam, 1998, p. 395~396).

In the early 1990s, Jet Noise Laboratory of the NASA Langley Research Centre conducted high-temperature jet noise experiments with temperature ratio up to five, which offered an opportunity to validate the theory developed by Lighthill. The finding of turbulent mixing noise from both supersonic and subsonic jet has two distinct components of large turbulence and fine-scaled turbulence was addressed and validated.  (Tam, 1998, p. 398~401).

Since the technologies of computing and programming were developed rapidly in eighties and nineties, computational methodologies were introduced in all kinds of fields. Computational Aeroacoustics is a useful tool to assists on the researches of jet noise in terms of obtaining reliable computational results before conducting costly experiments as well as efficiently proving hypothesis.

For Linear Eddy Viscosity Model, the governing equation of RANS model (Tucker, 2008, p. 99)given below is deducted by averaging the Navier-Stokes equation:

This turbulence model is applied to estimate the Reynolds stress term:

The Boussinesq approximation is applied:

δijis the Kronecker delta in which

i≠j. The mean turbulent kinetic energy has the form of

23ρkδijis required later in the two-equation

Considering the large amount of time potentially taken if the methods of high-order equations are used in this project, only the two-equation

k-ϵmodels will be used to conduct simulations. In this case, the turbulent jet is assumed to be symmetrical. The details of

k-εmodels will be discussed in following section.

FWH model is based on the equation extended from Lighthill’s volume integral, where the model predicts far field sound form a flow region,

V, close to a moving surface,

To define the components in equation (1.5).

uiis the fluid velocity component in the

unis the fluid velocity component normal to the surface where

δfis the Dirac delta function and

p’is the sound gauge pressure at the far field.

The Lighthill stress tensor is defined as:

is the compressive stress tensor:

Note that it is not necessary for the surface

k-ϵmodel (Launder and Spalding, 1972) is introduced in which the assumptions of fully turbulent jet and negligible molecular viscosity are applied for this method. There are two transport equations governing the standard

The turbulent viscosity is modelled in the form of:

The turbulence kinetic energy generated due to mean velocity gradients,

Sis the modulus of the mean rate of strain tensor:

The turbulence kinetic energy generated due to buoyancy,

Prtis the turbulent Prandtl number for energy and

giis the component of the gravitational vector in the

βis the coefficient of thermal expansion:

Note that there are several constants obtained based on experiments in the transport equations.

ϵis rather a variable other than a constant. In ANSYS Fluent, it is defined as:

uis the perpendicular component of that.

k-ϵmodel enhances the accuracy for rapidly strained flows and swirling flows from the standard one. RNG

k-ϵmodel has similar transport equations of

Another reason for RNG

The following differential equation is applied to obtain an accurate description of the behaviour of effective turbulent number along with the effective Reynolds number:

As mentioned above, the effect of swirl is included in RNG

k-ϵmodel. This is achieved in ANSYS Fluent by modifying the turbulent viscosity where the modification works with axisymmetric, swirling flows and three-dimensional flows.

The inverse effective Prandtl number for

αϵare respectively. They could be derived by the following equation:

μmolμeff≪1where the high-Reynolds-number case is applied,

In the transport equation for

Rϵcan be further defined as:

and a new term

so that equation (2.10) can be rearranged into:

Note that for weakly to moderately strained flows of

k-ϵmodel provides results close to those of the standard one. Whereas for rapidly strained flows of

η>η0, a smaller turbulent viscosity is obtained from RNG

The model constants are

The ‘‘realizable’’ of the model means that it complies with certain mathematical constraints on the Reynold stresses. Using realizable

k-ϵmodel (Shih et al., 1995) provides more accurate prediction on the spreading rate of planar and round jet as well as the steady performance for flows of rotation and boundary layer under strong adverse pressure gradients, separation and recirculation. Realizable

The turbulent viscosity for realizable

The model constants are

k-ϵmodel has been built in ANSYS Fluent. The details of setting ups and results will be discussed in this section.

An axisymmetric half-cylindrical geometry is designed for the boundary of the simulation. The geometry has the diameter,

Lof 1 m. According to the theory of round jet (Kundu and Cohen, 2008), the diameter of the outlet,

doutletof the jet having the inlet with the diameter,

dinletof 0.12 m is obtained by using the equation:

ξ12Uis a constant for round jet with a value of 0.09. Therefore,

doutlethas a value of 3.6 m. The boundary was built in the form of:

Figure 3‑1 Side view of the boundary

Figure 3‑2 Isometric view of the boundary

The main reason for setting the boundary as illustrated as above is to saving mesh. The axisymmetric geometry of the allows the simulation calculate half of the turbulent jet which significantly save the mesh so saving the time of calculation. Considering the turbulent jet only behaves along the its propagation direction, the expansion of the jet is estimated based on round jet theory, which avoids the over-meshing in the part of air surrounded. 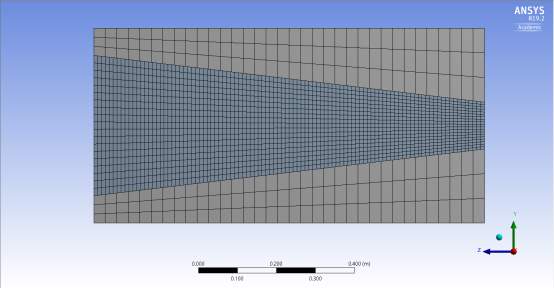 In the mesh part, body sizing is used to mesh the boundaries of surrounding and jet. The element sizes are set to 0.03 m and 0.01 m for surrounding and jet respectively and other settings are kept default. There are overall 57,538 elements generated eventually. The side view of meshed boundary and boundary names are presented in Figure 3-3. The solver is set to density-based with absolute velocity formulation and steady time-step since compressible flow is expected for this simulation. Standard

k-ϵmodel is chosen with standard wall function and all the constants as default values. In the material selection, air is chosen to be computed using ideal gas law since compressible flow is considered. In the boundary condition section, surrounding inlet is set as velocity-inlet with no velocity vectors where surrounding outlet and jet outlet are set as pressure-outlet. Obviously, symmetry is set to type symmetry. Since the User-Defined velocity profile for jet inlet is still under development, an exhaust velocity of Mach 0.8 is used with initial gauge pressure of 2,000,000 Pa and outflow gauge pressure of 101,325 Pa for the jet inlet.

The symmetry is the flat side presented in the figure

Figure 3‑3 Side view of meshed boundary

For the solution method, the implicit scheme with default Courant number of 5 is chosen since the steady time-step is used. All the convergence criterions are set to 0.001. Standard Initialization is used to compute from jet inlet and the reference frame is chosen to be relative to Cell Zone. The results are presented below.

The validation is conducted in terms of the behaviour of the jet. According to the research by Alessandro Bassetti (Bassetti, 2009, p. 130), the RANS solution from his research presented in figure 3-6 highly coincide the result in figure 3-5.

The presented simulation is conducted in a small scaled model which does not match up with real scaled nozzles of aircraft engines, however, larger scale leads to large amount of calculation required. Still, a larger scaled model is considered to be used later. On the other hand, the simulation does not present a comprehensive behaviour of the turbulent jet due to the limited size of the boundary set in which further improvements will be conducted.

As mentioned in the previous section, User Defined Functions will be developed for the simulation performing better results. The solution methods need to be further selected for more stable iteration.

The rest two of

k-ϵmethods will be performed as soon as all the details in the standard one are suitably addressed. The noise propagation simulation will be conducted using FWH model based on these three

*Note that the cells in blue are the individual project. The rest of the cells involve the plans for other modules.

Bassetti, A. (2009) A statistical jet-noise model based on the acoustic analogy and a RANS solution, Science.

This dissertation proposal has been written by a student and is published as an example. See our guide on How to Write a Dissertation Proposal for guidance on writing your own proposal.

Sciences covers multiple areas of science, including Biology, Chemistry, Physics, and many other disciplines.

Computational Simulation of Noise Propagation from A Subsonic Turbulent Jet

The Project Proposal of Computational Simulation of Noise Propagation from A Subsonic Turbulent Jet....

The Chromatographic Analysis of Adulterated Alcohols

Table of Contents Abstract Introduction 1.1- Alcohol sales and the effects of adulterated alcohols on licensed premises 1.2- Gas chromatography and an explanation of the Flame Ionisation Detector ...

Abstract This senior project aims to design a system to detect the presence of Meteors depending on the reflected radio signal. Radio telescope provides a practical and economical alternative t...