Coal is a black sedimentary rock in forms of macerals and minerals and is commonly used as solid fossil fuel due to its property of flammability. Coals plays a significant role in a country’s economic development and it is reported that more coal will be consumed in power station and other industrial fields in near future. Great amount of greenhouse gas (CO2 and N2O) and sulfur dioxide are emitted during coal combustion, which makes it the main cause of global warming and acid rain (Dong et al., 2014a). Therefore, it is necessary to remove the hazardous materials contained in the coal to meet the strict environmental regulations. Beneficiate is considered as the most economical and effective method to effectively utilize high ash coals.

Figure. 1.1 shows a diagram of experimental system with a fluidized bed separator. Compressed air was forced into an air tank by a roots blower and then went through the distributor plate. The flow rate was controlled by a ball valve and measured with flow counter. The pressure drop was recorded with an electromoter and the dynamic bed snapshots were measured by a high-speed camera.

The increasing consumer demands and greater environmental constraints compared with the past requires the need of coal beneficiation. Coal beneficiation is a process to remove impurities including ash, sulfur and rock to update its value (He et al., 2016).

The coal-cleaning process could be classified into chemical cleaning and physical cleaning.  The latter are based on the difference of the contaminants in density. Air dense medium fluidization is a process transforming tiny particle media such as magnetite from solid state into pseudofluid state. Airflow is injected from bottom of a vessel by air distributor.  Particles will spray out the hole in the fluidized bed container wall (LUO et al., 2007). The flow sheet of an air-dense medium fluidized bed is shown in Figure 2.1. 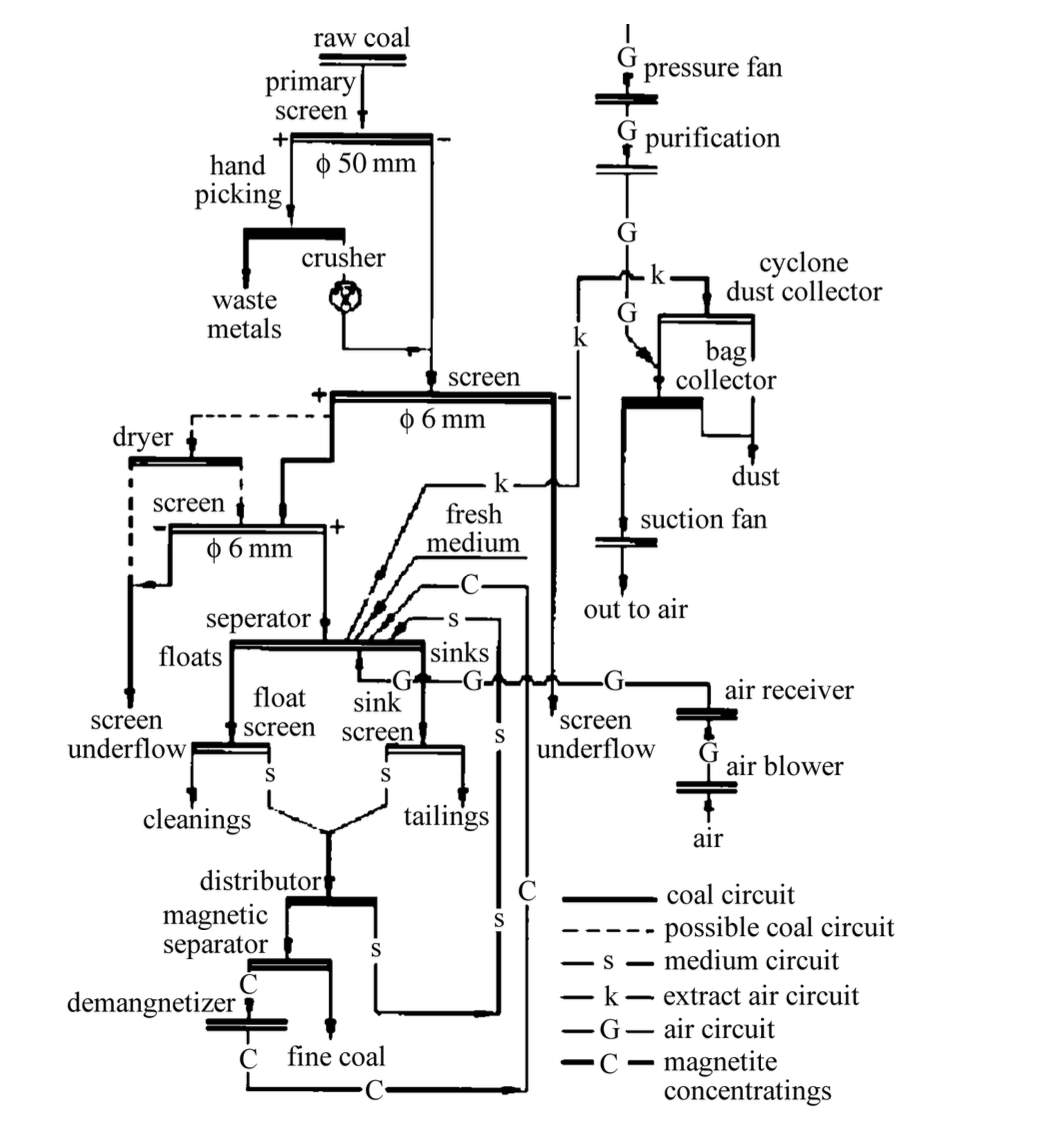 The gas-solid fluidized bed shows the following fluid characteristics (Figure 2.2). The air current naturally extends the bed surface to the same level and when the container is inclined, the surface of the bed returns to the horizontal level (Zhenfu and Qingru, 2001). 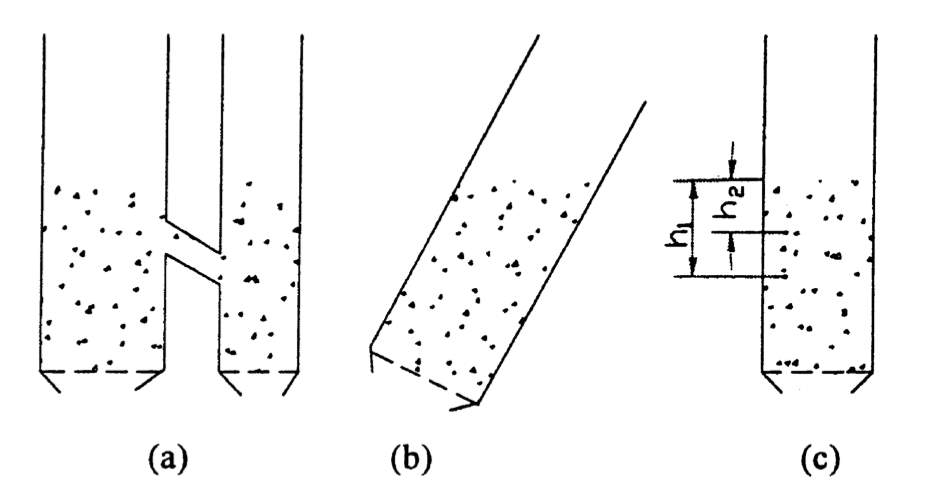 The density of particles floating to the top of the fluidized bed is less than the bed density and those sinking to the bottom of the bed have larger density than the bed density (Zhenfu and Qingru, 2001). It has been observed that the gas-solid movements in a completely fluidized bed has the following principles. The pressure drop between any two points in the bed can be considered as identical to the difference between the hydrostatic heads of the two points and it is expressed by the

P1 and P2 are the pressures at two different points, N/m2;

where ρb is the average density of the fluidized bed;

ρp is the density of the solid particles;

ρg is the density of the air;

ε is the porosity of the bed.

The buoyancy of beneficiation materials is caused by viscosity of the fluidized bed and it drops as the airflow velocity increases. The displaced distribution effect can be eliminated effectively by well-controlled airflow and medium size particle distribution.  The drag coefficient is determined by measuring the terminal velocity of objects falling through the fluidized bed and is given by

where CD is the drag coefficient;

Rem is the Reynolds number;

d0 is the diameter of the falling object;

ur is the relative velocity between the object and fluidized particles;

μe is the effective viscosity;

τ0 is the yield stress.

Here, we assume that the fluidized bed is a Bingham fluid and the fluidized particles looks like a Newtonian fluid. The effective viscosity and yield stress are obtained from experimental data. 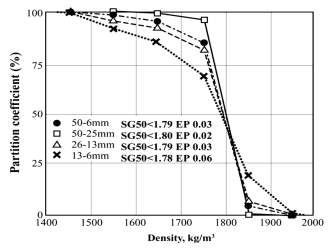 Results show that the feedstock with a raw coal of 50-6mm size and density fraction less than 1500 kg/m3 could form a pseudo-homogeneous and steady-state fluidized bed and could be separated efficiently during experiment runs (Oshitani et al., 2016). The partition curves for different size of particles with different density is shown in Figure 2.3.

Figure 2.3 The partition curves for different size of particles with different density (Dwari and Rao, 2007)

The motion behaviors of coal particles fed into air-dense medium fluidized bed are different for different particle and bubble sizes. The top of the bubble in gas-particle suspensions is a sphere and the bottom is concave on the inside (Zhao et al., 2016). Part of medium solids form a tail whirling fluid because of the lower pressure at the bottom than the nearby(Fig.2.4) (LUO et al., 2007).

The most common three types of motion are shown in Figure 2.5.

For the first type, the particle was suspending in the gas-particle phase and was layered by the weight of coal particles and gas-particle suspensions. The force on this particle involved in this process can be expressed below:

where F is the total force acting on the particle,

Fbf is the buoyancy,

Fdf is the drag force from gas,

Gp is the gravity of particle,

Fmr is the resistance force from the dense medium,

C0 is the drag coefficient,

CD is the resistance coefficient, d is the particle diameter,

ρb is the average density of bed,

v is the velocity,

g is the acceleration of gravity,

For the second type, the particle diameter was smaller than that of bubbles, for which the particle existed in the bubble. It had been founded that the particle fell faster because of the larger density of coal compared with air. Therefore, the particle could not be removed from the coal efficiently. The force equation acting on the particle is shown below.

For the third type, the particle was partially in a bubble and partially in gas-particle suspensions. In this situation, the particle moved laterally, which greatly influence the separation performance. The force equation is shown below:

pin is the pressure within the bubble;

pout is the pressure outside of the bubble;

α is the volume fraction in gas-particle phase;

φ is the sectional area of particle between bubble and gas-particle phase (Zhao et al., 2015).

In ADMFB, the coal particle exited in the dilute phase and dense phase are shown in Figure 2.6. The force equation for coal particles are described below.

Fa is the additional force acting on the particle due to the active pulsing air flow,

mdf is the mass gas discharged by the particle.

In the dilute phase, the particles could be separated according to density, while there is no possibility of separation in dense phase due to the high bed average density, low void fraction and high dynamic viscosity (Dong et al., 2014b).

Dry beneficiation for coal shows certain advantages whenever there are limited water supplies and the situation is not suitable for wet processing. Besides, the products from air-dense medium fluidized bed require no additional treatment process. However, today’s dry beneficiation technology is not efficient as wet process, especially referring to the same type of coal and size range.  The desired fluidization condition may be hard to achieve if the feed rate increases. Until now, it has been founded that small bubbles and dilute- phase zone are better for final coal separation. Further research should be conducted to improve the beneficiation performance.

Energy regards the power derived from a fuel source such as electricity or gas that can do work such as provide light or heat. Energy sources can be non-renewable such as fossil fuels or nuclear, or renewable such as solar, wind, hydro or geothermal. Renewable energies are also known as green energy with reference to the environmental benefits they provide.

Escaping Energy Poverty: An Assessment of the Energy Policy of India

The Johns Hopkins University ABSTRACT There are enough signs in the academic literature to uncover one of the primary causes of sustained poverty: the lack of access to modern energy. Energy poverty ...

A proposal for controllers that modify conventional, low-cost home based inverters into solar grid connected inverters with the ability of EV battery utilization....