National Basketball Association is a major basketball league for men in America; united of 30 teams . It is recognised by FIBA which is also known as the national governing body  for basketball in USA. NBA players are the world’s best paid athletes. NBA advance statistics are kept to estimate an individual or a team’s performance to analyse their social activities and interaction with their social network. This paper aims at finding relations to player’s salary with their performance along with their twitter follower by analysing the linear regression, PCA, SVM and Decision Tree technique.

“Does engagement on social media correlate with popularity on Wikipedia?

Is follower count or social-media engagement a better predictor of popularity on Twitter?”

“NBA players with certain set of proficiencies/characteristics are more likely to have more twitter followers than other players”.

Though the analyses of game-related statistics have been popular among coaches for a long time, the types of data collected and algorithm created have been constantly evolving to better serve changing analytical needs. This paper is intended to take advantage of advanced statistics, such as game played in a regular season, efficiencies against opponents, points scored, PACE, rebounds, blocks, steals, twitter followers  etc., that any team collects proprietarily in order to analyse the usefulness of these variables in characterizing and understanding the player’s contribution to their teams success.

Gathering the NBA data represents a nontrivial software engineering problem. Knowing that the ultimate goal is to compare the social-media influence and power of NBA players, In theory, this would be an easy task, but there are a few traps to collecting NBA data. The intuitive place to start would be to go to the official web site at nba.com., that is, downloading from a web site and cleaning it up manually in  R Studio. The data set comes from a NBA advance statistics data from Kaggle

Which has 63 variables and 101 observations. 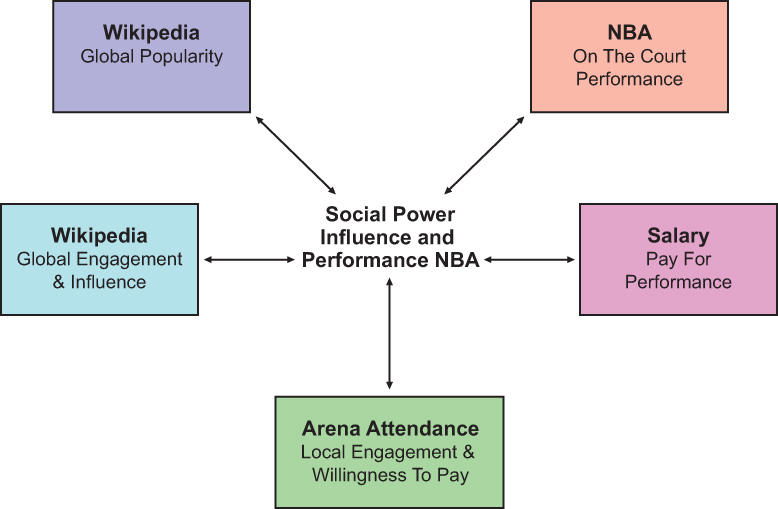 In order to prepare the data, data is splitting in training and testing data by using simple R code.70 percent of data was used for training and remaining data set was kept for testing the model. Finally cross validation was done to test data and check the model performance.

PCA is a dimension-reduction tool that can be used to reduce a large set of variables to a small set that still contains most of the information in the large PC1 have 67% of the variance, PC2 have 18% , PC3 have 7.5% and PC4 have 2.5% and the others are not that significant. The cumulative proportion shows that more than 97% variance is covered up to PC6. 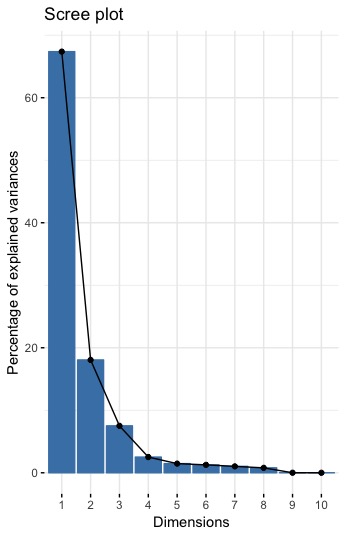 Multiple linear regression , a supervised learning is used to compare the relation between the respond variables and the other dependant variables. In order to compare residuals for different observations one should take into account the fact that their variances may differ. A simple way to allow for this fact is to divide the raw residual by an estimate of its standard deviation by calculating the standardized residual. 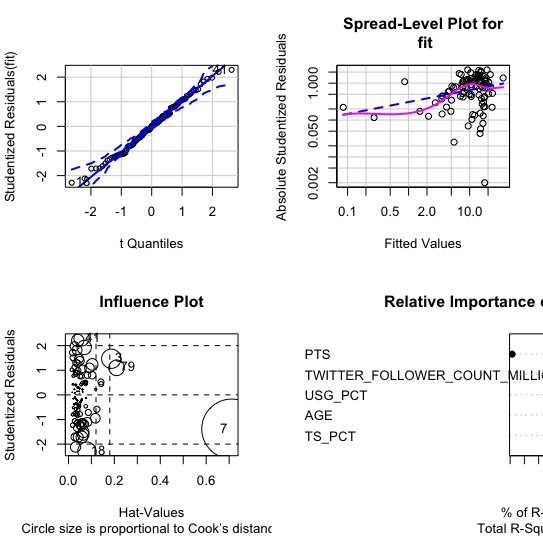 Standardized residuals are useful in detecting anomalous observations or outliers. From the above influential plot it is clear that this NBA data observation  is influential •  Size is not proportional to Cook’s distance. Its more on the right, so there is a low leverage in the model.

now build a new regression model using the ‘SALARY_MILLIONS variable and test for heteroskedasticity  by using the ‘gvlma’ package,

Summary of the best fit:

This tests for the linear model assumptions and helpfully provides information on other assumptions. In this case focus is at the heteroskedasticity decisions, which has been identified as not being satisfied. Therefore need to reject the null hypothesis and state that there is heteroskedasticity in this model at the 5% significance level.

Finally , the below table shows that the assumptions are acceptable, and therefore it clearly state that heteroskedasticity is not present in this model. Lastly, it will demonstrate that the model has corrected  graphically. As per previously, the first and third plots are the ones to look at. In the corrected plot the red lines are much more flat, and that the residuals are no longer clumped in locations. Therefore it shows  that  it has corrected heteroskedasticity in the model.

This output indicates that the fitted value is given by-

Inference in the multiple regression setting is typically performed in a number of steps. the summary statistics that the linear model yields a strong R2 result with an adjusted R2 of 0.6978

The significant F-statistics from the Wald test further confirms that the linear model decently fits the data and could potentially be used to make future forecasts .

As demonstrated in the residual vs. fitted value plot and normal Q-Q plot below, the linear model results in a very good fit except on a few data points. Data points like this will make the tail in Q-Q plot deviate from their expected position, and they should be analysed case by case. However, in general, the linear model results in a satisfactory fit from scatterplot, statistical summary and residual plots. 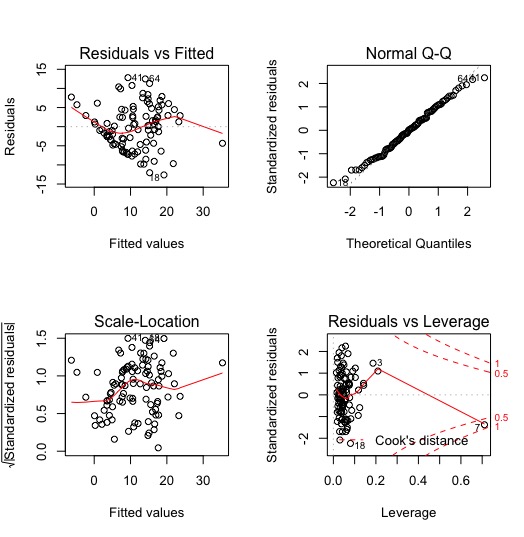 From the outputs of the model, there undoubtedly is a strong linear correlation between a SALARY per MILLIONS and the team PER. It makes logical sense because teams with more talented players are supposed to win proportionally more games. The relatively high R2 values and significant F-statistics confirm the goodness of fit of the model. There, however, still are some issues and complications about the model that I would like to discuss.

Welch Two Sample t-test proves that the results are statistically significant as the p-value is a lot smaller. So the alternative hypothesis is true as the difference in means is not equal to zero. In the end it shows that NBA players with certain set of proficiencies are more likely to have more twitter followers than other players.

RMSE was used to select the optimal model using the smallest value.

The SVM model gives us good results on the test data. Every player who has twitter followers is accurately assessed. According to this model, some players who do not have followers could be wrongly assessed. In relative terms, this is an acceptable misdirection consider to the nature of the problem.

The results of this model is great, it is likely that this model will  perform well. In addition, devising an efficient method of feature selection will have a great positive effect on the accuracy, specificity, and sensitivity of our model.

Players were not consistent in their game and/or not as good when they were playing on the road versus at home, or vice versa.

Teams went on long stretches of losing because of major injuries from key players, and did not bounce back quickly once those players returned to the line-up.

it is uncommon for players without high performance or maximum salary to have more followers and fans. For instance,  they have a rather effective pick-and-roll offensive system that works well for them and thus they are sitting comfortably above the linear regression line in the scatterplot.

Sometimes fan followers between two teams do not necessarily depend on the players. It is hard to factor this other factor into the model because these other factors that do not show up tangibly in players’ stats upon which our model is based.

Since the model is in a way more biased towards players’ individual strengths, teams like the Celtics are negatively impacted and misjudged. A possible direction of further research into this topic is to find a solution to address this issue, devising a method that could capture how much better/worse players are collectively.

The principles of data-splitting distinguish between fitting and validation samples – they are from the same data set but, at the same time, are distinct and independent from one other. Since the fitted model performs in an optimistic manner on the fitting sample, are to expect a lower performance of the model on the validation sample. The main focus is to measure the predictive performance of a model and its ability to accurately predict the outcome variable on new subjects. For the fitting sample it is interested in evaluating how well the model fits the data on which it was developed. Interest in the latter relates in particular to how much the performance ability decreases or degenerates from what was quantified in the fitting set.

The rpart model is the winner, RMSE of the different model  from the below table and the below sensitivity plots demonstrate that the model is intuitive: Higher Salary leads to higher number of twitter follower.

The closest point of the line to the horizontal axis from the below graph represents the model with the smallest forecast errors and vice versa. 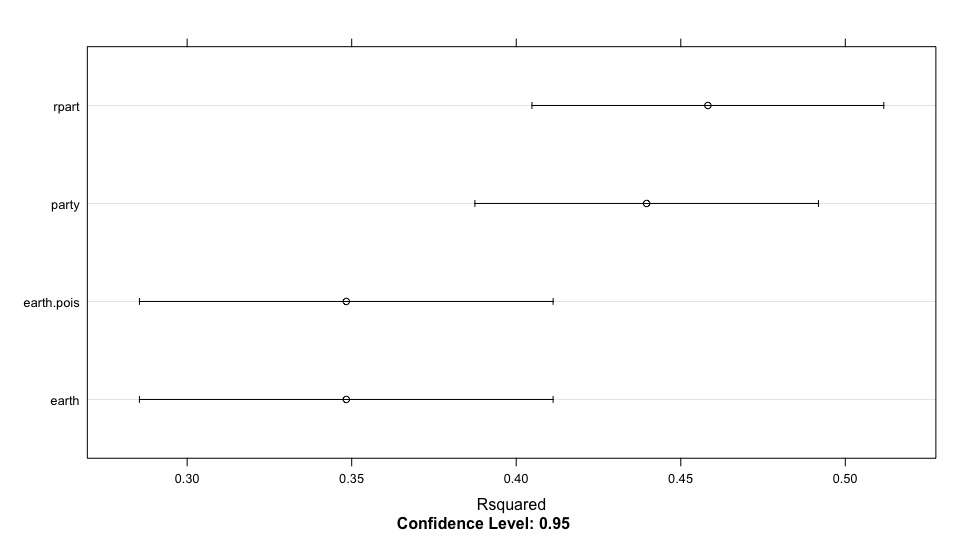 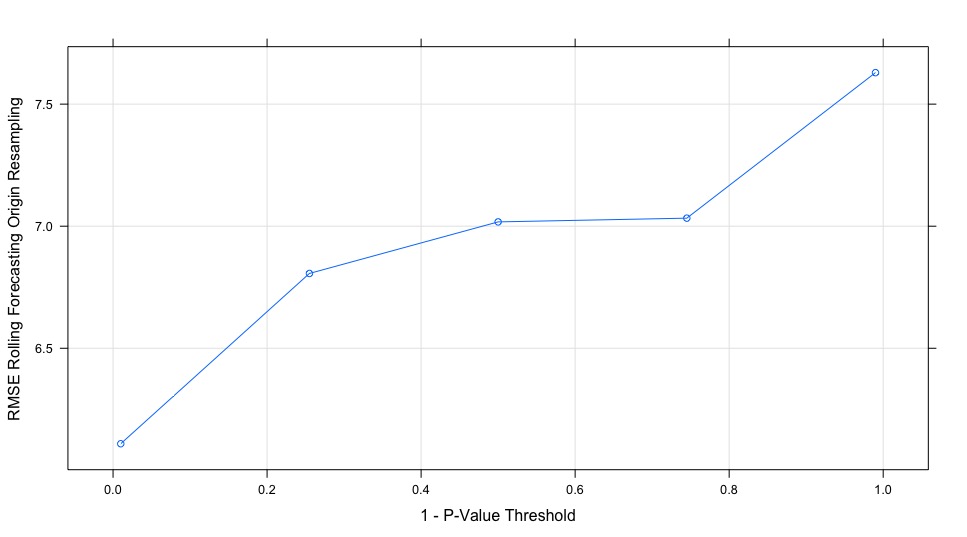 Although predicting the players contributions based on NBA advance statistics, it is impossible to get rid of the other factors involved in the game entirely. Sometimes worst player can surprisingly has more twitter followers. It is hard to analyse these factors into the model because it largely depends on the match-up and that do not show up tangibly in players’ statistics upon which our model is based. A possible mitigation is to add an additional term in the linear model to capture these factors.

NBA players wants to make the most money in salary should switch to teams that let them score and many NBA players do not have social Media handles and fan social engagement is a better predictor of true performance metrics than salary.

Schultz, R.W. Sports and mathematics: a definition and delineation. ResearchQuarterly,1980,5J_, 37-49.

Wilson, G.E. A study of the factors and results of effective team rebounding in high school basketball. Master’s thesis, University of Iowa, 1948.

Abbreviation for the team the player is on.

Games played where the team won.

Games played where the team lost.

Average of the offensive/defensive rating.

Effective field goal percentage. This is an imputed statistic.

Usage percentage, an estimate of how often a player makes team plays.

Pace factor, an estimate of the number of possessions.

Player impact factor, a statistic roughly measuring a player’s impact on the games that they play that’s used bynba.com.

Whether or not the player was active (posted) on Twitter last year. 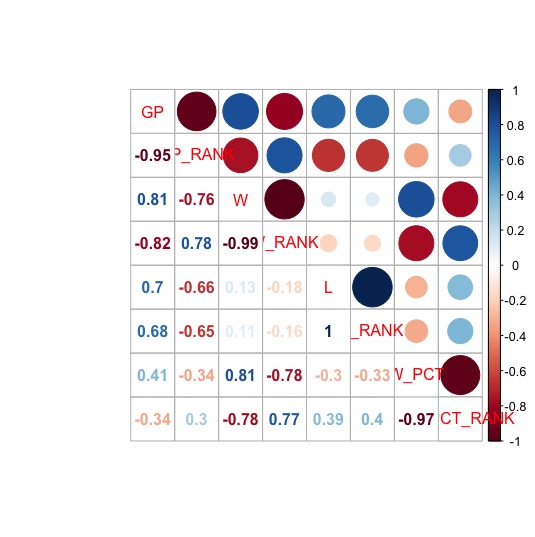 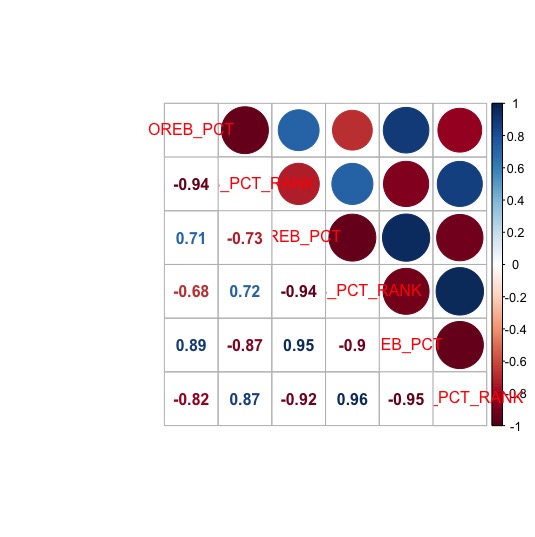 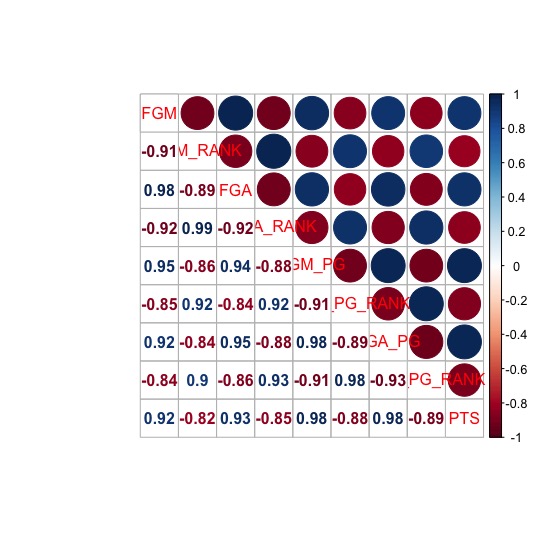 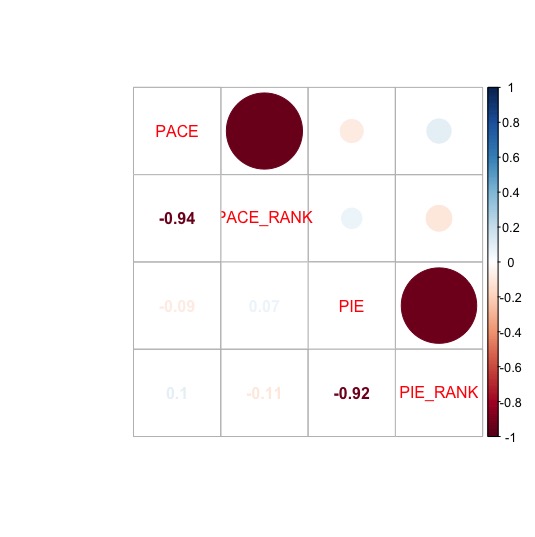 col.ind = “cos2”, # Color by the quality of representation

col.var = “contrib”, # Color by contributions to the PC 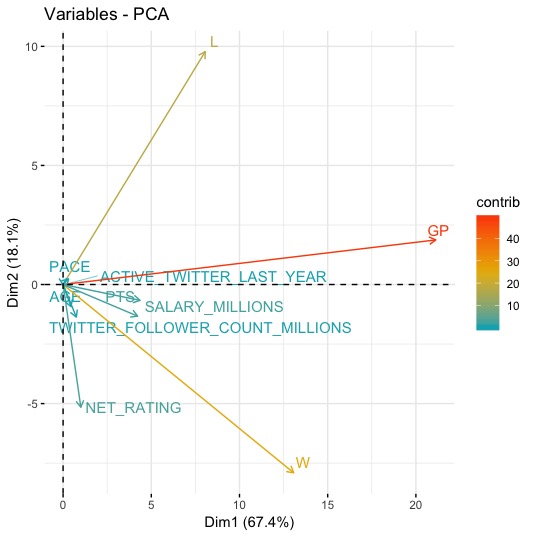 # Data for the supplementary individuals 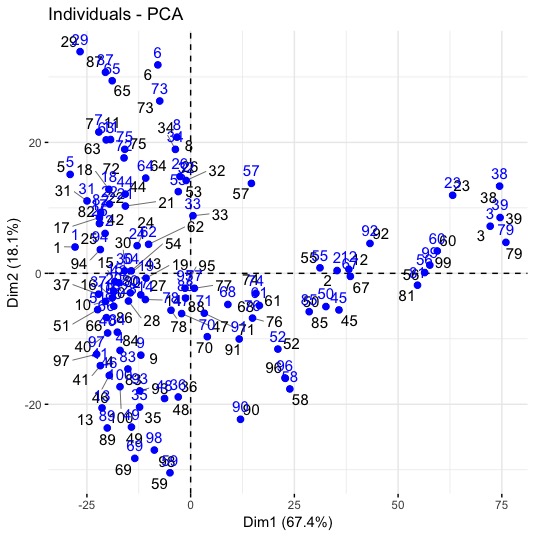 # Centering and scaling the supplementary individuals

# get basic information about the tree

# use the rpart.plot package to create a visualization

# a few adjustments to the diagram

# compare the distribution of predicted values vs. actual values

#summary statistics about the predictions

#(uses a custom function defined above)

#Leave one out cross validation – LOOCV

Social Media is technology that enables people from around the world to connect with each other online. Social Media encourages discussion, the sharing of information, and the uploading of content.

The aim of this dissertation is to explore the portrayal of feminine sexuality on social media, in particular that of the actress and supermodel Emily Ratajkowski....

Regulation and Investigation of Crime on Social Media

The potential and limits of linking users' registrations to their national identity numbers for the regulation and investigation of crime on social media....

The issue of social media usage in the workplace has become critical, and corporations have increasingly sought to minimize the losses in productivity which represent billions of dollars in lost revenue....