Benthic communities, animals dwelling within the sediment, are related to some sediment parameters such as substrate type, grain size and organic content (Galanidi, M., et al., n.d; Warwick & Uncles., 1980). The disturbance of sediment by biological organisms, bioturbation, also has an important effect on the composition of the benthic community (Warwick & Uncles., 1980) who is as well, an important indicator of anthropogenic and environmental impacts (Callaway, 2002).

Red Wharf Bay on the coast of Anglesey in North Wales has a lot of diversity throughout the food chain (Macer,C.T., 1967). Different benthic communities can be identified according with the type of sediment. The Venus community associated with fine sand and coarser sand, the Abra community associated with mud, smooth muddy san and mixed of gravel and sand and the Modiolus community founded on the rock floors and in areas with strong currents (A.S.Y.,Mackie., 1990; Warwick & Uncles, 1980)

The study area (Fig. 1) was located in the Red Wharf Bay in the Isle of Anglesey in North West Wales.  The bay is sheltered from the prevailing wind (south-west) and the main presence of benthic community is in muddy habitats (Macer,C.T., 1967). The structure of benthic communities is linked with the sedimentary environment, such as grain size and organic content ((M. Galanidi, et al., n.d). In the case of the Red Wharf Bay, the tides and wind-waves are important environmental factors to consider as an influence of the type of sediment in the area (Warwick & Uncles, 1980). 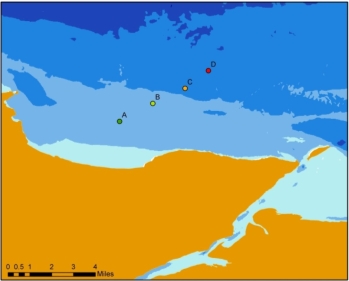 The data of the community composition of the 32 samples collected were treated for further analysis using PRIMER v.5 software package.

A data matrix to analyze similarity between points was obtained from the square root transform (sqrt), of the original community data and with the use of a Resemblance analysis (Hinz et al., 2011). Differences between sites were tested by ANOSIM analysis through individual contrast and between sites, where a positive number of R (-1, 1) suggest a higher similarity (Clarke & Warwick, 2001). Cluster analysis was performed using the Bray-Curtis index of similarity to find the similar samples within the same or different group (Kaiser et al., 2006). A graphic of the samples was created by a Multidimensional scaling (MDS) analysis to show the representation of the similarities between the samples. The most abundant species in the different sites was analyzed through a Simper analysis of the data matrix obtained by Resemblance analysis; the most abundant species in a comparison between sites was also obtained. Finally, from the original data of the community composition, we obtained a dominance curve from the sum of the species in each site (Clarke & Warwick, 2001).

SPSS predictive analysis software was also used with the data of the community composition obtained through Diverse analysis with PRIMER v.5 to reduce the multivariate data into a single index, which can be statistically analyze with univariate analysis. The single data obtained from the original community composition data is the number of species (S), total individuals (N), species richness (d), pielou’s evenness (J´), Shannon index (H´) and Simpson index (D) (Kaiser et al., 2004) An analysis of variance (One-way ANOVA), a parametric test of univariate data, was tested with a previous Levene’s test (Homogeneity of Variance) to determine the assumption of homogeneity (Dytham, 2015).

If p-value obtained in the Homogeneity of Variance test was less than 0.05 a transform of the data (sqrt) was needed before ran the test again. If the p-value was still less than 0.05, a non-parametric test (Kruskall-Wallis) equivalent to one-way ANOVA was tested. Also, to indicate the sites sampled with a significant difference, a Post-hoc test (Mann-Whitney U-Test) were tested in which the sites 1-4 (A-D) were needed to be defined and compared. This test provided an output value (U) and a p-value that establish the similarity between the samples (Dytham, 2015). If p-value in the Levene’s test was more than 0.05 the Analysis of variance (One-way ANOVA) was tested to obtain the statistical significance of the results obtained in the community composition in the different sites.

An Analysis of variance (One-way ANOVA) of the 5 most abundant species in the community was tested to obtain the significance of the sites.

The Biomass data of the samples collected, Mollusca, Crustacea, Polychaeta and Echinodermata were analyzed with the statistical PRIMER v.5 and SPSS software.

A data matrix to analyze similarity between the sites, with ANOSIM analysis, was obtained from the transform (sqrt) of the original biomass data through Resemblance analysis (Spencer, Kaiser, & Edwards, 1998). A graphic of the phylum Mollusca was created by a Multidimensional scaling (MDS) analysis to test the similarities between the samples in the different sites (Clarke & Gorley, 2006; Clarke & Warwick, 2001).

A Levene’s test (Homogeneity of Variance) was also tested with SPSS software, with the original data of the phylum Mollusca; to determine the assumption of homogeneity between the sites, as the p-value obtained was 0.000 > 0.05 the analysis of variance (One-way ANOVA) was also tested to determine the significance of the Mollusca biomass at the different sites (Dytham, 2015).

Figure 2: Cluster dendrogram from the similarities of the community composition in the 4 different sites sampled in Red Wharf Bay based on the percentage of similarity of Bray-Curtis.

Table 2: Table of the mean abundances and diversity indices (± 95% confidence interval) of the benthic community composition sampled at the different sites, depth range. Also results of the one-way analysis of variance (ANOVA)

Figure 3: Cumulative Dominance (%) plot of the benthic community composition from the samples collected in different sites and in different depths.

The results of biomass of the phylum Mollusc showed an average of 10.411 grams in the samples collected in the site 1, 1.009 grams in site 2, 2.183 grams in site 3 and 0.210 grams in the samples of Mollusca collected in site 4 (Figure 4).  The error bars in figure 4 represent the 95% confidence interval (CI) and because the error bars represented don’t overlap, a significant difference between the sites sampled is expected (p < 0.005). 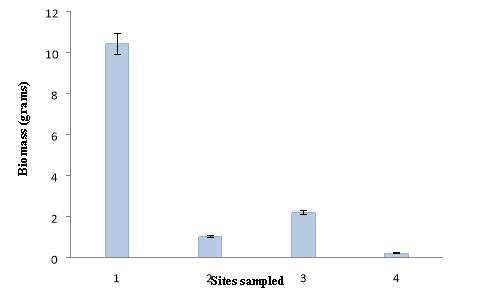 Figure 4: Bar chart of the biomass (grams) of the phylum Mollusc collected from the samples at the different range of depth. 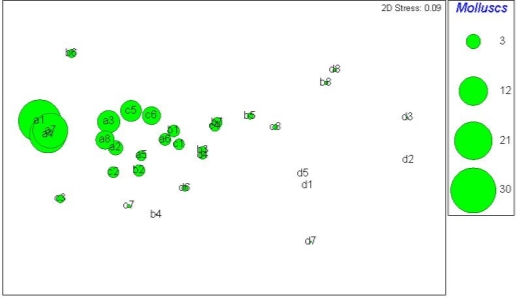 Figure 5: Multidimensional scaling (MDS) analysis to show the representation of the similarities between the Mollusc biomass in the samples collected in the different sites. The green circle with bigger diameter showed the higher biomass collected.

Table 4: Results obtained from the Pairwise test (p-value = 0.05) in the different sites.

The Relate test results of the comparison between the biomass and the environmental data showed a non-significant relation between the data. With Rho= 0.122, close to 0, and a p-value= 0.052 (p-value > 0.05).  Therefore, a Best test was not needed to determine the variable from environmental data with a higher relation with the biomass obtained in the different sites.

The purpose of the experiment has been to determine the relationship between the environmental factors and the community composition, 32 samples in 4 different sites at different depths were taken in Red Wharf Bay to achieve this aims. The epifaunal survey has a particular value for the community classification (H.L., Rees et al., 1999)

Non-parametric analysis of the abundance of the benthic community showed that there was not similarity between the samples collected at different depths (sites). The highest number of individuals of the benthic community was found in the depth range of 21-22 meters followed by the depth range of 9-10 meters. These results are similar to those noted by Kaiser et al., 2006 in their study of distribution and behavior of Common Scoter where they defined their feeding are depths less than 20 meters.

The results of the non-parametric test of the relation between the environmental data and the abundance showed a significant relation between the data, being the variables depth and type of sediment the ones that present the highest level of significance. Community composition is physically controlled by environmental factors (Warwick & Uncles., 1980) The importance of the type of sediment to determine the benthic community composition has been found in different studies like Warwick and uncles 1980 where the analyzed areas where determined depended on the type of sediment and diversity of species. Other studies like Robinson et al., 2012 or Seiderer and Newell., 1999 where they analysed the evidence of the correspondence between the sediment composition and the distribution of the benthic community.

The results from the cumulative dominance plot showed that from the samples collected at different depths, the richness of species from the benthic community was showed at site 2, range depth of 15-17 meters matching again with the distribution of feeding area of the Common scoter (Kaiser et al., 2006)

Non-parametric analyses were also tested with the biomass obtained from the Phylum Mollusc at the different sites sampled. From the different biomass obtained, Mollusc, Crustaceans, Polychaeta and Echinodermanta. The Phyllum Mollusc was chosen because of their importance as in for every study the percentatge value for the occurrence of mollusc exceeded 90% and 88% for bivalvas(Capasso, E., et al.,  2009; Kaiser et al., 2006). In the study done in Red Wharf Bay, a significant overall difference between the biomass in the different sites was found, being the site 1, depth 9-10 meters, with the highest average of grams.

The results of the non-parametric test of the relation between the environmental data and the biomass showed a non-significant relation between the data.  These results are not the one expected in comparison with other studies like Davis, T.R., 2017 where explained the influence of the physical gradients in the Phylum Mollusc and in particular the importance of depth.

Concepts of basic toxicology and environmental epidemiology, and the complex issues surrounding the prediction of the effects that the presence of environmental contaminants may give rise to....