Why we need to reduce the carbon footprint of infrastructure

The UK has a legally binding commitment to achieve an 80% reduction in its carbon emissions by 2050 and although there are no industry specific targets, the infrastructure sector does have control over almost one sixth of total emissions (HM Treasury, 2013). For specifically the rail industry, targets are included in the government franchise contracts which train operating companies (ToCs) must hit. The Rail Safety and standards board (RSSB) estimate that on the non-traction side energy use could be reduced by up to 50% (RSSB, 2018). Car parks represent some of the biggest assets on the non-traction side of the network so large savings could be made here. But as Sturgis (2017) states ‘the problem with current legislation is that it encourages actions to reduce operational carbon emissions without regard for the embodied carbon consequences’. To obtain these targets we need to look at the whole life of the infrastructure we are producing not just what energy we use to build it or run it. This is where Life Cycle Assessments (LCA) are used as designers now should be looking long-term from the outset.

Life cycle assessments took a large step forward in the 1990s when the international organisation for standardisation (ISO) defined its ISO 14040 series which provided a standardised approach to LCAs (Davies et al., 2018). This standard has been further developed into a more construction specific standard in the form of BS EN 15978:2011. The purpose of this standard is to ‘provide calculation rules for the assessment of the environmental performance of new and existing buildings’ (European Standard, 2011). Whilst this standard provided a set of rules for LCAs that could be applied to the construction industry it still left many gaps as Sturgis (2017) says ‘it is worth noting at the outset that, while this is a sensible starting point, it is proving difficult to implement with consistency’. The standard is implemented by consultants in different ways which leads to different results for the same building and other areas such as decarbonisation are not clear (Sturgis, 2017). So, this standard may define life stages and provide guidance on how to conduct an LCA for a building, but there are too many parameters that remain at the interpretation of the consultant which leads to a lack of consistency in results.

To tackle this inconsistency the Royal Institute of Chartered Surveyors (RICS) have released their own standard named: Whole life carbon assessment for the built environment which was published in 2017. The aims of this standard are to provide consistent and transparent whole life carbon assessment, make whole carbon assessments more mainstream and promote long-term thinking (Papakosta and Sturgis, 2017). This guidance is compulsory for all members of RICS who are undertaking a LCA. As Giesekam and Pomponi (2017) stated ‘the upcoming RICS guidance… should standardise some aspects, such as spatial and temporal boundaries of the assessment, reference study periods, life cycle stages included and data sources used’. So, the introduction of the RICS standard should lead to more consistent and robust LCAs. However, since its only compulsory for RICS members other professionals may still use other standards which creates the lack of consistency we still see in results today.

The consensus of the literature around is that current life cycle assessments are incomplete with only 20-40% of life cycle stages included, often just the production stages (De Wolf, Pomponi and Moncaster, 2017). Pomponi, Moncaster and De Wolf (2018) undertook a study in which they gave three consultants the same information (bill of quantities, technical drawings etc) for five projects and they found that they all reported different results. Each modeller can make different assumptions which have a profound effect on the on the result. As shown in figure 1 below the consultants in some cases produced wildly different results for the same project which highlights the lack of consistency in LCAs and the need for a standardised approach. Pomponi, Moncaster and De Wolf (2018) also found that a ‘simple cradle-to-grate assessment leaves out about 30/40% of the whole life carbon emissions’. Thus, proving the need for whole life assessments and not just partial ones. 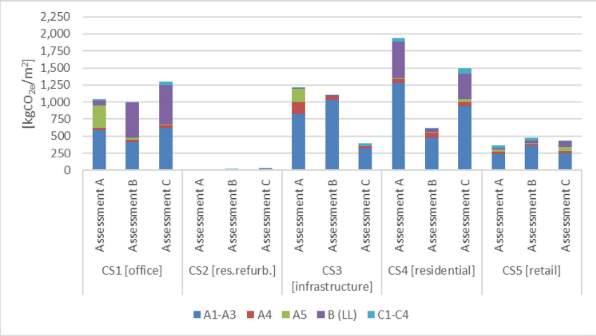 (Pomponi, Moncaster and De Wolf, 2018) Figure 1 – Results from the study for the five projects

Data and uncertainty analysis are also not undertaken in practice due to the perceived complexity of them and the labour intensive nature of them, reporting of data is also inconsistent with key parameters and assumptions not reported (Giesekam and Pomponi, 2017). So, there is limited opportunity for benchmarking as studies are inconsistent. The RICS guidance does now provide that guidance to widespread assessment and as Giesekam and Pomponi (2017) state ‘the industry must now demonstrate its commitment to tackling climate change by using this guidance to drive carbon reduction’.

Methods to reduce the embodied carbon of infrastructure

Weed Control, Sustainability, Hazards and Risks in Sweetpotato Cropping Systems Abstract Sweetpotato [Ipomoea batatas (L.) Lam.] is one of the most important food crops worldwide and is used for anima...

Proposal for Researching the Role of Ozone in NH Climate

This project combines observational data and a hierarchy of models, to assess the role of ozone in Northern hemisphere climate on all time-scales. ...