Robert and Gordon (1996) claims that outsourcing has expanded considerably over the last two decades. The reason behind this expansion is that economies of scale became more apparent in the recent years than it was earlier. Outsourcing is a management approach that involves delegation of an activity to an external service provider which was previously performed internally (Lankford and Parsa, 1999). The activity must have been performed internally before outsourcing to third party. If the activity is delegated to another vendor without performing internally then it would be ‘externalization’ rather than outsourcing. The term outsourcing itself shows from ‘out’ ‘source’ (i.e. external source). In the earlier phase of 1960, outsourcing was merely considered as contractual agreements wherein a supplier does processing or is providing services for another company. But, it is different from regular purchasing agreement as outsourcing is not selling off a part of the business. The Out-contracted services or processes must be replaced by the supplier in outsourcing. This is the basic difference between regular purchasing agreement and outsourcing. Outsourcing is not simply a make it or buy it decision, the activities outsourced must be of significant interest for the company (Bryce and Useem, 1998).

The term outsourcing often leads to confusion in what is meant by outsourcing, when used in place of a more specific term (Andrade and Chapman, 1998). According to Johnson (1997): Contracting-out, contract manufacturing, employee leasing, sub-contracting, consulting, contract services and contract programming, are often mistaken as mere outsourcing as all of these items are similar to outsourcing. But, on the other hand these items bear different characteristics as well which differentiates them from outsourcing.

A company will decide to outsource an activity when such an activity can be performed by other companies at a lower cost by using economies of scale (Kakabadse & Kakabadse, 2002). Nowadays, companies use common sourcing strategy of outsourcing as a tactical quick fix at the times of financial difficulty and rely on outsourcing strategy to come out of financial crisis or provide cash infusions (Johnson, 1997).

There are apparently other reasons underlying for outsourcing other than realizing benefits of economies of scale from competitive advantage. According to Fan (2000) the other motives to outsource are: reduced costs, improved managerial focus, improvised quality, enhanced flexibility to facilitate change. Fill and Visser (2000) identifies the same drivers with some additions such as: increased knowledge and capacity, potential for creating strategic business alliance, reduction of investment, technical considerations, increased access to functional capacity, and fewer internal administrative problems.

Outsourcing is generally accepted as a view of contracting out or disposing parts of business to achieve tactical benefits. However, Johnson (1997) in contrast cited a new view on outsourcing: viewing outsourcing as a way to offer structural change. According to the new approach, the company undertaking the activity (outsourcee) is viewed as being brought in by the outsourcer rather than contracted out. The author further developed these views and classified reasons to outsource into tactical and strategic reasons. Both these reasons differ from each other on the basis of their focus on short-term (tactical) and long-term (strategic) benefits.

The tactical reasons for outsourcing comes from the functions outsourced which are beyond the control of the company and difficult to manage. Smaller companies generally go for outsourcing with the view of achieving economies of scale while large companies often benefit from outsourcing activities which are out of their control. Another reason of this category may be that the company outsource activity at times of financial distress to obtain capital funds for core activities. But, these tactical reasons to outsource are of short term nature (Douglas and Meehan, 2001).

Apart from tactical reasons, there are other strategic reasons to outsource which focuses on longer term and are associated with gaining access to world-class knowledge and expertise, the risk sharing and the focus on core competencies. An organisation can reduce its risk significantly by means of outsourcing. The foremost strategic reason for outsourcing is to increase company focus on core competencies of the organization (Douglas and Meehan, 2001).

Outsourcing poses a number of rewards to an organisation such as cost reduction, focus on core competencies, improved quality. But, there are number of disadvantages also underlying to outsourcing namely enhanced dependency on supplier, employee redundancy, loss of control, increased expenditure due to ‘hidden’ outsourcing costs (Douglas and Meehan, 2001). According to Prahalad and Hamel (1990) every organization needs to identify, cultivate and exploit their core competencies in order to grow. Competitive advantage might be lost if core business are outsourced. Therefore, it should be seen by the company that no mistakes are made in identifying core competence. Significant Knowledge of the company will fade off if core activities are outsourced which is difficult to rebuild once lost.

Bonifazi et al. (2004) views ten traps in an outsourcing project that should be taken into consideration during the implementation of the project. To begin with, lack of management commitment; lack of communication plan; minimal knowledge and experience of supplier; failure to recognize outsourcing risks by companies; failure to obtain outside outsourcing professionals; failure to utilize internal resources by organizations; rushing through vendor selection; ignoring cultural differences; minimizing vendor productivity; the last trap described is the failure caused by not understanding the ongoing outsourcing relationship with the vendor.

Diminishing quality service and insufficient flexibility in achieving the desired results also contributes towards outsourcing risks. All these risks should be considered at the time of contract formulation. By designing a proper contract outsourcing risks may be well protected (Andrade & Chapman, 1998). The whole structure of the organization can be affected by a single outsourcing agreement.

Outsourcing is a powerful corporate strategy that requires flexibility in the sense global business takes place. Used effectively, outsourcing can very well live up to the standards set in the beginning of the agreement (Bonifazi et al., 2004). But, if used ineffectively the agreement may culminate in search of another vendor or by bringing the outsourced activity back ‘in-house’ (Andrade & Chapman, 1998).

Backsourcing currently lacks a common definition. However, Andrade & Chapman (1998) gives a definition which is easier to understand once the term outsourcing is understood. He defines backsourcing as process of bringing back outsourced functions in-house. When an activity originally performed internally by the company and then contracted out to a vendor, is brought back in-house is referred to as ‘backsourcing’ (Andrade & Chapman, 1998). Backsourcing is often mistaken as insourcing. But, both of them deviate on the aspect that insourcing is bringing back the functions in-house that were never outsourced but initially contracted out while in backsourcing the functions that were outsourced is brought back home. In other words, in backsourcing the activities must have been previously outsourced.

A company may end an outsourcing contract even if everything was all right. The reasons being behind this may be that the company would have restructured its organization, might have entered a new market or would have been affected by law changes (Andrade & Chapman, 1998). Some companies solve the problem of poor outsourcing results by bringing the outsourced function back home. Kakabadse & Kakabadse (2002) points out that such a remedy is often costlier to the outsourcer and discomfit to the vendor. Despite, of heavy costs for reabsorbing many companies still choose to undergo for backsourcing. Reverting back the outsourced functions also raises finger on the organizations’ previous decision and judgement. However, press reports show that backsourcing is becoming common now-a-days (Wong, 2008).

The various risks and problems associated with outsourcing explode motives for undertaking backsourcing. Deteriorating quality service and minimal elasticity in the agreement to respond to such deterioration is the single most common motive for backsourcing (Andrade & Chapman, 1998). Loss of control, increased cost and trustworthiness are also drivers of backsourcing (Wong, 2008). According to Wong (2008) power and politics may also be a motive for backsourcing. He explains that power and politics among senior executives of the organization might play an important role at the time of outsourcing. When this set of executives are replaced by new executives who believe in internal development of an activity previously outsourced, then the strategy inside the company will change once again from outsourcing to backsourcing. In other words, embedding of knowledge about the outsourced function within the company may lead to backsourcing. Changes in vendor organization may also trigger backsourcing. If the vendor organization merges with other organization to form a new entity, then there is a possibility of change in perception of new entity. The changed perception of the new entity on ongoing outsourcing contract may create disputes between the parties leading towards backsourcing (Wong, 2008).

The process of backsourcing can be a significant endeavour, but its activities are very intricate and require lot of attention together with hard work. If backsourcing plans are not formulated diligently, then it can easily cause employee fatigue (Azzouqa, 2008). According to Andrade & Chapman (1998) staffing is the main issue since competence can rarely be found back-home. This is because at the time of outsourcing an activity, the staffs related to the activity is often either transferred to the vendor company or is resigned from the company. Therefore, one implication of backsourcing is to hire staff from the contractor or from the market. The process of hiring might not be successful as the personnel might not have preferred competence as required by backsourcing company (Andrade & Chapman, 1998).

As a result of backsourcing, companies have to pay huge compensation to the vendor company to reabsorb the outsourced activities back into the organization, if the contract is terminated before its expiry. The strategy of backsourcing can also be adopted after the expiry of contract. However, in this situation also the company has to bear high cost for re-insourcing (Wong, 2008). Thus, in the both the circumstances organizations have to incur huge expenses. For example, Farmers group paid $4 million as termination fees to IBM to extricate itself from its agreement (Overby, 2003 cited by Wong, 2008).

Technology procurement is also a significant matter that should be addressed at the time of backsourcing an activity. When the activity is outsourced, the technology used to perform those activities is often sold since it is rarely of any use to company after discontinuation of activity. Therefore, bringing an activity back in-house whether in terms of backsourcing or insourcing would almost require acquiring new technology. This may again be a costlier practice for the company and can take long time to internalize technology within the organization (Andrade & Chapman, 1998).

However, reducing costs and control of operating costs are considered as most significant drivers of outsourcing (Fan, 2000).

Outsourcing is a business practice, often undertaken as a cost cutting exercise, whereby a third-party is hired to perform tasks or a specific activity that would traditionally be performed by an employee of the hirer. 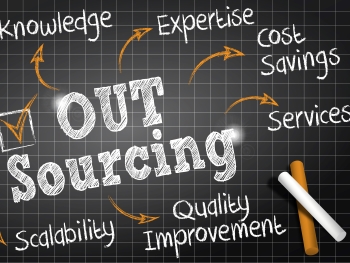 A STUDY OF OUTSOURCING CLINICAL RESEARCH PROJECTS TO ASIAN COUNTRIES (INDIA): ITS GROWTH AND FUTURE PROSPECTS ABSTRACT Outsourcing is increasingly becoming a trend within the clinical research industr...

Advantages and Disadvantages of Outsourcing

Investigation in to the advantages and disadvantages of outsourcing. Outsourcing is a typical routine with regards to contracting out business capacities and procedures to outsider suppliers....

CHAPTER NO.1: INTRODUCTION 1.0 INTRODUCTION: The business environment is changing rapidly in recent years and is affecting business all over the world. The management of various businesses are lookin...