Review of styles of gold mineralisation in the Laverton greenstone belt, Western Australia

The review is aimed at harnessing the different works of literature on assessing the gold mineralisation styles on the greenstone belt. The findings thereof will help in identifying mineral deposits genesis in the geological setting.

Early scholar (Salier et al., 2004; Salier et al., 2005) have divided the Muran – Margaret sector and the Laverton greenstone belt into two associations; a lower association 1 and upper association 2. Association 1 outcrop in the eastern two-thirds of the Margaret anticline ( Fig 1) and made up of tholeiitic basalts, high Mg basalt, clastic sedimentary units, BIF, graphitic chert/shale and ultramafic units. The thickness of the Association 1greenstones is approximately 7km and age estimated to be older than 2705Ma.

Association 2 which covers the remainder of the LGB composed of andesitic volcanic rocks, basalts, ultramafic rocks and feldspathic sedimentary rocks is identified by lack of quartz-rich sedimentary rocks. On top of Ultramafic rock units in association two younger felsic volcanic rocks, which are dominated by bimodal basalt-rhyolite centres are considered to be aged between 2690 and 2680Ma and thickness of approx. 35.4km. Association 2 conformably overlie Association 1. 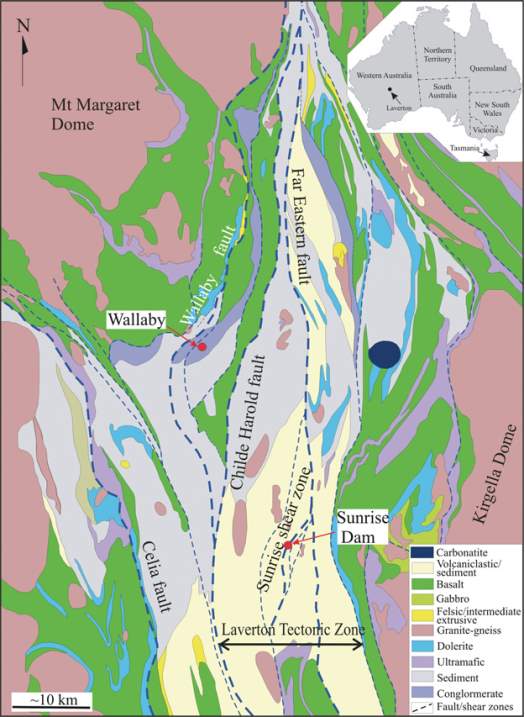 According to (Williams and Whitaker, 1993) the Laverton domain have extensive areas of layered gneissic and migmatitic rocks which flank the interior domes. Also (Williams and Whitaker, 1993) anticipated that several of these early shears in the central segment of the Province are indeed major extensional structures related to the evolution of regional gneiss and granite domes. Strain conditions in the boundary zones indicate that emplacement of the gneiss domains to the crustal level of the surrounding lower-grade greenstones was initially along relatively gently-dipping shear zones which were active during uplift. Structural relationships around both the domal granitic complexes and the later granite batholiths, however, show that regional shortening deformation events were not caused directly by the emplacement of any of the granitic rocks.

Rocks at the margin of the Laverton magnetic domain are strongly sheared, intercalated felsic porphyry and amphibolite, the margin forming a primary regional mylonite zone which affects the surrounding greenstones.

In middles of the Laverton, greenstone belts have undergone low-grade greenschist-facies metamorphism, whereas areas adjacent to granitoid plutons and the margins of belts bordering major granitoid and/or gneiss complexes have experienced higher grade contact and regional metamorphism, respectively (Salier et al., 2005). The metamorphic conditions of the boundary rocks imply that the sheets were intruded at a middle crustal level(Williams et al., 1989; Williams and Whitaker, 1993). A narrow zone of amphibolite – facies regional metamorphism surrounds the greenstones, and the northeastern boundary of the LGB abuts a thin belt of pyroxene- and hornblende – facies contact metamorphism (Salier, 2003), fig2. 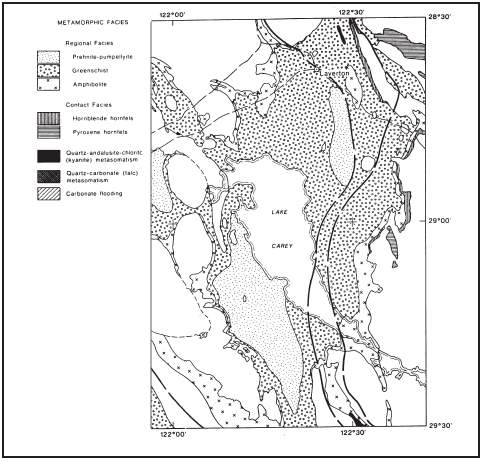 Laverton greenstone belt (LGB) gold deposits from the northeast of the Eastern Goldfields province of the Yilgan Craton are found near to or hosted by granitoids (Salier et al., 2005). Though according to (Salier et al., 2005) it was controversial at the beginning on determining the auriferous fluids source of whether from the granitoids or they acted like structural traps controlling the habitation of the deposits. There is a high similarity in redox conditions and mineralisation temperatures for all gold deposits in the Laverton greenstone belt indicating they are genetically related. The similarity in age of these four deposits, as well as previously published ages for the Wallaby (2650 ± 5 Ma) and Sunrise Dam (2654 ± 8 Ma), places three significant constraints on the source of auriferous fluids in the Laverton greenstone belt. Different ideas supporting the single fluid source has been consistent with the age of gold mineralisation in the Laverton greenstone belt. The Wallaby and the Granny Smith gold deposits are not the same age as adjacent granitoids, ruling out the exposed granitic rocks as a proximal magmatic fluid source. 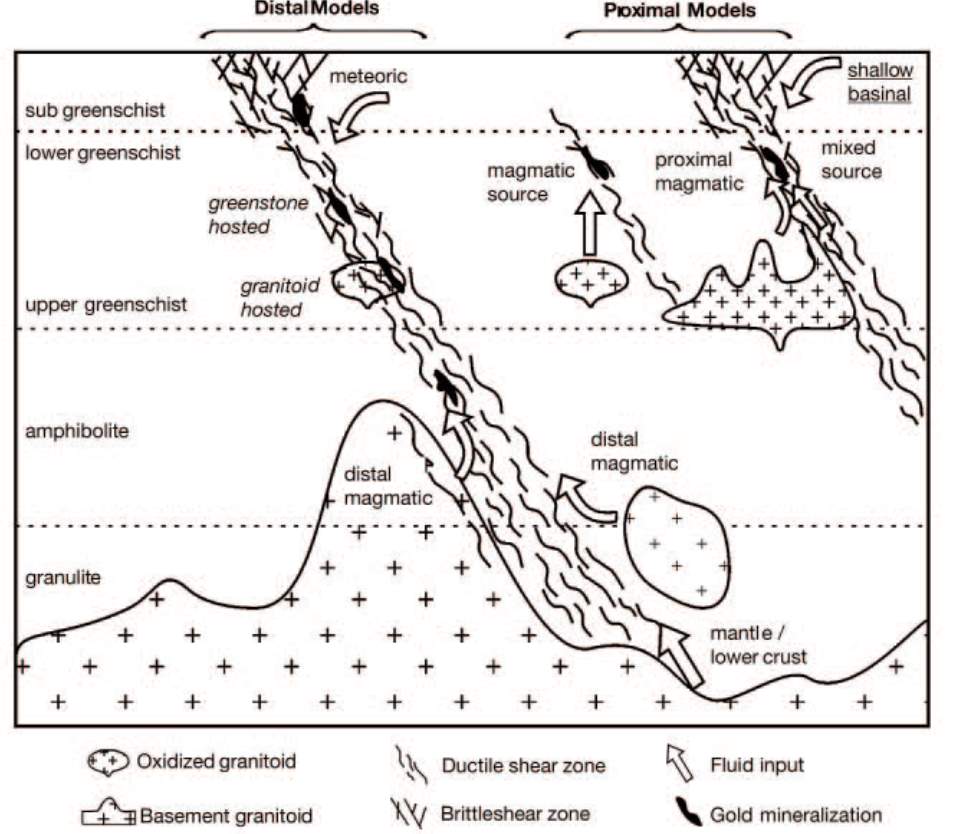 granitoids as a vital source of gold-bearing fluids. Adopted from (Salier et al., 2005) 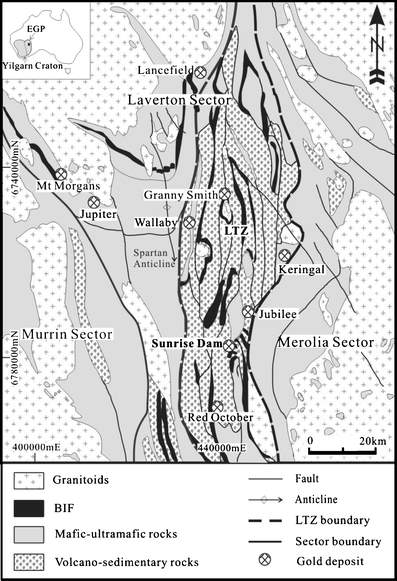 Figure 4 Simplified geological map of the Laverton Greenstone Belt ( adopted from (Sung et al., 2009), showing the sectors and the position of Laverton Tectonic Zone (LTZ) that hosts the majority of gold deposits in this area, including Wallaby Granny Smith and Sunrise Dam. Inset: the position of the area shown in the map (rectangle) in the Yilgarn Craton and Eastern Goldfield Province (EGP)

Host rocks and Proximity to the intrusive rocks

The structural control on gold mineralisation of Wallaby gold deposit is summarised by(Salier, 2003) in order of scale. At district level it is located in the Laverton tectonic zone, locally it is in chatterbox and Wallaby shear zones. On the mine scale it is in competency contrast of brittle actinolite – magnetite alteration pipe versus least altered conglomerate.

The Granny Smith gold deposit situated approximately 20km south of Laverton in the central northern part of the Laverton Tectonic zone (LTZ), fig 4. The deposit situated on the eastern margin of the Granny Smith granodiorite (GSG). Gold is hosted at the contact between the granitoid and a surrounding turbiditic rock package (Salier et al., 2004). The deposit is estimated to contain 74t Au at an average grade of 1.63g/t.

The Granny Smith pluton is zoned calc-alkaline magnetite bearing diorite to granite. Porphyry and uplite pegmatite dykes are common throughout the deposit. Other minor intrusions are carbonatite and lamprophyre dykes.

All ore zones form adjacent to granitoid bodies. The high-grade zones are noted to be at the igneous, sedimentary contact; in some parts localised in shear zones in small diorite sills.

The Granny Smith gold deposit is aligned in the central part of the northern section of N-S striking Laverton Tectonic Zone (LTZ). (Salier et al., 2005) Ascribed the deposit and the regional – scale shear zones to be continuous and not affected by the post mineralisation deformations. The sequence of historical deformation events for the Granny Smith deposit area is as follows: – D1 was isoclinal folding in BIF, reverse faults with minor back thrust; D2 N-S fabric. Regional rotation of greenstone belt; D3 broad E-W compression, which is a reactivation of D1 thrusts, shearing parallel to dykes and pluton margins and gold mineralisation. All the ore zones in the Granny Smith deposit hosted in the N- striking shear zone in contact with the granitoids.

The Sunrise Dam gold deposit is located 50km south of Laverton in the central eastern part of the Laverton Tectonic zone (LTZ), fig 1&4. The deposit is considered to contain over 300t of gold at an average of 4.1g/t (Salier et al., 2004). It is considered to be the largest deposit in the Archaean Laverton Greenstone Belt (Eastern Goldfields Province, Yilgarn Craton, Western Australia) (Sung et al., 2009). 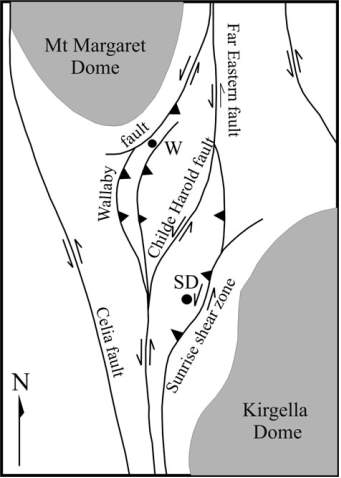 The Sunrise Dam gold deposit is hosted by the sedimentary package which faces upward. The strata at the deposit are classified into hanging wall and footwall sequences above and below the sunrise shear zone respectively (SSZ) Fig.3. The footwall sequence is comprised of lower coarse-grained volcaniclastic unit overlain by a thick turbiditic BIF and siltstone assemblage. Concordant microdiorite sills intrude the turbiditic assemblage which terminates at the SSZ hence missing in the hanging wall sequence. The hanging wall is composed of the massive sequence of volcaniclastic rocks. Rhyodacite dykes intrude the host-sequence through out the deposit. E-W trending lamprophyre dykes also intrude the deposit sequence(Salier, 2003).

Most ore is in BIF-host with some being in volcaniclastic rhyodacite and ultramafics. The rocks in the deposit have been overprinted by lower greenschist metamorphism.

Gold mineralisation in the Laverton greenstone belt as noted from the Wallaby, Granny Smith and Sunrise Dam is controlled by structures, lithological composition and alteration of host rocks.

A mixture of different fault types comprises these mineralized fault-shear networks within the same gold field, although thrust and reverse faults are a common component of the richer deposits(Micklethwaite, 2007). Features of gold mineralisation in the LGB spatial distribution describes two forms which relate to both regional scale and shear zone. These are spaced, cluster like distributions and linear trends of deposits. This style of clustered distribution of gold mineralisation adjacent to large-scale shear zones or faults is as noted from many other greenstone belts. This cluster like distribution of deposits in the belt represented by the Wallaby, Granny Smith and Sunrise Dam. The LGB studies indicate that the structural deformations attributed by distinct contractional and transpressive phases like that of the Kalgoorlie terrane. The deformation sequence is thought to involve an early stage of nappe-style recumbent folding and thrusting which did not develop pervasive fabrics (Micklethwaite, 2007).

Looking at the structural controls for gold mineralisation on the assessed deposits of Wallaby, Granny Smith and Sunrise Dam;  according to (Salier et al., 2005) Wallaby deposit which hosts 220 t of gold at 3.3g/ t, gold hosted in stacked series of thick sub-horizontal brittle fracture lodes. At the Sunrise Dam which hosts 230t at 4.1g/t is hosted in early-lower grade shear -hosted gold and later higher grade in pressure shadows of rhyodacite dykes. Either, at the Granny Smith, the deposit which hosts 74t at 1.65g/t  is hosted in the north-south striking shear zone.

According to (Salier et al., 2005)  it is noted that the Wallaby gold deposit in looking at its proximity to intrusive rocks; the deposit is located in polymictic conglomerate around syenite dyke suite, but the syenite suite itself is none mineralised. In the Sunrise Dam deposit (Brown et al., 2002) and (Salier et al., 2005) when compared to Wallaby lithological setting it is spatially associated with rhyodacite dykes which intruded the BIF, volcaniclastics and turbidite sequences for gold mineralisation. The rhyodacite dykes these are several small granitoid plutons with 1- 4 km mafic suites. Either, the Granny Smith gold deposit, gold mineralisation is found to be localised at the boundary of granodiorite pluton which are mafic suites and/or turbiditic sedimentary rocks (Ojala, 1997; Salier et al., 2005).

Salier, B.P., 2003. ‘The timing and source of gold-bearing fluids in the Laverton greenstone belt, Yilgan Craton with emphasis on the Wallaby gold deposit’, School of Earth and Geographical Sciences. The University of Western Australia.

Geology is an “Earth science” or “geoscience” concerned with the study of the physical structure of the Earth (or other planetary body) and the rocks of which it is made, the processes that shaped it and its physical, chemical and biological changes over time.

Chapter- 4 ABIOTIC ENVIRONMENTAL VARIABLES OF MORAINIC AND ALPINE ECOSYSTEMS Global warming/ enhanced greenhouse effect and the loss of biodiversity are the major environmental issues around the world...

Exploring Prospectivity on the Flanks of the Troll Field

Chapter 1 – Introduction 1.1 – Introduction and geographical location Troll is a super-giant Jurassic field. It is the largest field in the North Sea in oil equivalent terms and the second large...

MVT deposits stands for Mississippi Valley-type (MVT) deposits while SEDEX deposits in the other hand, stands for Sedimentary exhalative deposits....