Riboflavin, also known as Vitamin B, is a water-soluble compound that is mainly produced through engineered strains of Ashbya gossypii and Bacillus subtilis (Stahmann, Revuelta & Seulberger, 2000). Riboflavin is the precursor of two active forms known as flavin mononucleotide (FMN) and flavin adenine dinucleotide (FAD). These enzymes participate in the metabolism of carbohydrates, fats, and proteins in the body. They are vital for red blood cell formation and respiration, antibody production, and for regulation of human growth and reproduction. This vitamin is also essential for healthy skin, nails and hair. (Hofrichter, 2010) Riboflavin deficiencies have been associated with interference in iron metabolism (anaemia) and cardiovascular disease in humans. (José L. Revuelta, Ledesma-Amaro, & Jiménez, 2016) Riboflavin can only be obtained through diet as humans and animals lack the ability to synthesize it. Riboflavin can be found in natural sources such as milk, eggs and leafy vegetables. (Schwechheimer, Park, Revuelta, Becker, & Wittmann, 2016)

In 1879, Alexander Wynther Blyth was the first person credited to isolate a water-soluble substance with a yellow pigment from milk which he called lactochrome. (Northrop-Clewes & Thurnham, 2012) However, it was not until later work in the 20th century that the vitamin was isolated, its structure described, and its nutritional value revealed. Following successful isolation of Riboflavin from an egg white, milk and vegetables in the 1930s (Eggersdorfer et al. 2012) the vitamins structure was then understood – a methylated isoalloxazine ring with a ribityl sidechain. (Fig 1) This was now called lactoflavin. (Rivlin, 1975) It officially became known as “Riboflavin” by the Council of Pharmacy and Chemistry of the American Medical Association. (Northrop-Clewes & Thurnham, 2012) 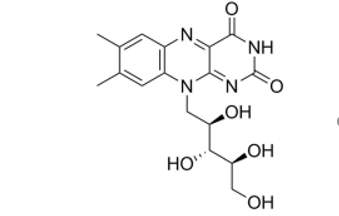 For almost five decades, production of Riboflavin depended completely on chemical synthesis processes. The production of Riboflavin has shifted from chemical synthesis to microbial processes in less than 15 years. (Schwechheimer et al., 2016) An outline of the chemical synthesis vs the biotechnological synthesis of Riboflavin can be seen in fig.2. Here you can see that the chemical process consists of several chemical steps whereas the fermentation route produces the vitamin in a single step which results in less cost for producers. (Schwechheimer et al., 2016) Most of the main producers of Riboflavin such as BASF, Roche, ADM/Aventis and Hubei Guangji have strayed away from the chemical process as they prefer to use the fermentative process to produce Riboflavin. (José Luis Revuelta et al., 2017) Many microorganisms have been used in the biotechnological process to synthesize Riboflavin. Along with previously mentioned microorganisms A. gossypii and B. subtilis, Candida famata and Kactobacillus fermentum have also been used to overproduce the vitamin. (Demain, 1972) The increased knowledge of the riboflavin synthesis pathway allows for the development of different approaches to increase the production of riboflavin. (Shrikant, Ishwar, & Rekha, 2006) This has been done through overexpression or disruption of genes encoding enzymes which either limit important steps or catalyse undesired reactions of the riboflavin synthesis pathway. (Stahmann, Revuelta, & Seulberger, 2000) 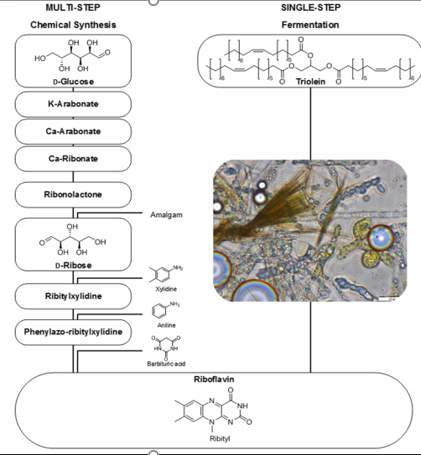 A. gossypii and B. subtilis share two important precursors for Riboflavin biosynthesis: ribulose 5-phosphate and guanosine triphosphate (GTP). The biosynthesis of Riboflavin starts with one molecule of GTP and two molecules of ribulose-5-phosphate as substrates. This pathway therefore involves two different branches which are known as the purine and pentose phosphate pathway (fig 3). (José L. Revuelta et al., 2016) All enzymes are known in this pathway and all genes are cloned for A. gossypii and B. subtillis. (Stahmann et al., 2000) The development of strains in A. gossypii and B. subtilis by applying methods of classical mutagenesis and metabolic engineering has been pivotal in increasing the production of riboflavin. (José L. Revuelta et al., 2016) This increased production is important as the demand for Riboflavin has also risen. According to the Food and Nutrition Board (1998) the recommended daily allowance of riboflavin lies between 1.1 and 1.3 mg for women and men. Riboflavin produced by microbial processes has been mainly used as feed additive (about 70% of today’s market) whereas 30% is used as food additive for pharmaceutical products. (Schwechheimer et al., 2016) It is estimated that the top leader in the market Roche, BASF and ADM is > 3,000 t/year. (Stahmann et al., 2000) Although bacteria and yeast have been proven to be good producers of riboflavin, it has been found that fungi such as A.gossypii are considered to be the best producers. (Shrikant et al., 2006) 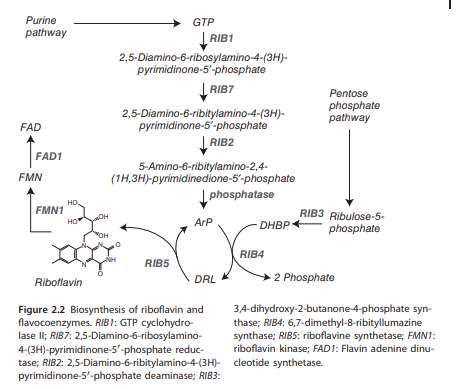 A. gossypii produces 40,000 times more of this vitamin than it needs for its own growth. (Shrikant et al., 2006) It has been discovered that in many microorganism’s iron suppresses the ability of the biosynthetic enzymes in the production of riboflavin. A. gossypii can repress the effect of iron which leads it to overproduction of riboflavin. The purine biosynthetic pathway was first looked at as GTP was one of the main precursors of riboflavin biosynthesis. Two enzymes – PRPP amidotransferase (encoded by AgADE4 in A. gossypii) and PRPP synthetase (encoded by four genes in A. gossypii: AgPRS1, AgPRS2, AgPRS3, AgPRS5) are major controls of the purine pathway and their enzymatic activity is inhibited by their end products. Therefore, strains were engineered to over express inhibition resistant forms of PRPP amidotransferase and PRPP synthetase which showed 10-fold and 2-fold increases in rioboflavin production. (Jiménez, Santos, Pompejus, & Revuelta, 2005) Increasing the supply of intracellular glycine also enhanced the production of riboflavin. This was done by using the encoded gene AgGLY1 in A. gossypii for threonine aldolase. Threonine aldolase is an enzyme that catalyses the chemical reaction to produce glycine. AgGLY1 was over expressed and it resulted in a remarkable enhancement in production of rioboflavin in the engineered strain. (Monschau, Sahm, & Stahmann, 1998)

DSM which is a company based in Germany have taken over the process of producing riboflavin using the engineered B. subtilis strains. (Schwechheimer et al., 2016) The DSM fermentation process is also conducted in a carbon-source-limited fed-batch. Molasses and thick juices are used as a carbon source. (Kirchner, Mauch, & Schmid, 2014) For a nitrogen source corn steep liquor and yeast extract can be utilized. The B. subtilis fermentation process is conducted at 39 to 40 degrees and last up to 70h. (Schwechheimer et al., 2016) The influence of agitation speed and oxygen supply is important on a rioboflavin fed-batch production process. It was found that a two-stage agitation speed process increased the productivity of the fermentative process in B. subtilis. Optimal cell growth and rioboflavin production was identified when the agitation speed during the first process phase was lower (600rpm) compared to the agitation speed in the later phase of the fermentative process (900rpm). (Man et al., 2014) A single step fermentation process to produce riboflavin has also been developed using B. subtilis strains. This process effectively produces rioboflavin from glucose in fed-batch operation. It was based on fuzzy control system which was applied to large-scale rioboflavin production. (Horiuchi & Hiraga, 1999)

The industrial production of riboflavin is one of the great success stories in the use of microbial processes in biotechnology and genetic engineering. In just over 50 years chemical synthesis has been completely replaced with fermentative synthesis of riboflavin. The market share of riboflavin produced by microbial processes increased from 5% in 1990 to 75% in 2002. (Hofrichter, 2010) This transition from chemical synthesis to the use of microbial processes in the production of riboflavin has reduced costs significantly, reduced waste and energy requirements and uses renewable resources in the fermentative process such as sugar or plant oil. (Stahmann et al., 2000) It is safe to say that industrial production of rioboflavin has come a long way, however, it is still subject to further development. An extensive amount of research and work has been put into strain development of B. subtilis and A. gossypii to increase the productivity of the amount of riboflavin produced. These genetically produced strains still hold unknown modifications and therefore are still far away from their potential maximal production of riboflavin. (Schwechheimer et al., 2016) Another area that could be of great research interest is the production of strains using second and third generation raw materials due to the increased environmental awareness. An example of this been A. gossypii being able to use waste activated bleaching earth discharged by an oil refinery plant, which contains 40% palm oil, which was used for riboflavin production. (Park, Kato, & Ming, 2004) Agro-industrial by-products such as grape must, beet molasses and peanut seed cake have also been tested to produce riboflavin. These have shown limited success in the vitamins production; however, further research is needed in this area. (Schwechheimer et al., 2016)

Pharmacology involves the study of drugs and how they affect the body. A pharmacologist contributes to drug development by researching and testing how the body reacts to medication, and whether the medication can have a positive impact on the body in terms of fighting illness and disease.

Development and Improvement on a Plant-derived Vaccine for Hepatitis B

Contents Lay Summary Abstract Introduction What is a plant-derived edible vaccine? How do they work? Advantages and disadvantages? What edible vaccines are there at the moment? The Problem Target Eva...