Looming over the skylines of Seattle and Tacoma is the sleeping giant, stratovolcano Mount Rainer (David A John et al., 2008; Driedger and Scott, 2008). With its height of 4392m, it is known as the tallest volcano within the strip of volcanoes called Cascade Range (Lancaster et al., 2012), as well as the most glaciated one (Vallance and Scott, 1997). Together with other volcanoes in the Cascadia and thousands of other, it forms Pacific Ring of fire (Figure 1). 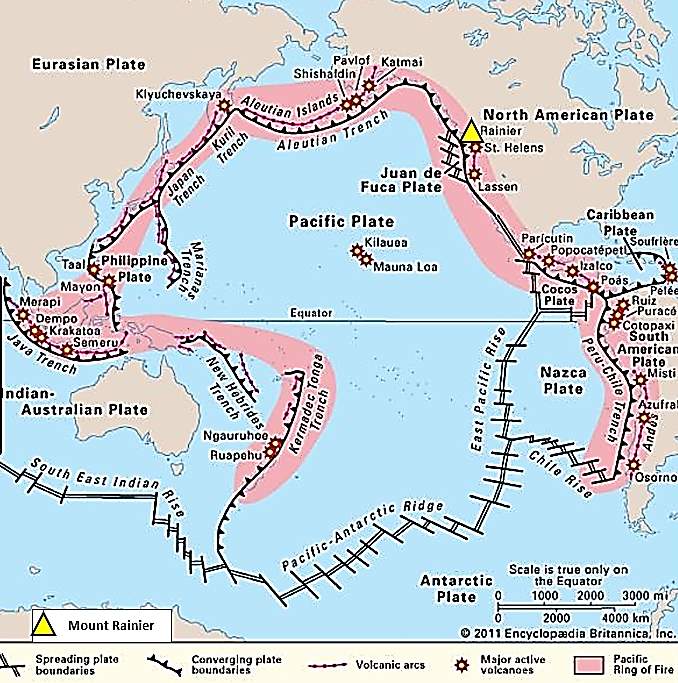 Its glacier covered peak is the main attraction of the Mount Rainier National Park which sees about 2 million of tourists every year (NPS, 2018). About 50-70km North-West form the national park lies Puget Sound Lowland and metropolitan area of Seattle and Tacoma (Sisson and Vallance, 2009). The number of citizens and visitors in and around the national park makes the volcano one of the most dangerous ones in the United States. It is not the lava, pyroclastic flow or ashfall that makes this mountain deadly, but the volcanic mudflows – lahars – that are capable of flowing all the way to Puget Sound (Sisson and Vallance, 2009).  Lahar is an Indonesian term used to describe a debris flow occurring on volcanic slopes (Gudmundsson, 2015). In other words, it’s a wet mixture of mud and rock debris resembling wet concrete that accumulates further sediment and other rubble while flowing down the hill. Large lahars are capable of reaching speeds in region of 20m/s (Pierson, Wood and Driedger, 2014) and travelling distances of 10s of kilometres, making them a significant hazard to lives and properties (Schilling, Jewell and Survey, 2014).

Five rivers drain the glacier meltwater from the volcano, (Figure 2). Only Cowlitz River flows to Columbia river south-west from the mountain. White, Carbon, Puyallup and Nisqually Rivers empty into Puget Sound. Records show at least 55 large lahars have occurred during the Holocene and all of the river valleys have experienced a lahar event during their lifetime (Finn, Sisson and Deszcz-pan, 2001). 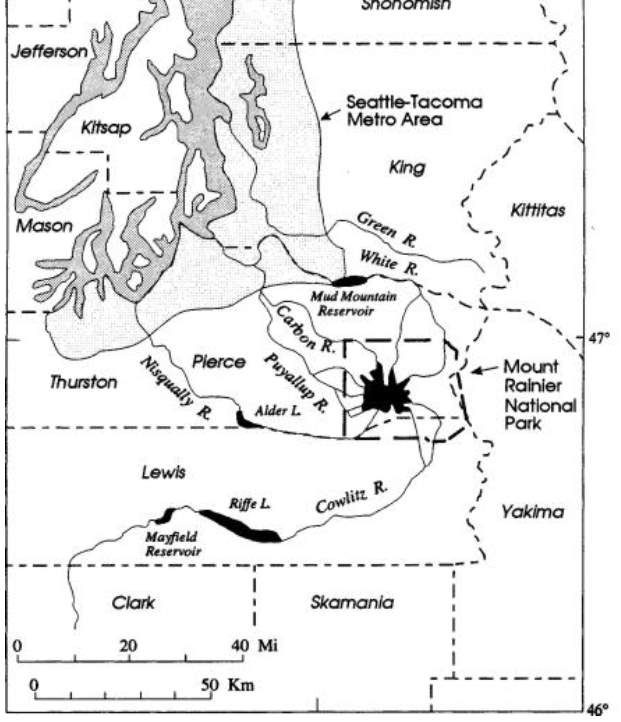 Figure 2 – Schematic of Mount Rainier and its drainages (NAP, 2018)

In the region of Seattle-Tacoma over 150k people currently live on deposits of historical lahars (Masters, 2011). Since 4 of the 5 river systems empty into Puget Sound, the metropolitan area is in a significant risk of future lahar events. The scope of this project is to assess the information available about the lahar hazards Mount Rainier poses on surrounding communities within the 4 river valleys.  Included will be the different types of lahars, their possible triggers, historical cases and their effects. Hazard zones, monitoring programmes and mitigation strategies will be also reviewed.

The research methodology consisted of Open University online library search within all Earth Science databases, with keywords of ‘lahar’, ‘hazard’, ’Rainier’, ‘monitoring’, ‘mitigation’ and various combination of these. The aim was to search within titles and abstract to find suitable literature. In addition, USGS, national park and county websites have been researched mainly for mitigation topic. Further search has been conducted based on references within reviewed articles.

Complex geological processes are behind the creation of the Cascade mountain range, fuelling the explosiveness of Mount Rainier. Of the west coast of Washington, an under-sea ridge is being created by upwelling mantle causing ocean floor spreading. The newly created oceanic crust, the Juan de Fuca tectonic plate, is being continuously pushed to the east where the it collides with the North American plate.  Since the oceanic plate is heavier it subducts under the North American plate. Deep underneath the Cascade range, partial melting of the Juan de Fuca plate forms magma powering the Cascade range volcanoes (Figure 3), such as Mount Rainier (Pringle, 2008). 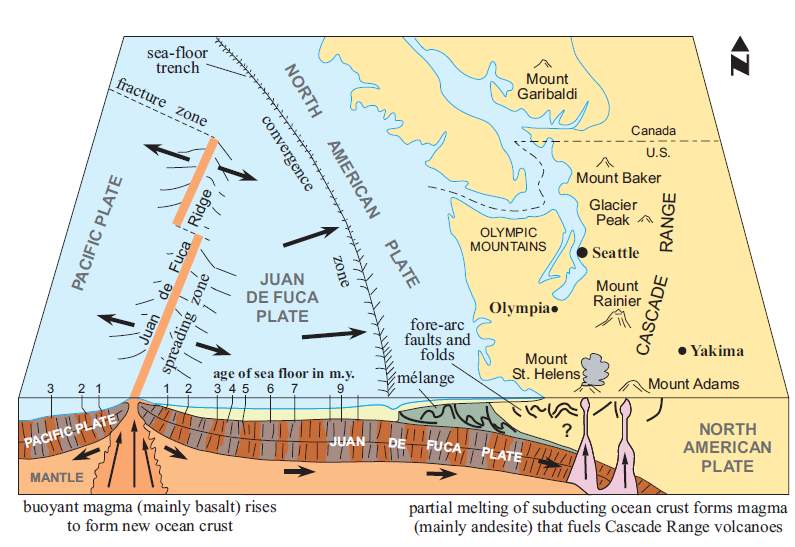 3. Types of Lahars and Their Triggers

The word mudflow gives an indication of the constituents of lahars. Water content plays a major role in lahar initiation as it allows the necessary lubrication for the mass to flow (Gudmundsson, 2015). During the past few decades and studying major lahar events, such one that occurred during Mount St Helens eruption in 1980 (Scott et al., 2001), scientists identified two different types of lahars based on their composition and these categories have been widely accepted in scientific community (Scott et al., 1995; Scott and Vallance, 1995; Scott et al., 2001; Masters, 2011).

Lahars containing 3% to 5% clay are called cohesive and are usually of a great volume allowing them to inundate areas 10s of kilometres from the volcano (Scott, Vallance and Pringle, 2001).

Non-cohesive lahar flows, with less than 3% of clay minerals, start as a debris flow that can transform down valleys to a ‘hyperconcentrated’ flow which is classed as an intermediate stage between a lahar and a normal streamflow (Gudmundsson, 2015). Such transition can occur during sediment deposition or convergence with a river or a tributary (Figure 4) (Scott, Vallance and Pringle, 2001).

Lahars can be triggered by a variety of ways which generally fall into one of two types, directly linked to eruption or ‘Primary’ and ones occurring after eruptions or ‘Secondary’ (Pierson, Wood and Driedger, 2014; Gudmundsson, 2015). Mount Rainier is able to produce both of these.

Primary lahars occur during eruption when a portion of the volcano’s edifice collapses creating a debris avalanche or a landslide. If the water content is high enough the debris avalanche or a landslide can transform to a lahar. Such event occurred during the 1980 Mount St. Helen eruption (Figure 5) when a side blast created a massive landslide (Schilling, Jewell and Survey, 2014). Significant melting of snow and ice during an eruption and  subsequent accumulation of sediment is another way primary lahars can be initiated (Gudmundsson, 2015). 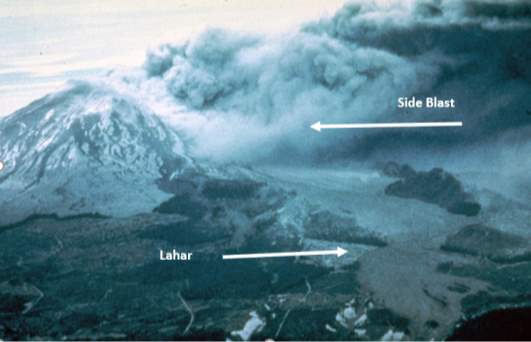 Secondary lahar triggers do not differ significantly. No volcanic activity is involved however thick post-eruption pyroclastic and tephra deposits can be mobilised during periods of heavy rain or glacial melting, and the higher the amount of available water and debris, the larger the lahar (Pierson, Wood and Driedger, 2014).

Large lahars also originate from debris avalanches and landslides that are not related to an eruptive event.  Many studies have been done on hydrothermal alteration at Mount Rainier, analysing deposits of historical lahars or mapping the extent of altered rock (Frank, 1995; Crowley et al., 1997; Watters et al., 2000; Finn, Sisson and Deszcz-pan, 2001; David A John et al., 2008; Scott et al., 2014). Hydrothermal alteration changes the composition of volcanic rocks, lowering their shear strength and increasing the risk of a collapse (Hoblitt et al., 1995). It increases the amount of clay minerals within the rock, allowing it to hold a substantial amount of water which is crucial for evolution of a debris flow into a lahar. Clay minerals are useful in analysing sediment samples of historical lahars, providing useful information for scientists investigating lahar triggers and origins (Crowley et al., 1997; Watters et al., 2000).

Cohesive lahars are known to originate mainly from large landslides and debris flows formed from hydrothermally altered rock, as described by Scott et al. (1995) using Crandell (1971) as the main source of information. Scott also states lahars of this type are capable of traveling long distances and their flow characteristics do not change during their lifespan. And since landslides and debris avalanches can be triggered by earthquake, steam explosion or simple gravitational pull and do not require volcanic eruption, it makes them harder to predict and therefore a significant hazard to life and property (Scott et al., 1995; Hoblitt et al., 1995).

Non-cohesive lahars tend to occur mainly during hydrological events, such as rainstorm or glacial outburst, as well as extensive snow and ice melting due to eruption or even a dam failure (Scott, Vallance and Pringle, 2001). Scott explains how these flows originate mainly as a water surge, by accumulating sediments then evolving to a hyperconcentrated flow (Scott and Vallance, 1995) and eventually diluting into streamflow by sediment deposition.

Lahar events at Mount Rainier are not an everyday occurrence, however it is well established that at least 55 lahars occurred at the volcano during the Holocene (Frank, 1995; Crowley et al., 1997; Vallance and Scott, 1997; David A John et al., 2008). The most significant ones include Osceola Lahar, National Lahar and Electron Lahar (Figure 6) as well as Paradise and Round Pass Lahar (Figure 7).

No doubt the most remarkable lahar in Mount Rainier’s history is the Osceola Lahar or mudflow as commonly known. It occurred about 5600 years ago on the east side of the volcano (David A. John et al., 2008). It is believed the lahar originated during an eruption as a high-water content debris avalanche or a series of, which then evolved into a massive cohesive lahar reaching well into the Puget Sound Lowland (Crowley et al., 1997; Vallance and Scott, 1997; David A John et al., 2008; Masters, 2011), inundating estimated 200km2 of land (Vallance and Scott, 1997). 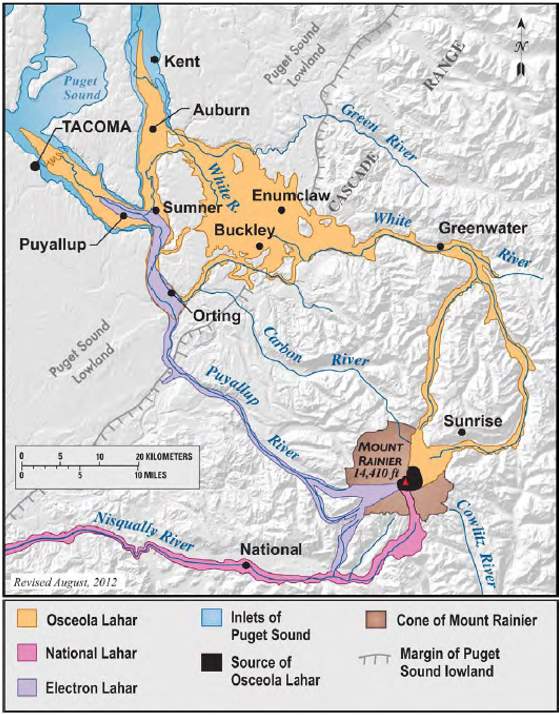 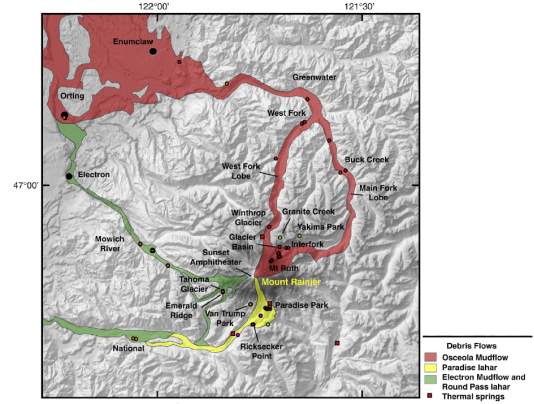 The mudflow travelled down both lobes of White River valley, where it is estimated it reached depths in excess of 100m (Vallance and Scott, 1997).

The eruption and lahar have removed Mount Rainier’s summit and a part of the volcano’s flank on the east side, leaving behind a horse-shoe crater(Figure 8) which has been slowly filling through subsequent volcanism (Sisson and Vallance, 2009).

Analyses of the Osceola lahar deposits found high clay content (around 7%) suggesting the source of the debris were highly hydrothermally altered rocks and that the alteration reached deeper than seen in similar events (Scott and Vallance, 1995). 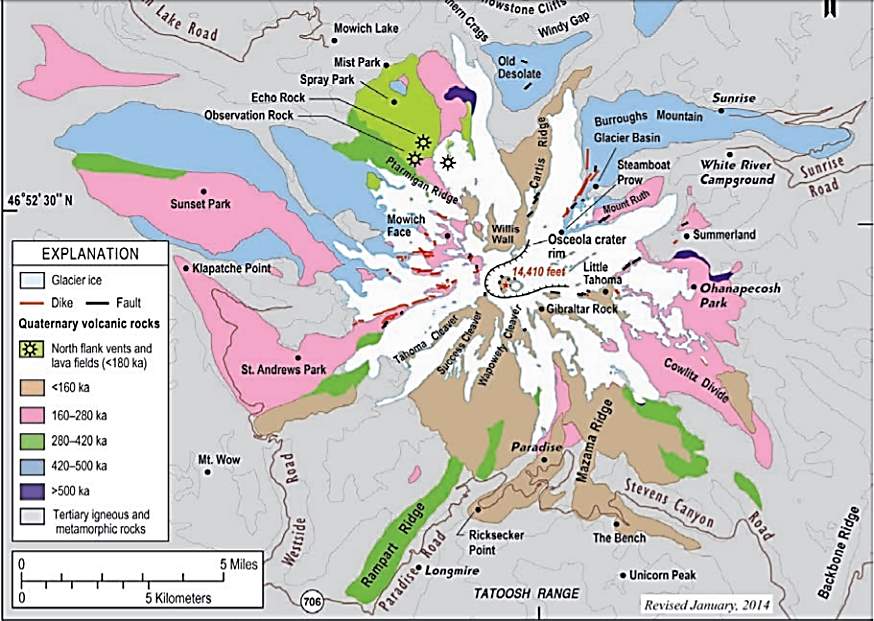 Preface The ocean is beautiful, full of colour and life… …or at least it should be. Today, our oceans are polluted by plastic put there by us. Marine life is being choked by it, we are sw...

Deterioration of Soil Strength Due to Dynamic Pore Water Pressure

AN INVESTIGATION INTO THE DETERIORATION OF SOIL STRENGTH DUE TO DYNAMIC PORE WATER PRESSURE VARIATIONS ON FINSBURY PARK STATION EARTHWORKS 1 Introduction Transportation infrastructure provides an...

The key objective of this study was to investigate whether the treatment of oil sands process-affected water (OSPW) would differ in different of constructed wetland treatment (CWT) designs....