Current available treatments for osteoarthritis (OA) are restricted to analgesics such as NSAIDs which may cause severe adverse effects after prolonged consumption. These pharmacologic treatments provide pain relief but cannot arrest or slow progression of OA. Nutraceuticals are food products that offer favorable safety profiles for long-term use and may exert disease- and symptom-modification effects in OA by suppressing activity of pathways involved in OA pathogenesis such as inflammation and catabolic activity. Drug N is a patent-pending nutraceutical formulation that synergistically targets these OA pathways. This study aimed to determine whether Drug N slowed progression of posttraumatic OA in a rat model of destabilization of the medial meniscus (DMM). Compared to placebo- and ibuprofen-treated DMM rats, Drug N-treated DMM rats exhibited:

This study provides the first direct evidence that Drug N is effective in slowing disease progression in moderate stages of OA through a broad spectrum of anti-inflammatory and anti-catabolic effects.

Osteoarthritis (OA) is a progressive, degenerative joint disease that affects more than 27 million Americans by compromising joint function and diminishing quality of life [1]. A hallmark of OA is the destruction of articular cartilage resulting in joint stiffness, swelling, pain, and loss of mobility [2]. OA is the leading cause of workplace disability and the source of $185.5 billion in annual medical care expenditures [3] The disease presents is a growing problem due to increased lifespans and increasingly obese Western populations [4]. Today, a cure for OA remains elusive [5], and there are no therapeutic agents with proven evidence that slow or halt the progression of OA [6]. As OA disease-modifying drugs are not yet available, the treatment of OA has been focused mostly managing symptoms such as pain and joint stiffness [7]. These treatments incorporate the use of pharmaceuticals such as nonsteroidal anti-inflammatory drugs (NSAIDs) [8]. However, while these commonly prescribed analgesics provide symptomatic relief, their long-term use has been associated with significant adverse gastrointestinal, renal, and cardiovascular side effects [7]. Furthermore, many existing analgesics have abuse liability and do not reduce pain in all treated individuals [9]. OA typically requires decades-long treatment, and as a result, there is an urgent need for alternative treatments that are effective and safe for long-term use.

Nutraceuticals are food or food-based products that provide physiological benefit or protection against chronic diseases. Nutraceuticals may have the ability to suppress many of the factors involved in the development and progression of OA including over-activated inflammation from pro-inflammatory cytokines (e.g. IL-6, TNF-α), and catabolic activity from proteolytic enzymes (e.g. MMP-13, ADAMTS-5) [10]. Importantly, as opposed to long-term pharmacological treatments which can result in adverse side effects, nutraceuticals are, by regulatory laws, safe for long-term use [11]. Drug N is a novel, proprietary nutraceutical formulation that was developed to target multiple factors involved in OA pathogenesis. The components of Drug N are recognized by the United States Food and Drug Administration (FDA) as generally recognized as safe (GRAS). Using a targeted screening approach, the components of Drug N were selected based on their ability to synergistically induce the expression of chondroprotective transcriptional regulator CITED2 (Cbp/p300 Interacting Transactivator with ED-rich tail 2) and reduce the expression of proteolytic enzymes and catabolic mediators involved in OA pathogenesis [12-14]. CITED2, in response to moderate mechanical loading, downregulates proteolytic enzymes ADAMTS5, MMP-1, and MMP-13 in vitro and in vivo [13, 14].

Induction of osteoarthritis in rats and Drug N treatment

Destabilization of the medial meniscus (DMM) was performed by my mentor. DMM was established in Sprague Dawley rats (3-4 months old, male, n=6/group) by cleaving the medial meniscotibial ligament (MMTL) [15]. The joint capsule directly medial to the patellar tendon was incised and exposed using scissors. The patellar tendon was retracted and the MMTL was exposed by blunt dissection over the intercondylar area. Then, the MMTL was transected, causing destabilization of the medial meniscus. A sham operation was performed on the right hind limb using the same approach, but without MMTL transection. Afterwards, the joint capsule and skin were closed by suture [16]. Starting 4 weeks following surgery, rats were subjected to oral administrations of Drug N, ibuprofen, or placebo (cellulose) once daily for 4 weeks.

Rats were sacrificed by my mentor 4 weeks following Drug N treatment. Hind limbs were fixed in formalin, decalcified in formic acid, embedded in paraffin wax, and sectioned for histology. Safranin O-fast green staining was used to visualize the integrity of the articular cartilage. OA severity was evaluated with 6-10 sections of the articular cartilage for each rat based on the Osteoarthritis Research Society International (OARSI) recommendations for histopathological assessment for OA [17]. In this system, the depth of cartilage degeneration is scored from 0 to 4 and the horizontal extent of cartilage involvement is scored from 0 to 4. The final score is product of the two factors (score range 0-16).

Immunohistochemistry was performed on deparaffinized and rehydrated sections. Primary antibodies against cleaved type II collagen (Col2-3/4, Ibex) and cleaved aggrecan (NITEGE, Ibex) were added and the sections were incubated overnight at 4°C. Subsequently, sections were incubated with anti-mouse or anti-rabbit secondary antibody (Biocare Medical) and visualized with DAB substrate (Vector Laboratories). Negative controls were prepared by staining with irrelevant isotype-matched antibodies (Biocare Medical). The immunofluorescent intensity for type II collagen or aggrecan cleavage epitopes was quantified with the RGB color system in Adobe Color Sampler [18]. The light intensity value was measured from six random locations within from the posterior to anterior direction of the femoral and tibial condyles, with three sections per rat [16]. 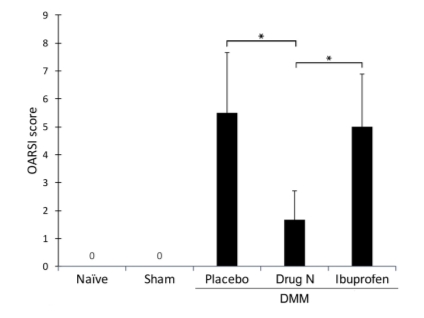 The articular cartilage matrix is mainly degraded by the proteolytic enzymes of the MMP and ADAMTS families. MMP-13 is found to be the most potent enzyme in cleaving type II collagen, while ADAMTS5 is found to be the most potent enzyme in cleaving aggrecan [20]. Immunohistochemical staining revealed that Drug N treatment significantly reduced cleavage of type II collagen in DMM rats when compared to placebo- and ibuprofen-treated DMM rats (Figure 3). Quantification of the protein immunofluorescence using randomly selected areas of the articular cartilage revealed that the intensity of type II collagen cleavage epitopes of Drug N-treated DMM rats was increased 5.12-fold above naïve rats that had not undergone surgery or treatment (P<0.05). In contrast, cleaved type II collagen in placebo- and ibuprofen-treated rats increased 11.43- and 11.55-fold above naïve rats, respectively (P<0.05). 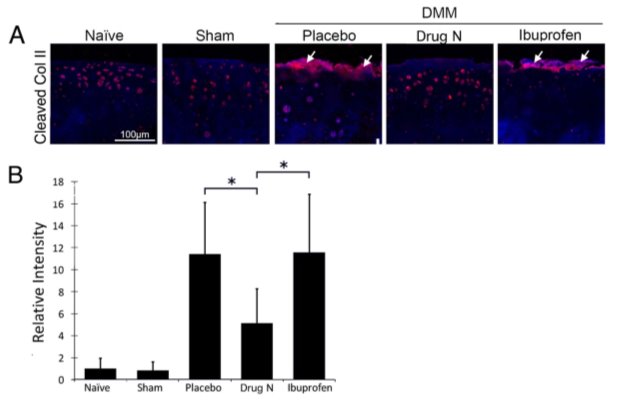 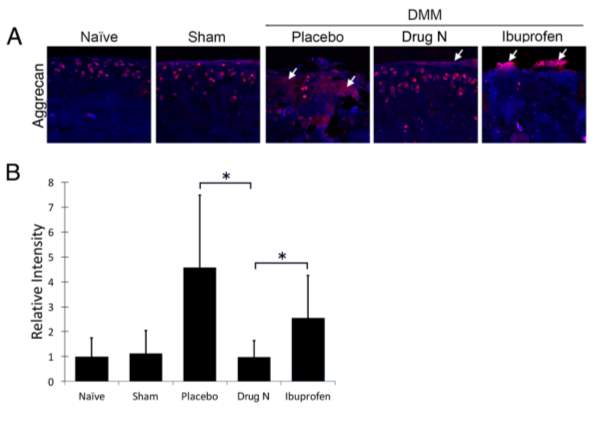 Osteoarthritis (OA) is the most common form of arthritis, and presents a huge burden on individuals as well as the economy. The mainstay of current therapy include pharmacological interventions aimed at reducing pain symptoms and improving joint mobility. Currently, there are no FDA-approved therapeutic agents that can inhibit the disease progression of OA [21].

In this study, we provide the first evidence showing that oral administration of Drug N slows posttraumatic OA progression in a DMM rat model. We showed that Drug N, when given to rats with a moderate stage of OA, mitigates OA pathology through a broad spectrum of anti-inflammatory and anti-catabolic effects. Administration of Drug N resulted in reduced proteoglycan loss, less cartilage erosion and less cartilage fibrillation (Figure 1 and Figure 2), as well as improved preservation of the cartilage extracellular matrix, which is primarily composed of type II collagen and aggrecan (Figure 3 and Figure 4). These effects are corroborated by the reduced mRNA expression levels of genes associated with cartilage homeostasis, including inflammatory cytokines IL-1β, IL-6, and TNF-α, and catabolic mediators MMP-13 and ADAMTS-5. (Figure 5). Additionally, Drug N induces MMP- and ADAMTS-repressing transcriptional regulator CITED2 (Figure 5), which in previous studies has demonstrated its pivotal role in limiting OA progression in vitro [14] and in vivo [22].

The evidence provided in this study suggest that Drug N mitigates OA pathology, at least in part, by acting as an anti-inflammatory and anti-catabolic agent. These effects are extremely valuable because tissue damage is very difficult to reverse [23]. In particular, the extracellular matrix of human cartilage does not have the innate ability to regenerate because it is devoid of blood vessels, lymphatics, and nerves [24]. Thus, the preservation of articular cartilage are paramount to joint health.

Due to the nature of OA, therapeutic drugs are likely to require long-term administration in aging population. Additionally, studies have shown that the frequency of comorbidities is very high in OA patients, and OA is often comorbid with metabolic syndrome, diabetes, and depression [25, 26]. As such, patients with OA often take medication for coexistent diseases which may adversely affect other drugs. An advantage of nutraceutical treatments, including Drug N, are their favorable safety profiles. Drug N is composed of generally recognized as safe (GRAS, and are thus well tolerated for human consumption, likely without unintentional drug interactions.

This study provides the first evidence that Drug N has significant efficacy in mitigating OA pathology, at least in part, by suppressing pro-inflammatory mediators and proteolytic enzymes, and inducing the expression of MMP- and ADAMTS-repressing transcriptional regulator CITED2. The therapeutic effects of Drug N observed in this study provide rationale for pursuing Drug N in clinical applications.

In addition to evaluating the efficacy of Drug N in a posttraumatic OA model, future studies may be conducted in order to validate the therapeutic efficacy of Drug N in other relevant OA models. Destabilization of the medial meniscus (DMM) was used in this study to surgically induce posttraumatic OA in rats. Eight weeks following the DMM surgery, rats exhibited altered joint biomechanics and pathological changes due to loss of meniscal function. These changes included cartilage erosion and fibrillation, subchondral bone thickening and formation of bone spurs, similar to symptoms observed in human OA [15]. In this study, the four-week time point following DMM surgery when the treatment began represented a moderate stage of OA, a clinical stage of disease representative of many patients seeking treatments [15]. However, there are some limitations to this acute rat trauma model. Due to the anatomical differences between rats and humans, the findings may not directly translate to humans. For example, progression of OA in humans is much slower than that in rats. Additionally, the experimental period only lasted until moderate stages of OA, so the therapeutic efficacy of Drug N in late-stage and severe OA is unknown. Future studies addressing the efficacy of Drug N on rats with late-stage OA, large animal models of OA, or other relevant models, such as spontaneous age-related OA, is of interest. If these studies validate the therapeutic efficacy of Drug N, it would provide sound rationale for advancing this potential drug toward clinical trials.

Lastly, future studies should measure the palliative effect of Drug N. Progressive joint failure accompanied by OA typically causes pain and physical disability, although the exact mechanisms are not well-understood [27]. In order for Drug N to be used as an alternative for current analgesics, it must also relieve pain symptoms and and preferably, improve joint mobility.

26. Kadam, U.T., K. Jordan, and P.R. Croft, Clinical comorbidity in patients with osteoarthritis: a case-control study of general practice consulters in England and Wales. Annals of the Rheumatic Diseases, 2004. 63(4): p. 408-414.

The aim in this review is to not only combine the effects of ZEA in animals and humans, but to also discuss the prevalence of ZEA around the world in food products, both for human and animal consumption....

In this study, I will be looking at two primary chemotherapeutic agents and the use of allogenic haemopoietic stem cell transplant and I will look at the efficacy of three epigenetic therapeutic agents....