The role of sunlight in the causation of Melanoma

With the continually growing prevalence of melanoma cases in the UK; it is important to study the epidemiology of cancer. In doing so and raising awareness of the subject, medical professionals can tackle and stagnate the rise in incidents. 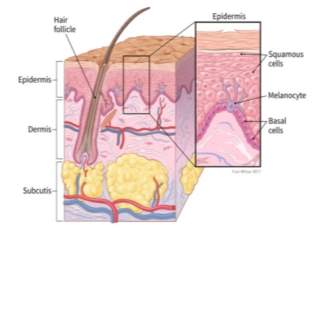 Melanoma is the most fatal strain of skin cancer. It forms in the melanocyte cells found between the dermis and epidermis of the skin. The melanocytes produce a dark pigment called melanin which has two functions. Firstly, the concentration of the pigment determines the colour of the skin. Secondly and most importantly, melanin is used to protect against the damage of Ultra Violet (UV) radiation. The melanocytes will release ‘packages’ of the melanin pigment, called melanosomes, to adjacent keratinocyte (epidermal) cells (Chamani, 2014). These melanosomes overlay the nuclei of the keratinocytes to act as a shield from UV rays. In cases where the skin is exposed to significant damage, for example during wound healing or following exposure to UV radiation; much more melanin is required. Under normal circumstances, the production of melanin is not constant. Increasing the mitosis of melanocytes, which in turn increases the yield of melanin, is significant. The consequence of which could be uncontrolled and unlimited mitosis, a sign of metastatic growth (Kroon, Morton, & Thompson, 2004). The increased melanin in these circumstances causes the pigmentation of the skin which is a visually identifiable feature of melanoma. The abnormal cell growth is the basis of melanoma.

It is important for melanin to protect the skin cells from the direct damage that UV rays from sunlight can do to the cellular DNA of the skin. Specifically, longwave UVA (400nm-320nm) and shortwave UVB (320-290nm) can on a superficial level, aesthetically and on a more significant molecular level, damage the skin. Typically, UVA is known to penetrate deeply into the skin into the keratinocytes of the lowermost epidermal layer (D’Orazio, Jarrett, Amaro-Ortiz, & Scott, 2013), it is the main cause of aging and wrinkling of the skin (Mac-Mary et al., 2010). Meanwhile, UVB is responsible for skin tanning and burning. The short waves of the UVB rays will mostly reach only the surface of the epidermis, where it is absorbed by the tissue.

In the normal cell cycle of melanocytes, UV radiation stimulates mitosis of the melanocyte cells as well as the synthesis and secretion of melanin. After this peak in activity, the number of melanocytes and rate of melanin production should be returned to the normal levels. The absorption of UV rays triggers the synthesis and secretion of α-melanocyte stimulation hormone (α-MSH). This hormone when bound to melanocortin-1, a melanocyte cell surface receptor, causes a cascade of enzyme controlled reactions via the cAMP pathway. The release of protein kinases A due to this pathway phosphorylates the transcription factor CREB, activating it which in turn will activate microphthalmia-associated transcription factor (MITF). It is MITF which is directly responsible for the increased synthesis of melanin, as it heightens the effects of melanogenic enzymes.

The absorption of UV rays by the skin will also stimulate the release of the p53 transcription factor. Normally, the function of p53 is to pause the progression of the Gap 1 (G1) and Gap 2 (G2) stages of the cell cycle. It does so by combining with retinoblastoma protein (pRb) an important cell cycle regulator.

However, UVB irradiation induces the expression of the of cyclin-dependent kinase (cdk) inhibitor, p21. This inhibitor prevents the phosphorylation of the p53 transcription factor at serine 15. Therefore, UVB inhibits apoptosis by preventing the expression of p53. The division of melanocytes will not be infinite, due to cell senescence (the average population doubling limit for cells in an adult is 20-30). However, in the time DNA has been exposed to the UV rays, irreparable damage may have occurred, giving rise to mutated, malignant cells (Kroon et al., 2004). This process presents the idealistic conditions for a melanoma to form.

The prevalence of melanoma in the UK

Statistics provided by Cancer Research UK, based on studies carried out by the Office for National Statistics amongst others; show the number of new melanoma cases registered in 2015 was 15,906. This made melanoma the fifth most prevalent cancer type in the UK in 2015, a trend which has continued in recent years. Whilst melanoma is the fifth most occurring cancer for men and women alike, it has also been found that there are higher numbers of melanoma cases in males than females. 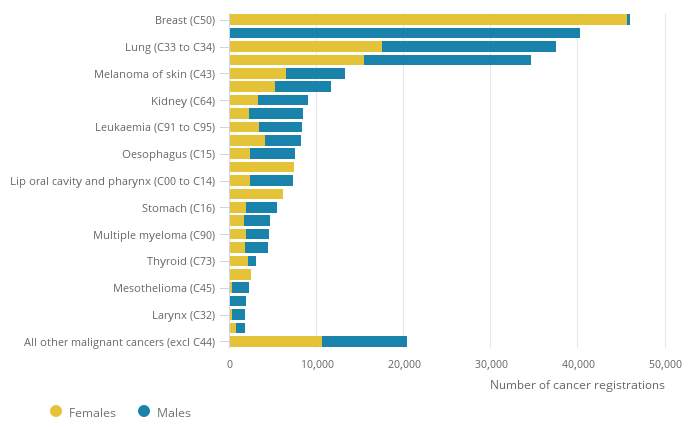 Figure 2: A statistical graph indicating the number of new cancer cases registered in 2015 by the 24 major sites (Office for National Statistics, 2017)

The Incidence of melanoma across different demographics 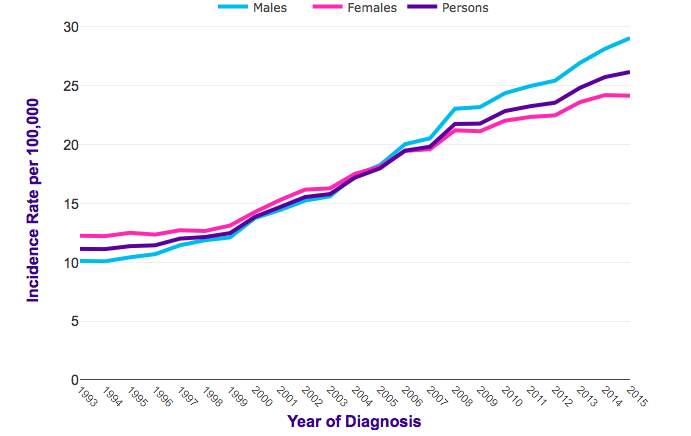 Figure 3: A statistical graph showing the trend of incidence in melanoma cases in the UK between the years of 1993 – 2015 (Cancer Research UK, 2015)

In statistics presented by Cancer Research UK it was shown that there was an average increase of melanoma incidence by 128% between the years of 1993 and 2015.

It is key to note that there is a widening gap between the number of men being diagnosed with melanoma than women. In 1993 there was a 2% gap between men and women (12% and 10% respectively). Whereas in 2015 the gap was wider at 5% between men and women (29% and 24% respectively). In a 2016 study carried out by the American Academy of Dermatology it was concluded that lifestyle choices played a major role in this disparity. 76% of women knew “there’s no such thing as a healthy tan” compared to 56% of men (American Academy of Dermatology, 2016). In a prior 2015 study it was found that a greater percentage of men than women claimed they “would never use sunscreen” (43.8% compared to 27% respectively). From this information, we can deduce that men don’t know as much about skin cancer prevention than women do. Therefore, are not taking the steps necessary to protect themselves.

Due to the beauty standards of society, women tend to wear makeup that contains high SPF or use products with high SPF more regularly than men so in turn are more protected against the effects of UV rays.

However, this study is not perfect. The author claims “skin cancer can affect anyone, regardless of age, race or gender”. Whilst it is true that anyone could develop melanoma, it is important to take race and age into account when carrying out these studies; which has not been done here.

In a study conducted between the years 1982 and 2011 of the percentage of U.S. adult patients with primary cutaneous melanoma, the variable of ethnicity was analysed. For the incidence of in situ melanoma (found on the epidermis of the skin) it was found that 33.4% of non-Hispanic White had developed the diseased. This is much higher than the 27.9% of Hispanic and 12.1% of non-Hispanic Black who had developed the disease (Ward-Peterson et al., 2016). This shows that race must be taken into account when carrying out demographic melanoma studies. As the colour of someone’s skin, relating to the amount of melanin present, affects the likelihood of melanoma developing. This study was carried out over an extended period of time, with a large sample size of 185,219. This study is reliable as the sample size allows the results to give a precise mean. This is because, any anomalies are likely to be removed and extremities are less likely to have an effect on the average. Furthermore, this sample size is a good representation of the population. Therefore, we can accept this study as reliable and trust the data. The patients used were taken from the “National Cancer Institute’s Surveillance, Epidemiology, and End Results (SEER) Program.”

In comparison, the results of the American Academy of Dermatology are less reliable. It does not take into account the effect of race and age which are known to affect the incidence of melanoma. There is no indication of the sample size and whether or not the patients have been randomly selected. Therefore, there may be biases which have skewed the results. The results cannot be fully dismissed, however further research must be conducted in order to support their claims.

Based on the study carried out on the percentage of U.S. adult patients with primary cutaneous melanoma, we can conclude genetics play a role in melanoma development. For those living in the same environments, receiving the same UV radiation, to have a different risk level of developing melanoma based on their ethnicity, means there must a genetic component involved.

Factors affecting the susceptibility to melanoma, such as immunosuppression (the body’s suppression of an immune response) and sun sensitivity, are linked to genetic characteristics (Miller & Mihm, 2006).

The greater cases of melanoma in non-Hispanic White groups compared to people of colour, can be majorly attributed to a lower concentration of melanin. This is because melanin deflects twice as much UV radiation (Bradford, 2009), therefore a lot more sunlight is absorbed by the epidermis of Caucasian skin.

There are case studies suggesting the genetic significance of melanoma across different ethnicities. However, there is limited research that provides a detailed explanation into why people of colour have lower rates of melanoma compared to white people. More research has to be conducted to explain these differences to see if there is sole a genetic or environmental influence or number of different factors. Once we have these results then this data can be more reliable

High risk genes associated with melanoma are those which when mutated correlate to a high risk of developing the disease. This is especially true when looking at the mutated gene which arises in a family history. This shows the disease is more likely to arise if the gene has been inherited and there are cases within the family.

One such gene is “cyclin-dependent kinase inhibitor 2A (CDKN2A)” whose function is containing the genetic information needed to transcribe tumour suppressor proteins such as p16INK4A and p14ARF. These proteins prevent the gap phases in mitosis from occurring by inhibiting pRb. Mutation of CDKN2A prevents the gene from being subscribed. This inhibits the body’s defence mechanism in stopping uncontrollable cell growth. Mutations in CDKN2A have been found in up to 20% of melanoma susceptible families (Potrony et al., 2015).

A study was carried out by the American Society of Clinical Oncology between the years 1989 to 2009 (20 years). It evaluated the risk effect of developing skin cancer in later life for those who used tanning beds in teenage and young adult years. The patient cohort included “73,494 female nurses” of varying ethnic backgrounds across the United States. This sample population makes for reliable experiment conditions. Due to all the patients being female nurses, they will have similar lifestyles. This would eliminate disparities caused by different environmental factors, such as exposure to the sun. Furthermore, eliminating men from the removes extreme results as men have a higher chance of developing melanoma. Finally, the large sample size removes anomalies and extremities are less likely to have an effect on the average.

What is radiation Radiation is the emission of energy in the form of rays or waves and is classified into two categories; ionizing and non-ionizing. This classification is dependent on the amount of ...

HRT And The Risk Of Breast Cancer

HRT And The Risk Of Breast Cancer. Methodology is the set of principles of research that guides the researcher to decide the type of research method which would be most appropriate......